As Biden passes the buck to the do-nothing Fed, inflation rises and wages fall

This is the thirteenth month in a row that earnings have slipped behind price inflation, with inflation remaining above 40-year highs. That is, for more than a year, ordinary people have been getting poorer.

In America, inflation is so high that if it doesn't exceed 8.5 percent, we're meant to believe it's "moderating." That was at least the subtext in much of yesterday's conjecture about the Consumer Price Index inflation data for April. Much of the "consensus" was that inflation would be around 8.0 percent, that inflation had peaked, and that it would thus moderate. It's too soon to say if inflation has peaked, but one thing is certain: there's no cause to rejoice about another month of wealth-destroying inflation at levels not seen in decades. After all, in our modern economy, once purchasing power is lost to inflation, it is lost forever. The central bank will never allow inflation to endure for an extended length of time, so that dollar holders will never regain buying power. 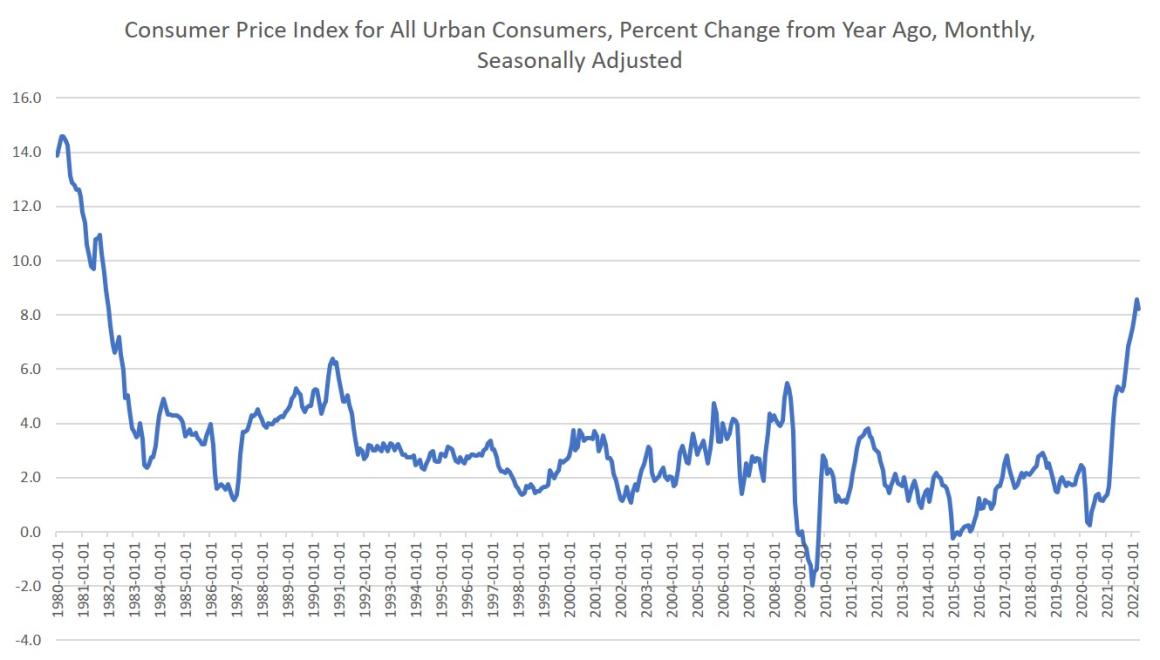 As it is, the Bureau of Labor Statistics’s new official inflation numbers today showed an 8.3 percent year-over-year increase for April. This is the second highest amount in forty years, but it is down somewhat from March's 8.6% year-over-year inflation increase. Food, energy, automobiles, and transportation all contributed to price increases. Food prices up 9.4% year over year in April, while energy prices increased 30.3 percent. Used vehicles increased by 22.7 percent. All items, except food and energy, increased by 6.2 percent.

Yet again, wages were not keeping up. In April, year-over-year growth in average hourly earnings were up 5.4 percent. However, this is down from the 5.6 percent increase in March. The difference between earnings and inflation now stands at –2.8 percent. Earnings have now slipped behind price inflation for the twelfth month in a row.

That is, for more than a year, ordinary people have been getting poorer. The cost of groceries has continued to rise, and the price of gasoline, while unpredictable, is not on the decline. In May, gas prices have reached fresh highs. The national average for gas prices hit $4.37 per gallon on Tuesday. 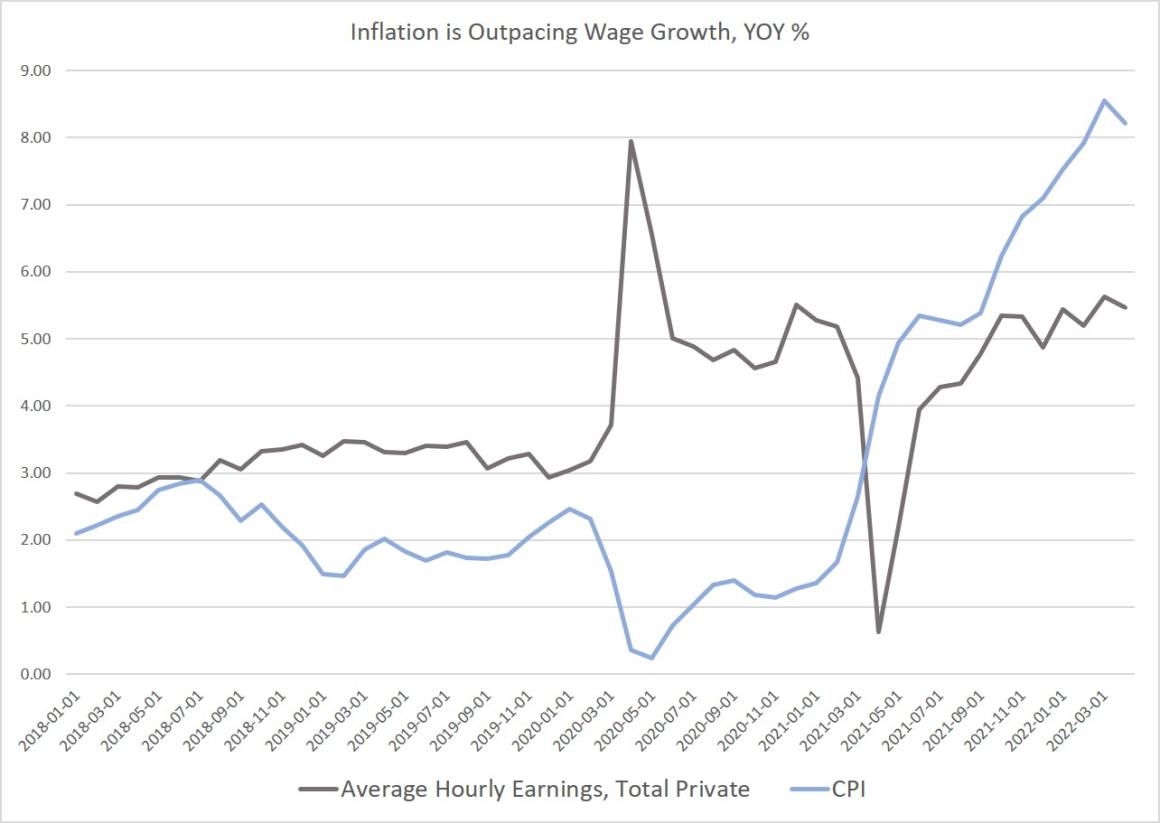 In April, the misery index, which combines unemployment and inflation, reached 11.8 points, the fourth highest level in more than a decade. Low unemployment figures have been trumpeted by the White House and regime supporters, but with salaries that can't keep up with inflation, low employment rates aren't translating into true wealth creation. Some workers may be picking up on this, since labor force participation in the 25–54 age range has still not returned to 2019 levels. 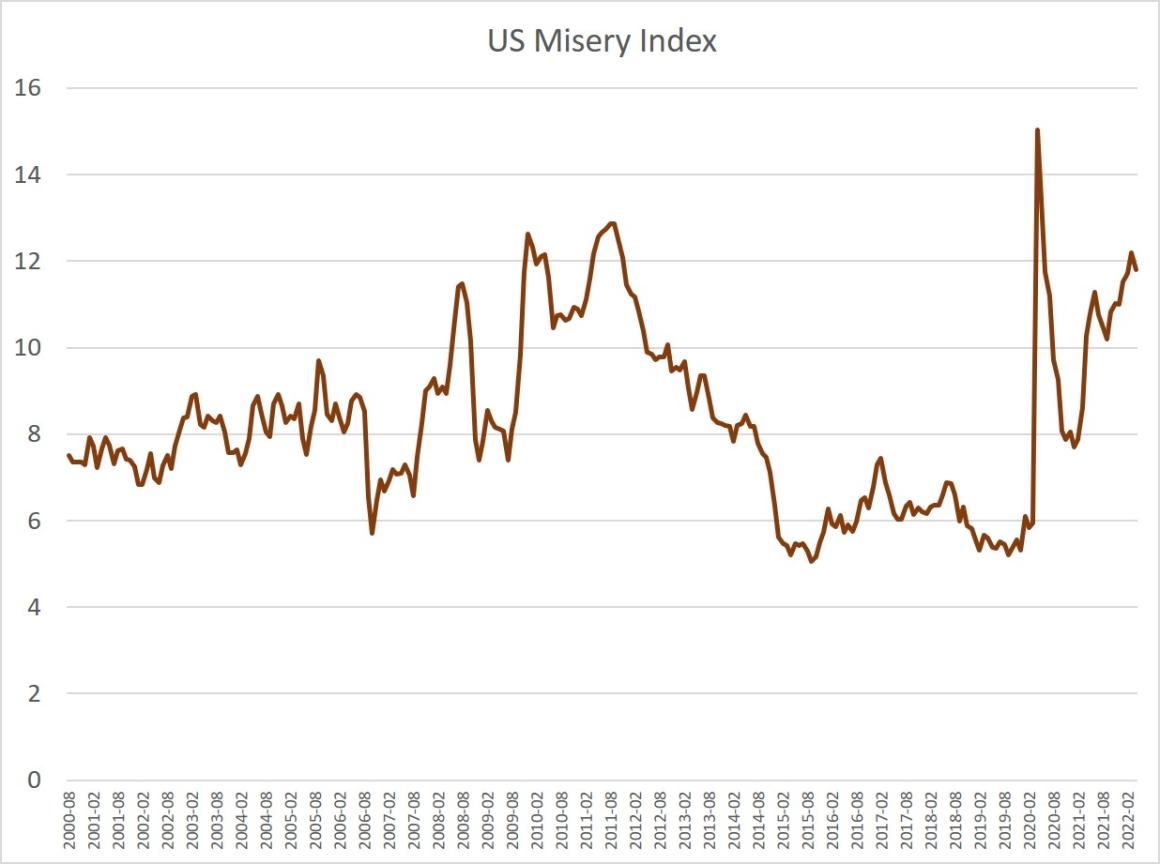 The news was grim enough that the White House put out a new statement on inflation this morning:

While it is heartening to see that annual inflation moderated in April, the fact remains that inflation is unacceptably high. As I said yesterday, inflation is a challenge for families across the country and bringing it down is my top economic priority.

This starts with the Federal Reserve, which plays a primary role in fighting inflation in our country. I thank the Senate for confirming Dr. Lisa Cook to the Board of Governors last night, and urge the Senate to confirm my remaining nominees without delay. While I will never interfere with the Fed’s independence, I believe we have built a strong economy and a strong labor market, and I agree with what Chairman Powell said last week that the number one threat to that strength – is inflation. I am confident the Fed will do its job with that in mind.

Beyond the Fed, my inflation plan is focused on lowering the costs that families face and lowering the federal deficit. Already this week, my Administration has announced new steps in partnership with the private sector to lower the price of high speed internet for tens of millions of Americans.

In a similar address yesterday, Biden busied himself with blaming Moscow and covid for inflation. In this new statement, Biden essentially says that inflation is the responsibility of the Federal Reserve, and then moves on to listing the welfare that the administration is planning for constituents.

Biden, on the other hand, claims fictitious "Fed independence" to explain why he can't directly address inflation. To say the least, this is a clever ruse. However, Fed independence has never existed, and it's long been evident that the White House, regardless of political party, routinely presses the central bank to keep the easy money flowing in order to maintain high official GDP growth numbers. From the perspective of elected leaders, this is good politics.

Unfortunately for Biden, consumer price inflation has now caught up with the previous decade's rampant money creation and can no longer be ignored. The Fed and the federal government are under pressure to "do something" about inflation as a result of this. The central bank may be forced to eventually rein on money creation by allowing interest rates to increase and reducing money-creating asset purchases as a result of this political reality. This is bad news for the ruling party because such measures will almost certainly trigger a recession.

Even now, with price inflation near four-decade highs, the Fed is unwilling to take anything except the tiniest, most cautious moves toward limiting inflation-inducing monetary expansion. The Fed has been talking about addressing inflation since late last summer, yet it’s now May 2022 and the Fed has still not executed a reduction in its balance sheet—which would shrink the money supply and lower asset price inflation—the target federal funds rate remains near historic lows. This is not a "autonomous" Federal Reserve. This is a Fed that is trying to lower inflation without upsetting the political apple cart. There's also limited room for error, given that the economy shrank in the first quarter of this year and signals point to more downturn ahead.

However, there is one thing the administration can do to reduce inflation directly: cut deficit spending. This would relieve political pressure on the Fed to keep interest rates low in order to keep the government debt servicing low. Interest rates would likely rise faster as a result, and inflation would be (slightly) contained. Cuts to federal spending are unlikely, especially with both parties preparing to increase federal military spending dramatically.
=====

More from: Ryan McMaken
1
As Biden passes the buck to the do-nothing Fed, ...
2
The Federal Reserve's New 'Tightening' Plan Is Far Too ...
3
Biden Admits That Sanctions Are Ineffective and Cost Us ...
4
Will Biden Sanction Half of the World in an ...
Filed under Biden ,  government ,  economic ,  Inflation ,  Bidenflation ,  Cost of Fuel ,  minimum wage ,  FED