Home prices can't keep going up like they have in the past few years without the central bank continuing to give out easy money, and this is clear.

Home prices can't keep going up like they have in the past few years without the central bank continuing to give out easy money, and this is clear.

In August, home prices kept going down because the economy was getting worse and the Fed stopped quantitative easing while letting interest rates go up. According to new data from the S&P CoreLogic Case-Shiller Home Price Index, home prices were 13.0% higher in August than they were in August 2021. That is less than the annual gain of 15.6% in the previous month. This is a big drop, and on Tuesday, CNBC said, "The 2.6% difference between those monthly comparisons is the largest in the history of the index, which began in 1987." This means that price gains are slowing at a record rate. A Case-Shiller spokesman said that the new trend was "forceful deceleration in U.S. housing prices" and that "price gains slowed in every one" of the twenty cities where the survey was done. Every city in the index saw a bigger drop from the same time last year to August than from July to August. (When the numbers were adjusted for the time of year, the drop from one month to the next was the biggest since 2009.) 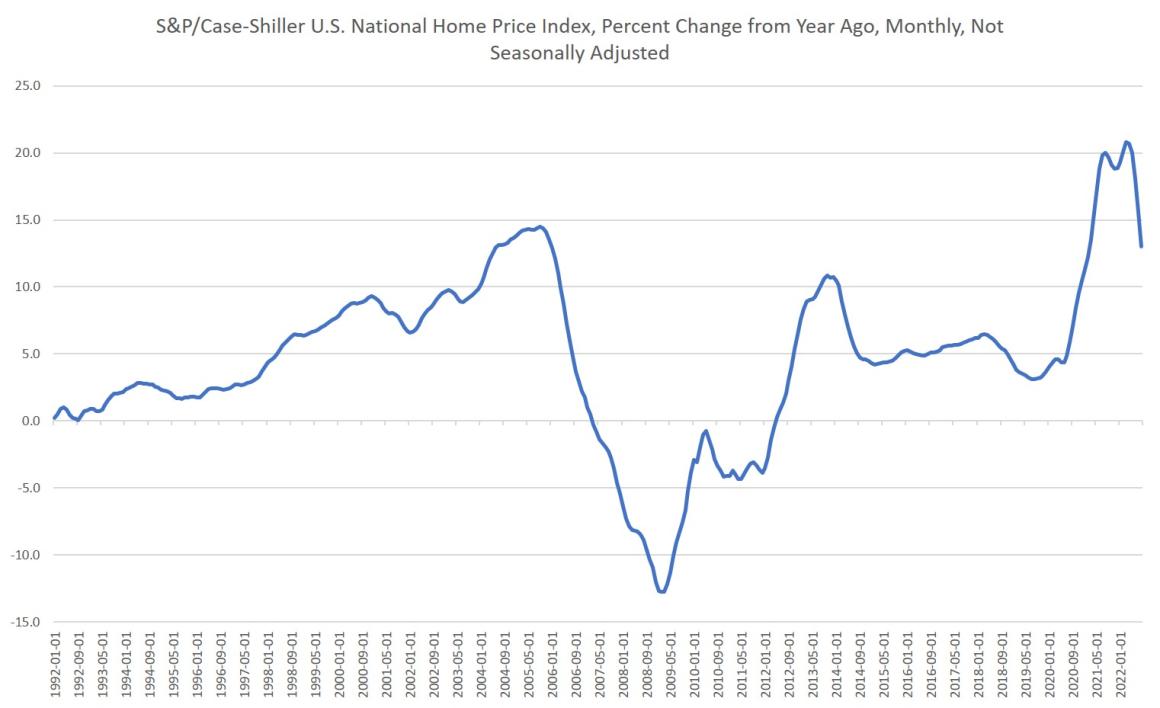 But even with this fast slowdown, the year-over-year growth is still about the same as it was in 2005, when the last housing boom was at its peak. In September 2005, year-over-year growth peaked at 14.5 percent, but by March 2007, it was negative. The current cycle of home price growth seems to have reached its peak in April of this year, when prices went up by 20.8%. Since then, prices have dropped quickly.

This is because home sales have been going down, which has mostly been blamed on rising interest rates. For example, the number of homes that were under contract in August fell by more than 24 percent compared to the same month a year earlier. The average rate for a 30-year fixed mortgage went up from 4.99% to 5.66% between August 4 and September 1. The average rate for the year 2021 was 2.96 percent.

In other words, the average mortgage rate in August was twice what it had been in 2021. This made mortgages more expensive, and monthly payments were much higher. At 3 percent, the monthly payment on a $300,000 loan is $1,265, and at 6 percent, it's $1,799. Obviously, that will cause prices to go down and drive some people out of the market altogether.

So, it's not wrong to say that higher interest rates have contributed to lower home prices and fewer sales. But there is a bigger issue here, which is how easy money affects the prices of assets. Brendan Brown has been saying for years on mises.org that the most noticeable effect of monetary inflation (also called "easy money policy") over the past twenty years has been rising asset prices. High levels of inflation in consumer prices are a much more recent thing. Brown has pointed out that prices have been going up a lot for a long time, but it's been in assets instead of consumer goods.

Since at least the start of the Greenspan put in the late 1980s, stock prices and prices for homes and other real estate have gone up as the money supply has grown. In fact, the Case-Shiller index shows a strong link between the amount of money and growth. At least a year passes between a rise in the money supply and a rise in home prices, so I moved the home price growth numbers up by a year in this graph: 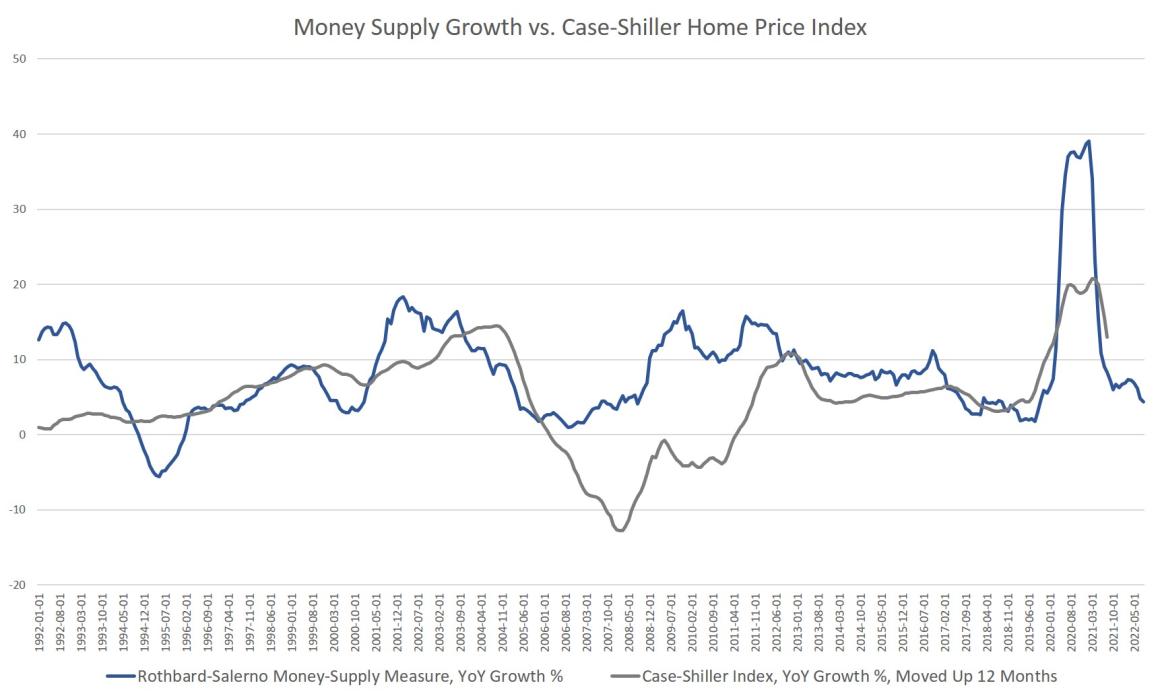 After all, when the Federal Reserve wants to boost economic growth, it lowers interest rates. This makes it possible for home buyers to get bigger loans and pay higher prices for homes, which boosts economic growth and home prices. Through the commercial banking sector, this leads to more money inflation, which in turn leads to more asset price inflation. But when the Fed buys more mortgage-backed securities, it directly creates new money. This adds to the rise in asset prices (MBS). To keep asset prices up, the Fed just makes new money electronically and then buys more housing debt. It has been doing this since 2009, and it makes it much less risky for the private sector to put more money into mortgages. So, institutional investors will also put more money into the housing market, which will drive up prices even more.

So, for the gravy train to keep going, the housing market needs a lot of new money and for the central bank to keep playing with interest rates. Since the Fed has cut back a little on buying MBS and is letting interest rates go up, home prices are falling quickly. They will probably keep going down until the Fed gives up on its fight against Consumer Price Index inflation and gives in to easy money again.

More from: USAGAG
1
The cryptocurrency exchange Bitfront closes
2
FTX put your cryptocurrency in a 'crypt,' not a ...
3
The energy industry will not be fixed by subsidies
4
Twitter Is Too Musk to Fail
Filed under FED ,  Central Banks ,  easy money ,  home prices

Most Popular This Week
1
The cryptocurrency exchange Bitfront closes
2
FTX put your cryptocurrency in a 'crypt,' not a ...
3
The energy industry will not be fixed by subsidies
4
Twitter Is Too Musk to Fail
5
Elon Musk criticizes Alyssa Milano for trading in her ...
6
Not Just Recession
7
How easy money led to the fall of the ...
8
How do we keep Billion-Dollar Boy-Men from hurting us?
9
About That Nobel Prize: Diamond and Dybvig's Banking Theories
10
The economy is in a mess. What will we ...