Wall Street wants to raise the target inflation rate above 2%. This is not a surprise

The Fed can't go bankrupt, but it can bring the country to its knees

Wall Street is sure that the Federal Reserve will soon create a 'soft landing' by reducing inflation without triggering a recession. They must reconsider their convictions.

Investors are eagerly awaiting any indication that Fed central planners may one day "flip" from rising interest rates to reducing them. They forget that recessions and big stock bear markets have occurred after the Fed began reducing rates and the yield curve spread turned positive.

The Fed has made it quite apparent that they now adhere to the "old-time religion" of former Fed chairman Paul Volker in order to combat the inflation they caused by increasing the money supply by 40 percent in 2020 in response to the covid crisis. Before they will even consider decreasing interest rates, they insist that inflation must obviously slow to their arbitrary 2 percent target (which halves the value of the dollar every thirty-four years). They claim to have learnt from the error of the 1970s that reducing interest rates too soon before the struggle against inflation is won will likely prolong the suffering of high inflation.

The trillion-dollar question is: when will inflation clearly slow toward 2 percent?

No one can say for sure, particularly Fed bureaucrats who have proven their inability to predict anything. But a recently published paper by investment research firm Research Affiliates attempts to answer this question by looking at prior historical periods of high inflation. This paper, titled “History Lessons: How ‘Transitory’ Is Inflation?” Analyzed all cases where inflation rose above 4 percent in fourteen developed countries from January 1970 through September 2022.

History Lessons for the Fed and Investors 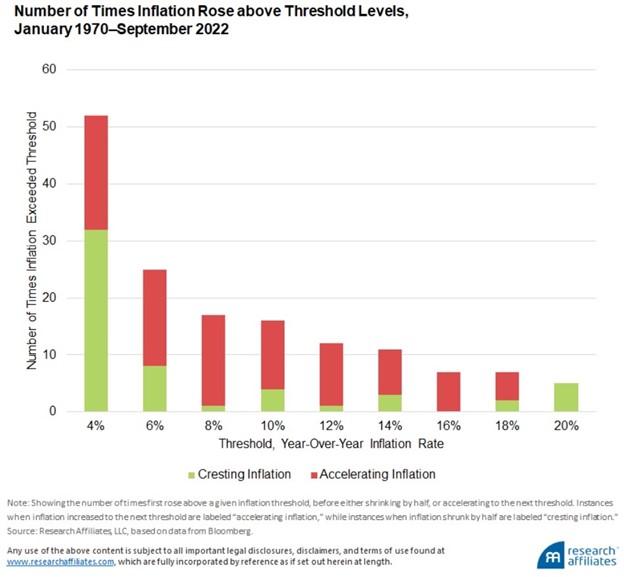 The graph below shows the median number of years it took for inflation to fall in half after it reached a given level. The shaded area shows the range for 60 percent of the outcomes, excluding the top 20 percent and bottom 20 percent. 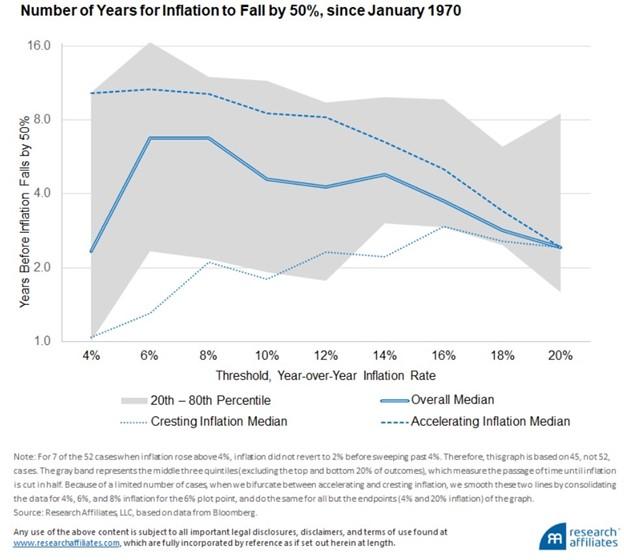 When inflation was already crossing 4 percent in April 2021 (2 percent of which was in the prior three months, which was an 8 percent annualized rate!), what were Powell and Yellen thinking in declaring the inflation transitory? Should we consider a median expectation of 2½ years to revert to a 2 percent inflation rate as transitory? 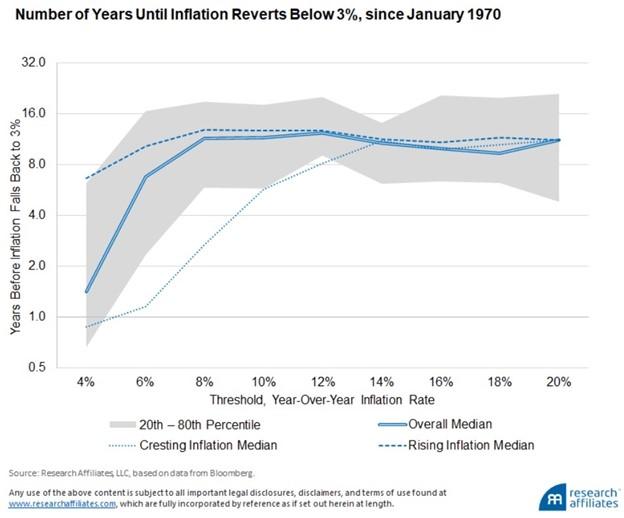 Since US inflation rose above 6 percent a year ago and above 8 percent eight months ago, history says the median number of years for inflation to fall below 3 percent is ten years, with a 60 percent percentile range of six to nineteen years! Clearly, the Fed and investors are not prepared for such a possibility. 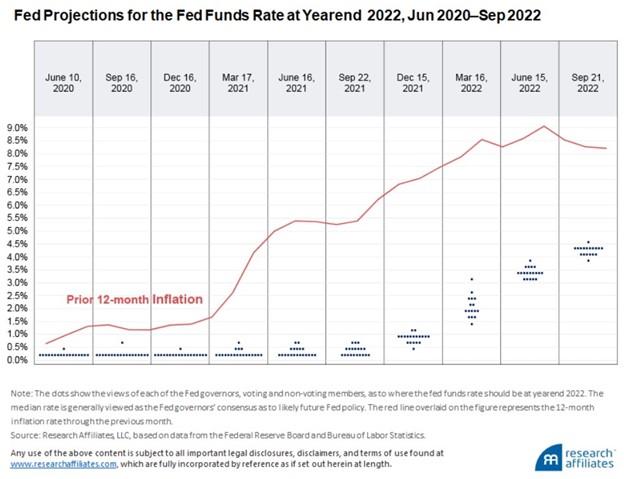 US Inflation History Supports This Conclusion

The chart below shows US inflation since the Fed was created in 1913. The US dollar has lost 97 percent of its value since then, as cumulative inflation has been over 2900 percent. The horizontal red line shows five periods prior to now when inflation rose well over 7 percent. The first instance was caused by money printing for World War I, which resulted in the highest inflation rates in modern US history at over 20 percent. It took about four years for inflation to return to 2 percent after that. Then there were three instances during the 1940s and 1950s when it took two to three years each time for inflation to return to 2 percent.

Does the current Fed chair, Jay “Wrong-Way” Powell, have the fortitude to do that in the face of a recession?

Federal Bureaucrats Are to Blame for Our Falling Living Standards

The authors of this study concluded by blaming Federal monetary and fiscal bureaucrats for this colossal mistake that is lowering our living standards:

It was a mistake for the Fed to declare inflation transitory when it was rising rapidly and when history tells us that, even at a relatively modest 4 percent rate, it often is not transitory. The Fed inflicted serious damage, both to the macroeconomy and to its own credibility, by following a too-easy policy for a dozen years and then continuing its transitory messaging as inflation lofted past 6 percent, then 8 percent. The same messaging continues today, albeit in different words. . . . Is it possible that inflation will recede to 4 percent and then to 2 percent in the coming year or two? Of course it’s possible! History says it is unlikely. . . . Our fiscal and monetary policies have done far more harm than good in recent years. . . . We perceive a resistance to alternative views, in both fiscal and monetary circles, a desire to create an echo-chamber of similar views, and a reluctance to learn from past mistakes. We are fools if we allow our hopes for a rapid dissipation of inflation to become our central expectation.

Two variables contribute to price inflation: 1) money supply and 2) money demand, which is influenced by inflationary psychology. The increase of the money supply has already decreased from 40 percent in 2021 to less than 3 percent currently. But money demand will rely on how confidence the public is that Powell and his fellow government central planners will battle inflation aggressively, despite the likelihood that a recession has already begun.

History and Powell's incessant flip-flopping indicate that it will likely be at least a year and possibly more than a decade before inflation returns to the Fed's 2 percent target. Rather than relying on government bureaucrats to save them from the reduced living standards produced by excessive inflation, individuals must take measures to safeguard themselves.

Most Popular This Week
1
The government will make you even poorer
2
The Patsy of the Great Depression
3
How to Make Excellent Choices Rapidly
4
Bill Gates says that people with these three skills ...
5
For the kids, let's do it
6
Targeting inflation and keeping prices stable have problems and ...
7
The Georgia electric vehicle plant has been called the ...
8
Congress and the Federal Reserve could be putting us ...
9
A Crisis Made in the World
10
Americans Have Finally Discovered Where Makes Them Happy