After pleading guilty to assisting North Korea in evading US sanctions, a Bitcoin expert was sentenced to more than five years in prison.

Virgil Griffith, a former Ethereum Foundation cryptocurrency scientist, told a federal judge in New York on Tuesday that he "arrogantly and erroneously" believed he knew more than US authorities, people at his company, and his family, all of whom tried to persuade him not to attend a 2019 blockchain and cryptocurrency conference in Pyongyang, North Korea. 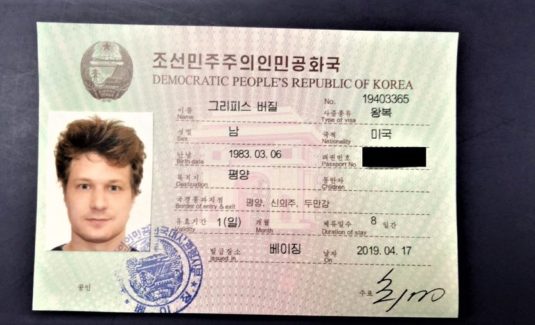 Griffith, who pleaded guilty in September to one count of conspiracy to violate the International Emergency Economic Powers Act, received a 63-month sentence from US District Judge P. Kevin Castel. Griffith had requested only two years in prison, but the judge denied his plea, saying in a Manhattan hearing that he had shown "a clear, willing intent to breach the sanctions regime."

Griffith, 39, went to the conference despite State Department advice not to. In November 2019, he was arrested in Los Angeles on charges of giving technical blockchain information to dictator Kim Jong Un's regime, which prosecutors claimed might be used to assist the North launder money and avoid sanctions.

Castel explained the sentencing by referring to photos of Griffith and an alleged co-conspirator at the conference who demonstrated how to convert North Korean dollars into cryptocurrency to avoid sanctions. Griffith appears in the images wearing a North Korean-style outfit and standing in front of a white board with a grinning face and the words "No sanctions yeah."

In exchange for a plea deal, prosecutors agreed to seek no more than 6 1/2 years in jail for Griffith. Griffith has been in federal detention since July, when his bail was revoked by Castel, who claimed that a rise in the value of his bitcoin assets provided him with the means and desire to run.

Griffith's lawyers told the judge that he had obsessive compulsive disorder and narcissistic personality disorder. He was infatuated with North Korea and believed he was acting in the interests of peace, "arrogantly and naively."

In a statement to the judge before his sentencing, Griffith wrote, "I love my country and did not set out to do anything to hurt it."

Griffith's actions, according to a US prosecutor, were well-planned and "hit at the heart" of North Korea's sanctions campaign.

"We are all witnesses to a war fueled by a dictator's whim," Assistant US Attorney Kimberly Ravener told the judge, alluding to Russia's conflict in Ukraine. "Sanctions have been our main tool."

Griffith was the subject of a 2008 New York Times Magazine story that called him the "Internet Man of Mystery" and labeled him as a "cult hacker."

More from: USAGAG
1
There was no 'Attack' on Terra
2
Terra's revised recovery plan would reduce post-attack UST holders' ...
3
Using crypto as a form of currency to manage ...
4
Musk requests that the SEC investigate the amount of ...
Filed under Bitcoin ,  Crypto ,  cryptocurrencies ,  North Korea ,  sanctions ,  Virgil Griffith