Russian Weaknesses and Russia's 'Threat' to the US and Western

No, it's not the Putin Price Hike, despite Joe Biden's claims

The present proponents of US aggression towards Russia would have us think that Russia is a peer of the US and Western Europe.

Despite Russia's modest economy, Tom Rogan of the hardline Washington Examiner argues that Russia is a "great power," presumably similar to the United States.

Furthermore, as Ted Galen Carpenter points out, hawks often refer to current Russia as if it were the same as the Soviet Union, a state that was far bigger and more populated than present-day Russia. The Soviet Union, like Russia, was established on authoritarian philosophy.

That type of stuff could be credible to older readers. After all, many people of a certain age still live in the past, in the days of the Cold War, and see the Soviet Union as it once was: a state three times the size of the United Nations, with satellite states extending deep into Central Europe.

Even back then, the old Cold Warriors were mistaken when they claimed that there was a "missile gap" with the Soviets and that the Soviet economy was a juggernaut that could compete with the Western market economies. The missile gap was a hawks' fiction, and the Soviet economy was a shambles, despite the CIA's always-behind-the-curve belief otherwise. Interventionists were incorrect about the Soviets back then, and they are still wrong about Russia now.

In reality, when we examine Russia's demographic, economic, and military realities, we see that it lags well behind the US, and the West in general.

Let us begin with the only one in which the Russian government may be regarded a peer of the US dictatorship: nuclear weapons. In his Examiner piece, Rogan makes a point of ignoring practically every genuine measure linked to Russia's population or military budget. Rather, he cites just one fact to support his point: the Russian state has hundreds of nuclear weapons.

This is correct, given that Russia possesses around 6,200 warheads against the US's 5,600. However, in terms of strategy, this distinction is meaningless. Both the United States and Russia have nuclear triads and second-strike capability, implying that they have more than enough for deterrence. Furthermore, the point at which a nuclear arsenal achieves deterrence capability is closer to "dozens" rather than "thousands." The fact that the United States and Russia both have thousands of warheads is a result of Cold War public relations, paranoia, and internal political pressure to build greater arsenals. Russia is not "more powerful" just because it has more nuclear weapons. Both the United States and Russia are more than capable of annihilating the globe many times over. Nuclear weapons are defensive weapons that only constitute a real danger when the nuclear state in issue is forced to use them. 1

But what about military capacity assessments that show true offensive "great power" capabilities?

Economic and demographic issues are undeniably important. And, by such standards, Russia is a third-rate power.

For example, in terms of GDP, Russia will lag considerably behind the United States, the European Union, and a hypothetical Germany-France-United Kingdom coalition in 2020. Russia is even behind Germany on its own. The US and the EU, in particular, have GDP totals of approximately $20 trillion apiece. Germany, France, and the United Kingdom have a total GDP of around $10 trillion, with Germany having a GDP of $4.5 trillion. Russia is worth 4.3 trillion dollars. In other words, Russia's economy is barely one-fifth the size of the EU and US economies, and less than half the size of the combined economies of Western Europe's main three. 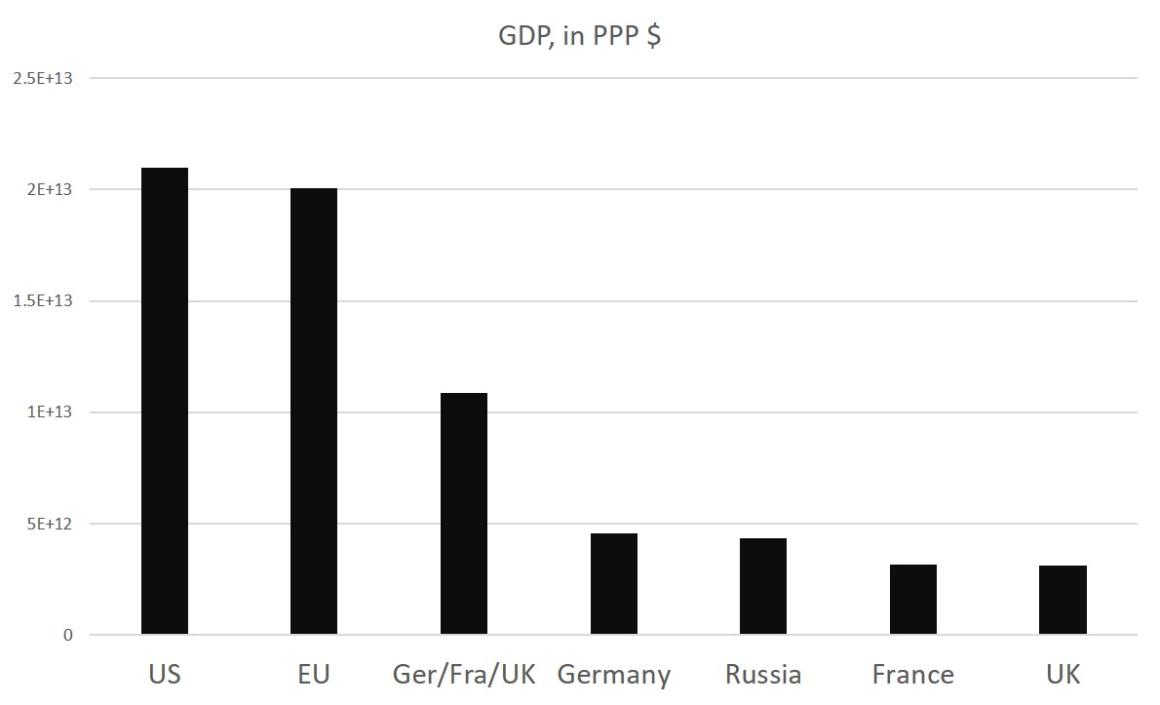 But this tells a very incomplete story of just how far Russia is behind the wealthy West.

Thanks to decades of Soviet socialism, Russia today is much poorer than its supposed "peers" like the US, Germany, and the UK. For example, the GDP per capita in the US is over $63,000 while it is less than half that ($29,800) in Russia. By the same measure, Russia amounts to only two-thirds of the EU total, and only slightly more than half of GDP per capita in Germany. 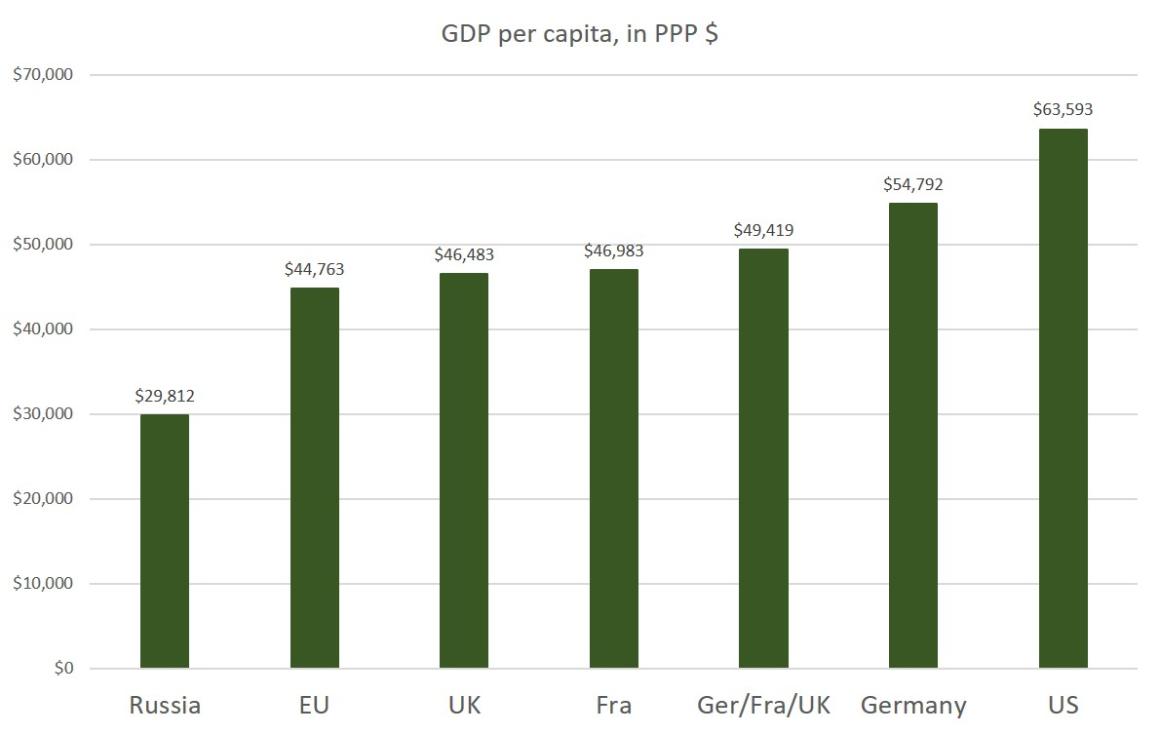 When we evaluate both GDP and GDP per capita, we can see that Russia's GDP total is mostly driven by its big population. That is, with 145 million inhabitants, Russia is the largest nation in Europe. Germany, with 83 million inhabitants, is the next biggest. In other words, despite its low GDP per capita, Russia's GDP seems to be rather huge due to the enormous number of people who reside there, despite their low salaries and productivity.

However, Russia's lack of substantial GDP per capita implies that the country's GDP covers Russia's relatively weak conventional war-making potential. This is due to Russia's comparatively low net resources.

According to foreign policy researcher Michael Beckley, a study at GDP must include consider net resources above and above the fundamental necessities of the people. A huge population may provide a high GDP, but it also needs massive quantities of food, shelter, and energy.

States can only grab so much of this for war-making until living conditions fall to politically unacceptable levels, causing a domestic crisis for the government. To put it another way, since Russians live far closer to subsistence levels than Americans or Western Europeans, the Russian state's capacity to dedicate money to conflicts is constrained.

How can this be quantified? A credible and predictive estimate of this "disposable surplus," according to Beckley and Klaus Knorr, may be calculated by "simply multiplying GDP by GDP per capita."

When the genuine net availability of resources is taken into account, Russia ranks dead bottom when compared to the bigger Western nations. 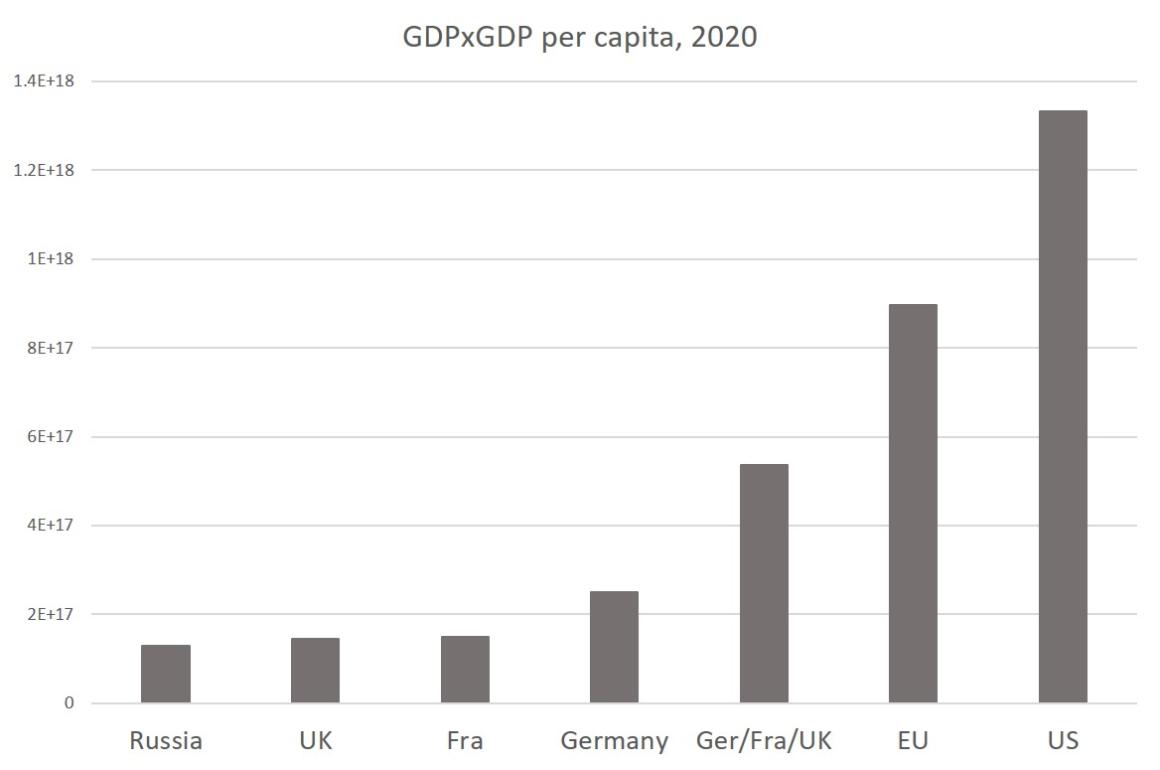 However, in terms of expenditure as a proportion of GDP, the Russian Kremlin outspent even the United States. Russia's military budget in 2020 was 4.3 percent of GDP, while the United States spent 3.7 percent. Western European regimes, on the other hand, who have long been used to allowing American taxpayers to flood North American Treaty Organization (NATO) members with military welfare expenditure, tend to spend significantly less than 3% on defense. 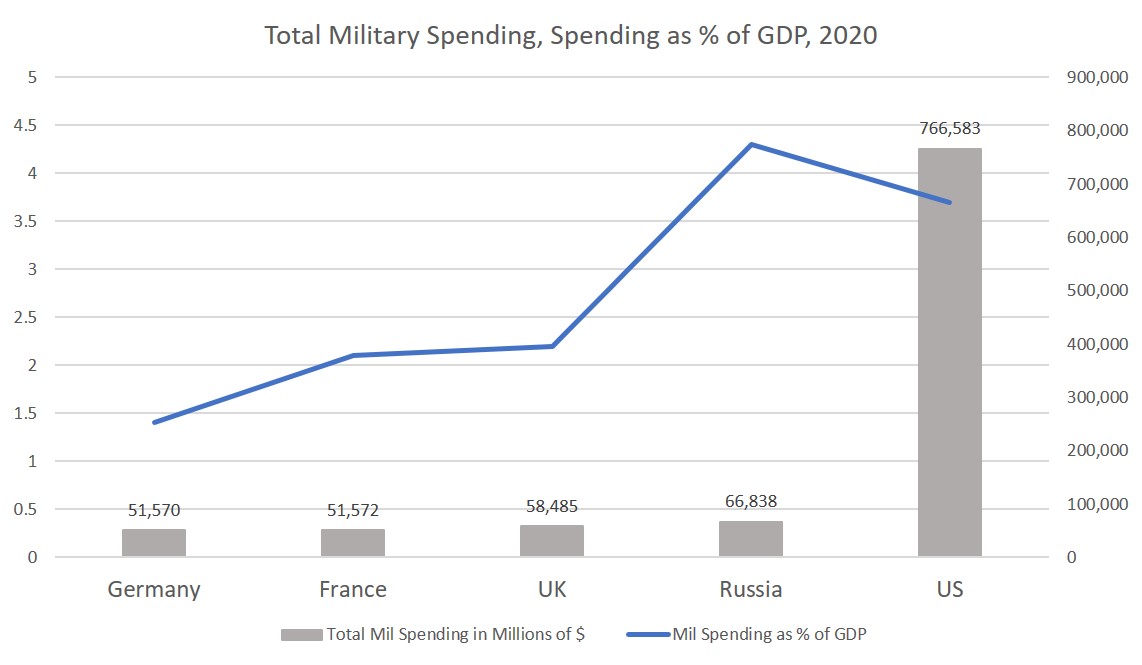 Specifically, military spending in the UK, France, and Germany are 2.2 percent, 2.1 percent, and 1.4 percent, respectively.

It should be no surprise that we find these countries—being much wealthier than Russia—are not nearly as close as Russia is to hitting the limits of that critical "disposable surplus." Even if they doubled their current military spending levels, neither Germany nor France would match Russia in terms of the burden military spending puts on domestic resources. (This is all also why the US should massively cut back its own spending in European defense.)

Nor can the Russian regime put its hopes in demographics to provide an edge against the West.

Russia's fertility rate is similar to that of the EU, which is to say it is among the lowest in the world. It is lower, however, than the fertility rates in Germany, the UK, France, and the US. 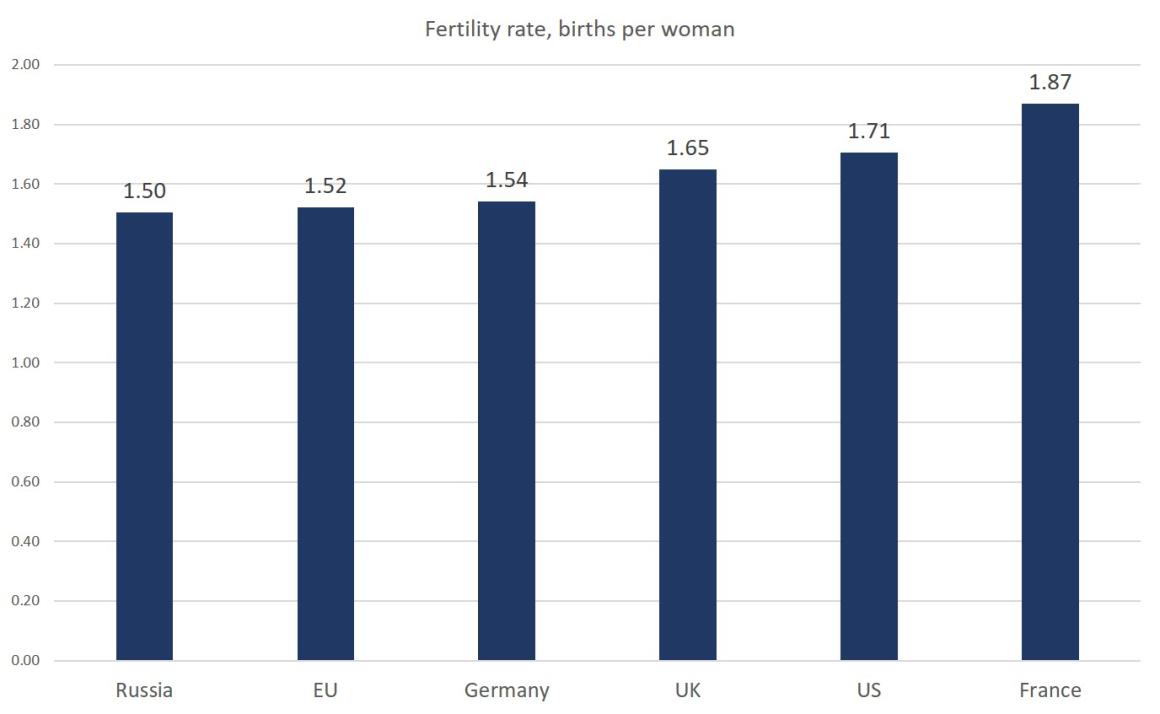 Russia, like many other rich Western nations, is confronting a demographic dilemma in which the working-age population will have to labor more to meet the economic demands of the old, who are increasingly reliant on pensions. But, unlike the West, which is already affluent, Russia, like China, confronts a future in which it will be old before it has the opportunity to become prosperous. And this is a strategic issue for Russia.

Why Russia Matters, Even If It's Not a First-Rate Power

At this point, the reader may be thinking, "If Russia is so weak, it will undoubtedly be exceedingly simple to challenge Russia in Ukraine and get rid of it."

This, however, is not the case, despite Russia's many economic and demographic difficulties.

Only the most ardent hawks in the United States—and most of the rest of the Western world—see Ukraine as a critical issue. In the United States, for example, it is difficult to find a political base that feels Ukraine is worth the blood of American soldiers and the expenditures of a full-fledged war. The Russians see Ukraine as a matter of utmost importance, much as the US does Mexico—and much as the US regarded Cuba during the Cuban Missile Crisis. If anti-Russian forces take over Ukraine, Moscow may consider it as something worth waging an expensive war for.

When it comes to Ukraine, the Russian state may be ready to pay extremely high prices that the West is not politically prepared to pay. Moscow may be prepared to cut severely into the "disposable excess" required for warmaking. Russia's history over the last 210 years demonstrates nothing if not that Russian administrations are ready to subject the populace to great suffering in order to defend what they regard as critical interests.

This, however, should not be mistaken with the capacity to engage in power projection or marshal offensive military forces. A nation with a low GDP and a shrinking population lacks these competencies. Russia is powerful enough – but only strong enough – to resist true big powers in defensive conflicts along its borders. This, along with the fact that driving Moscow into a corner may result in nuclear war, is all the more reason to avoid misinterpreting Russia's offensive capabilities.

All of these characteristics assist to explain why relatively weak regimes, such as Russia, are eager to seek catastrophe even when they are in a weak position. As Kelly Greenhill and Joshua Shifrinson explain in this week's Foreign Policy:

Why would states take such seemingly irrational steps as … military escalation that risk[s] antagonizing much more powerful states and triggering punishing retaliation? Why turn to the creation of crises as a method of influence? …

Far from irrational, crisis generation is a tried-and-true strategy of weak actors seeking negotiations and concessions from stronger actors opposed to granting either.

Russia's actions in Ukraine do not reflect the conduct of a powerful state capable of spreading its control over huge new areas. Rather, the Ukraine issue is the outcome of the West's failure to take Moscow's worries about pushing NATO closer to Russia's heartland seriously. The West's continuous disregard of Russian concerns has compelled Russia's relatively weak state to take more risks.

This is exactly what is happening in eastern Ukraine right now. But none of this implies that Russia is a big power on par with the United States or even Western Europe.

More from: Ryan McMaken
1
As Biden passes the buck to the do-nothing Fed, ...
2
The Federal Reserve's New 'Tightening' Plan Is Far Too ...
3
Biden Admits That Sanctions Are Ineffective and Cost Us ...
4
Will Biden Sanction Half of the World in an ...
Filed under Putin ,  Russia ,  NATO ,  Biden ,  World War III ,  Europe ,  EMP nuclear attack ,  Zelensky ,  Ukraine

Most Popular This Week
1
China has hinted a relaxation of its tech crackdown, ...
2
America's Crypto Dilemma
3
'The US dollar has reached a 20-year high, posing ...
4
Yellen, Cryptocurrencies, and the Risk of Loss
5
The Anti-George Washington Generation
6
How Elon Musk Can Resolve His Pseudonym Conundrum
7
Biden was so preoccupied with the Ukraine conflict that ...
8
Li Keqiang could be China's future president
9
Multiculturalism is a form of anti-culture
10
Price Controls and Nancy Pelosi