The Fed only has two tasks, and one of them isn't dealing with climate policy

An Interview with David Bahnsen on Economics, Finance, Populism, and the Federal Reserve

The federal government must maintain interest rates low in order to continue borrowing billions of dollars for continuous 'relief' programs and new wars.

According to the Bureau of Labor Statistics (BLS), Consumer Price Index (CPI) inflation rose 7.5 percent in January, year over year. According to the BLS, this was the "highest 12-month gain since the period ending February 1982." Moreover,

When it comes to food, the most significant increases were recorded in "meats, poultry, fish, and eggs, which increased 12.2 percent year on year."

The last time CPI inflation reached this level was in February 1982, when it was 7.6 percent. This was a significant improvement from the very high inflation rates recorded in 1980 and 1981, when inflation reached 18 percent in certain months. 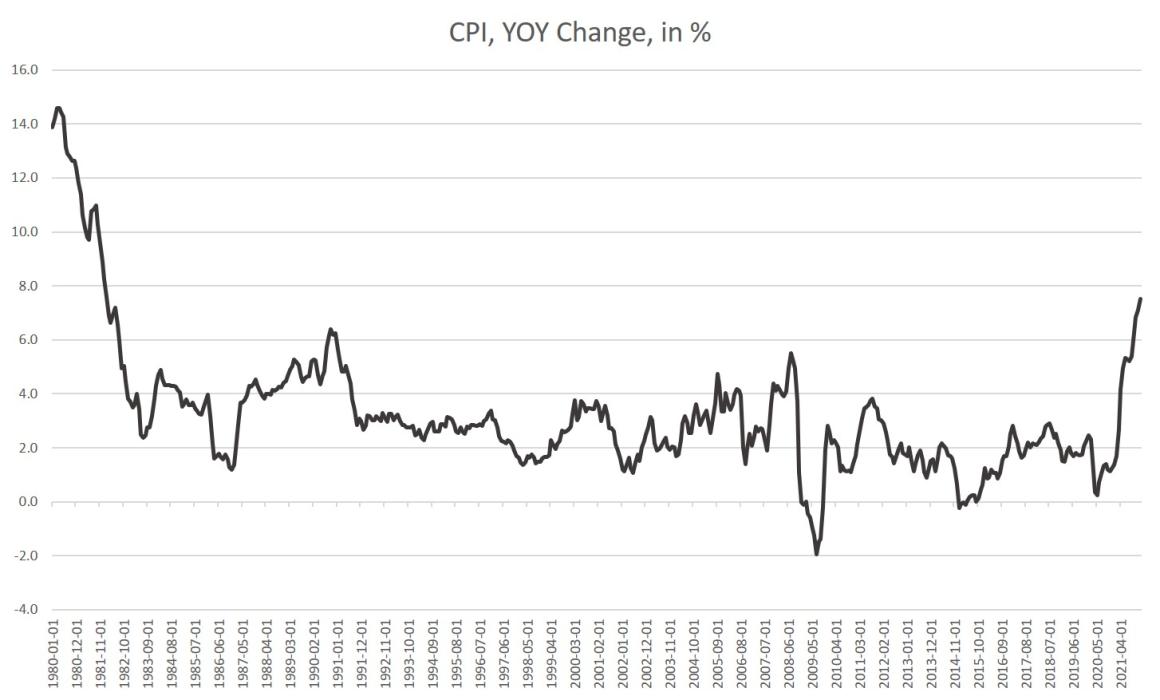 With price inflation reaching a four-decade high, the issue is whether the Fed intends to do anything to reduce monetary inflation, which is a significant contributor to today's price inflation. Since April of last year, the pace of price inflation has been over 4%, and it has surged above 6% since October. Nonetheless, the Fed's sole move has been to somewhat reduce asset purchases financed by the central bank's monetary growth. In other words, even as prices have risen, the Fed has continued to actively pump fresh money into the economy.

Yes, there has been much discussion about tapering and taking action to reverse the Fed's twelve-year-long easy money binge, but the Fed has done nothing. The target federal funds rate has remained at 0.25 percent since early 2020. Since the Fed first pretended to be hawkish in October, its portfolio has grown from $8.5 trillion to $8.8 trillion. True, there has been a modest slowdown in new purchases, but the fact that some people are even claiming this is a hawkish turn demonstrates how far we are from "normalization." The Fed will most likely cease active asset purchases soon—at least until it determines that further quantitative easing (QE) is required. There is no mention of actually reducing the portfolio.

The lack of action on interest rates is also noteworthy. The effective federal funds rate was near 12% the previous time the CPI inflation rate was at 7.5 percent. Back in 1989, the Fed permitted interest rates to grow in tandem with inflation, with the effective federal funds rate peaking at roughly 9.5 percent. Interest rates once again exceeded CPI inflation in 2006. When combined with disinflationary influences such as international trade and improving productivity, this dampened price inflationary pressures in the medium run.

True, since Greenspan started pursuing a weaker currency in the late 1980s, the wider strategy has always been toward more monetary inflation. Nonetheless, there was some realization before to the Janet Yellen period that holding interest rates at zero while flooding the market with fresh money via asset purchases may be a problem.

Those days, however, are no longer present, owing to individuals like as Yellen and Jerome Powell. The "plan" is now to maintain interest rates around zero even while price inflation reaches a four-decade high. We can obviously notice the disconnect here:

So, what will the Federal Reserve do in the next months? The most hawkish expectations tend to be that the Fed would hike the federal funds rate by 1% while doing nothing to reduce the size of the portfolio, which would genuinely compress the money supply.

Rather, we'll get a very mild "taper," handled with considerable care as the Fed prays it won't destabilize the markets.

All of this, of course, underscores how very fragile our present bubble economy is—and the Fed is well aware of it. After almost a decade of prosperity, the Fed managed to raise the target fed funds rate to 2% in 2019. This most certainly contributed to the repo panic that year, prompting the Fed to resume asset purchases after a temporary sell-off. Before the covid crisis, the economy was already going towards 2020 in a weaker posture.

However, the Fed now believes that the economy would be too weak to survive even a 1% target rate increase spread out over a year. (Keep in mind, that's the most anybody is genuinely discussing.) The rise in the goal rate is likely to be significantly less.) Because the Fed is terrified that even the slightest unexpected move would burst these asset bubbles, the money-creation locomotive has barely slowed to a trickle.

Fed mouthpieces, of course, are ecstatic about this.


For example, St. Louis Fed president James Bullard has been patting the Fed on the back for not crashing the economy so far. The Wall Street Journal quotes Bullard this week:

“We don’t want to be disruptive or surprising markets…. I would like to do this in the smoothest way possible, and we, so far, have achieved that,” [Bullard] said, adding that he would change his view “if the data went against us here.”

In other words, according to Bullard, the Fed has been pretty smooth. Never mind that the Fed has done nothing more than marginally slow asset purchases. Bullard is correct, though, that any significant steps would take the markets by surprise. The market has undoubtedly already priced in widespread pessimism that the Fed would do much more than a few of 25-basis-point rises this year.

In other words, it's difficult to see the Fed's dovish fake hawkism having much of an impact on inflation—unless, of course, the Fed causes a recession. And this is what the Fed is concerned about. How will the markets respond if it pushes the panic button and raises rates by, say, fifty basis points? The Fed has no idea and is frightened to find out.

Other reasons also weigh against any significant Fed action. The federal government must maintain interest rates low in order to continue borrowing billions of dollars for continuous "relief" programs and new wars. Any large rise in interest rates might necessitate significant budget cutbacks to programs in order to pay debt interest. In the worst-case scenario, excessive interest rates might even lead to a national debt crisis. We may also discover that the Fed is more concerned with maintaining asset prices than with controlling price inflation. That indicates the Fed will favor billionaires over ordinary people. If that occurs, it will not come as a surprise. The central bank has evolved into a powerful weapon for transfer of wealth from middle-class dollar holders to affluent Wall Street hedge funds.

More from: Ryan McMaken
1
As Biden passes the buck to the do-nothing Fed, ...
2
The Federal Reserve's New 'Tightening' Plan Is Far Too ...
3
Biden Admits That Sanctions Are Ineffective and Cost Us ...
4
Will Biden Sanction Half of the World in an ...
Filed under David Bahnsen ,  Economics ,  Finance ,  Populism ,  Federal Reserve ,  Fed Funds Rate Projections ,  Inflation