Will it ever be able to break free from the transit industrial complex and restore sanity to US transportation policy?

Two crucial aspects are overlooked in this and other assessments of transportation investment. To begin with, it is transit projects, not transportation projects, that are costly. The United States still builds highways at pretty reasonable costs ranging from about $2 million per lane‐​mile in rural areas to $15 million in major urban areas. By comparison, the average light‐​rail line now being planned or under construction costs $209 million per route‐​mile (which is physically equal to about two lane‐​miles). 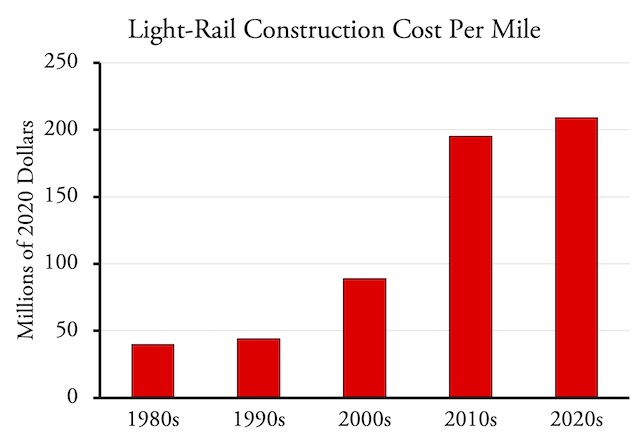 The average cost of light‐​rail construction per route‐​mile has increased more than five times since the 1990s. Costs haven’t grown as much in the 2020s, but the decade isn’t over yet. Source: Federal Transit Administration cost reports.

Second, transportation building expenses in the United States are not just far more than in other nations, but also significantly greater than they were just a few decades ago. The average cost of light rail construction in the 1990s was $44 million per route mile (in today's money). That's still not cost-effective, given that highway lanes were far cheaper and handled significantly more passengers and freight every day, but it's a lot better than $209 million per mile. Highway prices have grown as well, although only by around 40% after accounting for inflation.

So the real question should be: why has transit construction gotten so expensive in the past two or three decades? I explore this question in detail in a recent policy brief, but in a nutshell the answer is that transit advocates have successfully persuaded many politicians and voters to spend endless amounts of money on transit without ever questioning whether transit produces any transportation benefits. As a result, few people notice that transit agencies in 2019 spent $1.38 for every passenger‐​mile they carried while Americans spent only about 26 cents per passenger‐​mile driving their automobiles. 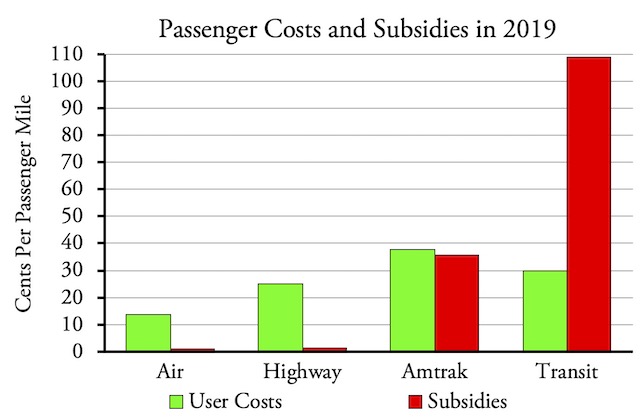 The transit lobby or, as I call it, the transit‐​industrial complex, includes rail contractors, transit vehicle manufacturers, transit unions, transit agencies, and environmental groups. (Note that transit riders are not listed as they aren’t well organized.) Economist Mancur Olson would have called this group a distributional coalition, which, he said, worked not to increase economic productivity but to redistribute it.

Transit advocates are totally upfront about this. They oppose new highways because more people will use them. They call this induced demand, but I call it increased economic productivity. Instead, they want transit subsidies to “get people out of their cars,” meaning they want to reduce economic productivity by replacing low‐​cost transportation with high‐​cost transportation.

In 1982, the transit lobby persuaded Congress to divert a share of highway‐​user fees to transit; since then, 20 percent of all gas tax increases have gone to transit. In 1991, the transit‐​industrial complex convinced Congress to create a multi‐​billion‐​dollar slush fund for building new transit infrastructure. Transit agencies successfully persuaded the Federal Transit Administration to hand out these funds without regard to the cost‐​effectiveness of projects. The result was that transit agencies gold‐​plated their projects in order to be eligible for more federal funds.

In 2008, Congress departed from its historic policy of limiting highway and transit spending to the amount of revenues collected from highway users. Since then, Congress has spent $10 billion to $15 billion a year more on surface transportation than highway revenues (see the “Net Transfers” column), which just happens to approximate the amount it spends on transit.

This was compounded during the pandemic, when three COVID relief bills passed by Congress dedicated 65 percent of transportation funds (see table on pp. 5–8) to public transit systems that were carrying only about half a percent of passenger travel and no freight. The recent infrastructure bill gave transit an added $40 billion without any expectation that ridership will ever recover to 2019 levels.

All of these actions have given transit agencies a clear signal: spend as much as possible because few will ever question whether that spending is justified by the transportation benefits. The transit lobby is even upfront about that, arguing in a report published last month by the American Public Transportation Association that transit should no longer be judged by the number of people it carries but by “social equity” concerns, meaning subsidies should be increased even more to give a few low‐​income people heavily discounted or even free transit rides.

(The reality is that transit does low‐​income people more harm than good: 95 percent of people earning under $25,000 per year don’t take transit to work, while more than 75 percent of the taxes used to support transit are regressive. But the transit‐​industrial complex seems to be immune to such facts.)

Will it ever be able to break free from the transit industrial complex and restore sanity to US transportation policy? Mancur Olson believed that only a catastrophic catastrophe, such as the loss of a war, could destabilize distributional alliances. We must hope that it does not come to that, as we must abandon transportation policies that think it is preferable to spend money on modes of transportation that the majority of Americans never use rather than ones that we use every day.

More from: Randal O’Toole
1
Transportation Dollars Wasted in the United States
2
Grasps for Solutions in the Dying Transit Industry
3
Countless Billions to be Spent
Filed under Transportation ,  American transportation projects