'This is what Communist countries do!': Trump Blasting Twitter

President Donald Trump continued his rant against Twitter, criticizing the social media company for suspending the account of one of his Republican allies in Pennsylvania and comparing its actions to those of a communist country.

The president  spent a portion of his Thanksgiving holiday lashing out at his enemies and he earlier accused Twitter of fabricating its trending topics.

He took up his crusade against the social media platform on Friday morning, blasting it for suspending the personal account of Pennsylvania Republican state Senator Doug Mastriano, who convened Wednesday's hearing-style event in Gettysburg to examine the presidential vote in that state.

Joe Biden won Pennsylvania by more than 81,000 votes but Trump is contesting the results. He won the state in the 2016 contest and was leading in the early vote totals this year. But Biden surged ahead when mail-in ballots were counted.

'Wow! Twitter bans highly respected Pennsylvania State Senator Doug Mastriano after he did a great job of leading a hearing on the 2020 Election fraud. They and the Fake News, working together, want to SILENCE THE TRUTH. Can't let that happen. This is what Communist countries do!,' Trump tweeted Friday morning.

Wow! Twitter bans highly respected Pennsylvania State Senator Doug Mastriano after he did a great job of leading a hearing on the 2020 Election fraud. They and the Fake News, working together, want to SILENCE THE TRUTH. Can’t let that happen. This is what Communist countries do!

Mastriano posted from his official account to criticize Twitter for suspending his personal one: 'This censorship is unacceptable in America. A nation that I served for most of my adult life... The point of Twitter suspending this personal account is to prevent me from posting to my Senate account— to silence our voice.' 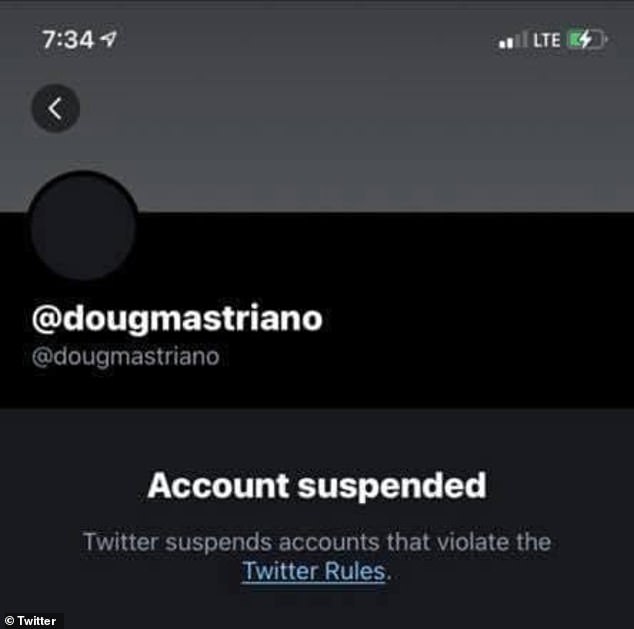 The Republican lawmaker and retired U.S. Army colonel questioned the results of the election on Wednesday, when he held a hearing-type event on the issue.

'I mean, I don't even know how this happened in America,' Mastriano said. 'We can send, 50 years ago, men to the moon, but we can't have a safe secure election in Philadelphia and Pennsylvania? What's going on here?'

Rudy Giuliani, Trump's personal attorney, attended the event to offer testimony. Trump himself called in and addressed the gathering via attorney Jenna Ellis' cell phone, which she held up to a microphone so the president could be heard.

Trump has refused to concede the election although he said Thursday he would vacate the White House for Biden should the electoral college certify the Democrat's win.

But he's continued his arguments that the election was 'rigged.' He has shown no proof of his allegation, his lawsuits in states trying to overturn Biden wins have gone nowhere and his campaign has shown no evidence of massive voter fraud.

On Friday morning, Trump tweeted several news bites from OANN and Newsmax - two conservative news networks - that backed up his claim he won Pennsylvania and mocked Biden's viewership for his Wednesday Thanksgiving address.

Twitter has labeled many of the president's tweets as containing disputed information.

Trump, who has long accused the social media site of being biased against conservatives, blasted it on Thursday evening, accusing Twitter of making up 'negative stuff' for their trending section, and called for the repeal of Section 230, a part of a law that shields internet companies from liability for the content that users post.

But within half an hour the number one trending topic in the United States was 'DiaperDon' - a reference to the president sitting behind a small desk earlier in the day when he took questions from reporters after he made a Thanksgiving call to U.S. troops.

Trump retweeted and wrote more than a dozen tweets on Thursday, including several just hours after he grew visibly angry with a Reuters reporter during the question-and-answer session at the White House.

Trump also retweeted his favorite commentators - who falsely suggested there's still a chance he can overturn the results of the election - and also vented his frustration at the media, Alexandria-Ocasio Cortez, kneeling NFL players, and Fox News.

When he wasn't tweeting, Trump held a news conference during which he scolded White House correspondent Jeff Mason, who asked the president if he would concede the election if the Electoral College voted to officially make Joe Biden the winner on December 14.

'I'm the President of the United States. Don't ever talk to the president that way,' Trump told Mason during the heated exchange.

'You're just a lightweight,' an angry Trump told Mason.

Twitter is sending out totally false “Trends” that have absolutely nothing to do with what is really trending in the world. They make it up, and only negative “stuff”. Same thing will happen to Twitter as is happening to @FoxNews daytime. Also, big Conservative discrimination! 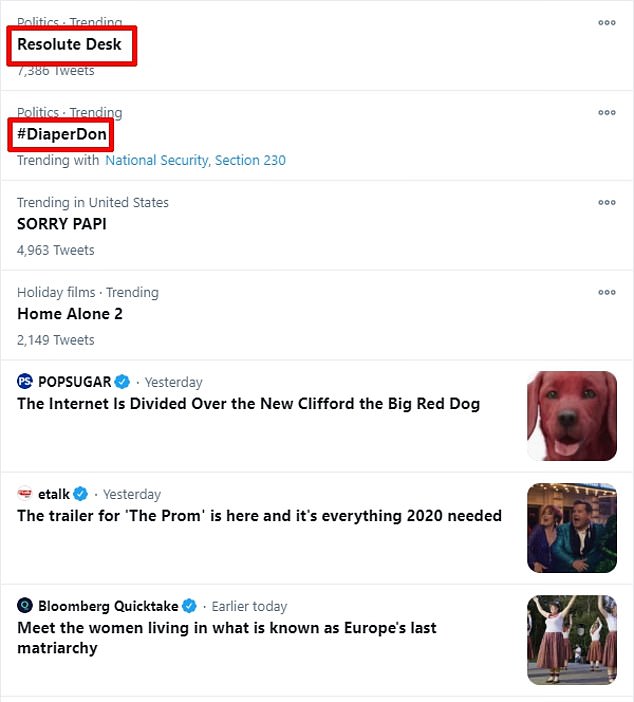 The president appeared grumpy earlier in the day on Thursday, when he was caught on camera using foul language after he flubbed a golf shot while playing at his course in Sterling, Virginia.

'I hate this f*****g hole!' Trump said after he chipped a ball into the water.

The president on Thursday night repeated past grievances about the November 3 election which he lost to President-elect Joe Biden. He also took aim once again at Twitter, claiming that it was conspiring to make him look bad.

Trump posted a tweet linking to an opinion column written by a blogger with The Federalist, a pro-Trump, conservative-leaning news site.

It suggested that that Biden's win was fraudulent since it defied several metrics that have historically been used to gauge who would win a presidential election.

'A must read. Impossible for Biden to have overcome these, and even greater, odds!' Trump tweeted when linking the article.

The president then posted another tweet complaining about media coverage of his Thanksgiving Day message to US troops stationed abroad.

'I gave a long news conference today after wishing the military a Happy Thanksgiving, & realized once again that the Fake News Media coordinates so that the real message of such a conference never gets out,' the president tweeted.

'Primary point made was that the 2020 Election was RIGGED, and that I WON!'

Trump spoke to reporters in the White House's ornate Diplomatic Reception Room after holding a teleconference with US military leaders stationed across the globe.

He thanked them for their service and jokingly warned them not to eat too much turkey, then turned to the election after ending the call.

The president then got into his heated exchange with Mason, which generated significant attention on social media as well as in the press.

Trump then took aim at Twitter after the social media site's trending topics painted the president in an unfavorable light.

'Twitter is sending out totally false 'Trends' that have absolutely nothing to do with what is really trending in the world,' the president tweeted on Thursday.

'They make it up, and only negative 'stuff'.

'Same thing will happen to Twitter as is happening to Fox News daytime.

Twitter users relentlessly mocked the president for the small desk from which he spoke during his White House news conference.

The sight of Trump sitting at the desk prompted Twitter users to trend the topic 'Resolute Desk' - the much larger desk where the president sits in the Oval Office.

Another trending topic on Twitter was the hashtag #DiaperDon, a reaction to an image of the president sitting at his smaller desk.

The president then tweeted: 'For purposes of National Security, Section 230 must be immediately terminated!!!'

Section 230 of the 1996 Communications Decency Act protects internet companies from liability for the material users post on their networks.

'No provider or user of an interactive computer service shall be treated as the publisher or speaker of any information provided by another information content provider,' the law states.