XRP has outperformed every cryptocurrency in the top 100 coins by market cap in the last week alone, gaining over 67%, but what is driving these bullish waves?

After months of battered price action, Ripple (XRP) appears to be regaining momentum after a long period of consolidation. The possibility of a final verdict and closure of the SEC v Ripple case in the coming days was one reason for the sudden price increase.

Bullishness is aided by settlement rumors.

Ripple CEO Brad Garlinghouse recently stated in an interview that the Securities and Exchange Commission (SEC) had "lost its way" and was a "cuckoo for cocoa puffs." Garlinghouse's remarks have paved the way for the market's increased expectations.

Aside from external news, which has a significant impact on investor sentiment, certain technicals and on-chain indicators painted a positive picture for XRP.

The XRP whales are back in action.

According to Santiment on-chain data, active shark and whale addresses holding 1 million to 10 million XRP have been accumulating since late 2020. 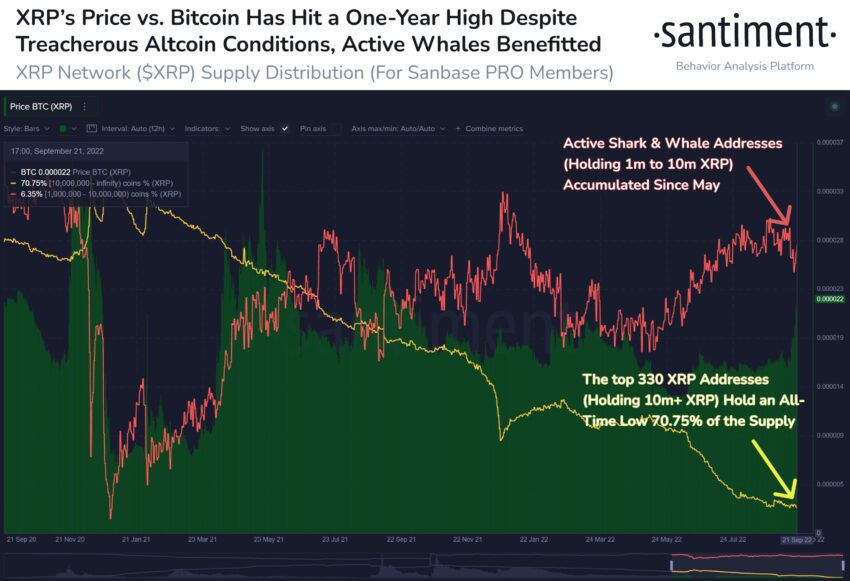 With active whales and sharks adding to their balances, the same depicts a positive long-term trend for XRP, which could give the price a boost.

Having said that, the XRP/BTC price ratio has reached a one-year high of 0.000025 breaking the ratio's long-term downtrend.

The daily RSI showed highly overbought values, indicating strong buying pressure in the market as bulls prevailed. Long-term signals appeared to turn bullish as well, with the weekly RSI breaking out of its own descending resistance line.

In just 24 hours, open interest in futures and perpetual markets increased by 65.43%. In contrast, $14.1 million in XRP shorts were liquidated following the bullish price action.

Given the saturated market, a short-term pullback could cause XRP to revisit the $0.39 support level.