Proponents of arming Ukraine against Russia refer to critics as 'isolationists.' However, these 'entwining partnerships' have a history of terrible outcomes.

Libertarians, liberty-minded Republicans, and other opponents of non-defensive wars are sometimes stereotyped as having a "every man for himself" mentality in both economics and foreign policy. Of course, both of these statements are demonstrably incorrect, but this article will focus on the latter.

In a 2014 LNP story, local Libertarian activist Roy Minet focused on the prevalent idea of isolationism, saying, "Apparently, they brand everybody who doesn't support their many military adventures throughout the world an isolationist." In a 2017 post, I discussed how the isolationist label harmed Ron Paul's presidential campaigns in 2008 and 2012. This mixture of noninterventionism and "isolationism" continues to stifle and distort antiwar voices' message... which is especially pertinent given the current developments in Ukraine.

A mailer headed "No War with Russia" was recently distributed by the Libertarian National Committee. It advises against tying allies together and provides a brief history of Russia's unstable relationship with the United States, as well as the role NATO has played in it. Because "when all you have is a hammer, everything seems like a nail," the prescription is noninterventionism.

A new essay on mises.org illustrates how the state, in collaboration with its media friends, creates crises in order to maintain the hammer's power: "What distinguishes our current situation is how moral panics are being utilized to organize a citizen army that delights in the death of nonconforming resistance.... The Russia-Ukraine conflict is a convenient lightning rod for the government and established centers of power in society to malign Americans who have opposing viewpoints."

This "wrong vision" is frequently just a more nuanced and contextualized version of the issue than what is seen in legacy media. "The reason Americans want more war is undoubtedly nuanced, but it's evident that they have simplistic views of the situation in the Middle East."

Perhaps people's acceptance of the basic narrative is due to their resignation to the assumption that the conflict's history and context are too hard to comprehend. As a result, popular virtue signaling appears to be focused on criticizing Vladimir Putin while making no concessions to him (even if this comes at the expense of Ukrainians themselves). Noninterventionism, on the other hand, takes the logical position that because Putin is not our leader, Americans cannot hold him accountable for his poor actions. In contrast, if we at least acknowledge the role of the North Atlantic Treaty Organization in inciting this crisis, we can try to hold our own leaders accountable and press them to establish a more diplomatic environment.

To put it another way, for many of us, refusing to choose sides also means resisting the ludicrous one-sided narrative that dominates our state-run media. This sadly feeds into the toxic "you're either with us or against us" narrative, in which individuals are accused of being "traitors" for attempting to see things from the other side's perspective. It's a dividing mindset that's doing havoc on our country, even more so than during the "freedom fries" heyday of the Iraq War. 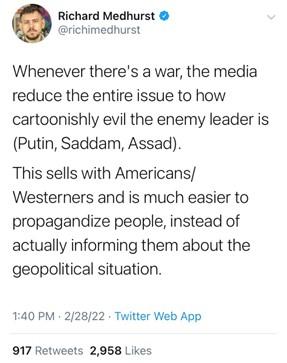 The West did not do everything it could to avert this war, and it has not taken any of the apparent alternatives to ending it as of this writing. The US and NATO have never even proposed to accept any of Putin's claimed demands, such as agreement on Ukrainian neutrality, withdrawal of surrounding NATO forces, or independence for Donetsk and Luhansk, despite widespread media condemnation. Instead, the dominant narrative ignores the US role in the 2014 Maidan coup, which resulted in the installation of a NATO puppet hostile to Russia, as well as the neo-Nazi element of the Ukrainian government (Azov Battalion et al.) responsible for many of the fourteen thousand deaths in the Russian-speaking Donbass regions over the last eight years.

Even among antiwar activists, there may be some complacency on this issue due to the misconception that we are already practicing nonintervention simply because we are not deploying soldiers into Ukraine or imposing a no-fly zone. We are already cobelligerents with Russia, as evidenced by the billions of dollars in armaments we have provided Ukraine in recent years. The Biden administration continues to increase spending to arm Ukraine, despite Russia's formal warning. Those who doubt that this will escalate into World War III should realize that Putin has so far followed through on everything he promised, including the February invasion. 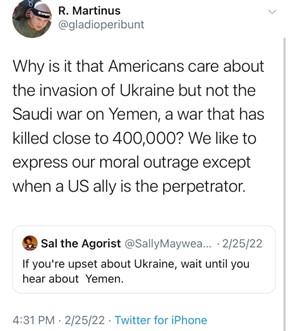 The majority of Americans rely on the media to tell them what to be angry about and for whom to feel compassion, so they are either mute or vociferous in their support for arming Ukraine, assuming that this will help the Ukrainians "win." But have they considered the possibility that these weapons will merely contribute to prolong the conflict?

There are no true winners for the Ukrainian civilian population as long as the war continues. The concept of "humanitarian war" sounds great, but the quickest way to peace is the ultimate win for humanity. And how that journey is interpreted is largely determined by the news sources one follows.

So, which account of the current situation in Ukraine is correct? At this point, a few questions might be useful: Over the last two decades, how many other things have official sources gotten right? Is it true that American military intervention has made Iraq, Syria, Libya, and Yemen better off? What makes this period unique?

Alternatively, rather than using this merit-based approach, one may start with the safer and more straightforward assumption that there is misinformation on all sides, because truth is the first casualty of war. Because both sides are capable of spreading propaganda, forming an informed opinion should necessitate striving to sort through both. If this becomes too difficult, sorting through neither while accepting nonintervention as the default correct viewpoint is a viable option. In each situation, the noninterventionist position is preferable because it avoids advocating for something that may unwittingly cause more harm than benefit. 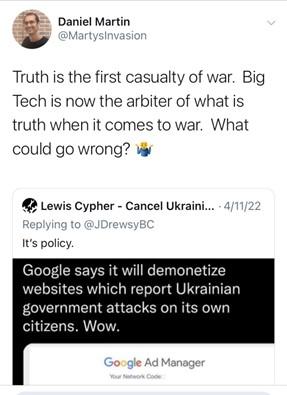 In the end, the concept that we must assist Ukraine "win" this conflict is as weak as Barack Obama's 2008 claim that "Afghanistan is a war we must win." Will Americans' well-intentioned but extensively exploited compassion for Ukraine contribute to it becoming a long-term quagmire like to Afghanistan?

Colonel MacGregor expresses his desire for "the kind of country that we were a hundred years ago, which, in most cases, was interested in intervening to end conflicts, not with military force, but by offering its services as an objective partner, as someone who could bring two sides together and avoid a larger, more destructive conflict" in an interview with Dave Smith. Is this an example of isolationism and a lack of empathy for our fellow man? Should we keep listening to neoconservatives and ostensibly "humanitarian" interventionists? A resounding no might determine Ukraine's and humanity's future.
=====
Related Video: