According to a poll, support for Black Lives Matter is dwindling across the United States.

If Mayor-elect Eric Adams reinstates the NYPD's anti-crime units, a Black Lives Matter leader has promised 'riots' and 'bloodshed' in the streets.

Hawk Newsome, a co-founder of the New York Black Lives Matter movement, made the remarks after disputing Adams at a tense closed-door meeting with the incoming Democratic Party leader.

While Adams was able to gain traction with activists on his plans to combat poverty in the black community once elected, the former NYPD captain also promised to reinstate the controversial anti-crime units, which are made up of about 600 plainclothes officers who target violent crimes, a move that was met with outrage by the Black Lives Matter movement.

Adams and Newsome also fought on the issue of responsibility, with the mayor-elect retorting that he, too, must be held accountable - not just sit back and make demands.

'It’s about bringing back a sense of protection in our city and not the disorder we feel at this time,' Adams said earlier this month prior to being elected, regarding his plan to clean up the city streets - which have seen an influx of violent crime since the start of the pandemic.

Newsome, a divisive New York figure who has labeled members of the US government as "terrorists" because the "government goes and pillages different countries," slammed the mayor-tough elect's stance on resurrecting the units, which were disbanded in 2020 during the height of the violent BLM protests.

'If they think they are going back to the old ways of policing, then we're going to take to the streets again,' Newsome said. 'There will be riots. There will be fire, and there will be bloodshed.'

But later during their sit-down, Adams called out the group: 'You're on the ground: Stop the violence in my community. I'm holding you accountable.

'Don't hold me accountable,' Adams went on. 'Being the mayor, being the borough president, being the state senator - I put my body on the line for my community, so I'm not here for folks to come and say, "Eric, we're gonna hold you accountable."'

Speaking after the sit-down to the New York Post, Newsome said: 'To ignore that history and say you're bringing it back means that he's tone deaf.'

He also told the New York Daily News: 'There is no way that he is going to let some Gestapo come in here and harm our people. We pray for peace but ... prepare for the worst.'

Adams, a centrist, won the Democratic primary in June on a law-and-order ticket, promising to reduce violent crime in New York City, which has risen sharply since the coronavirus outbreak.

Last year, though, he was chastised by leftist politicians for promising to revive the anti-crime team during the campaign.

If the unit is brought back, Chivona Newsome, a BLM co-founder and Hawk Newsome's sister, has issued similar threats.

'We will shut the city down. We will shut down City Hall, and we will give him hell and make it a nightmare,' she said.

At the closed-door event on Wednesday, Adams told leaders that as the city's second black mayor, he was the best-equipped to usher in meaningful socioeconomic and educational change to New York's communities.

'There's one thing that we do agree on, that we need to change conditions that people are living in, historical conditions. And the conditions have not changed,' Adams said during the discussion, which was live-streamed on Instagram.

And, as the city's second black mayor, he was the best-suited to bring positive change to the community, Adams said, after Democrat David Dinkins, who was elected in the early 1990s as New York dealt with racial unrest, crime, and fiscal turmoil eerily similar to what the city is currently dealing with amid the pandemic's aftermath.

'What I know for sure, is there is no one in this city that’s going to deal with this issue as the mayor of this city better than I’m going to,' he said.

But Adams and the BLM representatives got into a shouting match as they argued over police policies, with the mayor-elect becoming incensed when Hawk Newsome told him the organization would hold him accountable for future NYPD misconduct.

Adams responded: 'You're on the ground: Stop the violence in my community. I'm holding you accountable.

'Don't hold me accountable,' Adams went on. 'Being the mayor, being the borough president, being the state senator — I put my body on the line for my community, so I'm not here for folks to come and say, "Eric, we're gonna hold you accountable."

Adam's comments prompted Chivona Newsome to retort: 'You're the mayor of New York! There’s only so much we can do.'

Adams said he disagreed, but Chivona Newsome pressed on, telling him that she believes public safety would improve in the city if the mayor creates better jobs and education. 'That's a government issue,' she said.

After the meeting, the activists were furious, with Hawk Newsome saying he heard nothing from Adams to suggest he will try to fundamentally reform the NYPD.

It was the first time Hawk Newsome has met the incoming mayor, and told the New York Post that he had refused offers to meet from Mayor Bill de Blasio’s administration, calling the outgoing mayor a 'buffoon.'

The controversial BLM leader even went as far to take credit for Adams' election victory, claiming the movement allowed him to 'achieve power.'

'At least with Eric Adams, we have a clean slate,' Hawk Newsome said, adding that he still plans to work with the mayor-elect on 'anti-violence programs and food programs.'

But Hawk said he was concerned that Adams 'didn't offer a comment on police reform... he wouldn't offer us anything concrete.'

'We will be at his front door, we will be at Gracie Mansion, we will be in the streets, if he allows these police to abuse us,' Newsome told the Post. 'I am not threatening anyone. I am just saying that it’s a natural response to aggressive oppression, people will react.'

Adams said he thought there was 'no reason we cannot have both safe streets and racial justice in our city,' saying, 'If black lives truly matter, then we must address violence in our communities while we address bias in policing.

'Yelling and not listening gets us nowhere.'

Adams' election comes as New York City has been crippled by increasing crime. 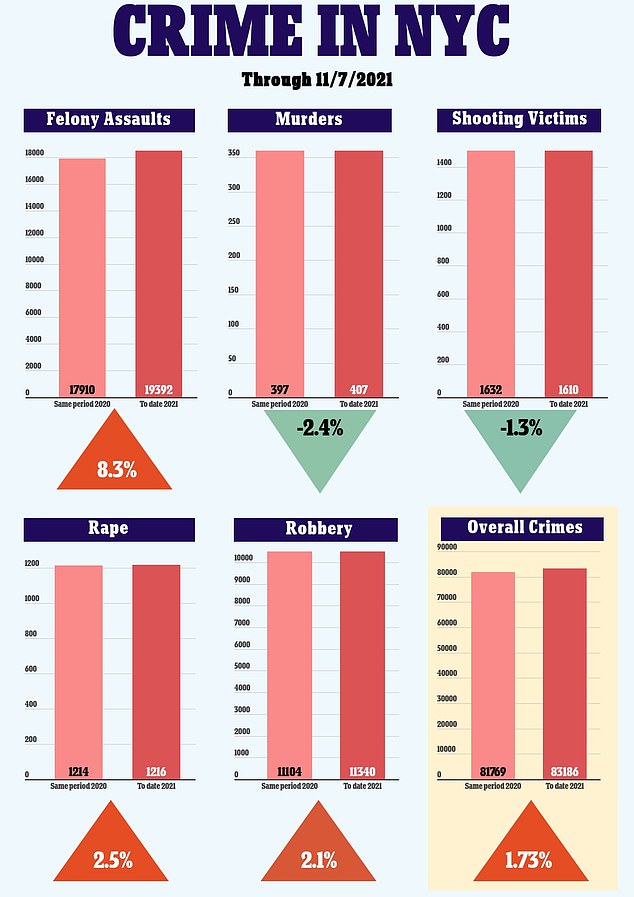 According to NYPD crime data, the city has had 1,526 shooting victims this year through October 17, nearly double the amount of gun violence victims through the same time as 2019, which had 760.

There were 1,507 shooting victims through October 17 of last year.

Of those injured in shootings, 16 young people were killed by gun violence between January 1 and September 26 - an increase of more than 136 per cent compared with the same time period in 2019, when three children or teens were killed.

According to the NYPD's latest monthly numbers, overall crime was up 1.73 per cent last month compared with November 2020. Felony assault was up by 8.3 per cent and robbery rose by 2.1 per cent.

Adams opposes defunding the police, a policy that is a rallying cry for many on the American left - and has vowed to spend the city's almost $100billion budget to bolster the force, which has come under fire amid the city's recent string of violent crimes and protests.

'This campaign was for those who have been betrayed by their government,' he said. There is a covenant between government and the people of our city: you pay your taxes, we deliver your tax dollars through goods and services. We have failed to provide those goods and services - January 1, that stops. That stops!' Adam said last week, after being elected - beating out his Republican challenger, Curtis Sliwa.

'We’re going to go after the violent crimes we’re witnessing, particularly the over-proliferation of handguns. I’m going to put in place an anti-gun unit, plainclothes, and we’re going to do precision policing and go after those gangs and gun users,' Adams said.

The mayor-elect - who grew up in abject poverty in Brownsville, Brooklyn - may have his work cut out for him, however, as the heads of the five major unions representing members of the New York City Police Department warned that as many as10,000 unvaccinated police officers were 'set to be pulled from [the] streets' earlier this month, after the city's November 1 vaccine mandate deadline for New York City employees came and went.

So far, 34 officers have been pulled from active duty.

Speaking last week however, Mayor Bill de Blasio’s touted a small decrease in the murder rate while ignoring an 11 percent jump in overall crime in a news conference last week, claiming he has been successful in reducing crime.

De Blasio focused in the drop in murders last month to 37, compared with 41 in October 2020, saying the minor reduction of 9.8 percent 'says a lot.'

The spike in overall lawlessness comes as the city grapples with an increase in visible, violent crime, including horrific subway and street attacks that have left New Yorkers terrified.

Last month, a man wearing a grinning mask inspired by the film The Purge attacked a stranger on the street with an ax. The 51-year-old victim was taken to a nearby hospital with a deep cut in his arm.

And on October 30, a man threw a Molotov cocktail into a Brooklyn bodega after an argument with employees. The workers escaped as the arsonist was about to throw a second one, but he was stopped by a witness.

De Blasio also said shootings are down in Queens and Staten Island compared to last year, and emphasized the decline in shootings in Brooklyn, which are down 20 percent from last year.

'This is crucial. This is a big story in Brooklyn. The reality bares witness that there have been amazing efforts made even in the toughest of times by the NYPD,' De Blasio said.

Shootings, however, continue to climb in other parts of the city.

'The Bronx is still a challenge - lots of resources being poured in to address Manhattan North as well,' the mayor admitted.

De Blasio said shootings were down in other boroughs thanks to community and precision policing, which depend on deep ties with the community, according to the Manhattan Institute.

'We've got to get the public more involved. We need people at the community levels to join those "Build the Block" meetings to get involved. Every New Yorker has information they can offer to the police that can be helpful to them,' he said.

Adams has routinely vocalized his disapproval of de Blasio and took steps to distance himself from the city's leader during his campaign.

He previously accused the progressive Democrat of not being 'committed and dedicated to the city.' Adams also alleged that New York needs to move away from de Blasio's policies which made it 'a city of disorder' and an 'enemy of business.'

The new mayor is slated to assume leadership of America's largest city on January 1.

More from: USAGAG
1
‘Disgusted’ Republican Rep. Mayra Flores claims her kid did ...
2
After 50 dead migrants were found in a truck, ...
3
Joe Biden accidentally helped Hunter pay a bill for ...
4
The number of people who died in the Texas ...
Filed under Black Lives Matter ,  Black Lives Matter co-founder ,  Eric Adams

Most Popular This Week
1
‘Disgusted’ Republican Rep. Mayra Flores claims her kid did ...
2
After 50 dead migrants were found in a truck, ...
3
Joe Biden accidentally helped Hunter pay a bill for ...
4
The number of people who died in the Texas ...
5
After tweeting 'No More Viagra' for 'White' Conservative Men, ...
6
As production costs go up due to Bidenflation, Hollywood ...
7
France is turning on its coal plants to get ...
8
Why Hunter's business with China isn't a 'big fat ...
9
Voicemails show that Joe Biden knew about Hunter's deals ...
10
At least 46 dead migrants were found in a ...