Taking a two-shot lead into Sunday’s final round of the Players Championship at TPC Sawgrass, Lee Westwood is playing some of the best golf of his career. If you asked the 47-year-old how

Taking a two-shot lead into Sunday’s final round of the Players Championship at TPC Sawgrass, Lee Westwood is playing some of the best golf of his career.

If you asked the 47-year-old how he’s managed to stay consistent these past few years, he’d likely point to his caddie Helen Storey, who also happens to be his girlfriend.

Since 2018, when Storey began caddying for Westwood, their relationship has always stolen the show at matches. Having your girlfriend as your caddie is certainly unconventional, but Westwood has credited Storey for always keeping him grounded.

“At my stage of my career, there’s not a lot a caddie can tell me, but obviously Helen gets me in a fantastic mood out there, and psychologically she can help me and say the things that I need to hear,” Westwood said Saturday. “She helps me in that aspect an immeasurable amount.”

Westwood and Storey, 43, began dating after the English golf pro and his ex-wife of 16 years, Laurae Coltart, separated in 2015. The two were introduced by Graham Wylie, a good friend of Westwood’s who is also married to Storey’s sister Andrea.

Coltart, with whom Westwood has two children, alleged that Lee had an affair – which he denied. And the pair legally finalized their divorce in 2017. Storey was also married once before meeting Westwood and has a daughter.

Their chemistry is evidently undeniable. Even Bryson DeChambeau, who is two shots behind Westwood heading into Sunday, can see what Storey does for Westwood out on the green. 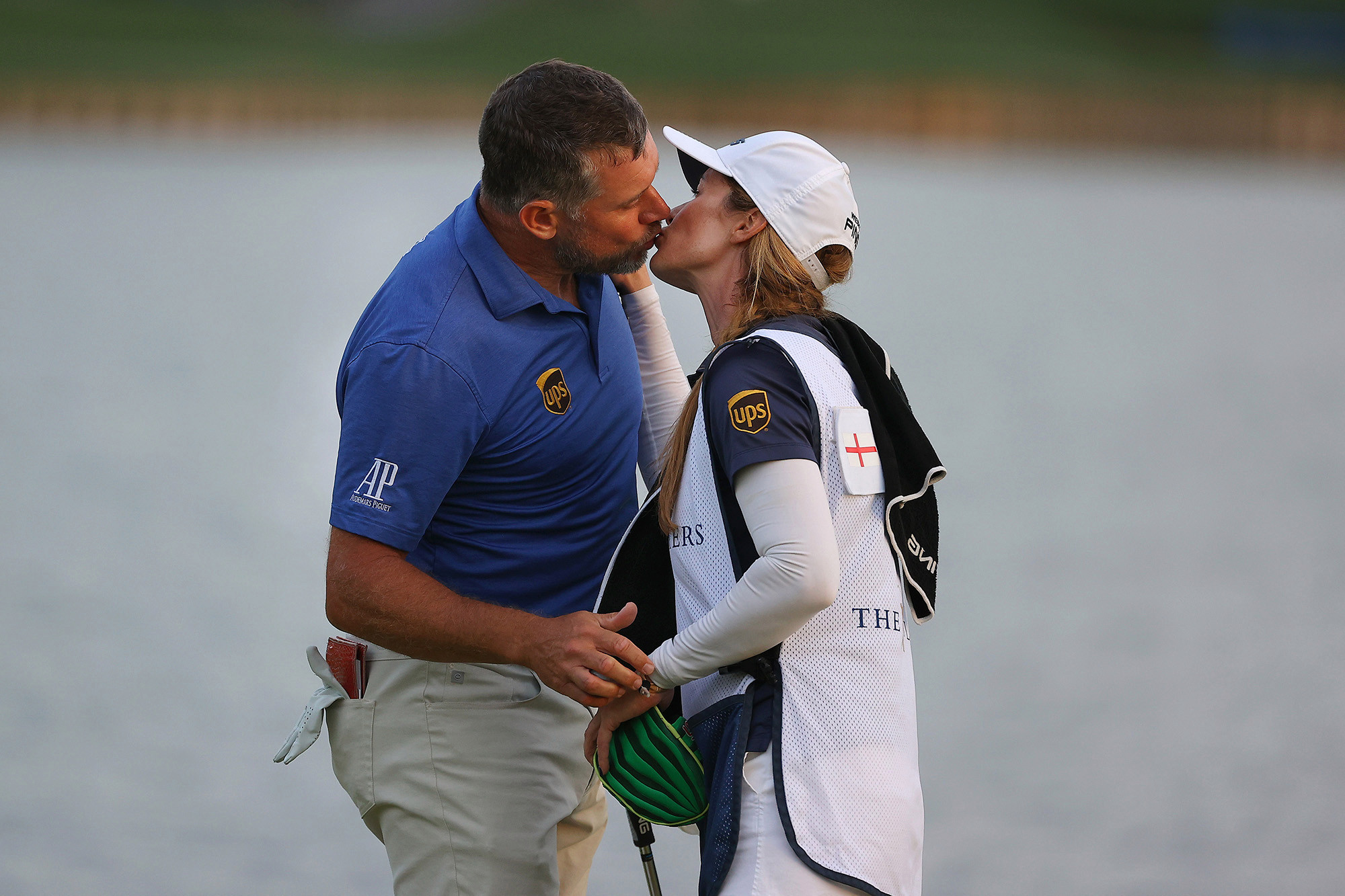 Lee Westwood kissing girlfriend and caddie Helen Storey after the third round of The Players Championship on March 13, 2021. 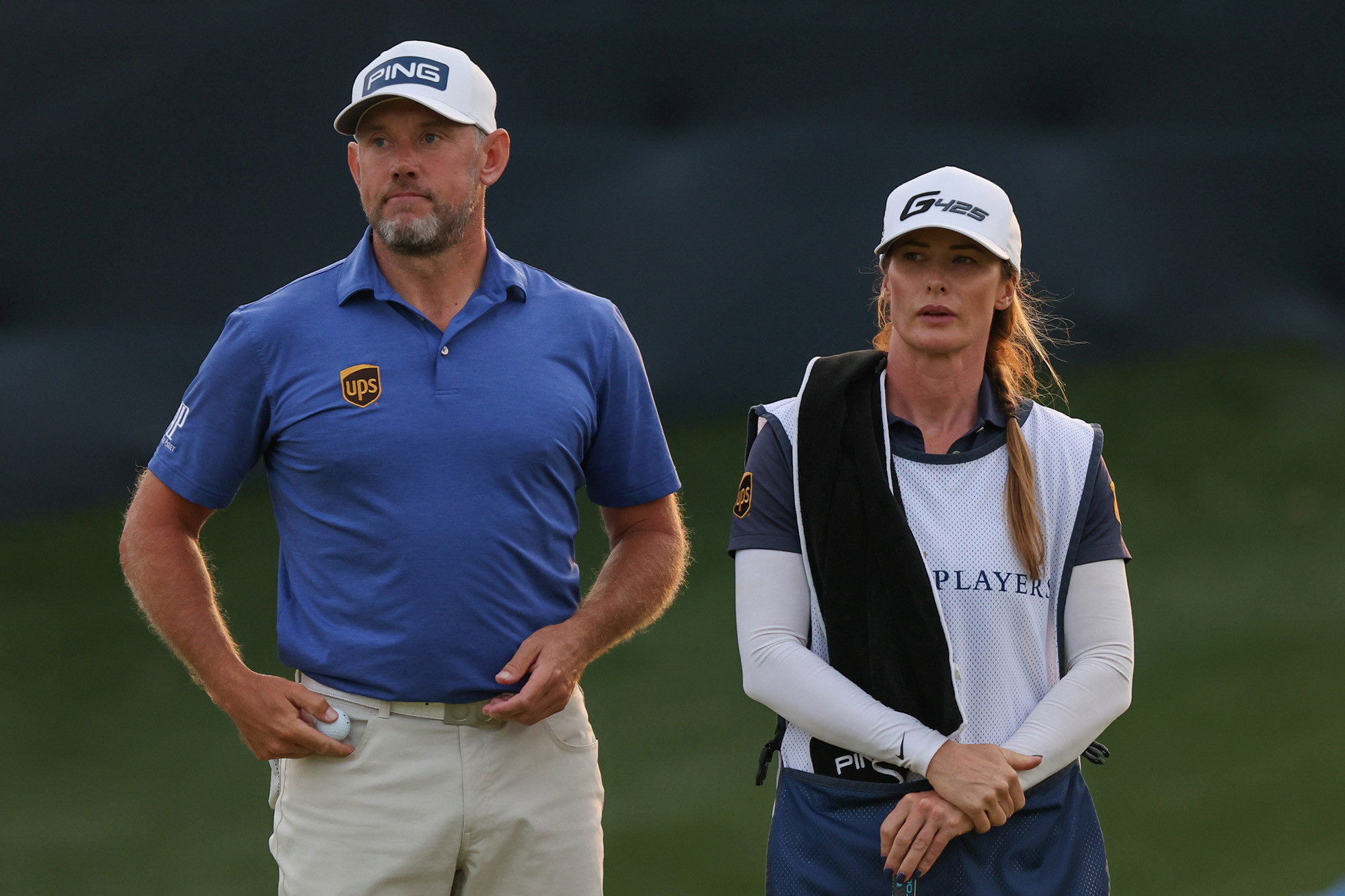 Lee Westwood with girlfriend and caddie Helen Storey during the third round of The Players Championship on March 13, 2021.

“She’s keeping him steady and level-headed and she’s a rock,” DeChambeau said. “[She] keeps his mind focused on the right things and she’s been awesome for him. That’s one of his secret weapons, I think.”

Westwood recalled to Golfweek the first time Storey accompanied him at a professional tournament. When Westwood cut a big piece of turf on one of his first swings, Storey didn’t hesitate to pick up the slab of grass to fill the divot mark as caddies often do.

“She’s walking back with the divot like this,” Westwood said, holding his palm out and away from his body to demonstrate, per Golfweek.

When Westwood asked Storey what was wrong, she replied, “I hope there’s not a worm in this.”

Shortly after, Westwood earned his first European Tour win since 2014 at the Nedbank Challenge with Storey as his caddie. She has been with him ever since.

“Obviously I get on well with Helen,” Westwood said in 2019, per Golfweek. “She doesn’t know too much about golf but she knows a lot about the way my mind works. So she keeps me in a good frame of mind and focusing on the right things at the right time.

“There’s more to caddying than carrying and getting the wind direction.”

Storey’s Instagram account shows her to be a fitness enthusiast. She reportedly worked as a fitness instructor before landing her gig as Westwood’s caddie.

Westwood is playing as well as he’s played in roughly a decade, when he had a series of top-three finishes at majors. He’s never won a major, though, and a Players Championship victory would be the biggest of his career.