We know at this point that there are species that can navigate using the Earth's magnetic field. Birds use this ability in their long-distance migrations, and the list of such species keeps getting longer, now including mole rats, turtles, lobsters, and even dogs. But exactly how they can do this remains unclear.

Scientists have for the first time observed changes in magnetism prompting a biomechanical reaction in cells. And if that's not cool enough, the cells involved in the research were human cells, lending support to theories that we ourselves may have what it takes to get around using the planet's magnetic field.

The research is published in PNAS.

The phenomenon observed by scientists from the University of Tokyo matched the predictions of a theory put forward in 1975 by Klaus Schulten of the Max Planck Institute. Schulten proposed the mechanism through which even a very weak magnetic field—such as our planet's—could influence chemical reactions in their cells, allowing birds to perceive magnetic lines and navigate as they seem to do.

Shulten's idea had to do with radical pairs. A radical is a molecule with an odd number of electrons. When two such electrons belonging to different molecules become entangled, they form a radical pair. Since there's no physical connection between the electrons, their short-lived relationship belongs in the realm of quantum mechanics.

Brief as their association is, it's long enough to affect their molecules' chemical reactions. The entangled electrons can either spin exactly in sync with each other, or exactly opposite each other. In the former case, chemical reactions are slow. In the latter case, they're faster. 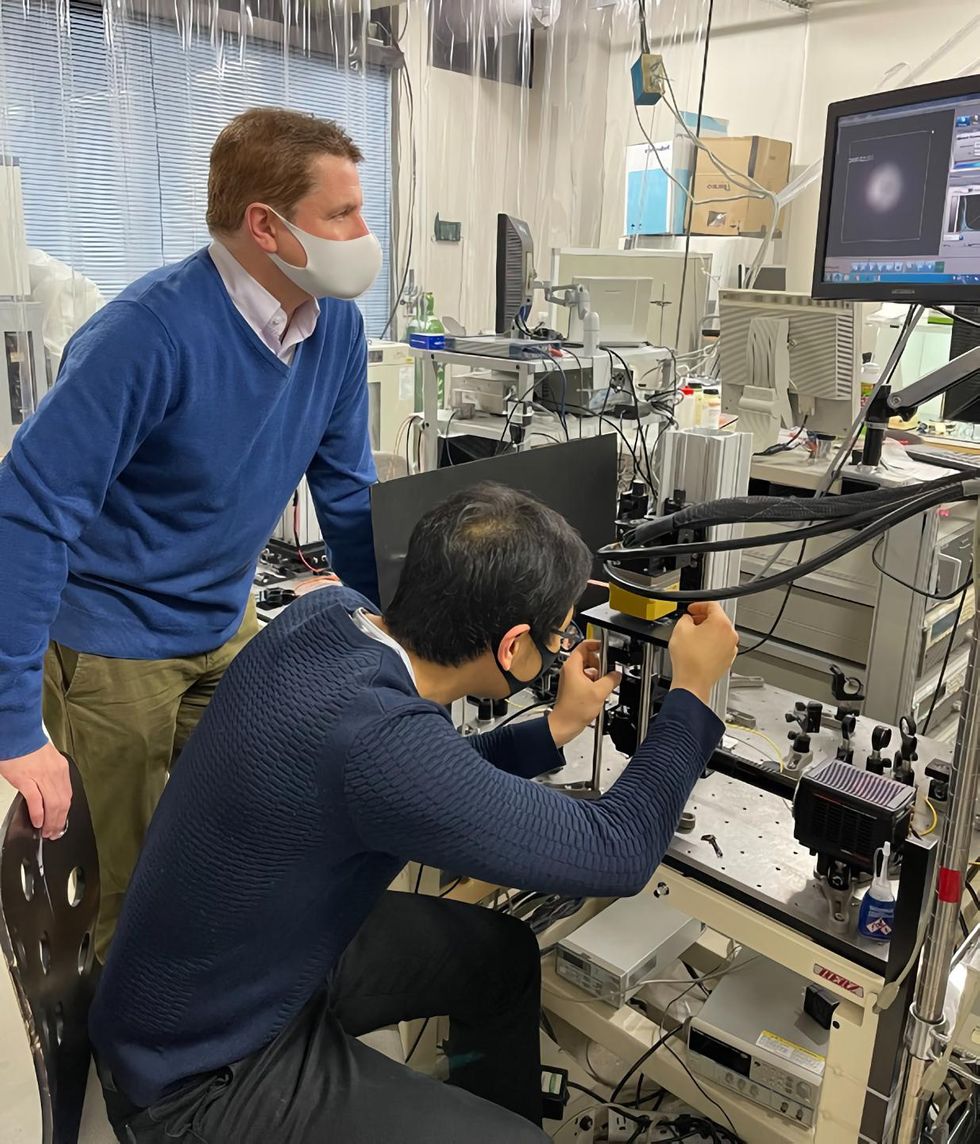 Researchers Jonathan Woodward and Noboru Ikeya in their lab

Previous research has revealed that certain animal cells contain cryptochromes, proteins that are sensitive to magnetic fields. There is a subset of these called "flavins," molecules that glow, or autofluoresce, when exposed to blue light. The researchers worked with human HeLa cells (human cervical cancer cells), because they're rich in flavins. That makes them of special interest because it appears that geomagnetic navigation is light-sensitive.

When hit with blue light, flavins either glow or produce radical pairs — what happens is a balancing act in which the slower the spin of the pairs, the fewer molecules are unoccupied and available to fluoresce.

For the experiment, the HeLa cells were irradiated with blue light for about 40 seconds, causing them to fluoresce. The researchers' expectations were that this fluorescent light resulted in the generation of radical pairs.

Since magnetism can affect the spin of electrons, every four seconds the scientists swept a magnet over the cells. They observed that their fluorescence dimmed by about 3.5 percen each time they did this, as shown in the image at the beginning of this article.

Their interpretation is that the presence of the magnet caused the electrons in the radical pairs to align, slowing down chemical reactions in the cell so that there were fewer molecules available for producing fluorescence.

The short version: The magnet caused a quantum change in the radical pairs that suppressed the flavin's ability to fluoresce.

The University of Tokyo's Jonathan Woodward, who authored the study with doctoral student Noboru Ikeya, explains what's so exciting about the experiment:

"The joyous thing about this research is to see that the relationship between the spins of two individual electrons can have a major effect on biology."

He notes, "We've not modified or added anything to these cells. We think we have extremely strong evidence that we've observed a purely quantum mechanical process affecting chemical activity at the cellular level."