A new system separates oxygen and hydrogen from Mars’ water

Porcine gene edits may allow such transplants without rejection.

Science can run along separate, even contradictory, paths simultaneously. At the same time as some research is revealing more and more about animal intelligence and self-awareness, other research seems to be pursuing novel ways in which humans can expand the exploitation of animals on the assumption that they lack these attributes. Growing appreciation for the intellectual and emotional lives of pigs, for example, is counterbalanced by news that the FDA has just certified that pigs bred by a company looking to harvest their organs for transplantation in humans are safe for food and medical use. The contrast can be head-snapping.

Revivicor, a subsidiary of Maryland-based biotech company United Therapeutics, received the FDA clearance in December 2020. To the FDA, this "represents a tremendous milestone for scientific innovation." Revivicor's chief scientific officer, David Ayares, tells Future Human that the company's "ultimate goal is to essentially have an unlimited supply of organs," and clearance for their "GalSafe pigs" brings that goal one step closer. 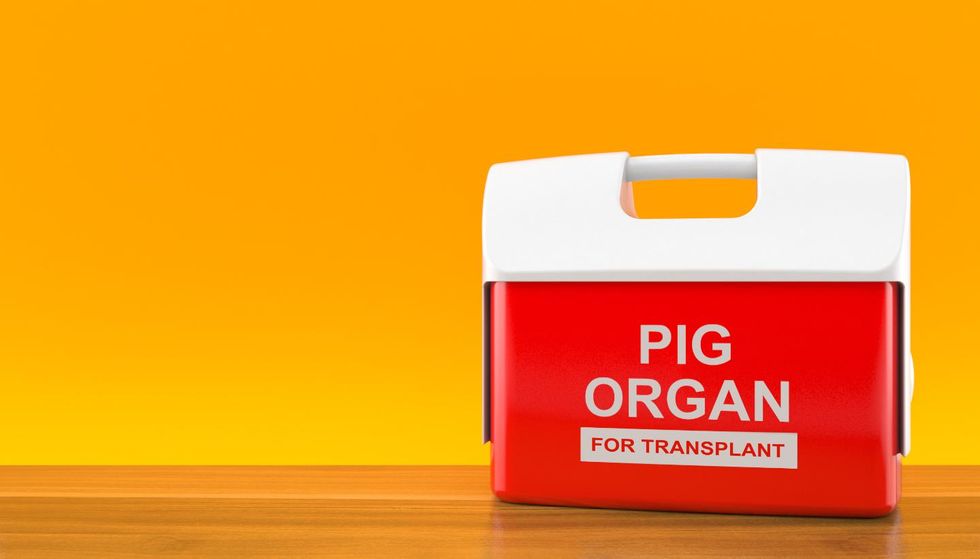 The U.S. Health Resources and Services Administration says that 109,000 Americans are currently waiting for organ transplants. Seventeen people die each day while waiting, and every nine minutes a new name goes on the waiting list.

Companies such as Revivicor are hoping to meet this need with xenotransplants, in which organs from non-human species are transplanted into humans. Scientists have been seeking a way to perform successful xenotransplantation for decades—a newborn referred to publicly as "Baby Fae" rejected a transplanted baboon heart as far back as 1984.

Ayares says his company is "right on the cusp" of overcoming such rejection issues, anticipating their first transplants may occur in 2021 or 2022.

Animal tissue may also find use in the formulation of medications.

The rejection problem stems from the human body's immune system expelling cells from other animals as foreign substances. (Rejection can also be an issue with human-to-human transplants.)

In 2003, Revivicor began development of GalSafe pigs by removing a gene that appears on the surface of porcine cells, and that produces a sugar called "alpha-gal." It's believed that alpha-gal sugar is the agent that causes the most acute rejections experienced with heart and kidney transplants.

Alpha-gal is also implicated in a meat food-allergy that occurs after a person is bitten by a Lone Star tick that leaves alpha-gal sugar behind in its victims' skin. Over time, the individual develops an allergy to pork, red meat, and lamb. Revivicor's Gal Pigs may one day be available to such people as non-allergenic pork.

The company, working with the National Institutes of Health, says that they managed to avoid rejection of pig hearts transplanted into baboons for six years, though these didn't replace the animals' own, original hearts. Rather, the pig hearts were transplanted into the abdomens of the baboons simply to assess rejection. Ayares also says GalPig kidneys survived in monkeys for over six months, though it's unclear if they were functioning as kidneys or simply implanted.

For human trials, Revivicor plans to begin with kidney transplants before attempting heart replacements. They expect to perform these early trials with people awaiting human transplants. XenoTherapeutics of Boston is already testing GalPig skin transplants as a temporary measure for burn victims as their own skin regenerates.

Other companies are also exploring porcine genetic modifications for xenotransplants, including eGenesis in Boston and its partner Qihan Biotech in Zhejiang, China, who are using CRISPR to perform gene edits.