​Amazon devices have colonized homes. 'Smart neighborhoods' may be next

Should law enforcement be using AI and cell phone data to find rioters?

Can you step in the same river twice? Wittgenstein vs. Heraclitus

Here's why you may want to opt-out of Amazon's new shared network.

If you say "Alexa" right now, there's a decent chance you'll activate one of the more than 100 million Amazon Echo devices the company has sold since 2014. Today, one in four adults in the U.S. own a smart speaker and surveys suggest a majority of American households now own at least one smart-home product. Globally, the smart-home market is projected to nearly double from $78 billion in 2020 to $135 billion in 2025.

As these devices become fixtures in homes, are neighborhoods next?

When asked about the future of Amazon devices at Web Summit 2020, here was the response from David Limp, the senior vice president of Devices and Services at Amazon:

"I won't outline the complete roadmap, but I will tell you, we start seeing extending outward from the home," Limp said.

The two "most obvious" places Amazon has its sights on: neighborhoods and cars, according to Limp. What might the neighborhood aspect look like? It's unclear exactly how Amazon sees the future of devices in public or private-community spaces, but Amazon's new Sidewalk network provides clues.

Sidewalk, which began rolling out in the U.S. in November, aims to create a shared network powered by Amazon devices. It's something like a community of Wi-Fi hotspots to which compatible devices can automatically connect.

Amazon Echo and Ring devices would serve as so-called Sidewalk Bridges that "share a small portion of your internet bandwidth which is pooled together to provide these services to you and your neighbors," Amazon writes.

Say you have a security camera in your detached garage that's not working because it's just out of your router's range. With Sidewalk, it'd be able to siphon off some of the Wi-Fi connection emitted from your neighbor's devices (if they enable Sidewalk). But that also means you'd be offering up some of your Wi-Fi bandwidth (500mb monthly maximum) to any compatible devices within about a half-mile.

Amazon frames Sidewalk as a sort of first step toward creating smart neighborhoods that utilize the so-called internet of things:

"When your device is connected to the Sidewalk network, you can connect to Alexa and offer more experiences for customers like keeping track of the things they care about most, whether it's their puppy, their keys, or their bicycle. Later this year, Tile devices will be supported on the Sidewalk network, enabling customers to keep track of their things by asking Alexa questions like 'Alexa, where are my keys?'" 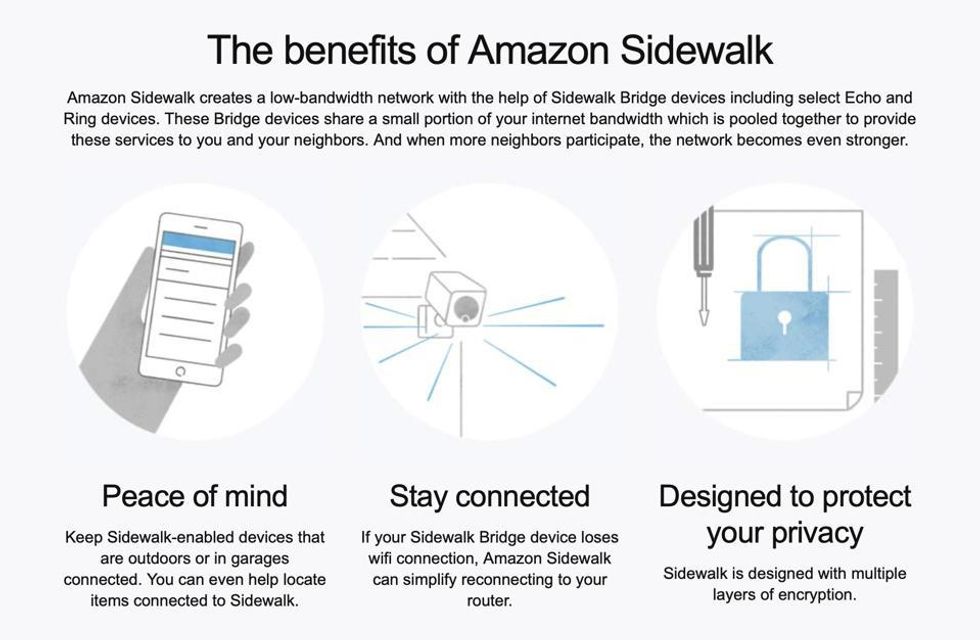 When Amazon first announced Sidewalk in 2019, CEO Jeff Bezos told reporters the system would fill a gap in wireless connectivity:

"It's a completely new way of thinking about intermediate-range wireless. There are a lot of things where Bluetooth is way too short-range, WiFi is way too high power, and so to have something that's still low-power, but that has much longer range is really a gap in the marketplace. [...] People don't even realize yet how important that intermediate range is going to be."

On the neighborhood level, this could prove convenient for people with compatible devices, as Jonathan Collins, research director at ABI Research, told Cities Today:

"Amazon Sidewalk has the potential to deliver low-cost, low-data, citywide mesh connectivity. It could certainly benefit from adoption within smart-city projects. For example, integrating Sidewalk into parking meters would bring low-cost network access for the city, but it will also provide more mesh nodes to strengthen network coverage and capacity."

"The initial concern is really about what all the devices connected to Sidewalk collect," Forrester security analyst Jeff Pollard told CNET. "If use cases like home automation or IoT devices make use of this technology, they generate telemetry data. Connected devices -- especially in the home -- give vast amounts of information about your behaviors and activities, which could also go to Amazon with this connectivity."

In addition to Amazon potentially learning more about your behaviors, Sidewalk could create vulnerabilities for outside parties to exploit. After all, hackers have already been able to gain access to Echo speakers and Ring cameras, and in 2019 Gizmodo reporters were able to map the "potential locations of up to tens of thousands of Ring cameras."

Anticipating concerns, Amazon published a white paper describing how Sidewalk uses three layers of encryption, doesn't reveal users' identities, and makes "it difficult for anyone, including Amazon, to piece together [a user's] activity history over time."

Difficult, but not impossible. Amazon said it's automatically enabling Sidewalk on Echo and Ring devices, though users can opt-out of the system. If you'd rather not serve as a guinea pig in Amazon's new shared network, here's how to disable it: 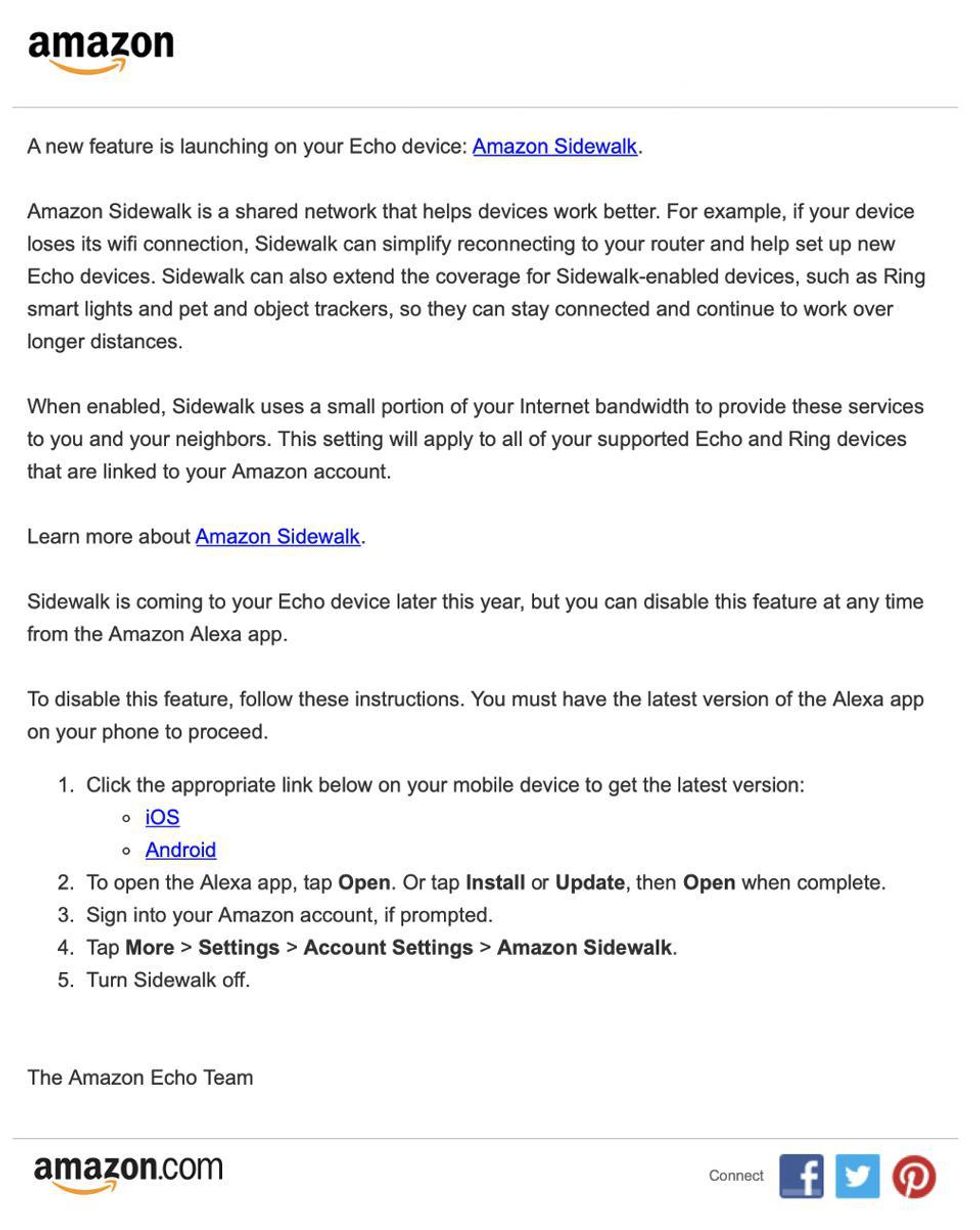