The space agency describes the process of landing rovers on Mars as "seven minutes of terror."

NASA's Perseverance is 18 days from landing on Mars and starting its mission of searching for ancient alien life in the planet's Jezero Crater.

But first Perseverance has to stick the landing. The spacecraft carrying the rover will be flying roughly 3.5 miles per second when it's approaching the thin Martian atmosphere. To slow the descent, the spacecraft will deploy a parachute and activate thrusters, while a shield will protect it from heat caused by friction. After separating from a protective capsule, a "skycrane" vehicle will lower the rover to the ground.

Perseverance will perform its EDL (entry, descent and landing) autonomously, the first spacecraft to ever do so. To save mission time and land safely, the rover will use Terrain-Relative Navigation technology to quickly identify and move to an optimal landing site within Jezero Crater.

But while Perseverance is the most technologically advanced rover ever launched into space, there's no guarantee it'll land safely on the Red Planet. After all, only 40 percent of missions sent to Mars have succeeded. What's more: NASA won't instantly know whether the landing succeeded because of the radio communication delay between Earth and Mars.

"Don't let anybody tell you different – landing on Mars is hard to do," John McNamee, project manager for the Mars 2020 Perseverance rover mission, said in a NASA blog post. "But the women and men on this team are the best in the world at what they do. When our spacecraft hits the top of the Mars atmosphere at about three-and-a-half miles per second, we'll be ready."

NASA plans to livestream the landing, starting at 2:15 p.m. EST on February 18.

"If all goes well, the public will be able to experience in high-definition what it's like to land on Mars – and hear the sounds of landing for the first time with an off-the-shelf microphone," NASA wrote. 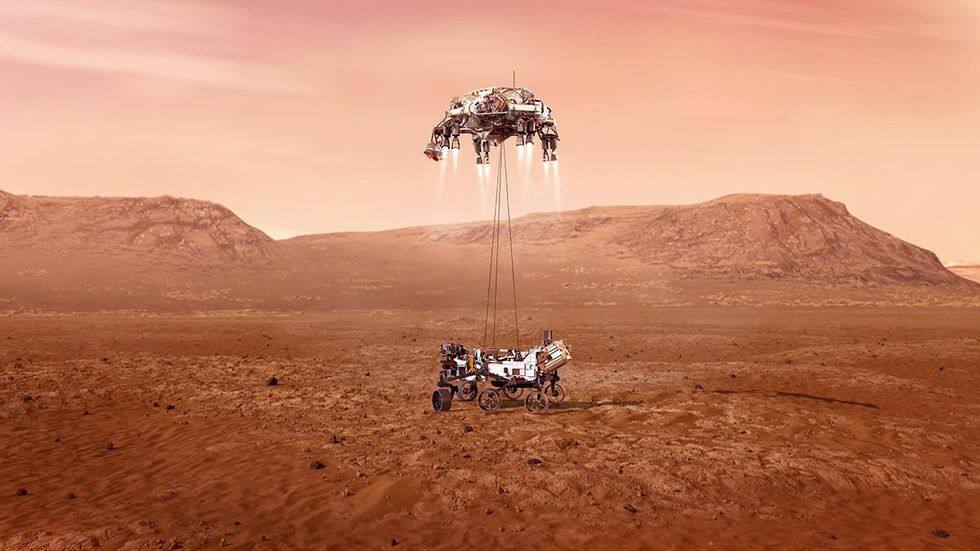 Illustration of NASA's "skycrane" lowering Perseverance onto the Martian surface.

Within days of landing, Perseverance is set to transmit high-resolution images of the Martian surface back to Earth. The rover is equipped with 19 specialized cameras, more than any mission before it.

"Mastcam-Z's cameras can zoom in on rock textures from as far away as a soccer field, while SuperCam will use a laser to zap rock and regolith (broken rock and dust) to study their composition in the resulting vapor," NASA wrote. "RIMFAX (short for Radar Imager for Mars' Subsurface Experiment) will use radar waves to probe geological features underground." 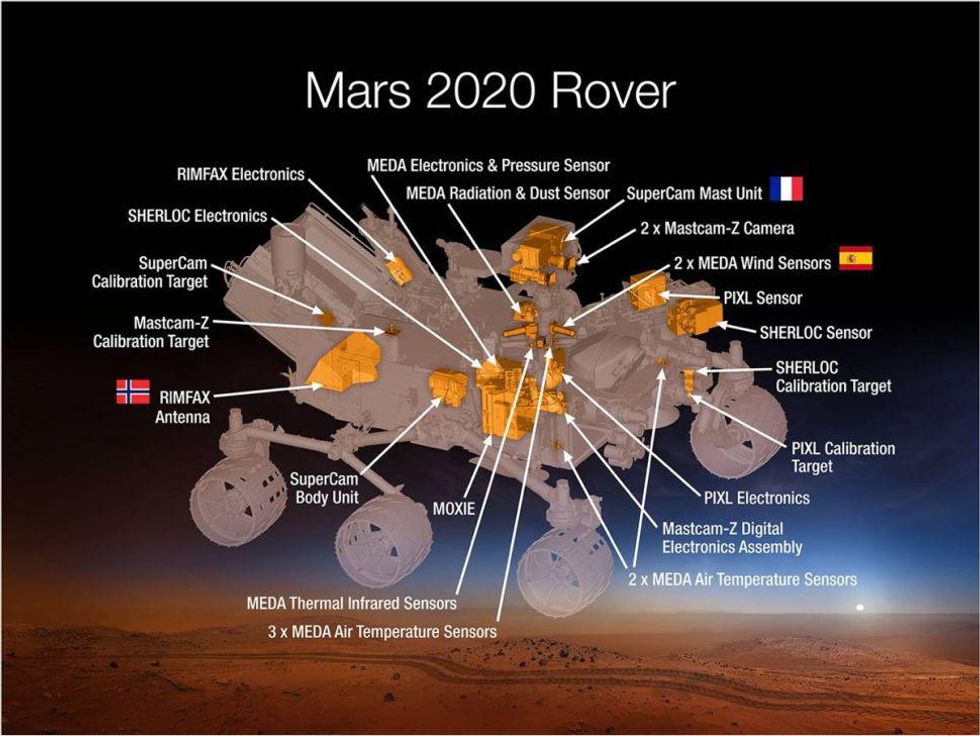 But the key focus is to determine whether life ever existed on Mars. That's why NASA plans to land the rover in Jezero Crater, which 3.5 billion years ago contained a body of water roughly the size of Lake Tahoe. NASA scientists think sediments in the crater may contain traces of organic molecules and, potentially, ancient microbial life.

There's good reason to think Mars may have once harbored life. Although the Red Planet is cold and barren today, it once had an atmosphere that was likely substantial enough to support a greenhouse effect and liquid water. But that was billions of years ago, so it's hard to nail down the specifics, especially without soil and rock samples.

"We know Mars had more atmosphere," Timothy Livengood of the University of Maryland, College Park and NASA's Goddard Space Flight Center, told NASA. "We know it had flowing water. We do not have a good estimate for the conditions apart from that — how Earthlike was the Mars environment? For how long?"

Perseverance could help clear up some of these mysteries about the Red Planet, the biggest of which is whether life exists outside of Earth. And if the rover finds no signs of ancient life? As microbiologist Andrew Steele told the Smithsonian Magazine:

"If you find a habitable environment and don't find it inhabited, then that tells you something," he said. "If there is no life, then why is there no life? The answer leads to more questions."