Usually, when scientists announce the discovery of a previously unknown animal, they have a specimen of the new arrival in hand. That's not the case, though, with Duobrachium sparksae, an amazing and beautiful ctenophore encountered 3,910 meters beneath the ocean surface about 40 kilometers off the coast of Puerto Rico. No one has met Duobrachium sparksae in person — we know of its existence only through several high-definition videos. ("Ctenophore" is pronounced teen-a-for, by the way.)

Says NOAA Fisheries' marine biologist Allen Collins in a NOAA press release, "It's unique because we were able to describe a new species based entirely on high-definition video."

It's also unique because it's such an exquisitely elegant organism.

Meet cute beneath the waves

The first encounter humanity had with Duobrachium sparksaeoccurred on April 10, 2015, when Deep Discoverer, a remotely operated vehicle, or ROV, came across the gelatinous wonder. Fortunately, the ROV sports cameras that were sufficiently high-definition to clearly capture Duobrachium sparksae's fine details.

The animal was first noticed in a video feed by Mike Ford of the shoreside science team working in NOAA's exploration command center far away, outside of Washington, D.C. The ROV was working the Arecibo amphitheater canyon. What Ford saw was, in his words, "a beautiful and unique organism."

Deep Discoverer's cameras produce externally high-resolution images, and are capable of measuring objects as small as a millimeter, just a little bit longer than the comb jelly's length.

While video-based animal identification can be controversial, there was little choice in this case. "We didn't have sample collection capabilities on the ROV at the time," says Collins. "Even if we had the equipment, there would have been very little time to process the animal because gelatinous animals don't preserve very well; ctenophores are even worse than jellyfish in this regard." 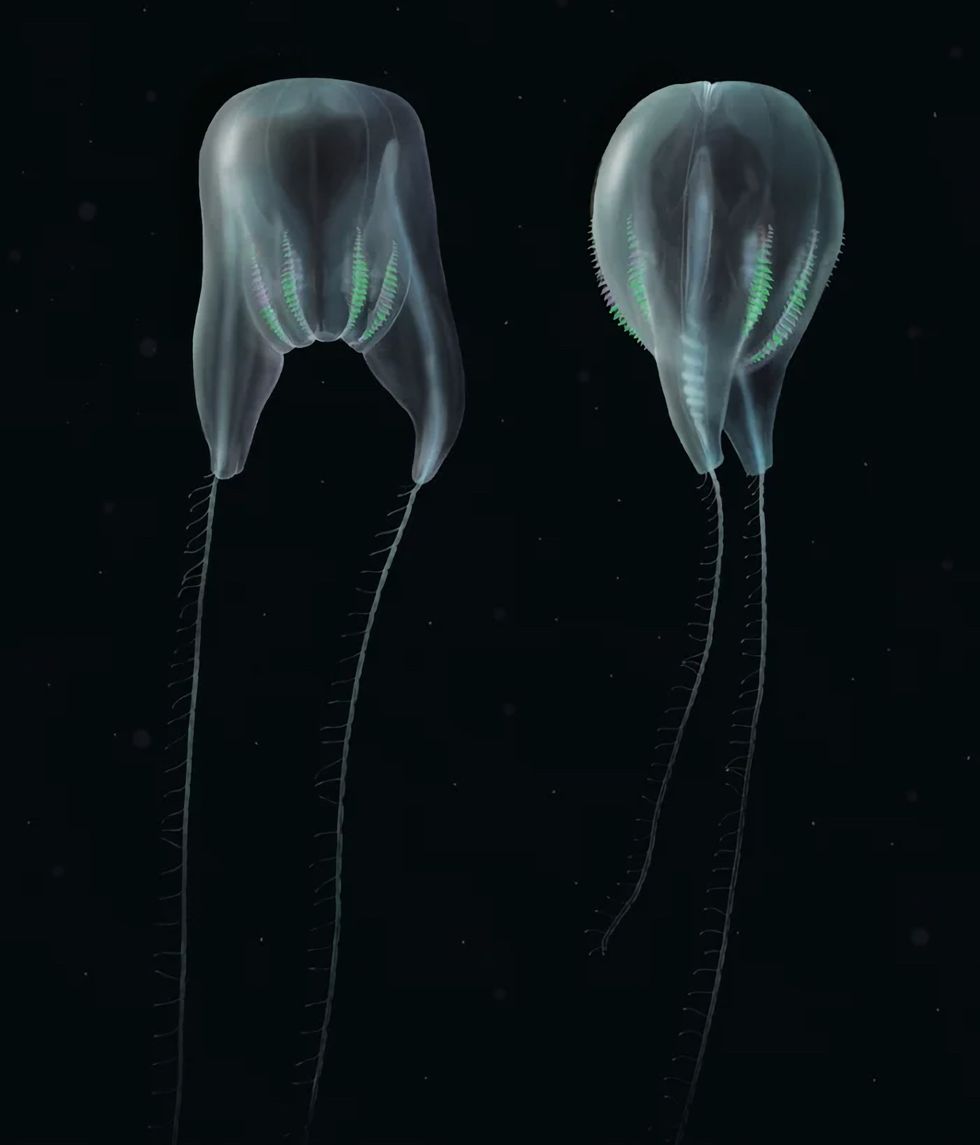 All told, three individuals were observed by the scientists in three separate encounters with the ROV. The image at the top of this article is from the second encounter. The fact that three separate examples were easily spotted leaves scientists hopeful that the creature is not a rarity in the seas.

Ford describes what they saw:

The role that Duobrachium sparksae plays in its ecosystem is not yet understood.

Finding a place in the family

The manner in which light refracted prismatically off the jelly's cilia combs immediately placed it in the ctenophore family as a start.

Collins explains, "We don't have the same microscopes as we would in a lab, but the video can give us enough information to understand the morphology in detail, such as the location of their reproductive parts and other aspects."

"We went," says Ford, "through the historical knowledge of ctenophores and it seemed clear this was a new species and genus as well. We then worked to place it in the tree of life properly."

The videos — the only "specimens" there are of Duobrachium sparksae — are now publicly accessible as part of the Smithsonian National Museum of Natural History Collection.