A new study shows our planet is much closer to the supermassive black hole at the galaxy's center than previously estimated.

If you think Earthly matters haven't been going well already, it also turns out that our planet is much closer to the supermassive black hole at the center of the galaxy than we imagined. New observation data allowed researchers to improve the modeling of the Milky Way Galaxy, showing Earth is moving 7 km/s (~16,000 mph) faster and is 2,000 light years closer to the supermassive black hole Sagittarius A*.

The more precise information came from 15 years worth of data collected by the Japanese radio astronomy project VERA, which is a collection of acronyms standing for VLBI Exploration of Radio Astrometry (with "VLBI" meaning Very Long Baseline Interferometry). The project started in 2000 and has the goal of mapping the Milky Way's three-dimensional velocity and spatial structures.

VERA employs interferometry to pull together and combine data from radio telescopes all over the Japanese archipelago. This technique allows the project to get astounding resolution, as good as a telescope with a 2300 km diameter. The measurement is so accurate at this precise resolution of 10 micro-arcseconds, that it would be sufficiently sharp to pick out a U.S. penny if it was somehow left on the Moon's surface.

The VERA Astrometry Catalog and observations made recently by other researchers allowed the astronomers to put together a position and velocity map with a new center for the Galaxy. It's a point around which everything in the Galaxy revolves. 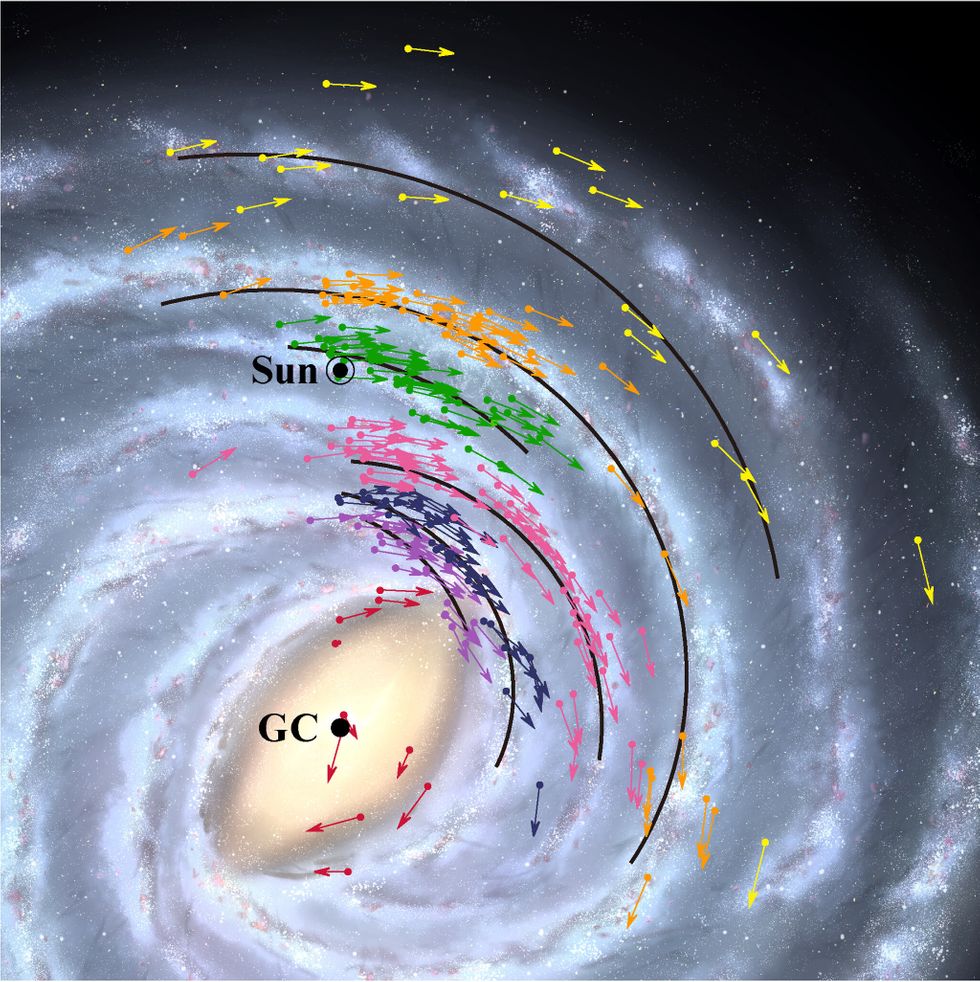 Arrows on this map show position and velocity data for the 224 objects utilized to model the Milky Way Galaxy. The solid black lines point to the positions of the spiral arms of the Galaxy. Colors reflect groups of objects that are part of the same arm, while the background is a simulation image.

The new map claims this center, along with the supermassive black hole it contains, is about 25,800 light-years away from Earth. Notably, this is closer than the distance of 27,700 light years established as the official value in 1985 by the International Astronomical Union.

The new map's velocity component also differentiated the velocity of the planet, showing that it's traveling at 227 km/s in its orbit around the Galactic Center. That's 7 km/s faster than the previously "official" speed of 220 km/s.

VERA next turns its attention to other objects, especially those close to the supermassive black hole at the galaxy's center.