Mars had up to 20 separate ice ages, discover scientists

A new study analyzed Martian glaciers to discover that the planet had numerous ice ages.

Geologists unraveled the mysteries of Martian glaciers, concluding that the planet had up to 20 separate ice ages. The groundbreaking new analysis promises to substantially boost our understanding of the Red Planet.

Mars is covered in glaciers, frozen upon the surface of the Red Planet for over hundreds of millions years. Geologists have debated whether the glaciers were all a result of one long Ice Age or caused by individual ice ages over a long span of time. As ice ages are caused by the changing tilt of a planet's axis (also known as obliquity), the results promise to show scientists the variations in the Martian orbit and climate. Pinpointing the timeline of the ice ages can also help understand what kinds of things may be trapped under the ice, including rocks, fossils, microbes, and gases.

"There are really good models for Mars' orbital parameters for the last 20 million years," said Levy in a press release. "After that the models tend to get chaotic."

Levy's team looked at 45 glaciers using high-resolution images from the Mars Reconnaissance Orbiter satellite. It's able to achieve resolution of 25 cm per pixel, which is good enough to "see things the size of a dinner table," explained Levy. 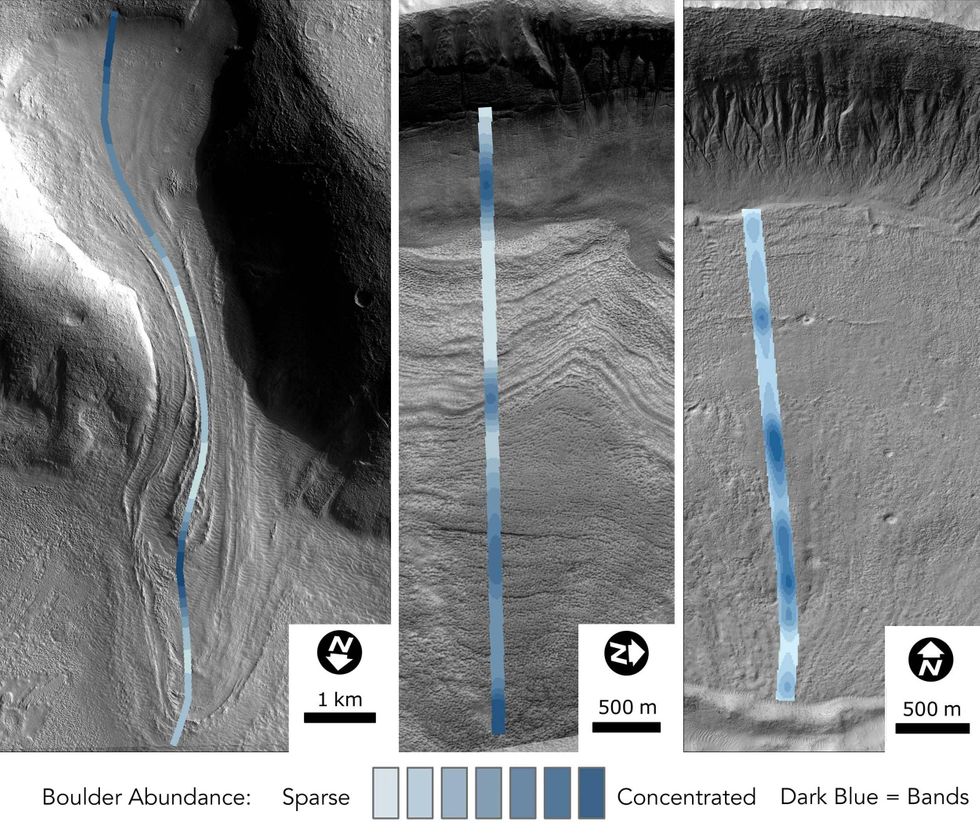 Boulders were found grouped in distinct bands on the surfaces of the Martian glaciers, suggesting multiple ice ages over hundreds of millions of years.

The professor used both artificial intelligence and 10 university students, who over two summers analyzed about 60,000 rocks. They focused on the distribution, clustering, and the sizes of the rocks, looking for signs of erosion. The team's so-called "virtual field work" allowed the scientists to map the boulders across Martian glaciers.

The scientists saw that to their surprise, the rocks moved along the inside of the glaciers, rather than eroding in predicted fashion. The rocks also seemed grouped across the glaciers, suggesting separate flows that took place over time, rather than being caused by one major event.

Using the data, the researchers found that Mars went through from six to 20 distinct ice ages over 300 to 800 million years.

"These glaciers are little time capsules, capturing snapshots of what was blowing around in the Martian atmosphere," shared Levy. "Now we know that we have access to hundreds of millions of years of Martian history without having to drill down deep through the crust — we can just take a hike along the surface."

Check out the paper for yourself, published in PNAS (Proceedings of the National Academy of Sciences).