A new study looked at how California black worms work together to form "worm blobs" in order to model their behavior in moving swarms of simple robots. The "blob" formation, which can range in size from 10 to 50,000 worms, serves to protect the creatures from drying out and withstanding threats like strong heat.

The researchers from Georgia Institute of Technology focused on how thousands of the worms (Lumbriculus variegatus), about a centimeter in length each, can intertwine into an "active matter," which behaves as one. This self-organized shape-shifting blob allows the worms to achieve much more complex outcomes together than they would without getting hitched up.

The work promises to help engineers working on swarm robots to understand and adapt the mechanics of how such blobs behave.

Saad Bhamla, an assistant professor at Georgia Tech's School of Chemical and Biomolecular Engineering, highlighted that being in a group is beneficial to the worms' survival:

"We were curious about why these worms would form these living blobs," said Bhamla. "We have now shown through mathematical models and biological experiments that forming the blobs confers a kind of collective decision-making that enables worms in a larger blob to survive longer against desiccation."

The scientists also showed that the worms in a blob can move together, exhibiting unique collective behavior. The capabilities of the blob are much more than anything the individuals can do on their own. Studying these blobs helps researchers who are looking to transfer the key traits of living systems to ones designed by humans. Swarm robots, in particular, are built around the idea that individual robots must collaborate to be able to engage in complex actions.

The worms were studied closely by the research associate Yasemin Ozkan-Aydi, whose experiments included testing the blob's responsiveness to temperature and light changes and creating a "worm gymnasium", which allowed her to gauge the strength of the worms. To create a worm blob, she took the worms out of water. When they couldn't find the water, they came together in a ball-like blob. The worms would trade off on who would be on the outside of the blob, where most evaporation took place. This allowed the collective to suffer less of an effect from the lack of liquid. The researcher concluded that being in a blob helped the worms survive 10 times longer when being out of water, compared to single worms. 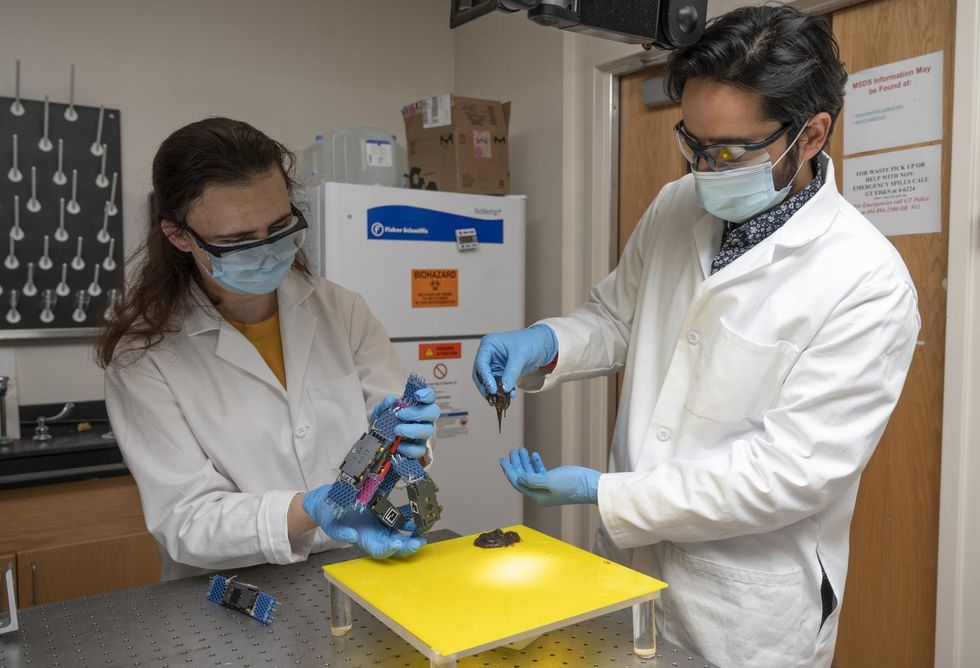 Professor Daniel Goldman, in whose lab these experiments were carried out, pointed to the unexpected smartness of what the worms did.

"They would certainly want to reduce desiccation, but the way in which they would do this is not obvious and points to a kind of collective intelligence in the system," explained Goldman. "They are not just surface-minimizing machines. They are looking to exploit good conditions and resources."

This intelligence of the worms was also on display in heat experiments, where the cooperation between the worms in the blob allowed them to slink away from hot spots, dramatically improving their survival chances. Moving as a blob, 95% of the worms made it to the cold side.

Ozkan-Aydin incorporated the observations of worm behavior into small robotic blobs made of "smart active particles" or "smarticles." She pinned six 3D-printed robots which featured two arms and two light sensors in a mesh, essentially entangling them similarly to the worms. She then programmed and tested different movements the robots could perform, finding that the robot swarms "generate emergent behavior that is similar to what we saw in the worms."

You can check out the new study "Collective dynamics in entangled worm and robot blobs" published in PNAS, the Proceedings of the National Academy of Sciences.