Take a virtual tour of a million newly undiscovered galaxies

Astronomers have mapped about a million previously undiscovered galaxies beyond the Milky Way, in the most detailed survey of the southern sky ever carried out using radio waves.

Astronomers have mapped about a million previously undiscovered galaxies beyond the Milky Way, in the most detailed survey of the southern sky ever carried out using radio waves.

While past surveys have taken years to complete, ASKAP's RACS survey was conducted in less than two weeks — smashing previous records for speed. Data gathered have produced images five times more sensitive and twice as detailed as previous ones.

What is radio astronomy?

Modern astronomy is a multi-wavelength enterprise. What do we mean by this?

Well, most objects in the universe (including humans) emit radiation over a broad spectrum, called the electromagnetic spectrum. This includes both visible and invisible light such as X-rays, ultraviolet light, infrared light and radio waves.

To understand the universe, we need to observe the entire electromagnetic spectrum as each wavelength carries different information.

Radio waves have the longest wavelength of all forms of light. They allow us to study some of the most extreme environments in the universe, from cold clouds of gas to supermassive black holes.

Long wavelengths pass through clouds, dust and the atmosphere with ease, but need to be received with large antennas. Australia's wide open (but relatively low-altitude) spaces are the perfect place to build large radio telescopes.

We have some of the most spectacular views of the centre of the Milky Way from our position in the Southern Hemisphere. Indigenous astronomers have appreciated this benefit for millennia.

Radio astronomy is a relatively new field of research, dating back to the 1930s.

The first detailed 30cm radio map of the southern sky — which includes everything a telescope can see from its location in the Southern Hemisphere — was Sydney University's Molonglo Sky Survey. Completed in 2006, this survey took almost a decade to observe 25% of the entire sky and produce final data products.

Our team at CSIRO's Astronomy and Space Science division has smashed this record by surveying 83% of the sky in just ten days.

With the RACS survey we produced 903 images, each requiring 15 minutes of exposure time. We then combined these into one map covering the entire area.

The resulting panorama of the radio sky will look surprisingly familiar to anyone who has looked up at the night sky themselves. In our photos, however, nearly all the bright points are entire galaxies, rather than individual stars.

Take our virtual tour below.

Astronomers working on the catalogue have identified about three million galaxies — considerably more than the 260,000 galaxies identified during the Molonglo Sky Survey.

Why do we need to map the universe?

We know how important maps are on Earth. They provide crucial navigational assistance and offer information about terrain which is useful for land management.

Similarly, maps of the sky provide astronomers with important context for research and statistical power. They can tell us how certain galaxies behave, such as whether they exist in clusters of companions or drift through space on their own.

Being able to conduct an all-sky survey in less than two weeks opens numerous opportunities for research.

For example, little is known about how the radio sky changes over timescales of days to months. We can now regularly revisit each of the three million galaxies identified in the RACS catalogue to track any differences.

Also, some of the largest unanswered questions in astronomy relate to how galaxies became the elliptical, spiral, or irregular shapes we see. A popular theory suggests large galaxies grow via the merger of many smaller ones.

But the details of this process are elusive and difficult to reconcile with simulations. Understanding the 13 billion or so years of our universe's cosmic history requires a telescope that can see across vast distances and accurately map everything it finds. 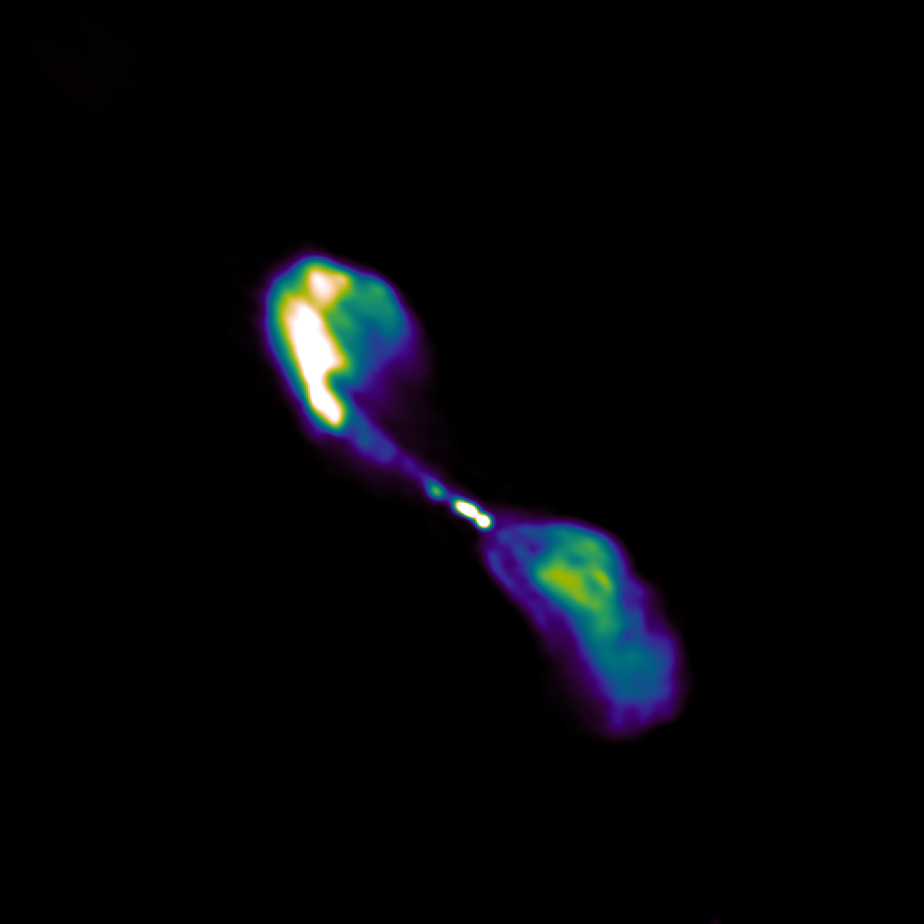 The giant Centaurus A galaxy was one elliptical galaxy captured in the RACS survey. Although more than ten million light years away, it's one of the closest radio galaxies to Earth. You can see its 'intensity' represented by different colours. (CSIRO, Author provided)

The CSIRO's RACS survey is an amazing advance made possible by huge leaps in space tech. The ASKAP radio telescope, which became fully operational in February last year, was designed for speed.

Over the next few years, ASKAP is expected to conduct even more sensitive surveys in different wavelength bands.

In the meantime, the RACS survey catalogue is greatly improving our knowledge of the radio sky. It'll continue to be a key resource for researchers around the world.

Full resolution images can be downloaded from the ASKAP data archive.