Four scenarios for the next supercontinent

The arc of geological history is long, but it bends towards supercontinents – so, what will the next one look like? 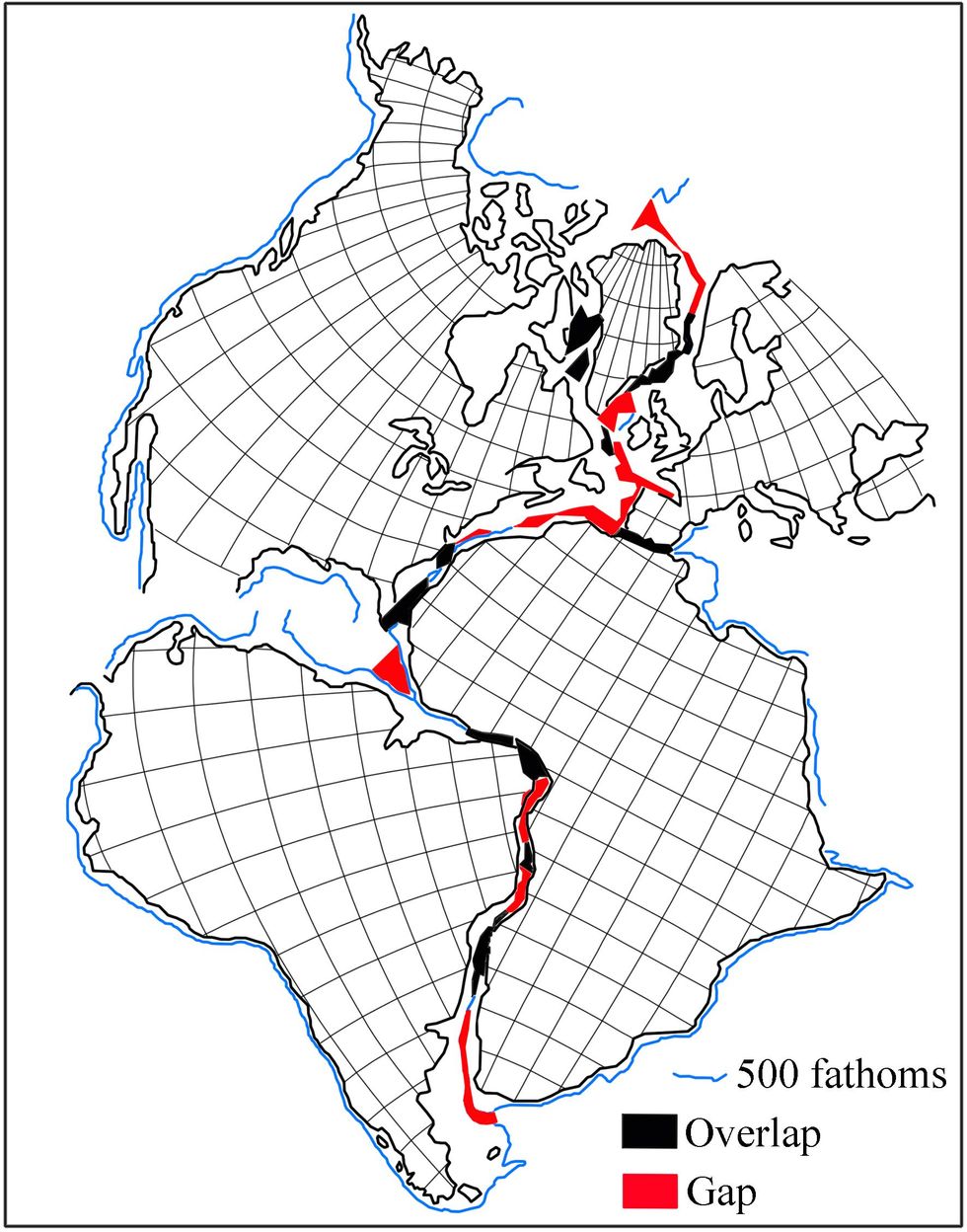 How the American, African and European continents once fit together before the Atlantic – and may one day again, if and when the local 'Wilson cycle' reverses.

For things so massive and seemingly immovable, continents are pretty hard to pin down. Of course, that's because they do move, if only at the speed at which your fingernails grow: about two inches (5 cm) per year.

Accelerate the film of Earth's geology, and you see the landmasses dance across the globe like islands of foam on a running bath. One peculiarity of our drifting continents is that they tend to combine, over massive amounts of time, into one single supercontinent. It helps that the Earth is round, unlike your bath.

Then, millions of years later, tectonic forces cause the supercontinent to break up again – only for the individual continents to recombine much, much later. All at fingernail speed.

Norwegian map of what the supercontinent of Columbia/Nuna may well have looked like, 1,590 million years ago.

Here's one question with an un-pin-downable answer: How many supercontinents have there been in Earth's deep past? At least three or at least seven; as many as 11 or perhaps even a few more: like the continents themselves, scientific theories diverge. Here are some of the usual suspects (most recent first, ages are approximate):

That's if we spool back the tape. What happens if we fast-forward? Even though Pangea, the last supercontinent, broke up almost 200 million years ago, geologists are pretty sure there'll be another one, but not for some time to come. Right now, we're about halfway through a 'supercontinent cycle'. The next one will be around between 200 and 300 million years from now.

John Tuzo Wilson (1908-93) refined and championed the theory of plate tectonics in the 1960s, when it was still controversial. He was the first non-U.S. citizen to become president of the American Geophysical Union.

That brings us to the next question with an answer that's hard to pin down: What will that next supercontinent look like? That is, of course, unknowable, as no one alive today will be around to check. But one can speculate. Using what we know about the tectonic forces that power the movements of continental plates, three scientists line up four plausible scenarios for the formation of the next supercontinent.

In Back to the future: Testing different scenarios for the next supercontinent gathering, Hannah S. Davies, J.A. Mattias Green and Joāo C. Duarte present four supercontinents, each the outcome of a different tectonic what-if.

Each scenario is a different combination of two basic drivers of continental conglomeration (and fragmentation): the supercontinent cycle itself, and the so-called Wilson cycle.

In 1966, Canadian geologist John Tuzo Wilson proposed that the Atlantic had opened up along a zone where another ocean had previously existed. A 'Wilson cycle' therefore describes the cyclical opening and closing of ocean basins. Since those aren't necessarily in sync with supercontinent cycles, they can lead to various outcomes – supercontinents of different shapes and at different types.

The next supercontinent will take shape when at least one ocean closes. That can happen in one of two ways:

In their paper, the researchers line up and standardise the evidence for four well-known scenarios on future supercontinent formation: 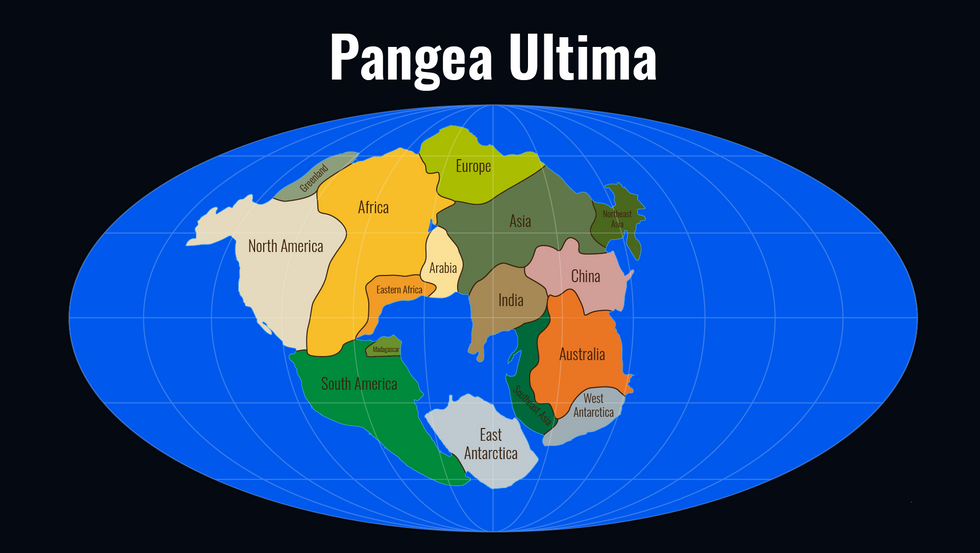 'Ultimate' Pangea would be a remake of the 'old' Pangea, more or less.

Africa is the key continent here; first by colliding with Europe to form the new continent of Eurafrica, and ultimately as the keystone tying South and North America, Europe and Asia together. Remnants of the Atlantic and Indian oceans reincarnate as the 'ultimate' Mediterranean, closed off from the world ocean by East Antarctica. 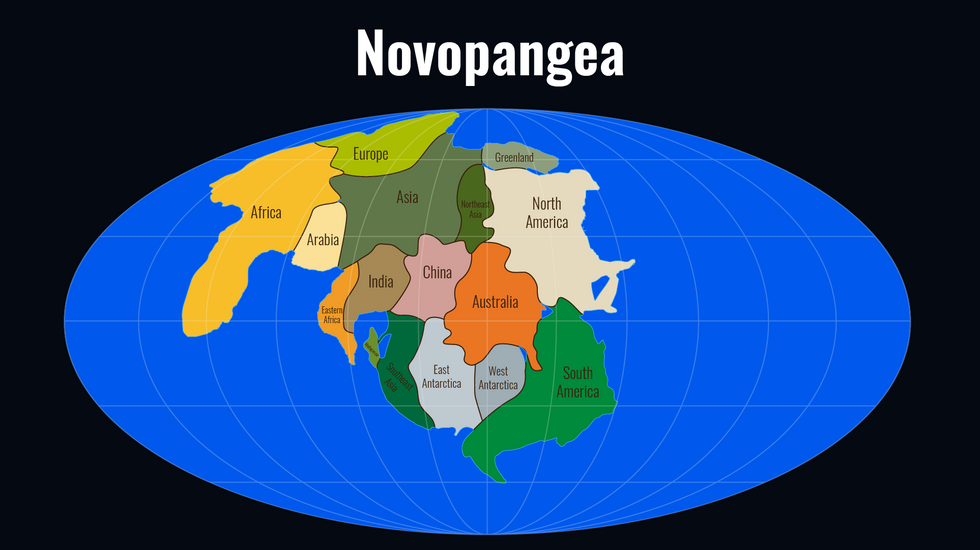 How Novopangea might come to be: the Pacific closes and a new ocean forms along the East African Rift.

A 'classic' extroversion scenario leads to the closure of the Pacific Ocean, and to a 'new' Pangea – not just a re-forming of the old one. The East African Rift keeps growing, developing into a new ocean, replacing the Indian one. East Africa gets stuck against India's west coast.

Aurica: America in the middle 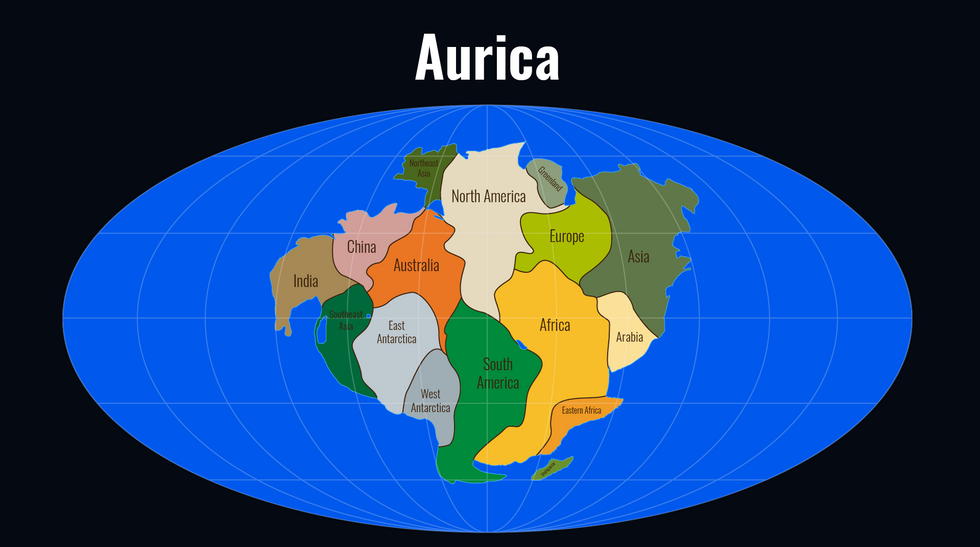 Two Wilson cycles in sync with a supercontinent cycle, and hey presto: Aurica.

This requires the opening-up of at least one new ocean – for example, at a large rift along the present-day border between India and Pakistan. This new Pan-Asian Ocean, merged with the Indian Ocean, pushes these areas apart, turning them from next-door neighbors into lands on either side of Aurica.

Australia is now entirely landlocked, between Antarctica, East Asia and North America. Europe and Africa have collided with the Americas from the other side. To the south, Madagascar stubbornly continues its separate course. 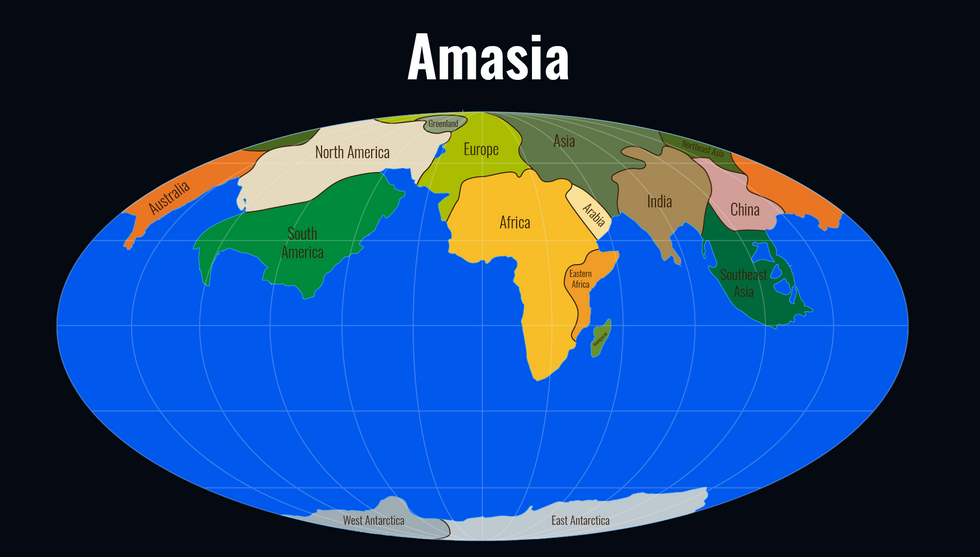 In the Amasian scenario, almost all continents would be joined 'at the top'.

The Arctic Ocean closes. Almost all continents are joined at the 'top of the world', with the exception of Antarctica, the only one not drifting northward. It'll be a short hop from North America to North Africa, with Southern Europe acting as a land bridge in between. South America has repositioned itself, with its western edge against the eastern flank of North America.

These images produced by Pilgrim-Ivanhoe, reproduced with kind permission. Original context here. Images based on the aforementioned article: Back to the future: Testing different scenarios for the next supercontinent gathering, by Hannah S. Davies, J.A. Mattias Green and João C. Duarte, published in Global and Planetary Change (Vol. 169, October 2018).