Citizen scientists are filling research gaps created by the pandemic 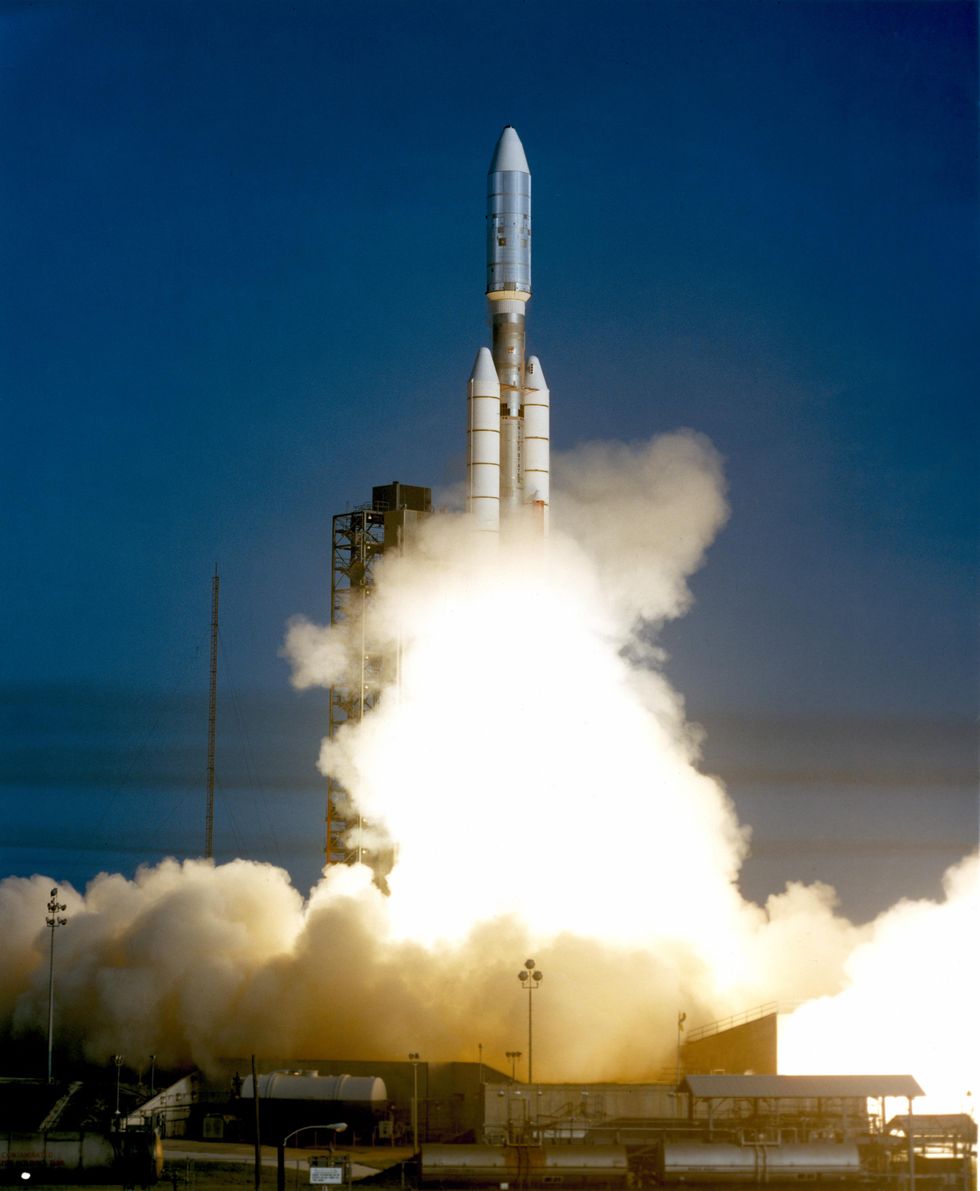 Voyager 1 lifting off from Cape Canaveral on 5 September 1977.

What's the farthest place that humanity has gone? For a practical answer to that question rather than a philosophical one, direct your gaze to Ophiuchus, an equatorial constellation also known as Serpentarius.

Speeding towards Rasalhague and the other stars that make up the 'Serpent-bearer' is Voyager 1, the furthest human-made object in the Universe. It's currently 14.1 billion miles (22.8 billion km) from the Sun and speeding away at roughly 38,000 mph (61,000 km/h).

That's too far to observe Voyager 1 twinkle in the night sky. But you can turn the tables and see what it sees, as it looks back at us. Via NASA's Eyes website (and app), you can pay a virtual visit to where the spacecraft is now and explore its vantage as it hurtles towards the edge of the solar system.

There's Jupiter and Saturn, so seemingly close together; and Uranus, Pluto and Neptune, their orbits farther away. At the center of it all, the Sun. Nearby, the inner planets, including Earth: so close to it that they don't even get a name-tag. Those planets and their trajectories are so familiar yet now so distant, it's enough to make you homesick by proxy!

You can click and drag your way around Voyager 1, shifting your perspective to explore the region – spotting Sedna, Halley's Comet and a few other less familiar members of our solar family.

Where it's at: this is what the view of the solar system is from Voyager 1 as it speeds into interstellar space.

Although it's still sending back data to Earth, most of Voyager 1's instruments have now been powered down, and the craft is expected to go entirely dead by 2030 at the latest; but its incredible journey isn't over. In fact, it will most likely continue long after you, I and everything we know will have disappeared. Here's how it all started.

Voyager 1 is a small craft, weighing barely 1,820 lb. (825.5 kg). Its most prominent feature is a 12-ft (3.7-m) wide dish antenna, for talking with Earth – when there's no straight line of communication, a Digital Tape Recorder kicks in, able to hold up to 67 MB of data for later transmission. In all, Voyager 1 carries 11 different instruments to study the heavens. 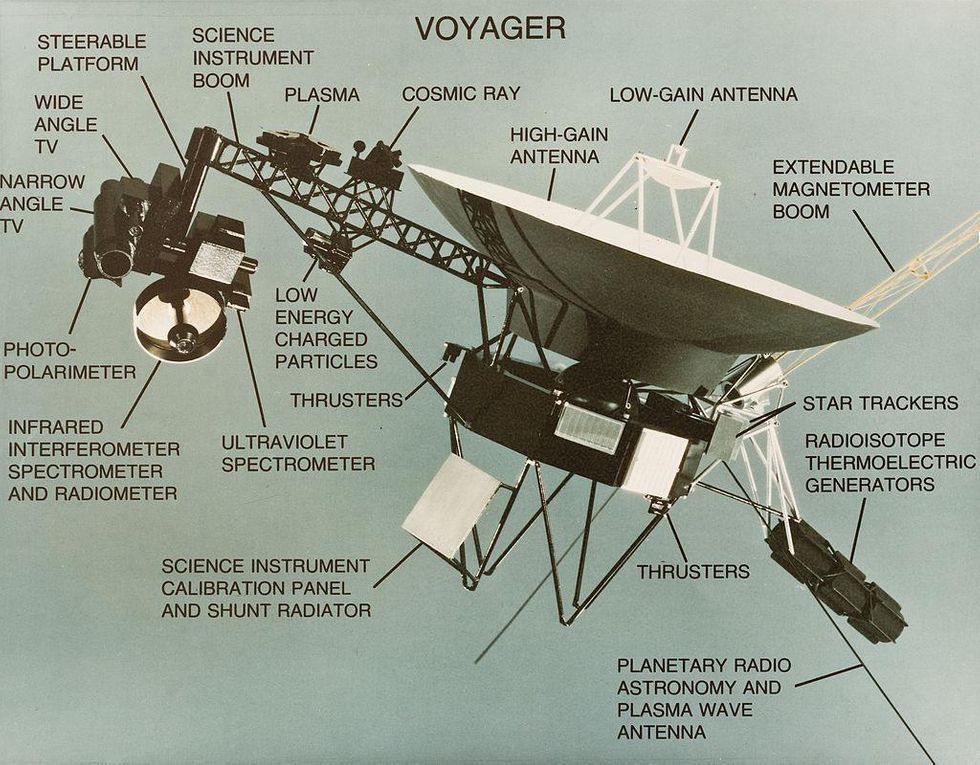 Voyager 1 and its range of instruments, which have been progressively shut down as the craft's power waned.

The idea for the Voyagers, 1 and 2, grew out of the Mariner program's focus on the outer planets. The Voyagers got their own name as their field of study started to diverge towards the outer heliosphere and beyond.

The heliosphere is the 'solar bubble' created by the solar wind, i.e. the plasma emitted by the Sun. The region where solar wind slows down to below the speed of sound is called the termination shock. The heliopause is the outer limit of this bubble, where outward movement of solar plasma is nullified by interstellar plasma from the rest of the Milky Way. Beyond lies interstellar space.

The Voyagers were built to withstand the intense radiation in those far reaches of space – in part by applying a protective layer of kitchen-grade aluminum foil.

Humanity's farthest probe into the Universe was launched on September 5, 1977, confusingly 16 days after Voyager 2. More than 43 years later, the craft is still sending data back to Earth – but not for very much longer. Here are a few snapshots for the family album: 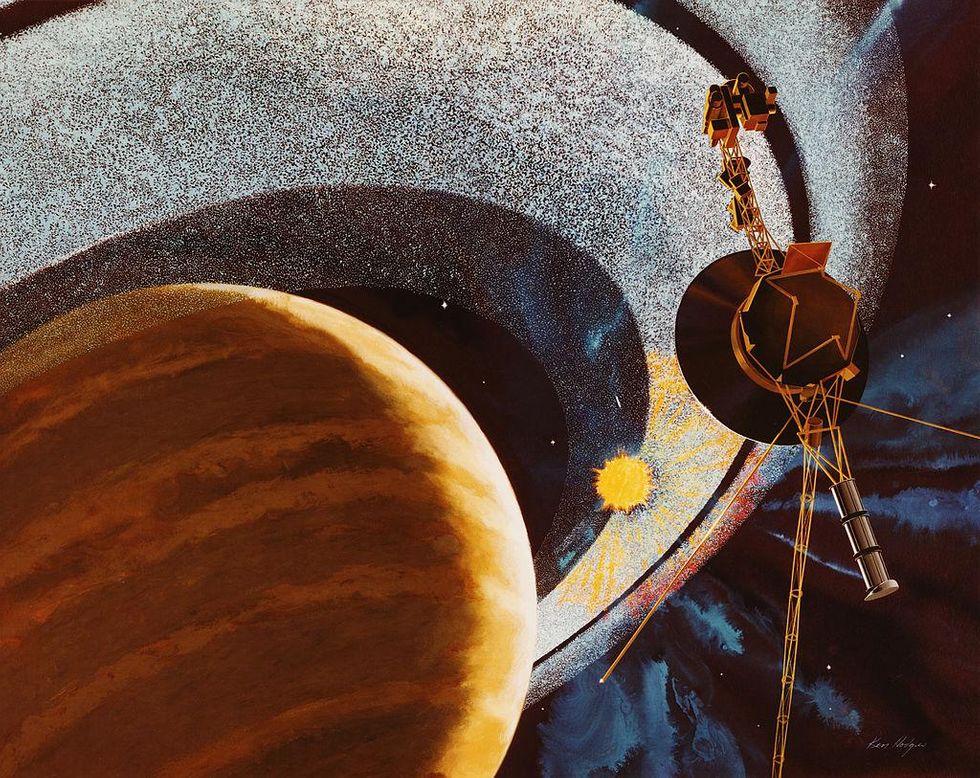 Artist's impression of Voyager 1 passing the rings of Saturn in 1980.

While both Voyagers have now left the heliosphere, that doesn't mean they're outside the solar system yet. The latter is defined as the vastly larger region of space, populated by all the bodies that orbit the Sun. The limit of the Solar system is the outer edge of the Oort cloud.

As available power declined, more and more of the Voyager 1's instruments and systems have been turned off – prioritising the instruments that send back data on the heliosphere and interstellar space. It is expected that the last instruments will cease operation sometime between 2025 and 2030.

Travelling at just about 61,200 km/h (38,000 mph) relative to the Sun, the craft will need 17 and a half millennia to cover the distance of a single light year. Proxima Centauri, the closest star to the Sun, is 4.2 light-years away. If Voyager 1 were going in that direction, it would need almost 74 millennia to get there. But it isn't. So, what is next? 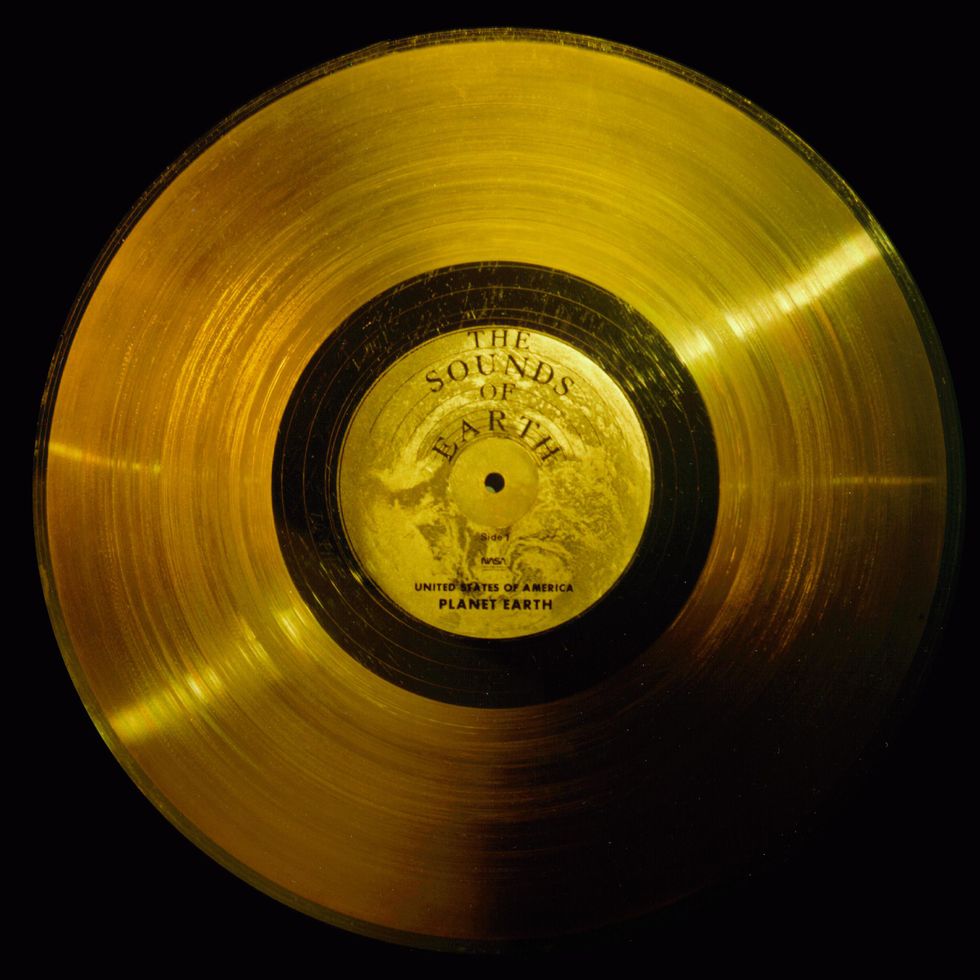 Flying on board Voyagers 1 and 2 are identical 'golden' records, carrying the story of Earth far into deep space.

Both Voyager 1 and 2 carry a Golden Record that contains pictures, scientific data, spoken greetings, a sampling of whale song and other Earth sounds, and a mixtape of musical favorites, from Mozart to Chuck Berry.

Perhaps in a distant future and place, some alien intelligence with a record player will have a listen to Blind Willie Johnson hum Dark Was the Night, Cold Was the Ground, and think of us: "What a strange old planet that must have been."

Image taken from the Voyager 1 page at NASA's Eyes.