No, it's not the Putin Price Hike, despite Joe Biden's claims

Last year, Joe Biden and his administration claimed that inflation was 'transitory.' This year, Vladimir Putin gets the blame. Next year, Biden will blame American businesses. And the beat goes on.

Politicians adore buzzwords and talking points, and the Joe Biden White House and the Democratic Party use them just as much as Donald Trump and the Republicans did when they dominated Washington's circus. Last year, the Biden administration's motto was that inflation was "transitory," indicating that it would pass quickly. The faithful repeated the newest word of life: "Transitory," from Biden (when he remembered what his talking points were supposed to be) to Paul Krugman in the New York Times.

As the cold fact sets in that this inflation is not going away anytime soon, the Biden administration and its political supporters have come up with new talking points and buzzwords, including the rebranding of inflation itself. No longer do the faithful dutifully repeat “transitory” when asked about skyrocketing consumer and producer prices; today the holy writ is “Putin’s price hike.”

According to the Biden administration and its allies, inflation is the product of an unholy collaboration between Vladimir Putin and American oil giants. What evidence do we have for this? We have confirmation from the highest experts on the subject, Senator Elizabeth Warren and Federal Reserve Chairman Jerome Powell.

In a recent op-ed for the New York Times, Warren informs her readers that all that is needed to control inflation is some tough talk from Biden along with a new regime of price controls. She writes:

We can also act quickly to rein in costs for middle-class families. In the very short term, that means stopping companies from jacking up prices to boost their profits. Price increases are driven by many factors, including pandemic disruptions to global supply chains and Vladimir Putin’s war in Ukraine. But when the Kroger chief executive, Rodney McMullen, said “a little bit of inflation is always good in our business,” it is no surprise that, by a margin of two-to-one, American voters don’t buy the explanation that companies are just passing along costs. Instead, they blame corporations for raising prices to boost their own profits. Even Fed Chair Jerome Powell, a conservative Republican, acknowledged that giant corporations raise prices simply “because they can.”

Elsewhere, Warren claims that the answer for lower prices lies in enforcement of antitrust laws, echoing Joe Biden’s recent claim that our economy suddenly has become a nest of price-gouging monopolies. Warren goes on to say:

Congress should pass laws to reinvigorate competition and three quarters (of American voters) strongly believe that oil and gas companies should not make gobs of money off this energy crisis. Beefing up regulators’ authority to end price-gouging, breaking up monopolies, and passing a windfall profits tax is a good start.

According to Warren, the Federal Reserve's policy of putting trillions of dollars directly into the hands of consumers to offset the covid lockdowns and limitations had nothing to do with the current situation. Instead, we are asked to assume that greedy businessmen suddenly (and for no apparent reason) began to raise prices in order to increase profits. They chose to pounce when a hostile regime took over the federal government, despite the fact that they had not hiked prices while Trump was president (despite the fact that Trump himself was a selfish businessman who would not hesitate to raise prices).

Interestingly, neither Biden nor Warren are willing to criticize Powell or the Trump administration, despite the fact that both men have played a significant role in the current inflationary mess. Instead, they've decided to blame private sector and ask for price controls that even Jimmy Carter's administration refused to enact, despite the fact that official inflation rates were greater then than they are now. The problem is easy to spot in the three graphs below: a massive increase in the money supply, all backed by the Fed, which embarked on an asset-buying binge to fund the monstrous mess. 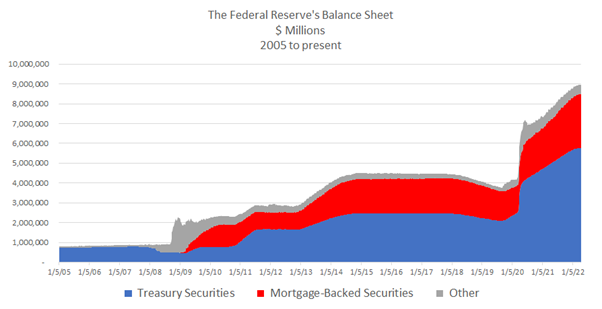 The second and third graphs show the growth of the Fed balance sheet, and one can see that, like the spike in money growth, the balance sheet exploded during the covid lockdowns and is still metastasizing to the point where Fed asset purchases are consisting of about 40 percent of US gross domestic product. Jeff Deist explains what happened:

First, consider the two covid stimulus bills passed by Congress in 2020 and 2021. These pumped more than $5 trillion directly into the economy in the form of payments to government, payments to households, unemployment benefits, employer payroll loans, cash subsides to airlines and countless other industries, and a host of grab-bag earmarks which had nothing to do with covid. This new money injected itself straight into the veins of the daily economy.

Second, supply chains remain degraded because politicians around the world didn’t think through their lockdown policies. The deeply interconnected global economy does not have an ON/OFF switch. Idle resources and idle workers don’t simply spring to life and produce goods and services on command. But our policy makers have no conception of a structure of production, its temporal elements, or the ravages of malinvestment created by their political decision to shutter businesses.

Third, covid allowed the Fed to justify yet another spasm of “extraordinary” monetary policies beginning in March 2020. This gave central bankers an easy out, in a sense, because real trouble was already on the horizon back in September 2019. The repo market, which commercial banks use for short-term (overnight) financing of their operations, suddenly seized up and sent rates spiking. These paroxysms embarrassingly forced the Fed to inject billions of dollars into its “standing” (i.e., permanent) repurchase facility and to consider yet another round of QE (asset buying) even after it had promised to shrink its balance sheet, still bloated with the detritus of the 2007 crisis.

When one considers the amount to which the Fed and governments at all levels have intervened in the economy over the last two years, the true question to ask is not why we have inflation, but why prices have not risen faster. Furthermore, the Fed has been on an unsustainable buying spree that has propped up the mortgage markets, repos, and long-term government bonds since September 2008 (as shown in the second and third graphs) (Operation Twist).

The economy just cannot absorb the trillions of dollars that the Fed has pumped into it. Furthermore, contrary to what the so-called ruling classes would have us believe, stuffing dollars into the pockets of people who have lost their jobs as a result of misguided covid lockdowns and production restrictions, as well as paying others not to work, is not a perfect substitute for producing real goods and services.

Even if Putin called off the invasion of Ukraine and agreed to sell Russia's oil and natural gas at deep discounts, consumer price hikes in the United States would stay mostly unchanged. While the invasion has undoubtedly influenced current gasoline and oil prices (as well as European natural gas prices), it has had little impact on the country's total inflation rate.

Biden and the ruling classes will never acknowledge to such a situation, and we can be sure that Krugman, the New York Times, the Washington Post, and other mainstream media outlets will blame Putin, climate change, corporate profits, and whatever else comes up. Meanwhile, the Fed will continue its unsustainable policies, while everyone else will see their personal assets eroded by inflation.
=====