Food, energy, and export prices are all included in GDP inflation

It's Not Just the United States: Global Economic Instability

Should the Federal Reserve devalue the dollar in order to implement negative interest rates?

By highlighting erroneous inflation figures, central banks will not be able to determine the best policies.

A Wall Street Journal editorial, “Rumors of Stagflation,” describes accelerating inflation in the first quarter GDP report: “The GDP decline … coincided with an accelerating rise in prices. The GDP price index rose at an 8% annual rate on top of 7.1% in the previous quarter. The Fed’s preferred inflation measure, personal consumption expenditures, rose 7%, when its target is 2%.”

The "core" personal consumption index, which eliminates some but not all food and energy prices, is the Fed's preferred inflation gauge. In the first quarter, the Core PCE increased by 5.2 percent, closely matching the 5% increase in the fourth quarter of last year and falling short of the 6.1 percent increase in the second quarter. In the metric that the Fed purports to be monitoring, there is no such thing as "accelerating inflation."

Consumer prices, including import prices, are measured by the PCE index. Import prices are not included in the GDP index because they are not part of our domestic product. Most crucially, the GDP index incorporates export prices for products and services produced in the United States (paid by foreign firms, consumers, and governments, not Americans). 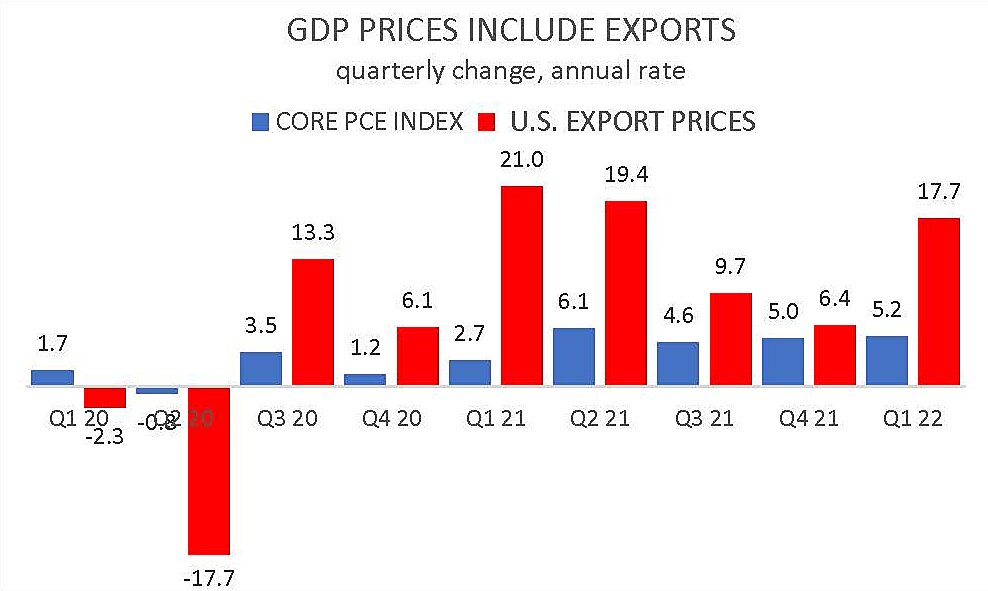 Russia's war in Ukraine has definitely wreaked havoc on global oil and gas supplies, as well as grain and oilseed prices. The dollar has gained 8.3% versus the Euro, 8.6% against the pound, and 13.7 percent against the yen on talk of "substantial" Fed funds rate hikes with "far higher rates... looming." The Economist's April 19 commodity index is 22 percent higher than a year ago in Euros, compared to 9.4 percent in dollars, making the war rise in commodity prices considerably more difficult for other countries.

It would be foolish for the US or European central banks to base monetary policy on any non-core price index, such as the US GDP index, that does not even attempt to exclude energy and food prices. However, that is only part of the issue. Because it includes the skyrocketing volume and prices of US exports of liquified natural gas (LNF), coal, cereals, and soybeans, the GDP index dramatically intensifies the price distortion caused by the Russian war. The volume of LNG exports, for example, has increased by 25% this year, but the price has skyrocketed. This, together with exports of scarce food, metals, and other items from the United States, raises the GDP price index.

The yearly rise in the GDP deflator would have been less than 5% without the impact of war and sanctions on export prices and the headline PCE.

By highlighting erroneous inflation figures, central banks will not be able to determine the best policies.