Defending Communist Totalitarianism: How the Left Justifies it

Much More Than Covid in China's Slowdown

Metaverse is similar to Communist Propaganda, according to a CEO born in Soviet

Many young Westerners aren't horrified by Soviet communism because of a combination of left-leaning academics at educational institutions and the entertainment industry, two of the most influential influences in shaping young people's minds today.

Stalin killed millions, and Stanford University issued a paper with the punchline, "When it comes to use of the phrase "genocide," public opinion has been kinder to Stalin than Hitler" back in September of 2010.

More than a decade later, British historian Giles Udy was interviewed and asked by the hosts: "Why is it that the Nazis' swastika is deservedly seen as a horrendous symbol of evil and of oppression, but the hammer and sickle, people just shrug their shoulders?", "Why were we never taught this?", referring to communist crimes.

According to numerous polls over the years and in various Western countries—such as the United States and the United Kingdom as well as Australia and Germany—young people support socialism and believe that "communism could have worked if it had been better executed" in the UK in 2018, a startling number. 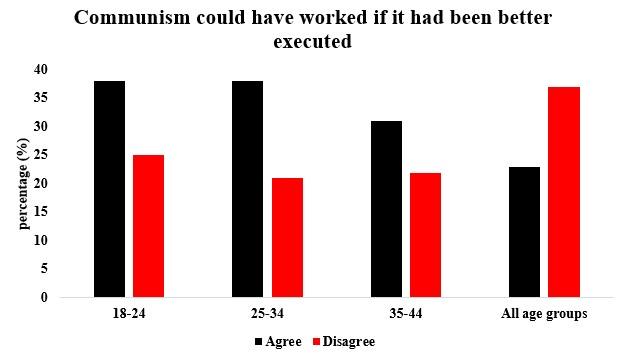 The romantic view of international socialism (communism) that many young Westerners continue to hold, often expressed in apologies like the well-known "that was not real communism," aims to whitewash Marx's ideology, which has been responsible for the deaths of over 100 million people in the last century.

What is the reason for this? A simple, though not totally inaccurate, explanation is that the West and the USSR were allies in the fight against the Nazis, which is why the two totalitarian governments of the twentieth century are perceived so differently. While it's true that Westerners were largely blamed for the public's misperception of national socialist evil, what about Japan's?

In the words of Atomic Heritage Foundation's Avani Sihra: "German crimes such as human medical testing done in concentration camps tend to attract more attention than Japan's crimes against humanity [...] The Japanese, on the other hand, participated in human medical experiments in a secret project known as Unit 731."

The Emperor Hirohito has been called the face of evil countless times. The chances are slim. In addition, ask yourself if you've ever seen an ad for a film, television show, or book depicting Imperial Japan's views and practices in the twentieth century. Consider how long it has been since you saw a movie about Nazis or read about them in the news. Take as much time as you need. There is a ton of evidence in my report to support this allegation.

The Nüremberg and Tokyo trials, in which high-ranking Nazi and Imperial Japanese officials were convicted under Article 6 of the Charter of the International Military Tribunal for crimes against humanity, are among the finest examples of this.

It's also worth noting that trials like these have never taken place for crimes committed under communist regimes. New Culture Forum's 2017 poll shows that Westerners do not consider the events that transpired under the USSR to be crimes against humanity. Despite the fact that Hitler's and Stalin's regimes shared many parallels, this is the case.

Although the term "communism" or "Stalin" may be unfamiliar to Western audiences, the crimes committed by communist regimes are not viewed with the same level of gravity as those committed by the Nazis. There is a wealth of knowledge available about communism and its atrocities, as I demonstrated in my essay.

Socialism and communism are viewed in a negative light by the public because of two significant forces: The first is academia. "There is no intelligentsia left that has not in some manner been "Left" today," wrote English writer George Orwell in 1941.

A 2017 poll suggests that "the academy's Left-liberal bias may have increased since the 1960s," which is in line with Orwell's view. In the United States, there has been a comparable shift.

Many of the faculty members at Western universities, especially at the upper levels, view themselves as political activists for socialist ideals, and this can be seen in the imposition of political correctness (which is "communist propaganda" according to English cultural critic, Theodore Dalrymple) and critical race theory, a primary vector of today's version of Marxist ideology: Identity Marxism, or Wokerism.

The public's view of communist and socialist movements is also distorted outside of academic circles. "The ideology that supported Stalin's programs of mass extermination died in 1989 with the fall of communism, but the bigotry that drove Hitler continues on in a variety of forms that continue to haunt the world today," the author said in a piece for The Guardian.

The communist system did not come to an end in 1989, as often believed (or to be more accurate, in 1991, when the USSR did finally fall). The Victims of Communism Memorial Foundation, a Washington DC-based study center, writes on its homepage:

"The Berlin Wall came down in 1989, but communism remained in place. " As of this year, one-fifth of the world's population is still under the control of single-party communist governments in countries such as China, Cuba, Laos, North Korea, and Vietnam."

The prevalent fallacies stated above are also made feasible by the fact that Westerners' minds are not just shaped by the academic environment. Artists and entertainers, too, tend to be "left-leaning."

According to Mark Dice's 2020 book Hollywood Propaganda: How TV, Movies, and Music Shape Our Culture, the American film industry has done a lot to propagate Left-wing ideologies. According to the Hollywood Reporter, for example, "Leah Cameron takes pride in The Communist's Daughter having an unashamed socialist streak, even though her Canadian uber-left web comedy is a world away from Russian bread lines and iron-fisted Stalinism," It was Cameron's goal for the show to "create a show where we can still see the positive in the ideas of socialism and Marxism, and they're worth fighting for."

It's worth noting that the Institute of Economic Affairs, in its study titled "Left turn?," published in 2021, compiled an extensive collection of articles from Teen Vogue, which is a teen magazine whose 2017 editorial declared that "our readers consider themselves activists."

Many young Westerners aren't horrified by Soviet communism because of a combination of left-leaning academics at educational institutions and the entertainment industry, two of the most influential influences in shaping young people's minds today.

More from: USAGAG
1
Elon Musk said that Bill Gates has a bet ...
2
At the National Rifle Association, Donald Trump said, 'If ...
3
It's a Good Idea to Create NFT Art Museums
4
U.S. Creating Insect 'Bio-Weapons' to Cause Famines, According to ...
Filed under Communist ,  Totalitarianism