Following his participation in the United Nations' COP26 climate meeting in Glasgow, Scotland, actor and environmental activist Leonardo DiCaprio has joined a slew of other Hollywood luminaries to convey a message to the world about averting climate 'armageddon.'

AFP reports the dark satire “Don’t Look Up” stars DiCaprio and Jennifer Lawrence as astronomers whose warnings about imminent catastrophe fall on deaf ears in a divided United States led by an incompetent president — played by Meryl Streep.

DiCaprio, a onetime U.N. Messenger of Peace, applauded Adam McKay’s script for solving the “next to impossible” problem of making a suspenseful film about a crisis that “evolves over a century.”

“How do we as a species, as a society, as a culture, politically, deal with imminent armageddon?” DiCaprio asked a Los Angeles preview screening audience on Thursday, seeking to build on his own environmental credentials.

“He had cracked the code, so to speak, on how to bring all the insanity that we as the human race are responding to this crisis, in a two-hour format,” he said.

DiCaprio said he hoped the project would “start to create different conversations, and more people talking about it will push the private sector and the powers that be to make massive change.” 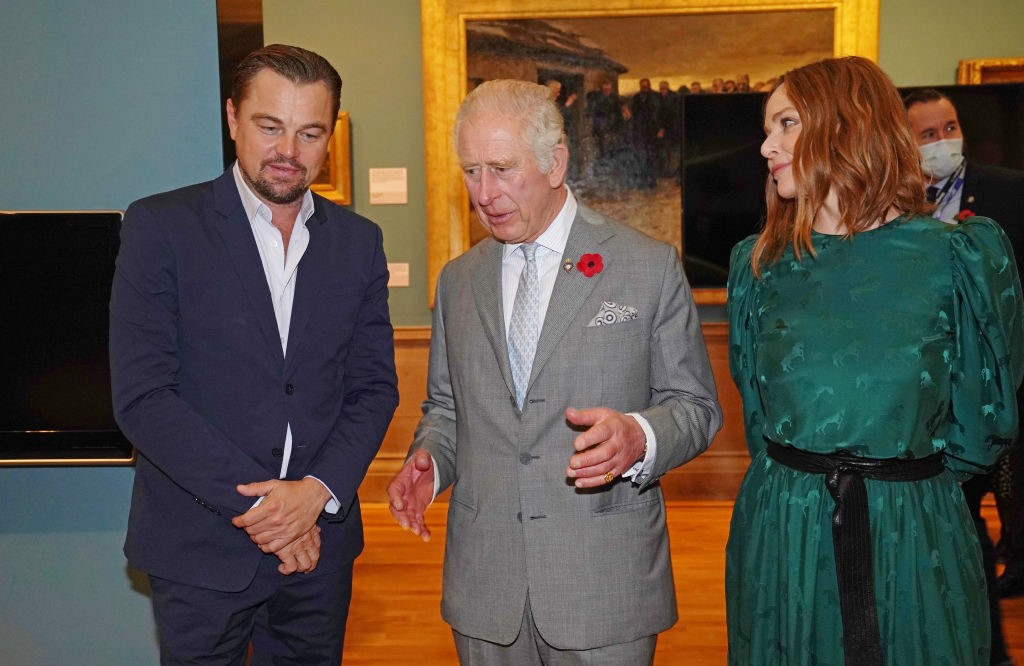 Prince Charles speaks with Leonardo DiCaprio at a fashion installation by designer Stella McCartney, at the Kelvingrove Art Gallery and Museum, during the Cop26 summit  in Glasgow, Scotland. (Owen Humphreys-WPA Pool/Getty Images)

But he admitted he had “not much” optimism about humanity’s ability to resolve the climate crisis or if anyone was really listening to the messages being sent out by climate delegates.

“Especially after coming back from Glasgow and seeing these commitments that can be changed by the next wacky administration that might come in and pull out,” he warned.

This is not the first time DiCaprio has seen fit to wade into the climate debate with a message of impending doom for civilization.

For instance, just days after he told Charlie Rose in an interview in January 2016 climate change is “the biggest problem that mankind has ever had to face,” the Academy Award-winner flew on a private jet to the World Economic Forum’s (WEF) annual conference in Davos, Switzerland to denounce the “greed” of the energy industry.

In May of that year, the actor flew an estimated 8,000 miles from the Cannes Film Festival in France to New York, where he received the Fishermen’s Ball’s “Big Fish” award for his commitment to clean water and back to France to give a speech at amfAR’s Cinema Against AIDS gala.

He has also warned “climate deniers” should not be allowed to hold public office, in a thinly-veiled attack on Donald Trump that was staged in co-ordination with the Obama administration.

More from: USAGAG
1
After Hunter's laptop, Joe Biden's daughter reportedly keeps a ...
2
Why the billions in fraud were caused by the ...
3
Roe always looked like a house of cards
4
After ‘life-altering surgery’ Ozzy Osbourne releases a creepy new ...
Filed under Leonardo DiCaprio ,  environmental ,  Climate Change