Yes, the United States of America is divided, and an essay arguing otherwise exemplifies why

Angry outbursts and demonstrations over what to teach at school board hearings demonstrate how profoundly Americans are divided.

The narrative continues: Angry outbursts and demonstrations at school board meetings around the country are not a product of widespread displeasure, but a right‐​wing fringe. It is a narrative that left‐​leaning elites in the media and academia seem to embrace, perhaps because they can blame their politically least favorite people for trouble. But it's also a story that's very certain to exacerbate rifts, confirming what makes many on the right so angry: elites, sometimes sponsored by taxpayers, abandoning fairness while portraying themselves as paragons of objective truth seeking.

Writing a few days ago in progressive Slate about a survey he conducted with the ostensibly politically neutral American Historical Association and taxpayer‐​funded ($167.5 million) National Endowment for the Humanities, Fairleigh Dickinson University history professor Pete Burkholder asserted that Americans are not as divided on the teaching of history as recent school board fireworks might suggest. He based this primarily on roughly three‐​quarters of respondents agreeing that it is “acceptable to teach history about harm done to others even if it causes discomfort.”

What was Burkholder's method of reporting this discovery? When combined with the findings of other polls, it appears that the majority of people strongly support left-wing issues ranging from gun background checks to more taxes on the wealthy, he wrote, “The loudmouths interrupting school board meetings and staging vaccine ‘freedom’ protests don’t represent popular, to say nothing of valid, viewpoints on science and history.”

Take that, angry people! You are fringe jerks who not only should not get your way, your views are simply invalid.

But are people unhappy with history curricula and other hot‐​button schooling issues really fringe?

For starters, a quarter of people holding a particular view is not a tiny group. It is one out of every four people, or significantly more than say they watch baseball “a great deal” or a “good amount.” In other words, baseball fans. Would we consider baseball fans fringe?

Worse than the interpretation of the numbers on this particular question, however, is that Burkholder’s own poll indicates much deeper division than what he elevates in his essay marginalizing upset citizens. On the foundational question of how history should present the basic nature of the United States – bad because of its sins, or good because of its core principles and perceived progress toward justice – the public is split almost 50/50.

When asked whether history should “celebrate” or “question the nation’s past,” the overall split was 47 percent for questioning, 53 percent for celebrating. When it came to partisanship, 70 percent of Democrats favored questioning, while 84 percent of Republicans favored celebrating. Independents were virtually evenly split, with 51 percent rejoicing and 49 percent doubting. 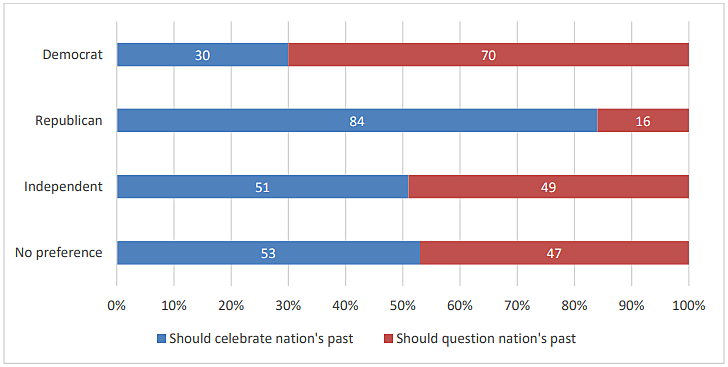 The nation is almost evenly divided between the 1619 Project and 1776 Commission, though with a little lean toward the right‐​wing side.

Ironically, Burkholder’s survey may not just reveal deep splits, but also illustrate the wages of left‐​wing elites playing loose with evidence to own the cons: people on the right not trusting “experts.”

The fringe‐​right‐​wingers narrative is too simple, and politically convenient, an explanation for what is driving anger about education. And the more elites on the left ignore confounding evidence in order to push that narrative, the more understandable anger on the right becomes.

More from: Neal McCluskey
1
Yes, the United States of America is divided, and ...
Filed under divided ,  Humanities