Being listed on an exchange is usually regarded as a watershed moment for those involved with the underlying project and those who are interested in it. In most cases, the value of assets rises after they are listed.

In the traditional markets, the masses typically subscribe to IPOs in order to capitalize on listing day gains. They sell their stock a few hours after it is listed and enjoy their quick-minted short-term gains. Despite the fact that other factors such as risk tolerance and investment objectives play a role, the aforementioned'sell post listing' behavior has almost become a tradition.

Just as every coin has two sides, there are a slew of drawbacks to investing with the goal of profiting from stock market gains. For starters, there is no guarantee that the asset's price will rise on the day of listing. Even if the price rises, it can be difficult to exit at the right time.

Furthermore, such investors are frequently caught in a vicious cycle of churning investments, with the added burden of swapping funds from one company's IPO to another.

The same behavior has, for the most part, been replicated by members of the crypto community. In fact, people in the space frequently get excited during the listing period and take full advantage of it. The SHIB Army is clearly one such community that has jumped on the listing bandwagon.

As a result, the token has a good name, a strong army behind it, and, most importantly, it is well-known. From the perspective of a novice investor, all essential boxes are checked. However, such participants are unaware that SHIB is merely a meme-coin and not a "cool" investment option. In fact, their actions support the aforementioned claim.

SHIB's volumes have skyrocketed following the recent Coinbase and Binance.US listing announcements. Consider this: prior to the Coinbase listing, the 24-hour SHIB volume was primarily in the $200 million range. However, following the aforementioned'momentous' event, the number nearly doubled.

Similarly, during the Binance.US listing period, this metric increased to as high as 1.6 billion, according to data from Santiment's chart attached below. Isn't it surprising?

In the short run, the expected ripple effect caused SHIB's price to skyrocket.

People in the community are very interested in getting Shiba Inu listed on Robinhood. A petition on change.org has been launched to support the cause, and it is quickly becoming one of the most popular. Over 259k people had already signed the petition at the time of writing.

Given the current petition's massive support, the SHIB community appears to be on its way up to turning Robinhood to list it. If the listing is successful, it will become yet another significant event in the history of SHIB. In effect, market participants can expect the asset's price to rise even further in the coming days.

Indeed, at the time of writing, whales appeared to be preparing for the release, and SHIB was trading in the green. 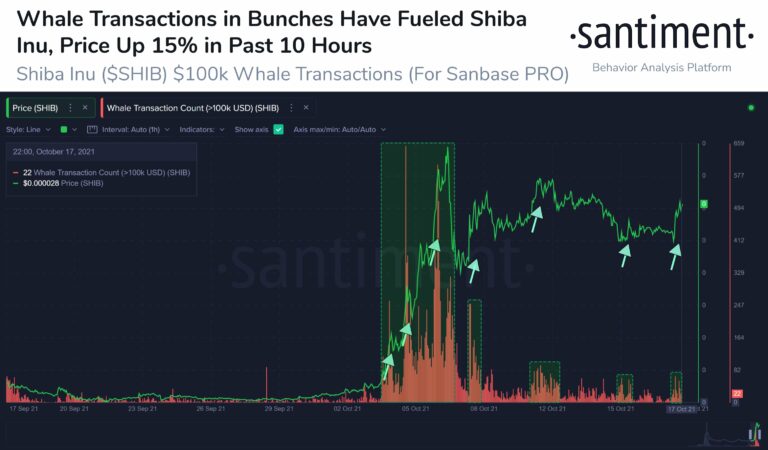 “Dogecoin has been a huge success for Robinhood, and its investors. We have all enjoyed the ride. Shiba Inu is a similar meme coin with genuine potential… Let’s encourage Robinhood to be the first traditional brokerage to get on this train!”

Robinhood, on the other hand, already bears the meme-stock label, and as previously stated, a sizable portion of its revenue is derived from meme-coins. As a result, it's only a matter of time before SHIB is listed on Robinhood's trading platform. After all, if one meme doesn't help another, who will?

More from: Elon Mark
1
The Ethereum A-Z, the NFT market, and the Tungsten ...
2
Weekly Technical Analysis for Bitcoin and Ethereum – November ...
3
Why Is Bitcoin Called the 'Honey Badger of Money'
4
Animoca's Blockchain Game Unit Raises $93 Million from SoftBank ...
Filed under shiba ,  shiba coin