How the Stoics can help us get through lockdown

How to relax: Learn about the lost art of rest

Mars had up to 20 separate ice ages, discover scientists

Study confirms the existence of a special kind of groupthink in large groups.

People make sense of the world by organizing things into categories and naming them. "These are circles." "That's a tree." "Those are rocks." It's one way we tame our world. There's a weird correspondence between different cultures, though — even though we come from different places and very different circumstances, cultures everywhere develop largely the same categorizations.

"But this raises a big scientific puzzle," says Damon Centola of the University of Pennsylvania. "If people are so different, why do anthropologists find the same categories, for instance for shapes, colors, and emotions, arising independently in many different cultures? Where do these categories come from and why is there so much similarity across independent populations?"

Centola is the senior investigator of a new study in the journal Nature Communications from the Network Dynamics Group (NDG) at the Annenberg School for Communication that explores how such categorization happens.

Some have theorized that these categories are innate—pre-wired in our brains—but the study says "nope." Its authors hypothesize that it has more to do with the dynamics of large groups, or networks.

Some of the shapes used in the experiment

The researchers tested their theory with 1,480 people playing an online "Grouping Game" via Amazon's Mechanical Turk platform. The individuals were paired with another participant or made a member of a group of 6, 8, 24, or 50 people. Each pair and group were tasked with categorizing the symbols shown above, and they could see each other's answers.

Says Centola, "Even though we predicted it, I was nevertheless stunned to see it really happen. This result challenges many long-held ideas about culture and how it forms."

Nor was this unanimity a matter of having teamed-up like-minded individuals. "If I assign an individual to a small group," says lead author Douglas Guilbeault, "they are much more likely to arrive at a category system that is very idiosyncratic and specific to them. But if I assign that same individual to a large group, I can predict the category system that they will end up creating, regardless of whatever unique viewpoint that person happens to bring to the table." 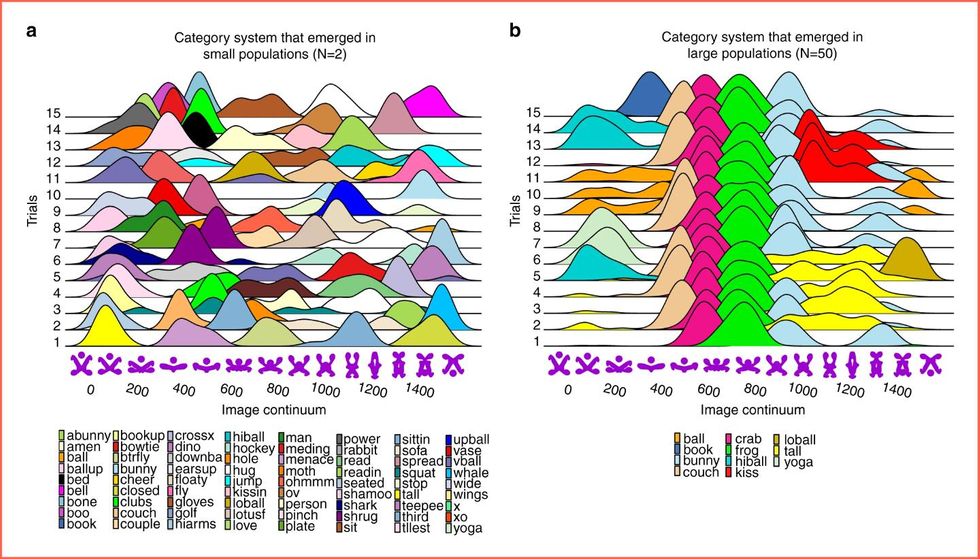 The striking results of the experiment correspond to a previous study done by NDG that investigated tipping points for people's behavior in networks.

That study concluded that after an idea enters a discussion among a large network of people, it can gain irresistible traction by popping up again and again in enough individuals' conversations. In networks of 50 people or more, such ideas eventually reach critical mass and become a prevailing opinion.

The same phenomenon does not happen often enough within a smaller network, where fewer interactions offer an idea less of an opportunity to take hold.

The study's finding raises an interesting practical possibility: Would categorization-related decisions made by large groups be less likely to fall prey to members' individual biases?

With this question in mind, the researchers are currently looking into content moderation on Facebook and Twitter. They're investigating whether the platforms would be wiser when categorizing content as free speech or hate speech if large groups were making these decisions instead of lone individuals working at these companies.

Similarly, they're also exploring the possibility that larger networks of doctors and healthcare professionals might be better at making diagnoses that would avoid biases such as racism or sexism that could cloud the judgment of individual practitioners.

"Many of the worst social problems reappear in every culture," notes Centola, "which leads some to believe these problems are intrinsic to the human condition. Our research shows that these problems are intrinsic to the social experiences humans have, not necessarily to humans themselves. If we can alter that social experience, we can change the way people organize things, and address some of the world's greatest problems."