Can hospitals prevent gun violence? This ‘universal screening’ study will find out.

Gun violence is a public health crisis that is notoriously difficult to study because of politics. Finally, a new research initiative has the green light to collect life-saving data.


Doctors often ask patients about the health risks in their daily lives, such as sugar intake or tobacco use. After all, doctors can use that information to design better treatments. And on a larger scale, health professionals can use anonymized medical data on substances like sugar and tobacco to learn more about diseases like diabetes and lung cancer.

So, what if doctors began asking similar questions about guns, which are involved in more than 100 deaths in the U.S. every day? Could patients and researchers benefit in similar ways?

A new study from Northwell Health, the largest health system in New York State, aims to find out. In the "We Ask Everyone. Firearm Safety is a Health Issue" study, which began in September, doctors will ask every patient who visits an emergency department at three Northwell Health facilities about their access and exposure to firearms, with questions like:

The answers will become part of a large, anonymized data pool that will help researchers better understand the underlying factors behind gun violence. Northwell Health will also offer interventions to at-risk patients.

"This will be the first research study to universally screen all patients who come into the emergency department for firearm access, and gun violence risk, and then intervene as needed, with gun safety counseling, gun locks, community resources, and medical referrals," said Dr. Chethan Sathya, director of Northwell's Center for Gun Violence Prevention. "If you look at any other public health issue, it starts with this universal type of approach."

In the study, all conversations about firearm access and exposure will be confidential. The goal is to encourage firearm safety, educate at-risk patients on violence-prevention resources, and normalize doctor-patient conversations about guns—not stigmatize gun ownership or infringe upon individual rights.

The collected data will help health professionals develop better models for predicting who's most at risk of gun violence. Northwell Health isn't quite sure what that data will reveal. That's why universal screening is the first step.

"The bottom line is, we don't know the answers yet," said Dr. Sathya. "So, how can we target screening if we don't even know the basic elements of a public health approach?"

When we reframe [gun violence] as a public health issue, then we're able to use the same strategies that we've used to decrease car-crash deaths, decrease infections and deaths from HIV, and reduce injuries and deaths from a host of other problems.

One major goal of the study is to reframe how health professionals and patients discuss gun violence—an issue that's often couched only in political terms.

"Our big push is to consider gun violence as a public health issue," said Dr. Sathya. "For decades, we've tried to get doctors to try to ask [patients about firearms access and exposure]. They won't, because it's not considered part of the usual care."

Dr. Megan Ranney, an emergency physician and Chief Research Officer for the American Foundation for Firearm Injury Reduction in Medicine, said talking about guns from a different angle can lead to meaningful reductions in injuries and deaths.

"When we reframe [gun violence] as a public health issue, then we're able to use the same strategies that we've used to decrease car-crash deaths, decrease infections and deaths from HIV, and reduce injuries and deaths from a host of other problems," said Dr. Ranney. "We don't waste our time arguing while death rates go up. Instead, we actually do something that we as individual Americans can take on." 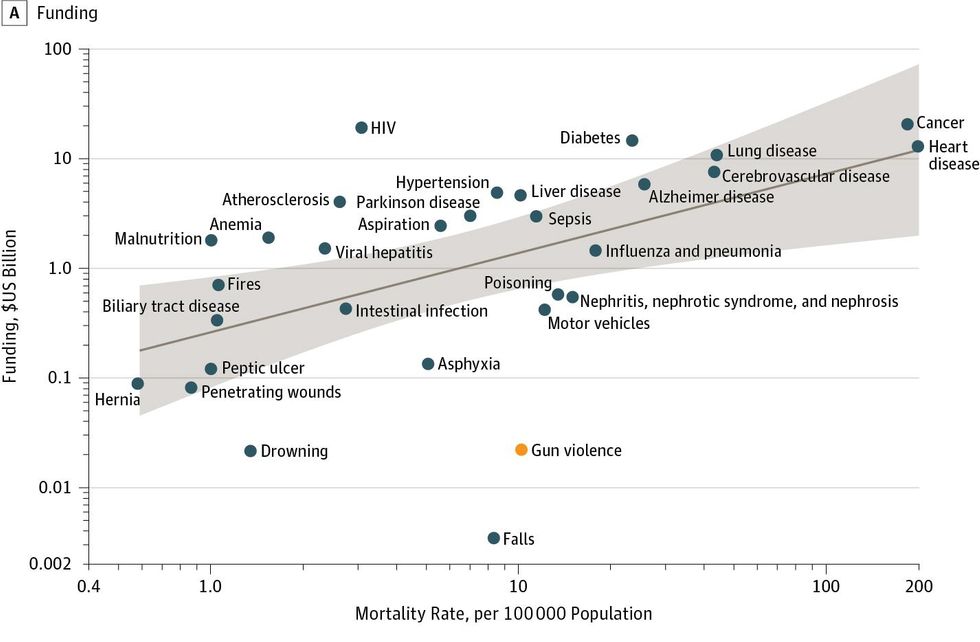 Mortality rate vs funding for 30 leading causes of death in the United States.

The funding freeze stems largely from the Dickey Amendment, which Congress passed in 1996 to ensure that "none of the funds made available for injury prevention and control at the Centers for Disease Control and Prevention (CDC) may be used to advocate or promote gun control."

"It comes from a perception that research was done with an agenda of legislative change, which it isn't," said Dr. Ranney. "Research is done in order to advance health, and it ideally happens from a perspective that is independent of personal belief."

Focused on public health instead of politics, the new study aims to broaden the scope of firearms research.

"The studies that have been conducted with respect to firearms have been so limited," said Dr. Sathya, noting as an example how doctors might ask about firearms only if a patient is suicidal. "Because there has been no funding, we're starting from scratch in many ways." 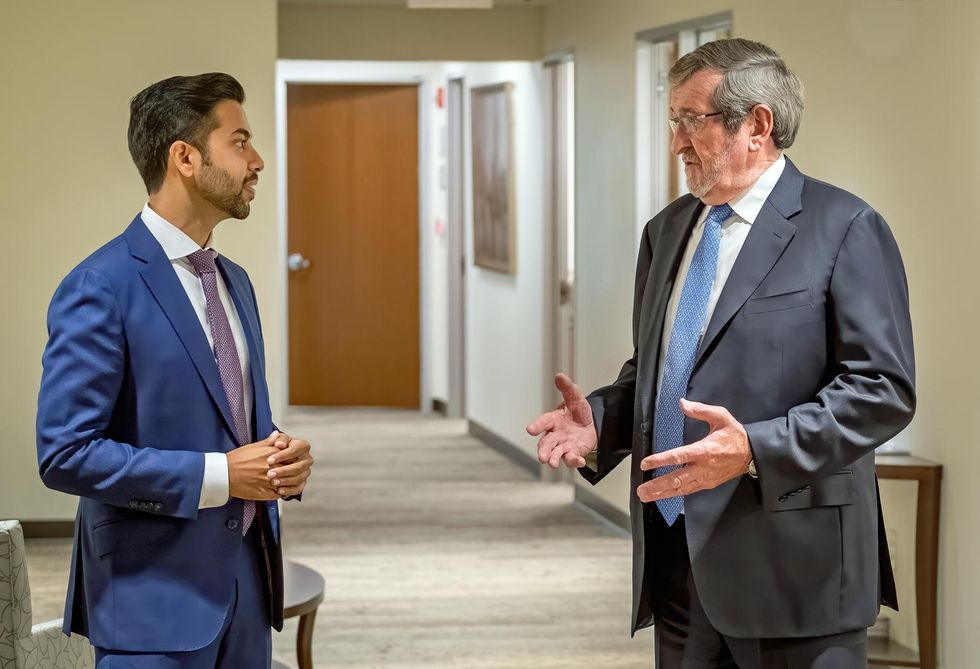 Dr. Sathya and Mr. Dowling are spearheading Northwell's gun-violence prevention efforts, including the "We Ask Everyone. Firearm Safety is a Health Issue" research study.

One reason health professionals are uniquely suited to play a lead role in preventing gun violence is that they're often the first point of institutional contact for at-risk people. By normalizing doctor-patient conversations about guns, health professionals would be able to intervene early.

For example, they could connect at-risk patients with violence-prevention resources like the New York City Mayor's Office to Prevent Gun Violence, which curbs gun violence through strategies like "violence interrupters," liaisons between communities and public officials, and funding for community-based activities to make neighborhoods safer.

Northwell Health president and CEO Michael Dowling also noted that about 40,000 people die from guns every year in the U.S., while thousands more are injured. For the health professionals that treat the victims, these statistics aren't abstract.

"Gun violence is a public health problem, period," said Dowling. "As guardians of public health, it is our responsibility to address this scourge on our communities, and the clinicians who are knee-deep in the carnage."

In 2021, Northwell Health plans to begin sharing and discussing the results of its multi-year study with other health systems as part of its Gun Violence Prevention Learning Collaborative.

"We hope that it serves as a blueprint for other hospitals and health systems as to how to institute this universal approach so that doctors can start asking the question more and more, and so it isn't an awkward topic to talk about," said Dr. Sathya.