Using a laboratory model, scientists get a nice Jovian surprise.

The Earth has a magnetosphere. So does Jupiter. But Jupiter's has a million times the volume of ours. As a result, Jupiter slams its moon, Europa, with a steady blast of high-energy radiation. This can't help but have an effect on the satellite, and new research from NASA's Jet Propulsion Laboratory has an idea what that effect is: Europa glows, in shades of green, blue, and white. The moon's night side even glows in the dark. The discovery was made by exploring the behavior of a Europa laboratory model bombarded with radiation.

The research is published in the journal Nature Astronomy. 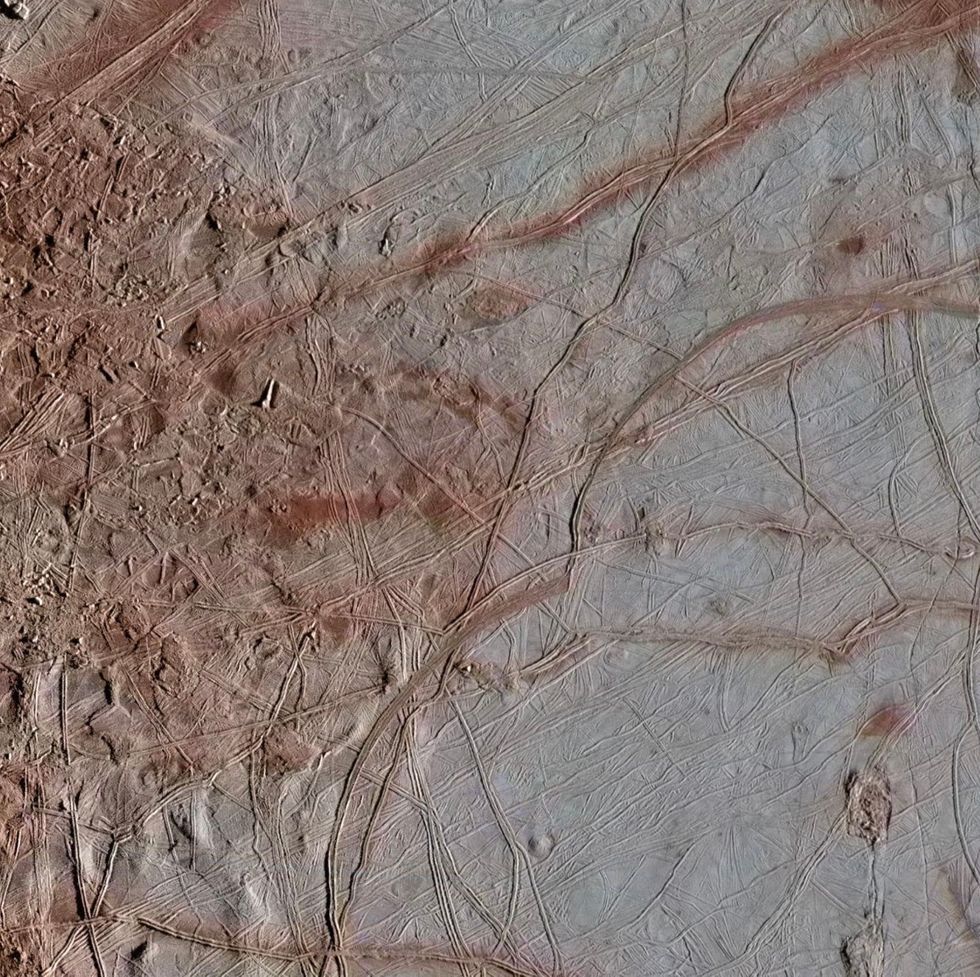 Europa is believed to have an ocean of water or slush beneath its chaotically-featured water-ice surface. According to NASA, it's suspected that the moon's ice layer is 10 to 15 miles thick and floats atop an ocean 40 to 100 miles deep. Europa is just a quarter the size of Earth, but its vastness and depth may mean that it has twice as much water as all of our oceans combined.

With water considered to be a prerequisite for life, scientists' interest in Europa is obvious. NASA is sending the radiation-resistant Europa Clipper there to have a look. The spacecraft will conduct 45 flybys at different distances, ranging from 1,675 miles to 16 miles above the ice. The Europa Clipper will carry cameras, spectrometers, ice-penetrating radar, magnetometer, thermal instruments, a device for measuring gravity, and more.

NASA has previously detected what may be vapor plumes extending outward from Europa. If the Europa Clipper confirms their existence, it may be possible in the future to sample the moon's escaping vapors without needing to land or drill through the ice. 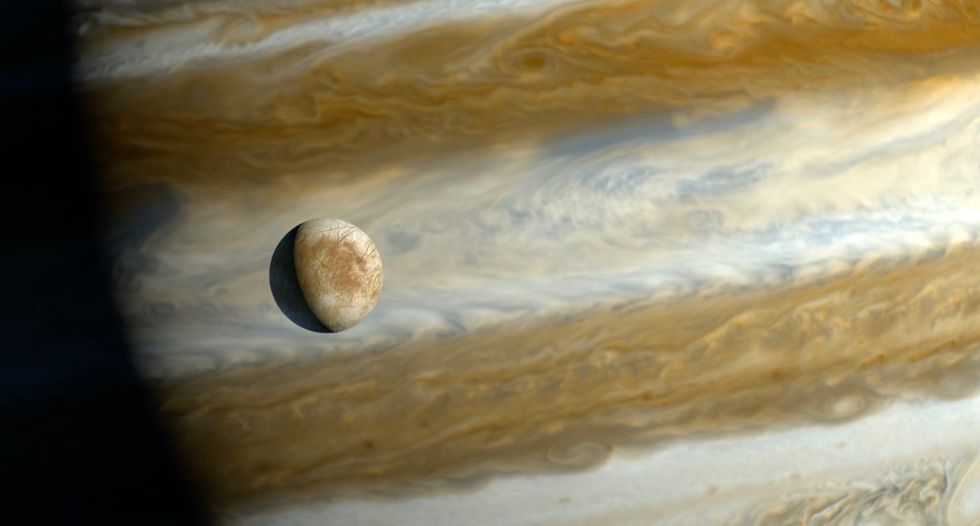 Artist's impression of Europa against a backdrop of Jupiter

The researchers modeled Europa's response to Jupiter's radiation using a special instrument they constructed called the Ice Chamber for Europa's High-Energy Electron and Radiation Environment Testing (ICE-HEART). To blast it with radiation, they took it to the Medical Industrial Radiation Facility at the National Institute of Standards and Technology in Gaithersburg, Maryland, a high-energy electron beam facility.

Expecting that Europa's oceans would contain a mix of water and salts similar to those on Earth, they were investigating the response of various materials to radiation. They began with magnesium sulfate and sodium chloride — essentially Epsom salt and table salt — both believed to be in Europa's ice.

They weren't surprised to see some glowing caused by energetic electrons getting through the moon's ice and energizing molecules beneath it. The glow is generated when the molecules relax after exposure.

However, the variety of colored glows emitted by radiated compounds was a surprise, according to co-author Bryana Henderson. "We never imagined that we would see what we ended up seeing," Henderson said. "When we tried new ice compositions, the glow looked different. And we all just stared at it for a while and then said, 'This is new, right? This is definitely a different glow?' So we pointed a spectrometer at it, and each type of ice had a different spectrum." (Spectrometers divide light into wavelengths that can signify specific compounds.)

"Seeing the sodium chloride brine with a significantly lower level of glow was the 'aha' moment that changed the course of the research," said co-author Fred Bateman.

We can see our own moon because it reflects sunlight. Most spectrometer readings of Europa have thus far been derived from observations of its light-reflecting bright side.

"If Europa weren't under this radiation," said Gudipati, "it would look the way our moon looks to us — dark on the shadowed side. But because it's bombarded by the radiation from Jupiter, it glows in the dark."

This means that the moon's dark side also emits light in the form of its glow, so here come the spectrometers. Gudipati said of the research, "We were able to predict that this nightside ice glow could provide additional information on Europa's surface composition. How that composition varies could give us clues about whether Europa harbors conditions suitable for life."

He adds, "It's not often that you're in a lab and say, 'We might find this when we get there. Usually, it's the other way around — you go there and find something and try to explain it in the lab. But our prediction goes back to a simple observation, and that's what science is about."