Tom Brady’s Buccaneers debut did not go that well

Tom Brady has pulled off a few historic comebacks over two decades with the New England Patriots, but the six-time Super Bowl champion could not complete another in his ballyhooed debut with the Tampa Bay Buccaneers. Brady’s pick-six to former Giants cornerback Janoris Jenkins early in the second half put the Bucs in a 17-point …

Tom Brady has pulled off a few historic comebacks over two decades with the New England Patriots, but the six-time Super Bowl champion could not complete another in his ballyhooed debut with the Tampa Bay Buccaneers.

Brady’s pick-six to former Giants cornerback Janoris Jenkins early in the second half put the Bucs in a 17-point hole, and he couldn’t dig them all the way out of it in a 34-23 road loss to the New Orleans Saints.

“Certainly poor execution, it’s what it comes down to. Obviously they made more plays than we did,” said Brady, who signed a two-year, $50 million contract in March. “I made some just bad, terrible turnovers. It’s hard to win when you turn the ball over like that. I obviously have to do a lot better job… Just bad throws. Can’t do it.”

The 43-year-old Brady scored on a two-yard plunge on his first offensive drive of the season and finished with 239 passing yards with two touchdown passes and two interceptions in his first game for Tampa following 20 seasons alongside Bill Belichick in New England.

Brady was intercepted by safety Marcus Williams on a mistimed pass intended for hobbled star receiver Mike Evans, who was active despite being questionable due to a hamstring injury. Evans had only one reception in the game, a two-yard TD catch with 2:41 remaining.

Jenkins jumped a sideline route and gave the Saints a 24-7 lead with a 36-yard interception return before two minutes had elapsed in the third quarter, but Brady’s nine-yard touchdown toss to tight end O.J. Howard and a 38-yard Ryan Succop field goal drew the Bucs within seven by the end of the quarter.

But Brees (18-for-30, 160 yards) found Emmanuel Sanders for a five-yard scoring strike in the fourth and Wil Lutz added a late field goal for the Saints.

“I’ve lost plenty of games in my career. I know I don’t like it, but it happens,” Brady said. “We just gotta do a better job.”

Brady’s departure began a new era and a new-look offense for the Patriots, marking the first time a former NFL MVP quarterback has replaced another former league MVP under center.

Free-agent signing Cam Newton got New England off and running with 75 rushing yards and two touchdown runs — and Bill Belichick’s defense intercepted Ryan Fitzpatrick three times — in a 21-11 win over the Miami Dolphins in Foxborough, Mass.

“It was relatively picking up right where I remember the game to be,” said Newton, who missed much of last season with a foot injury. “I think it was just a feeling-through process with [offensive coordinator] Josh [McDaniels] and coach [Belichick] … to understand what they have.”

Newton, the 2015 MVP with the Carolina Panthers, also threw just four incomplete passes (15-for-19) with no interceptions, and Sony Michel added a late rushing TD for the Pats, who are seeking their 12th consecutive AFC East title.

“Cam’s been great for us. He’s a very unselfish player and a great teammate. He’s earned everybody’s respect, really, daily,” Belichick said. “That’s all you can ask for anyone and he’s continually done that. Puts himself last and puts the team first. He played well today and led the team.” 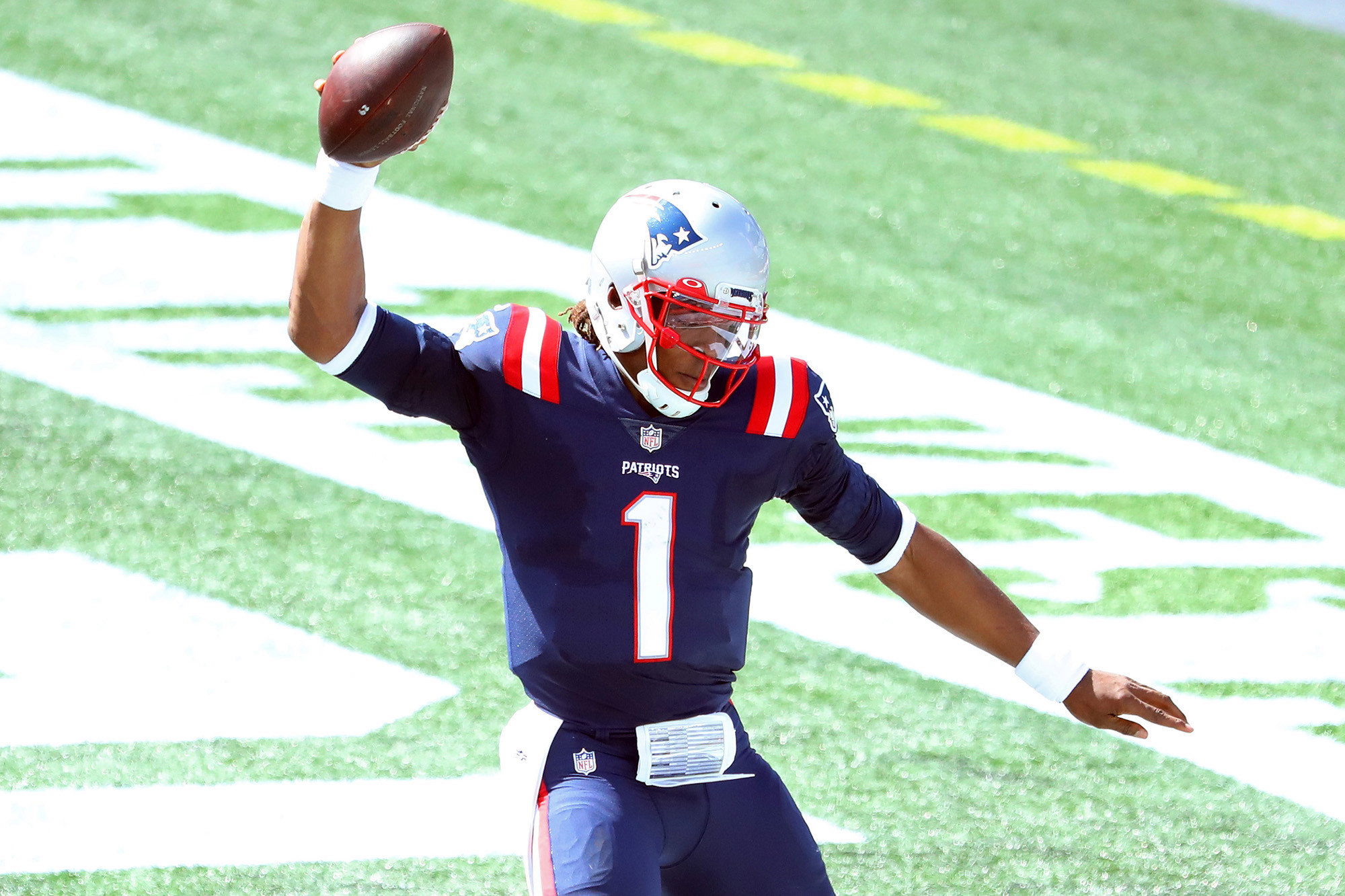 Patriots' post-Tom Brady era is off to perfect start

No Tom Brady, no problem. The New England Patriots began…

Brady and Newton weren’t the only star QBs in new locales, but Teddy Bridgewater and Philip Rivers lost their debuts in Carolina and Indianapolis, respectively.

Bridgewater, signed to a three-year deal worth $63 million to replace Newton with the Panthers, threw for 270 yards without an interception in a 34-30 home loss to the relocated Las Vegas Raiders.

Rivers, on a one-year deal worth $25 million with the Colts after 16 seasons with the San Diego/LA Chargers, was 36-for-46 for 369 yards but was intercepted twice in Indy’s 27-20 loss to the Jacksonville Jaguars.

The uncreatively renamed Washington Football Team pulled off the surprise win of Week 1 for new coach Ron Rivera, coming back from a 17-point second-quarter hole on the road to shock the Philadelphia Eagles, 27-17, in an NFC East matchup.

One year after blowing a 17-0 lead in the opener against Philly, Washington’s defense led the way in its comeback victory, intercepting Carson Wentz twice and sacking him eight times, including two by Ryan Kerrigan and 1.5 by No. 2-overall draft pick Chase Young.

With Rivera, who is undergoing cancer treatment, receiving an IV injection at halftime, Haskins even gave a rousing speech with Washington still trailing 17-7.

“Apparently Dwayne stepped up, and it was a pretty raucous one from what I heard,” Rivera said of Haskins’ speech.

“When playing quarterback, I’ve learned over the years that there’s opportunities in a game or in the locker room to fire guys up,” Haskins said. “I thought we were kind of in a lull. … [I was] trying to find a way to motivate the guys and we found a way to come back in the second half.” 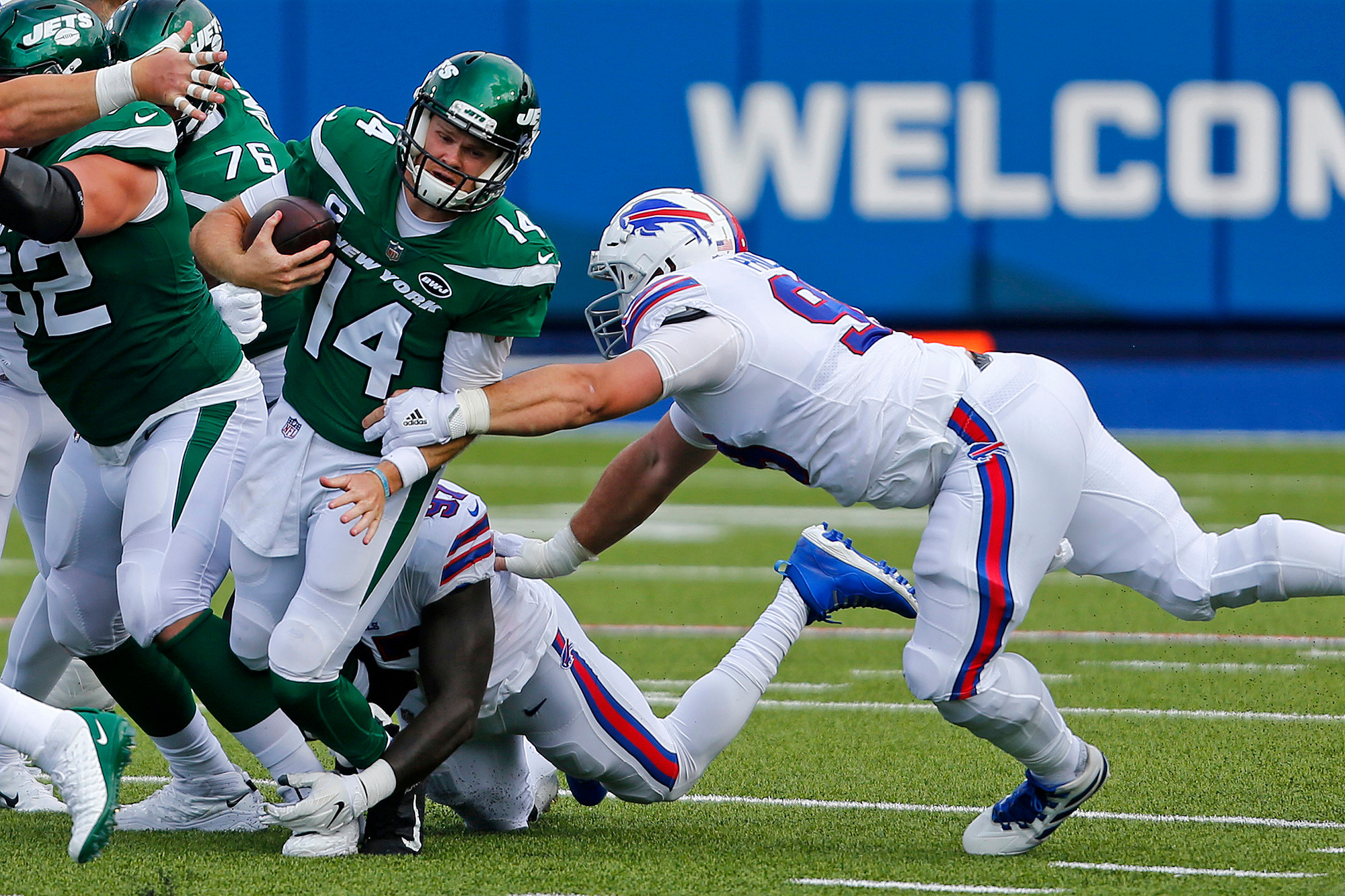 When Bills 27, Jets 17 was mercifully over, Sam Darnold…

Oh, the Detroit Lions. Rare for a game to qualify on both wagering sides, but here we are. Laying three points, the Lions were up 23-13 on the Bears with under three minutes to play when Mitch Trubisky’s short TD pass moved the game into a push scenario.

An ill-timed interception by Matthew Stafford while trying to run out the clock and another Trubisky scoring toss to Anthony Miller gave the Bears 27-23 with 1:58 to go. Detroit running back D’Andre Swift then dropped a sure go-ahead touchdown in the end zone with six seconds remaining.

No. 1-overall pick Joe Burrow also had the Cincinnati Bengals (three-point underdogs) lined up for a game-tying field goal in the closing seconds but kicker Randy Bullock missed a game-tying 31-yard field goal with three seconds remaining for a 16-13 loss to the Los Angeles Chargers.

Reigning MVP Lamar Jackson was back in 2019 form, with a 20-for-25 day for 275 yards and three touchdown passes and 45 more yards on the ground as the Baltimore Ravens obliterated the Cleveland Browns, 38-6. Former Giants wideout Odell Beckham Jr. caught just three passes for 22 yards on 10 targets from Baker Mayfield (21-for-39, 189 yards). … Russell Wilson also was close to perfect, completing 31 of 35 attempts for 322 yards and four TDs without a pick in the Seattle Seahawks’ 38-25 road win over the Atlanta Falcons. Wilson joined Steve Young as the only quarterbacks in league history with at least 30,000 passing yards and 4,000 rushing yards. … Three-time Pro Bowl tight end Greg Olsen caught one of Wilson’s TD throws in his first game for the Seahawks. … Washington linebacker Ryan Kerrigan’s two sacks moved him past Dexter Manley for the franchise record with 92. … Jacksonville quarterback Gardner Minshew threw just one incompletion (19-for-20) with three TD passes, including a go-ahead score to Keelan Cole with 5:56 remaining in the Jaguars’ 27-20 win over Indianapolis. … Running back Nyheim Hines scored two touchdowns in Mack’s absence for the Colts. … Raiders running back Josh Jacobs scored three touchdowns on the ground in relocated Las Vegas’ 34-30 win over Carolina. … Longtime Cowboys tight end Jason Witten had just one reception for two yards in his Raiders debut. … The Chargers went with Tyrod Taylor at quarterback over rookie Justin Herbert and he threw for 208 yards in their 16-13 win over Cincy. … Former Houston Texans wide receiver DeAndre Hopkins had 14 catches for 151 yards in his Arizona debut and quarterback Kyler Murray threw for 230 yards and ran for 100, including a 22-yard scoring scamper, in the Cardinals’ 24-20 win over Jimmy Garoppolo (259 yards, two TDs) and the San Francisco 49ers.