The Jacksonville Jaguars are doing everything possible to make sure they lack teeth. Running back Leonard Fournette was waived Monday morning in a move that will fan the flames of tanking allegations. The news comes one day after the Jaguars traded their top defensive player, disgruntled pass-rusher Yannick Ngakoue, to the Minnesota Vikings for two …

The Jacksonville Jaguars are doing everything possible to make sure they lack teeth.

Running back Leonard Fournette was waived Monday morning in a move that will fan the flames of tanking allegations. The news comes one day after the Jaguars traded their top defensive player, disgruntled pass-rusher Yannick Ngakoue, to the Minnesota Vikings for two draft picks.

The prize for being the worst team in the NFL this season is the No. 1 overall pick and the good fortune of supposed can’t-miss franchise quarterback Trevor Lawrence of Clemson.

Fournette was the No. 4 pick in the 2017 NFL Draft – ahead of Christian McCaffrey, Patrick Mahomes and Deshaun Watson.

But Fournette, 25, hasn’t been a total bust and should have something left in the tank even though a limited trade market developed for his services. He rushed for a career-high 1,152 yards in 15 games last season and is averaging four yards per carry with 17 rushing touchdowns for his career.

The Jaguars tried and failed to trade Fournette, who now is subject to waivers. If he is claimed, a team inherits his contract with a $4.1 million base salary.

Here are seven teams that might be interested, especially if he clears waivers and needs a new contract.

Tom Brady firing passes to Mike Evans, Rob Gronkowski and Chris Godwin is tantalizing, but the backfield combination of disappointing starter Ronald Jones, veteran LeSean McCoy and rookie Ke’Shawn Vaughn is underwhelming. It’s one of the few places Fournette could be a starter right away.

David Montgomery’s availability for the start of the season is in question because of an injured groin suffered in training camp last week. Tarik Cohen is more of a complementary pass-catching back than a workhorse like Fournette, who ranks eighth in rushing yards after contact since 2017, according to Pro Football Focus.

How about reuniting with another Jaguars cast-off, Jalen Ramsey? The Rams are set to start rookie Cam Akers, with Darrell Henderson and Malcom Brown as backups. They cut their own running back top-10 draft pick, Todd Gurley, at a huge salary cap hit earlier this offseason, but these are different financial circumstances. 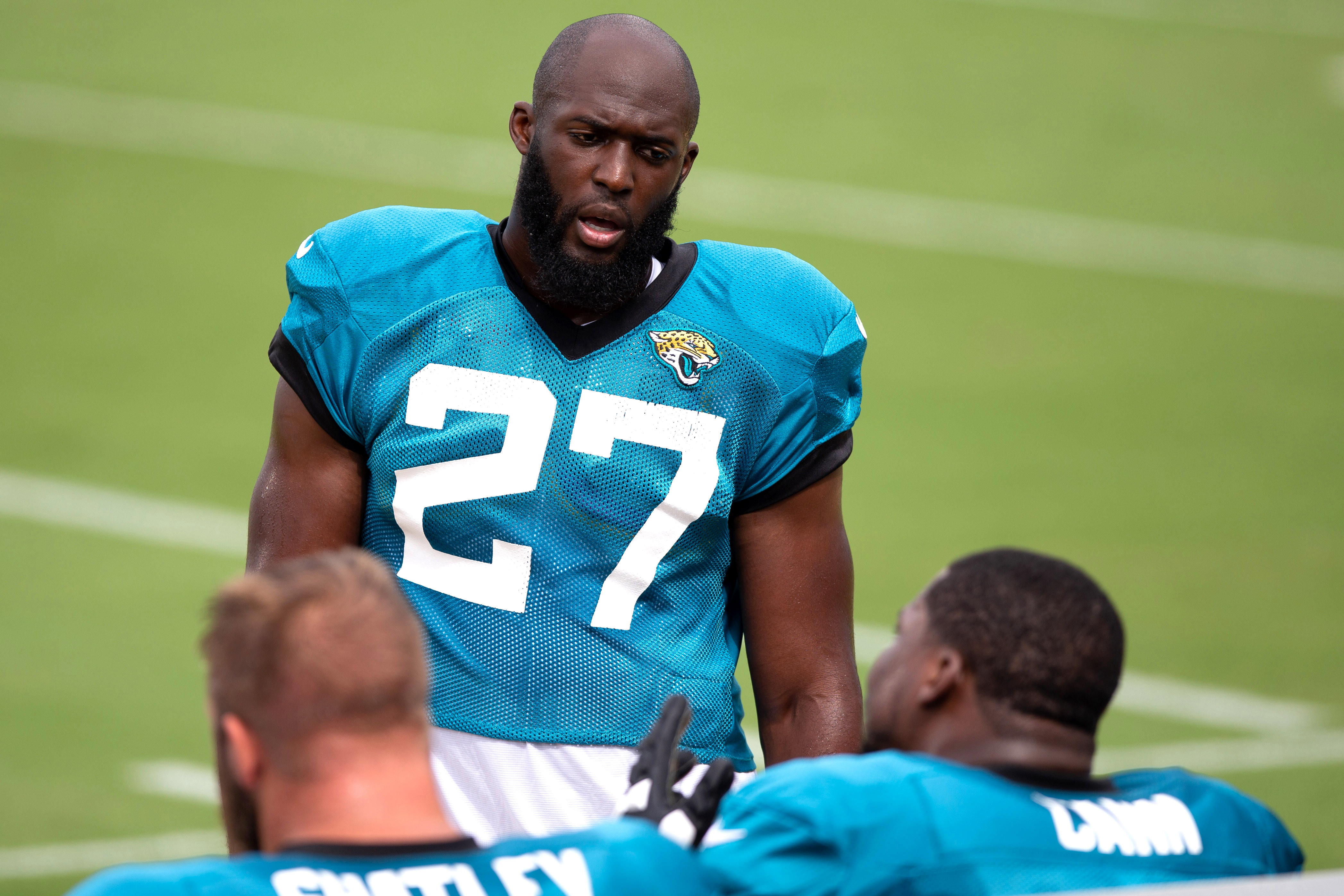 The Jaguars released Leonard Fournette on Monday morning in a…

Like his father did as coach of the Denver Broncos, Kyle Shanahan is showing he can find productive running backs on the street. Most fans had never heard of journeyman Raheem Mostert until the run to Super Bowl LIV. Now Mostert received a pay bump and is penciled in to start over Tevin Coleman and Jerick McKinnon. Fournette might overcrowd this backfield, but he would be the most talented option.

It is naïve to think 35-year-old future Hall of Famer Adrian Peterson will perform like he did at his peak. The recent release of Derrius Guice, who faces domestic violence charges and rape accusations, left a hole on the depth chart that Fournette could fill. Washington has an unusual strategy for a bad team, collecting veterans rather than giving reps to rookies.

They signed Gurley, who is still an unknown after the way his last two seasons finished. Fournette could provide insurance if Gurley’s mysterious injuries mean he is finished. The Super Bowl window is closing on the Falcons, if it is not already shut.

Isn’t this where careers go for revival? The Patriots have a running back battle between Sony Michel and Damien Harris, but Bill Belichick isn’t afraid to ruffle feathers by bringing a new talent into the room. Michel had offseason foot surgery but returned to practice last week.