Tupac Shakur’s teenage love letters and the Notorious B.I.G.’s “King of New York” crown are two of the top lots up for sale at the first Sotheby’s auction dedicated fully to hip-hop, taking place Sept. 15 in New York.

The auction will feature more than 120 items spanning hip-hop’s history, from its late-1970s origins through its mid-1980s to mid-1990s “Golden Age,” up to the present day. Per a statement, there will be a mix of “iconic artifacts, contemporary art, one-of-a-kind experiences, fine art and vernacular photography.” There will also be “vintage and modern fashion, historic and newly designed jewelry and luxury items, rare ephemera including flyers and posters and more.” A portion of Sotheby’s buyer premium will be donated to Building Beats, a non-profit that teaches tech, entrepreneurial and leadership skills to underserved kids through DJ and music programs.

Monica Lynch, former president of Tommy Boy Records and an instrumental player in the careers of Afrika Bambaataa, Queen Latifah, De La Soul and more, helped organize the auction. The majority of items were consigned directly by artists or their estates. A dedicated exhibit featuring items from the sale will be on view by appointment at the Sotheby’s gallery in New York between Sept. 11 and 15, while the exhibition will also be available to the public online.

While the full contents of the auction won’t be announced until a later date, Sotheby’s did detail the two aforementioned lots: Tupac’s love letters and Biggie’s crown. The letters comprise 22 autographed notes a 16-year-old Tupac wrote to his high school girlfriend Kathy Loy, which are estimated to be worth between $60,000 and $80,000.

Written between March 1987 and April 1988, the letters chronicle the couple’s two-month relationship — plus a “letter of regret sent a year later” — but also offer some insight into Tupac’s friendship with fellow student Jada Pinkett (“Jada told me she can see how much I love you,” Tupac told Loy in one letter). The letters also capture Tupac’s natural command of language and lyrical prose, with one excerpt reading, “I love you now more than ever, want you now more than before. No one compares to you, the one that I adore.”

(This isn’t the first Tupac love letter/letter of regret to head to auction: In 2019, a missive he sent Madonna, whom he briefly dated in the Nineties, went to auction last year after Madonna had tried to stop the sale.)

As for the Biggie lot, the autographed crown is the same one the Brooklyn rapper wore during his “King of New York” photoshoot with Barron Claiborne in 1997, just days before he was shot and killed. The lot will come with three unique prints from the shoot, made and signed by Claiborne, plus the contact sheet. It’s estimated to sell for between $200,000 and $300,000. 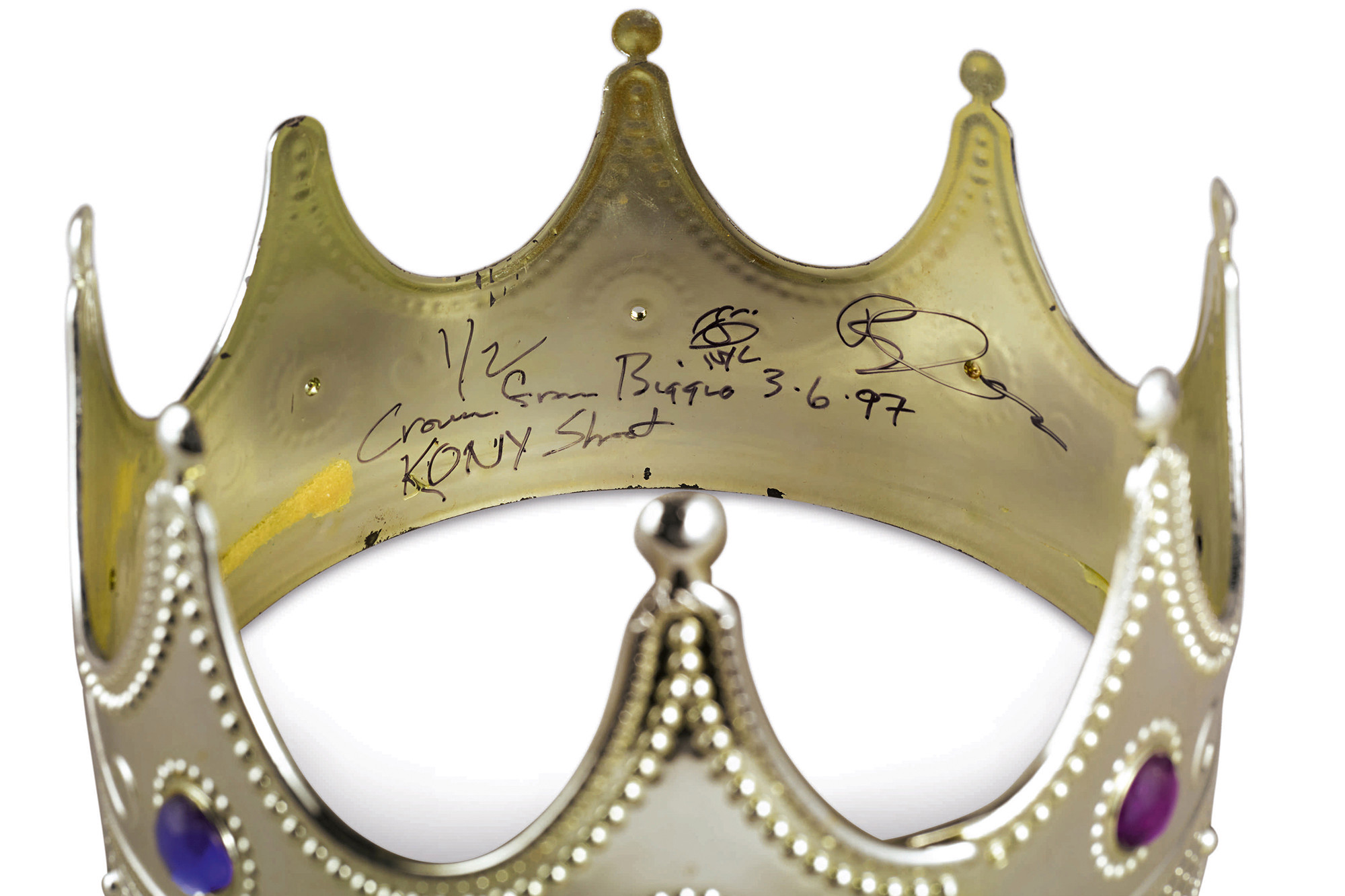 The inside of the crown worn by Notorious B.I.G. is inscribed, signed and dated 3/6/97. 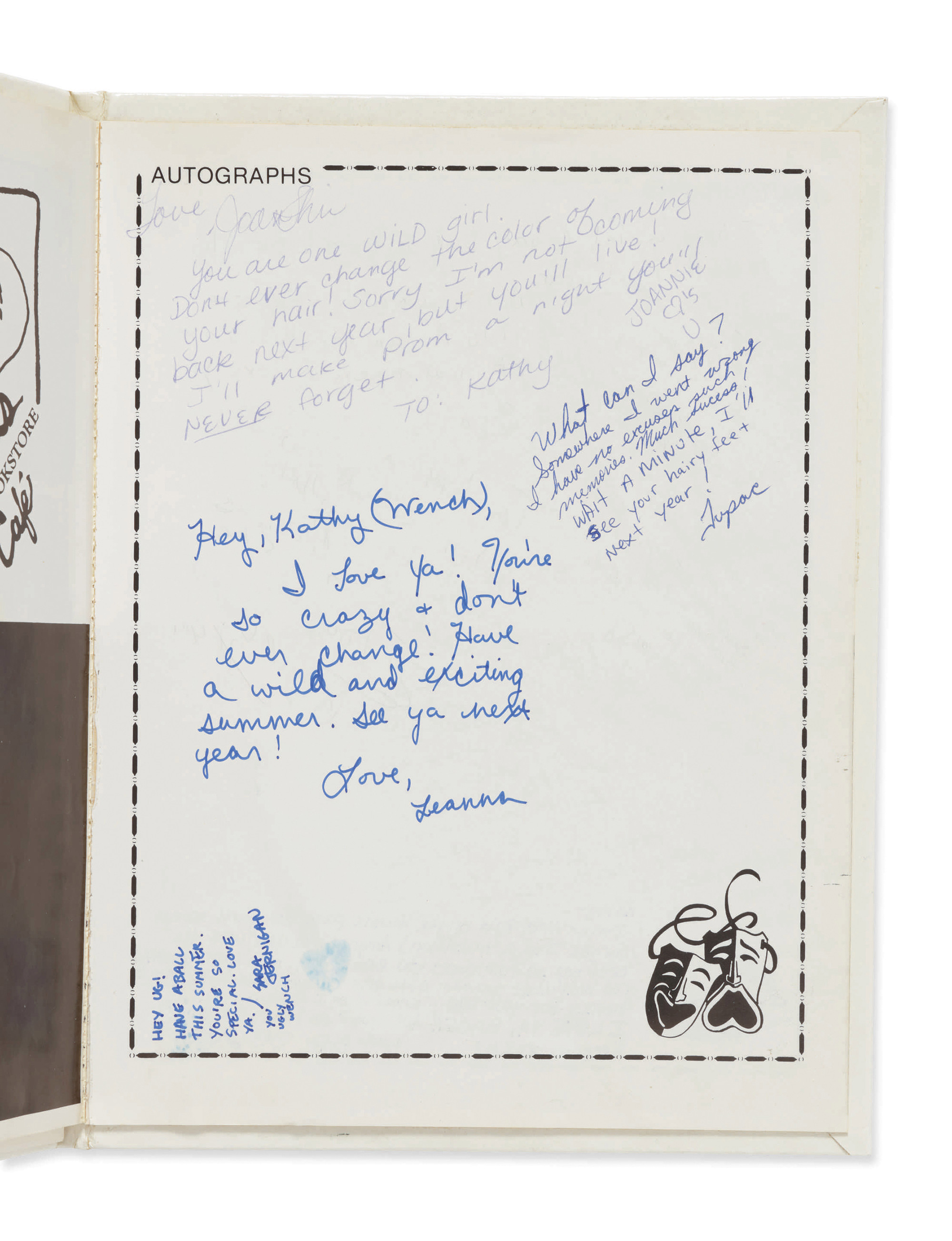 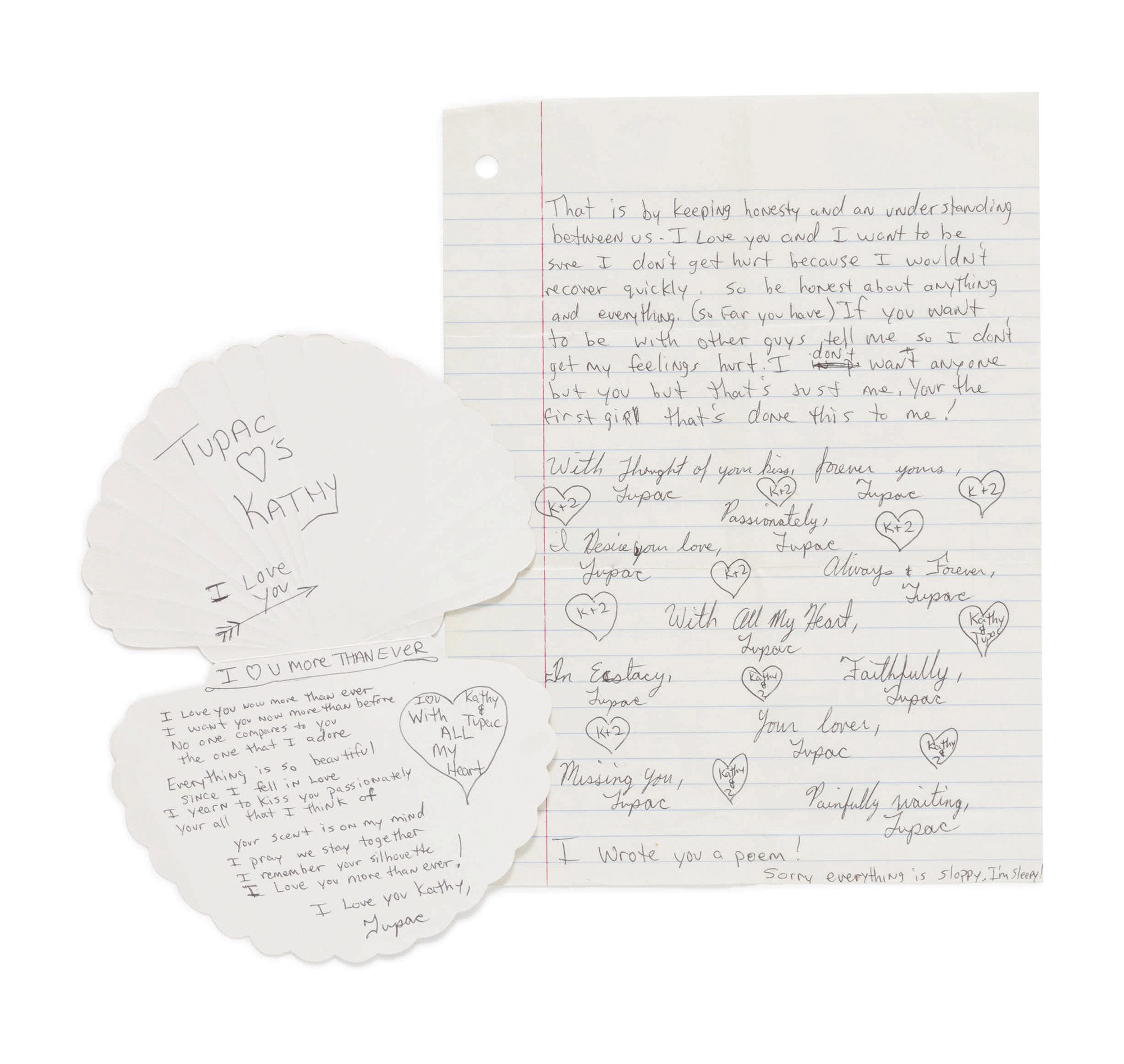 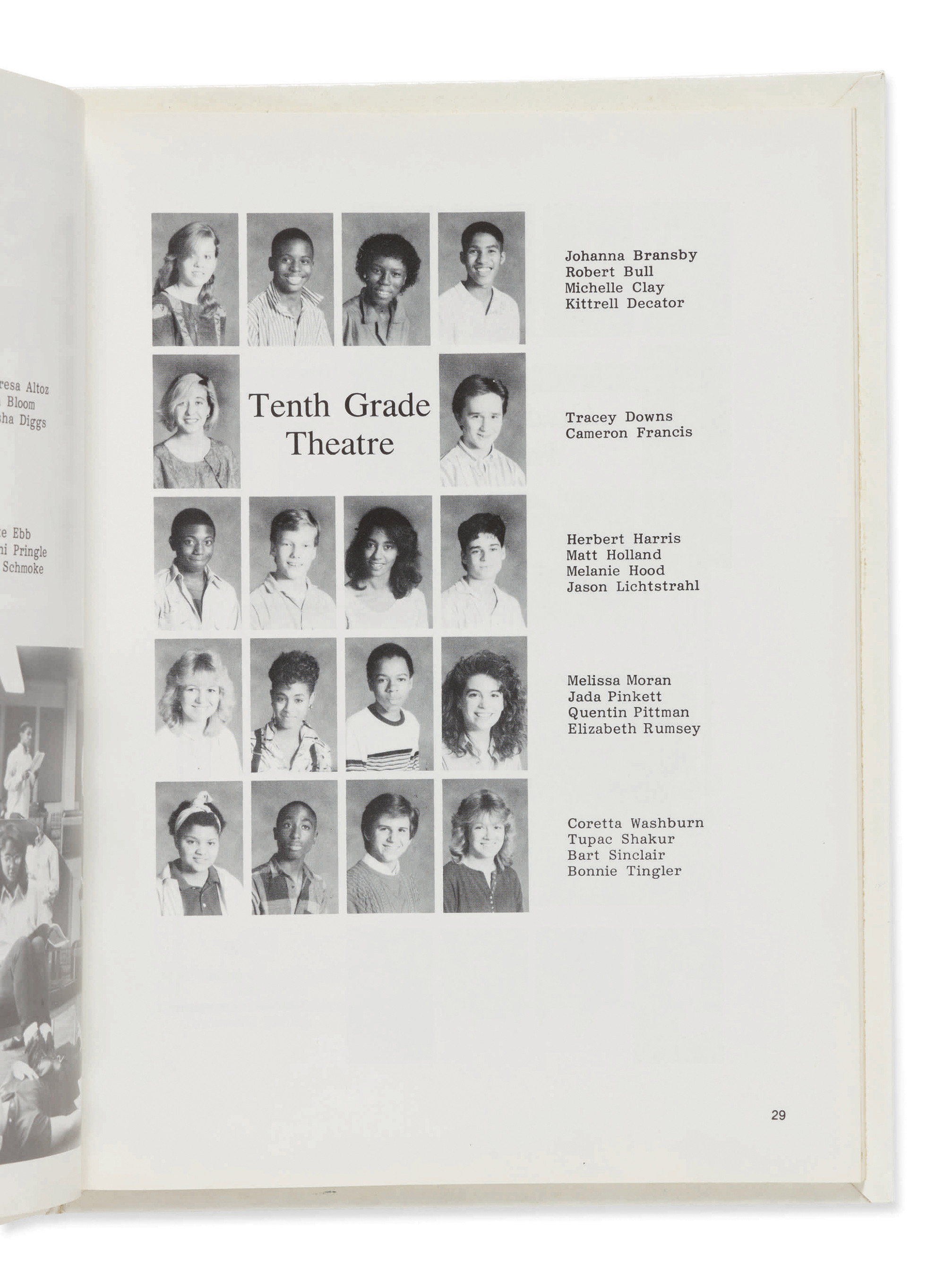 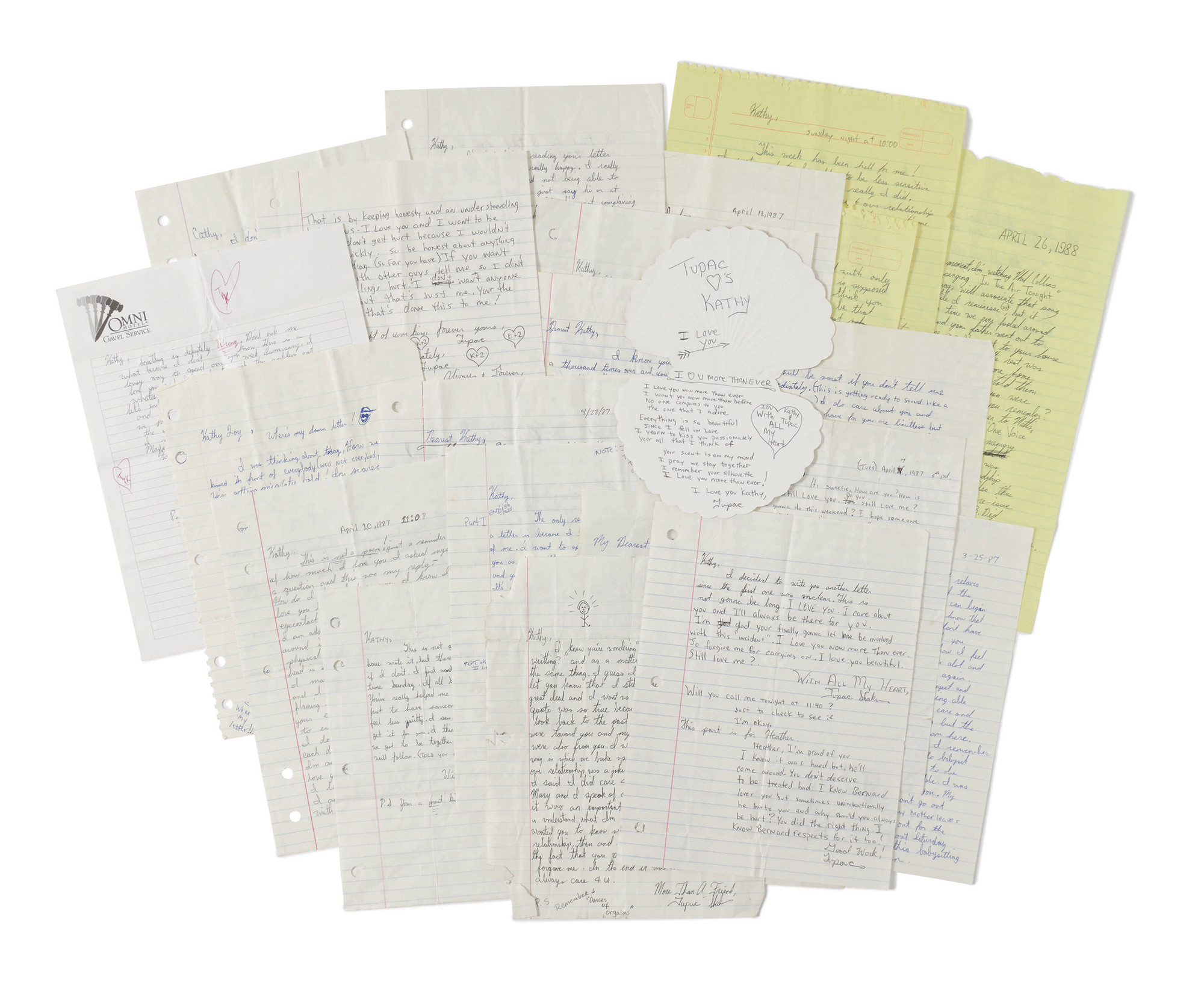