Inside the cult of ‘Animal Crossing’

Forget baseball. In a pandemic, “Animal Crossing” is the true national pastime. Life is simple in the latest version of Nintendo’s popular video-game franchise. Players assume a cutesy avatar and move to a tropical island, which they’re tasked with building up while making nice with their neighbors. There are no levels or bad guys or …

Forget baseball. In a pandemic, “Animal Crossing” is the true national pastime.

Life is simple in the latest version of Nintendo’s popular video-game franchise. Players assume a cutesy avatar and move to a tropical island, which they’re tasked with building up while making nice with their neighbors. There are no levels or bad guys or battles — just polite social interactions, shopping decisions and chores suggested by the island proprietor, Tom Nook.

“It’s this adorable, idealized version of a life that you completely control and design — like ‘The Sims’ but without any drama,” says player Austin Voigt, who lives in Minneapolis and writes gaming how-to guides for NintendoLife.com. “You can’t die in the game. You can’t even really get hurt … And it doesn’t end. There are things to do every day in the game, because it works like real time.”

If this all sounds mundane, it’s the kind of mundanity people are craving. “Animal Crossing: New Horizons” launched on Nintendo Switch in late March, just as America was rolling out early coronavirus lockdown protocols. Within six weeks, the $60 game sold a record-shattering 13.4 million copies.

For quarantiners, it’s become the platform of choice for connecting with people — you can share a code to give them access to your island — while escaping from reality at the same time. Even celebs are into it: Guy Fieri lords over a virtual Flavortown island, Elijah Wood is stocking up on digital veggies and “Queer Eye” interior designer Bobby Berk  — who doesn’t even play the game — is advising fans on their “Animal Crossing” decor choices on Twitter.

“I think we all want to be transported to another world at the moment,” Berk, who’s 38 and has played previous “Animal Crossing” games, tells The Post. “It’s a really great way to take yourself to a happy place where you’re not bombarded by [bad] news.”

Ready to channel your “Animal” instincts? Here’s our comprehensive guide to the low-stakes game our high-stakes world seems to need right now.

Superfan Voigt spends up to five hours a day escaping into her soothing “Animal Crossing” world.

“I will listen to the soundtrack while I’m cleaning,” she says. “I purposely built a waterfall behind my house in the game because I liked hearing the noise of a waterfall … It’s wonderful, like ASMR.”

A relaxing soundscape helps, but “Animal Crossing” also addresses psychological needs on a deeper level. Jamie Madigan, founder of PsychologyOfGames.com and author of “Getting Gamers: The Psychology of Video Games and Their Impact on the People Who Play Them,” says that the game’s ultracustomizable world provides a rare resource during pandemic times: options.

“It gives you a sense of competence or control over the experience,” says Madigan. From managing your inventory to redecorating your house to exploring the virtual outdoors, “Animal Crossing” players can experience “some choice and some autonomy … that we’re not necessarily getting in our day-to-day lives.” 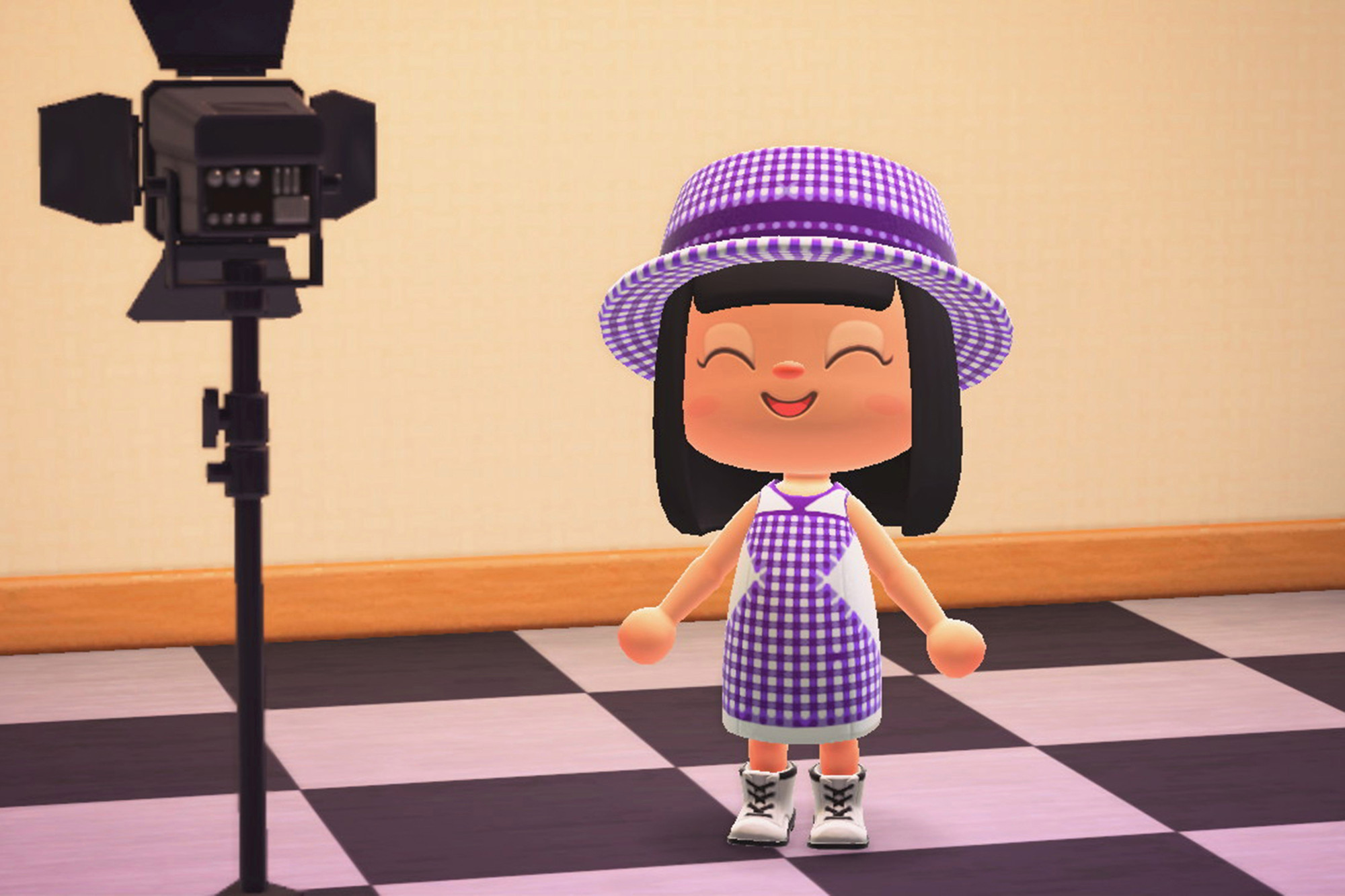 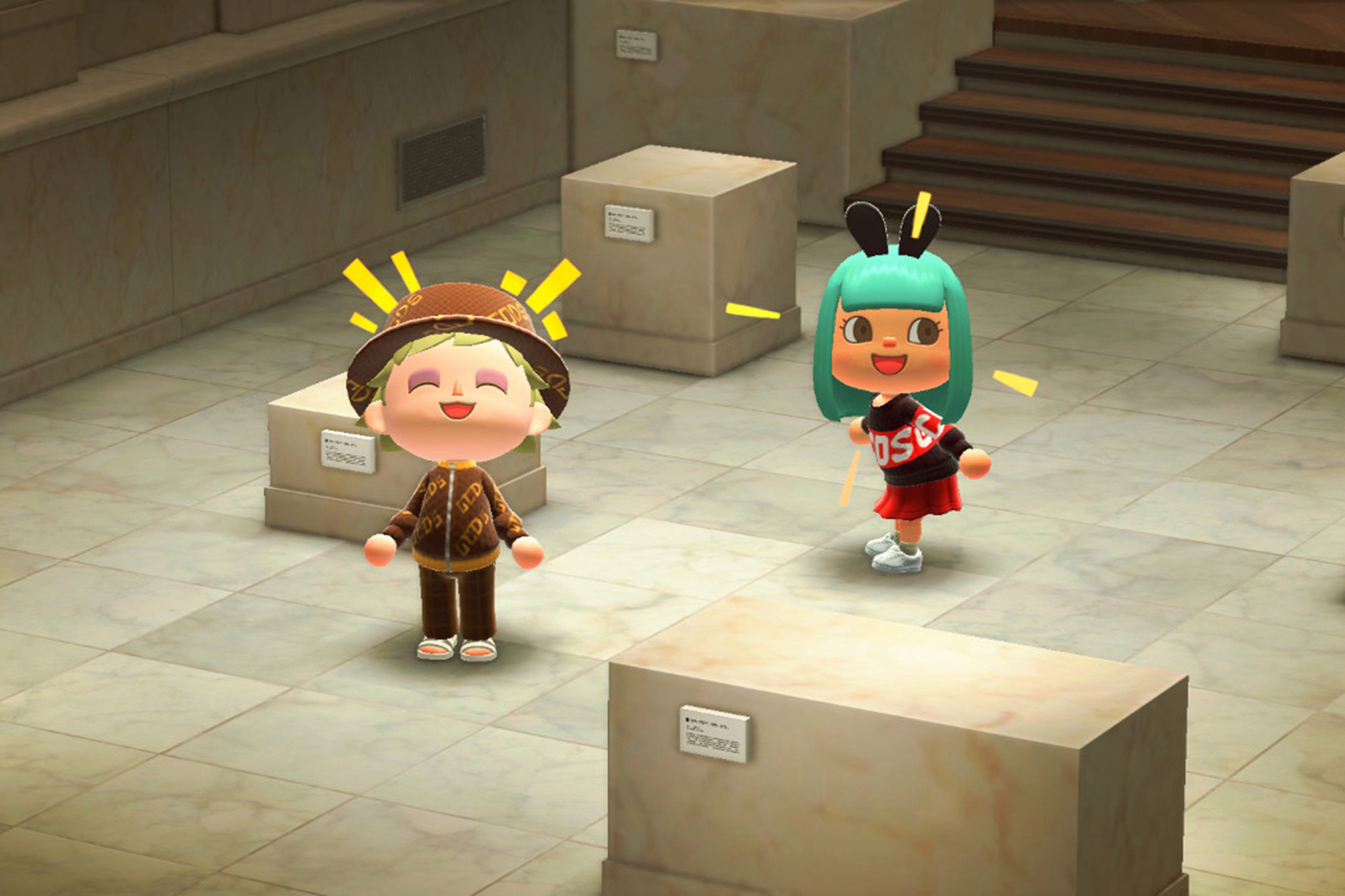 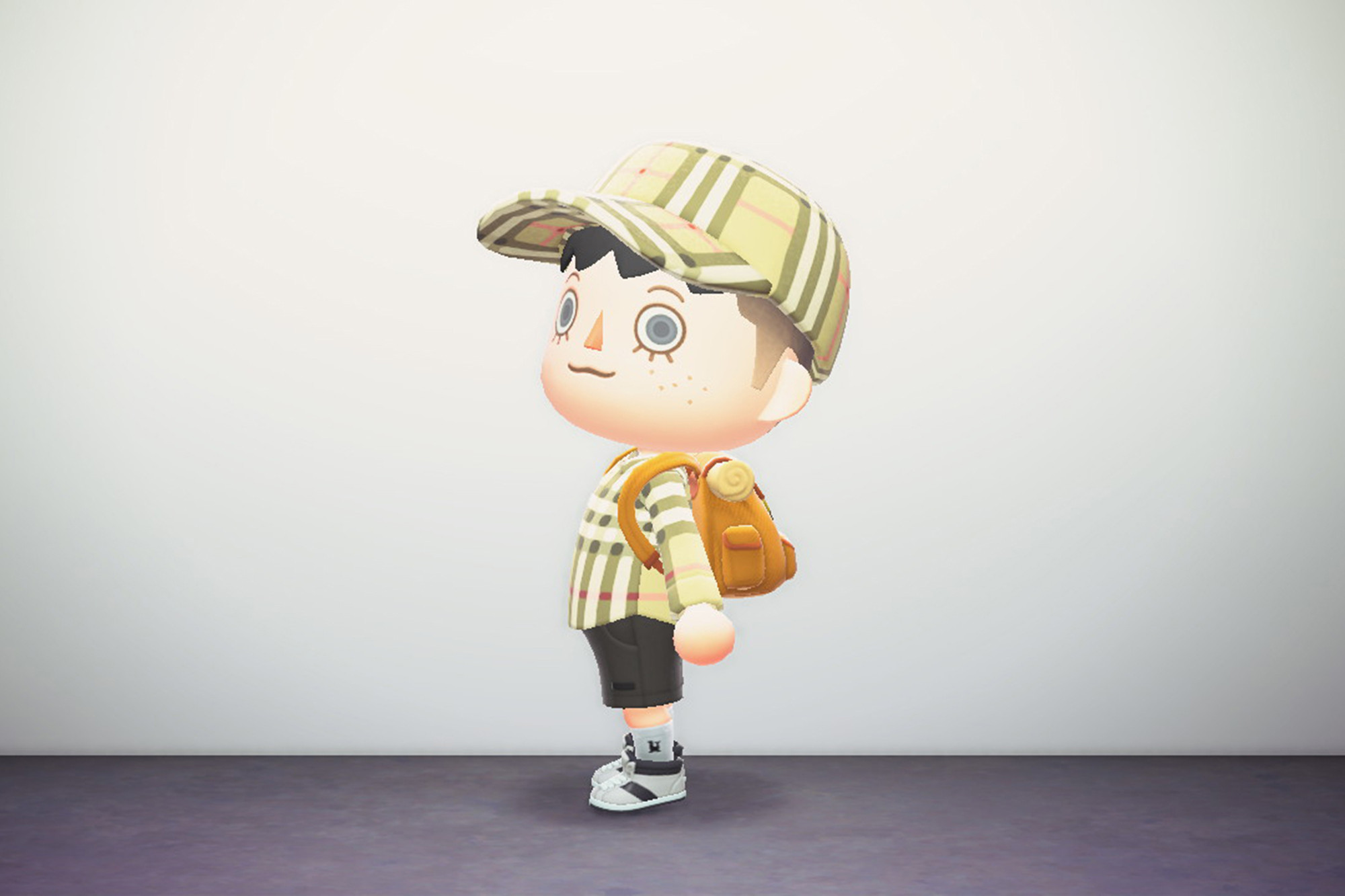 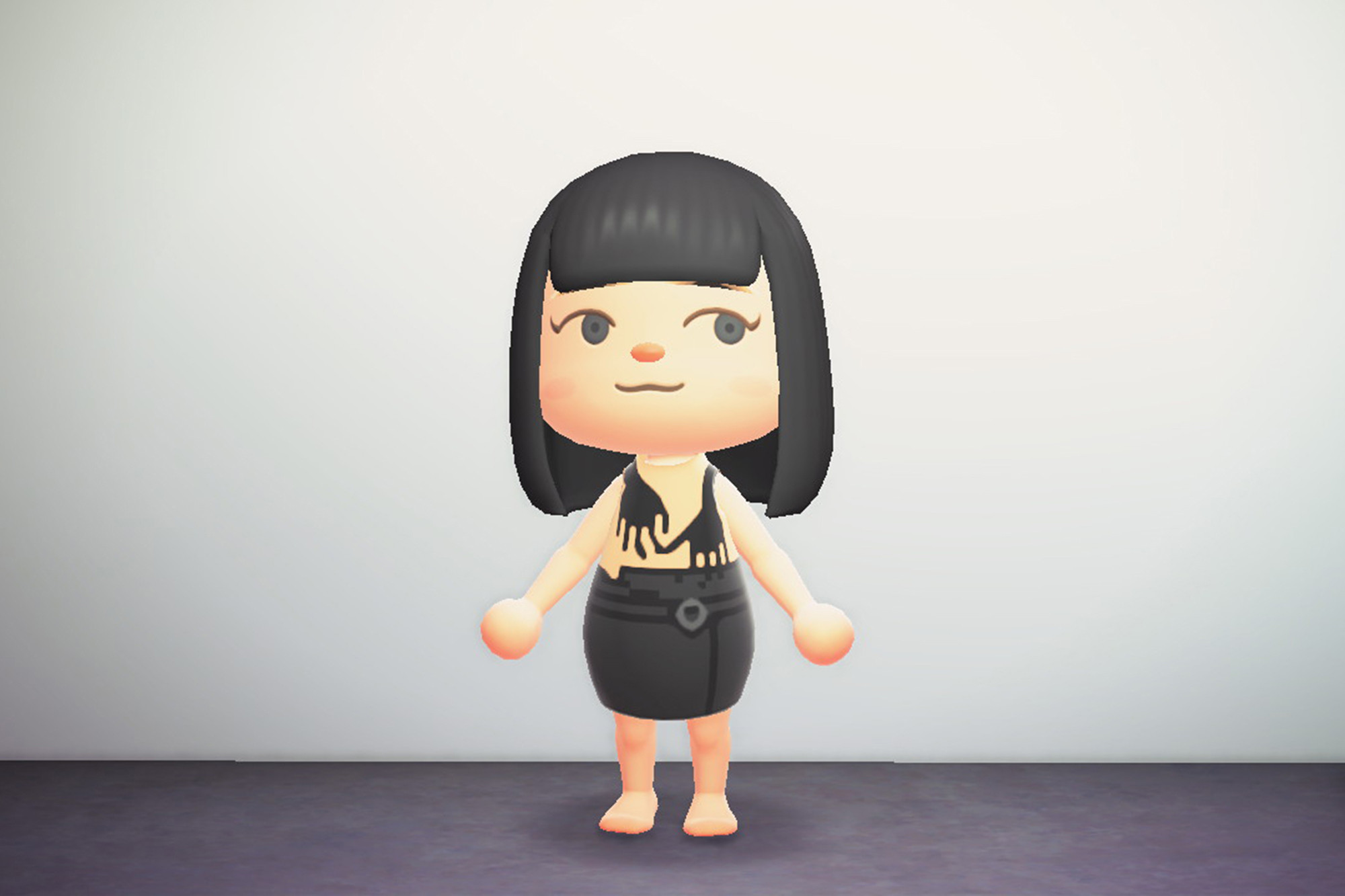 Maybe you haven’t felt the need — or desire — to peel off your pandemic sweats lately. But in “Animal Crossing,” there’s real motivation to dress up digitally. Projects like Animal Crossing Fashion Archive and Nook Street Market have created designer-dud knockoffs, which gamers can access by inputting a special code. If you’re a brand snob, luxury labels — including Anna Sui, Valentino and Marc Jacobs — sell their official virtual designs in the game’s stores.

Giuliano Calza, the Naples-based co-founder of cool-kid fashion brand GCDS, says his “Animal Crossing” designs are for people “who wouldn’t normally [be able to] afford them.” During these weird times, he says, “I want to make them feel a part of something.” 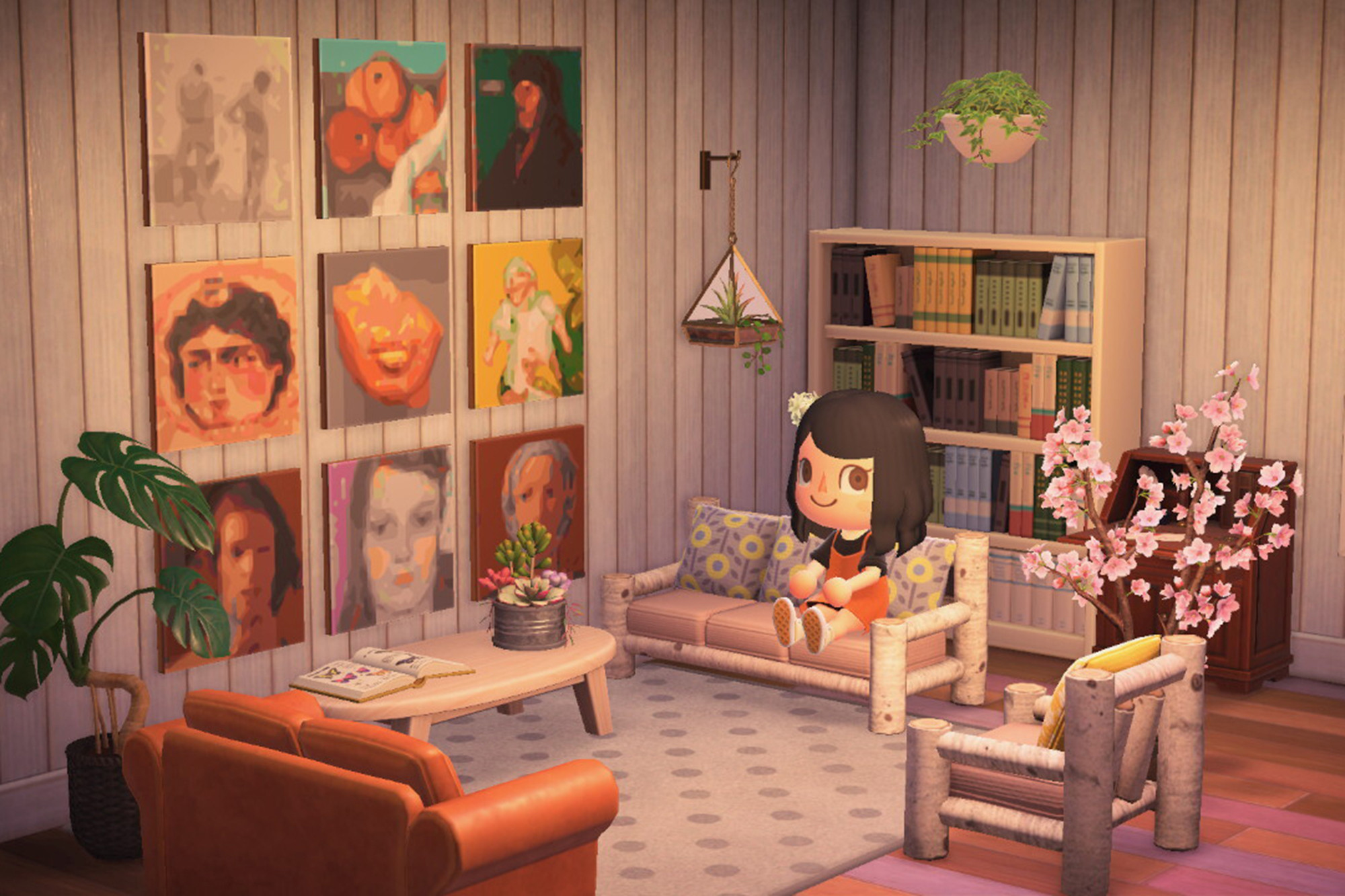 The Met in “Animal Crossing.” 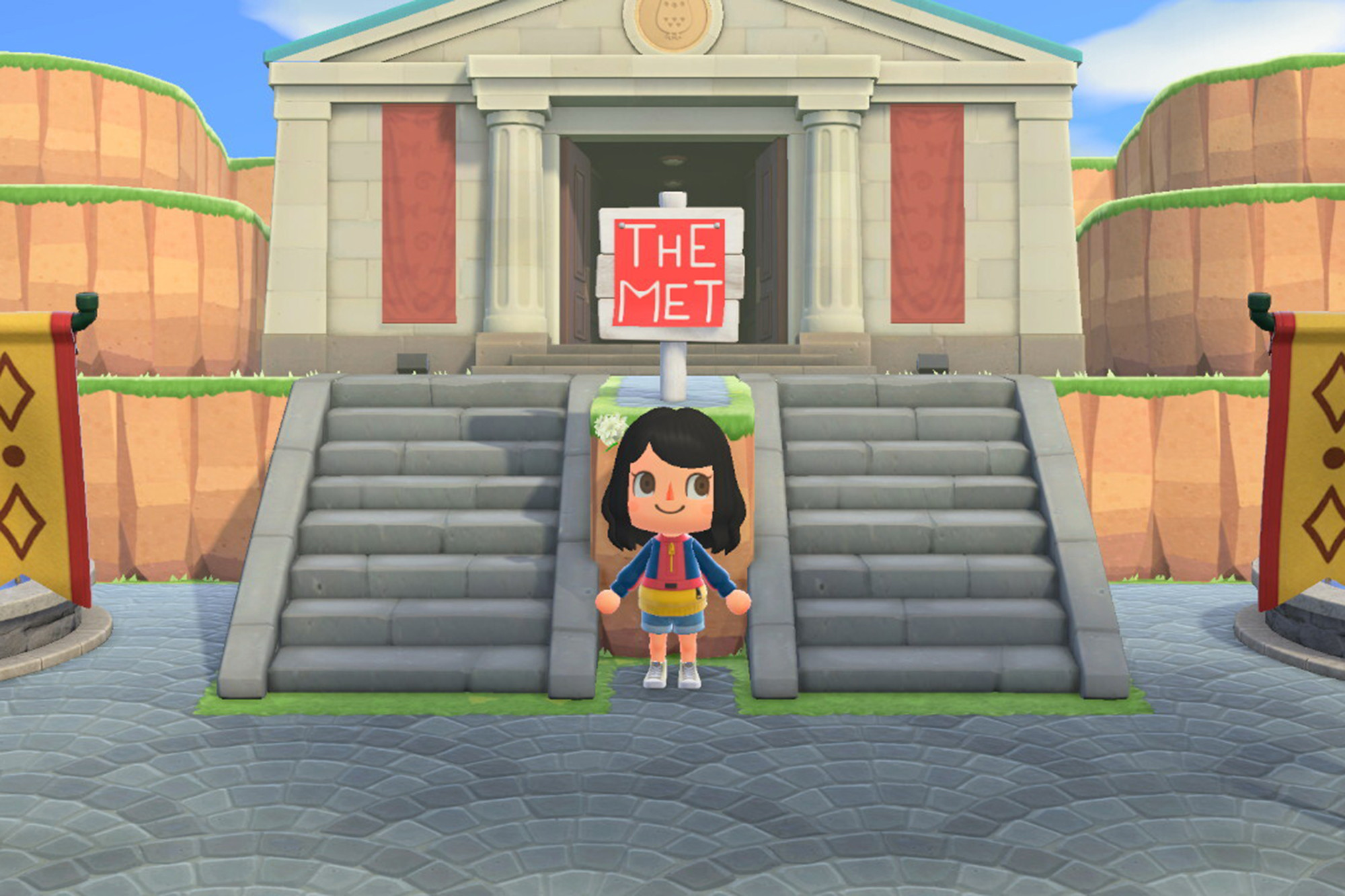 There’s also the allure of building your own environment — and filling it with beautiful things.

“Art is especially important during these unsettling times,” says Sofie Andersen, who heads up the Metropolitan Museum’s digital team. “It can help make the world feel alive and expansive.”

To that end, the Met is allowing users to decorate their “Animal Crossing” domiciles with artworks from the museum’s collection. Similarly, Los Angeles’ Getty museum allows players to virtually re-create or repurpose pieces by Renoir, van Gogh and other artists.

When college senior Jessica Kovalick, of Mount Laurel, NJ, realized that COVID-19 was about to ruin her social life, she bought a Switch so she could play “Animal Crossing.” The 23-year-old wound up making a new friend: “Lord of the Rings” actor Elijah Wood.

The game has a feature called the Stalk Market, where players buy and sell turnips — yep, the root vegetable — in exchange for “bells,” the game’s currency. When Kovalick announced on Twitter that her island was buying turnips at a decent rate, Frodo popped by to make a sweet deal. She just hopes she was an OK host.

“I’m sure it was very off-putting,” Kovalick says. “All my friends” — or their avatars, anyway — “are just standing there, like, staring at him.”

We’re all getting a little sick of Zoom calls. But “Animal Crossing” gatherings feel different, somehow.

“It’s fun,” says Austin Parker, from Albany. The 37-year-old produced a live tech conference, Deserted Island DevOps, on “Animal Crossing” and livestreamed it on Twitch. “I think it got people really engaged in a way that a [videoconference] call couldn’t. And it’s fun, right? People want something fun and cute.”

On a more personal level, the game has allowed some players to forge deeper connections with loved ones. Video-game developer Paul Hubans got his grandmother, Audrey Buchanan, hooked on an older version of “Animal Crossing” back in 2012, when he was concerned that she needed more engaging hobbies.

“She is a widow and single mother,” says Hubans, 33, of his 88-year-old grandma. In her first two years playing, she logged nearly 4,000 hours of game time. Today, “we play ‘New Horizons’ together,” says Hubans. “Her island is called Wells Isle, named after a place called Wells Creek where she grew up.”

And for Brittany, from Alberta, Canada, “Animal Crossing” has offered a low-stakes way to reconnect with her long-lost little sister. The pair, who have the same father but were raised in separate families, met virtually for the first time about six months ago. They were shocked by how alike they were — right down to their “Animal Crossing” avatars.

It was “too funny,” says Brittany, a 28-year-old travel agent who declined to share her last name to protect her family’s privacy. She’s a veteran of the older “Animal Crossing” games, and says this has been a real bonding experience for her and her sister.

“As cheesy as it sounds, it’s almost like me imparting my ‘Animal Crossing’ wisdom on to her,” she says.

Although Kovalick hasn’t reconnected with any distant kin in the game — just Frodo, for now! — she’s used it for a special gathering with her friends. On Saturday, she and a few fellow seniors met on a little digital island to stage their college graduations — complete with a podium, caps and gowns. 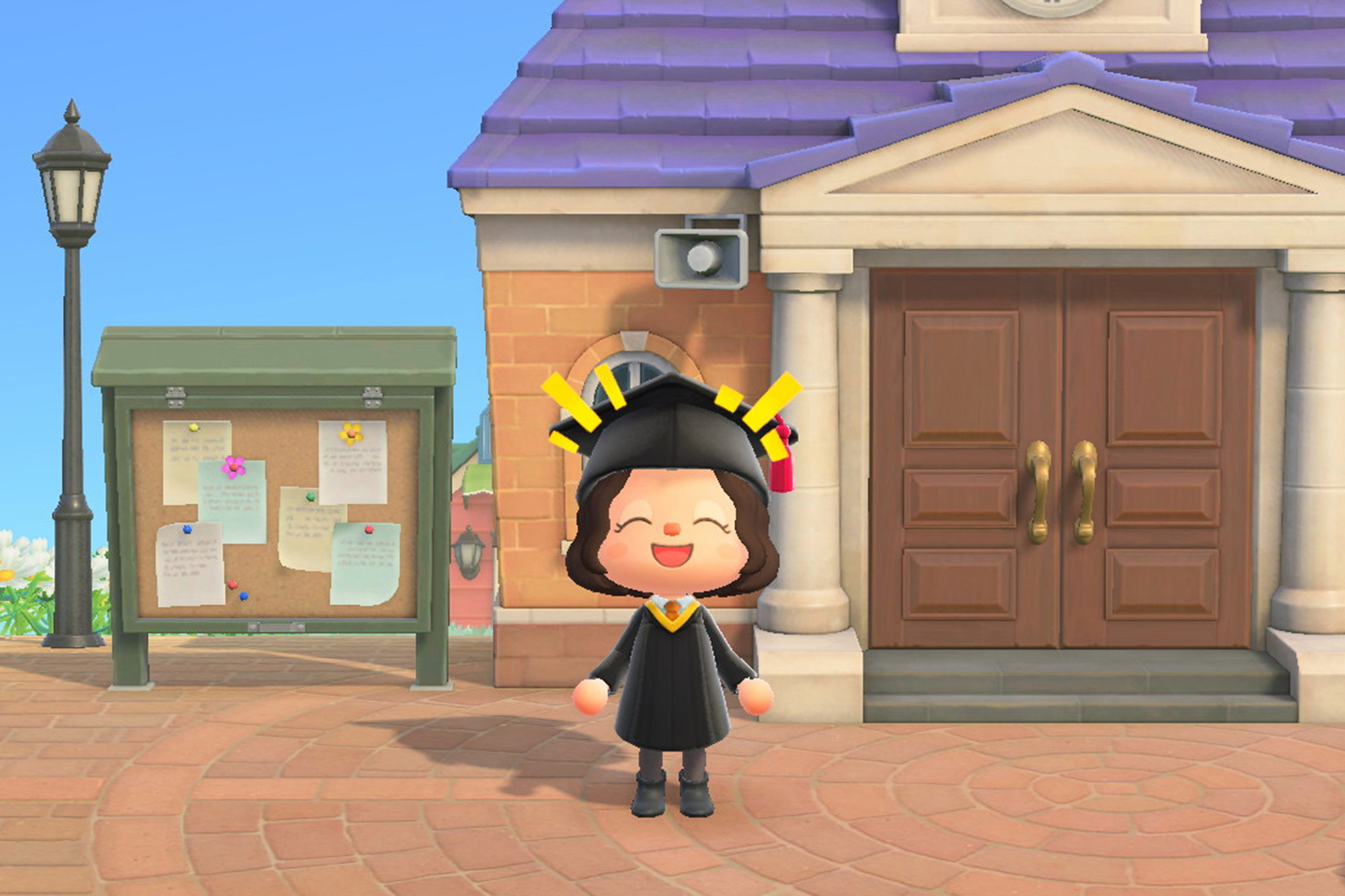 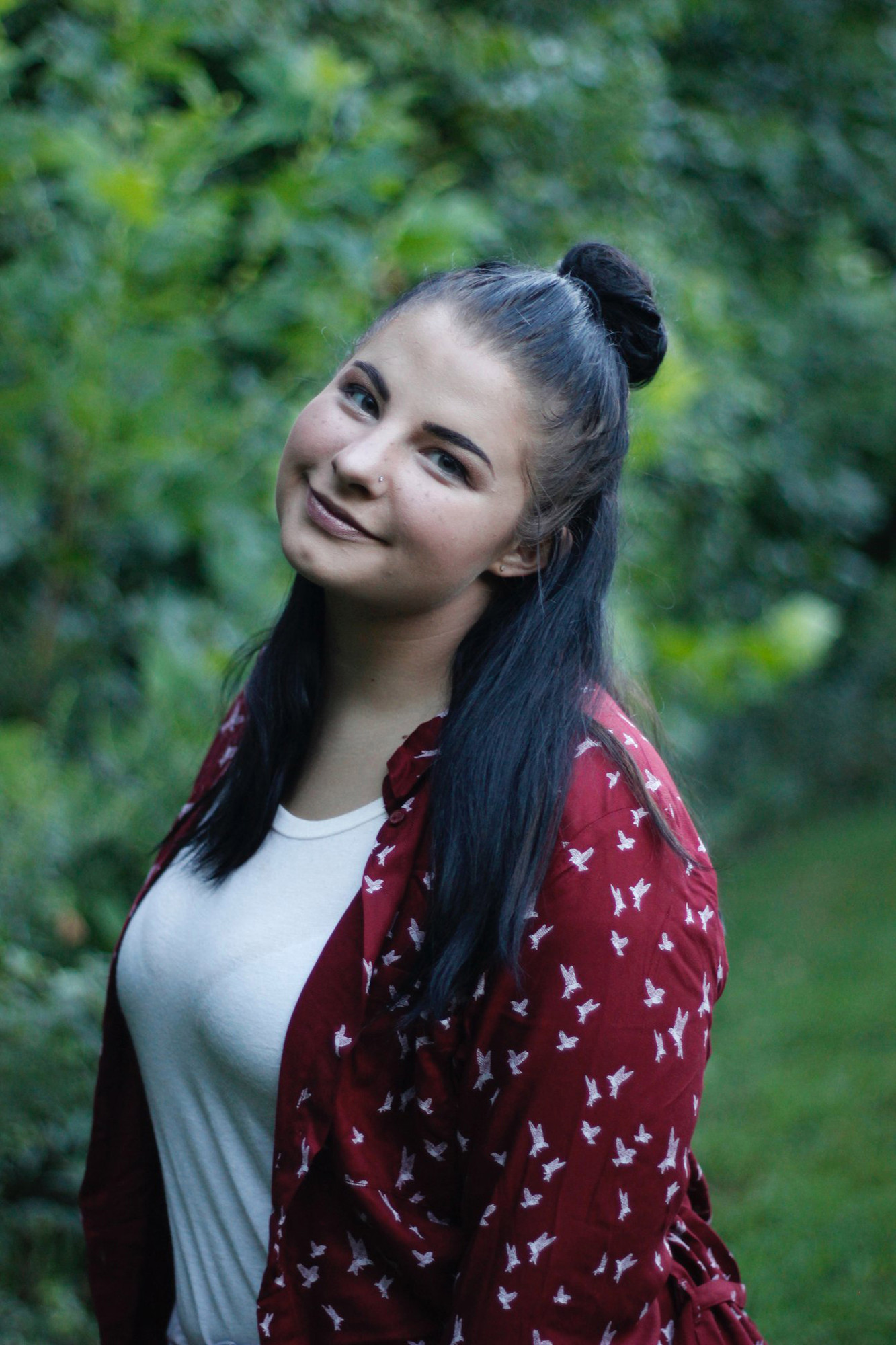 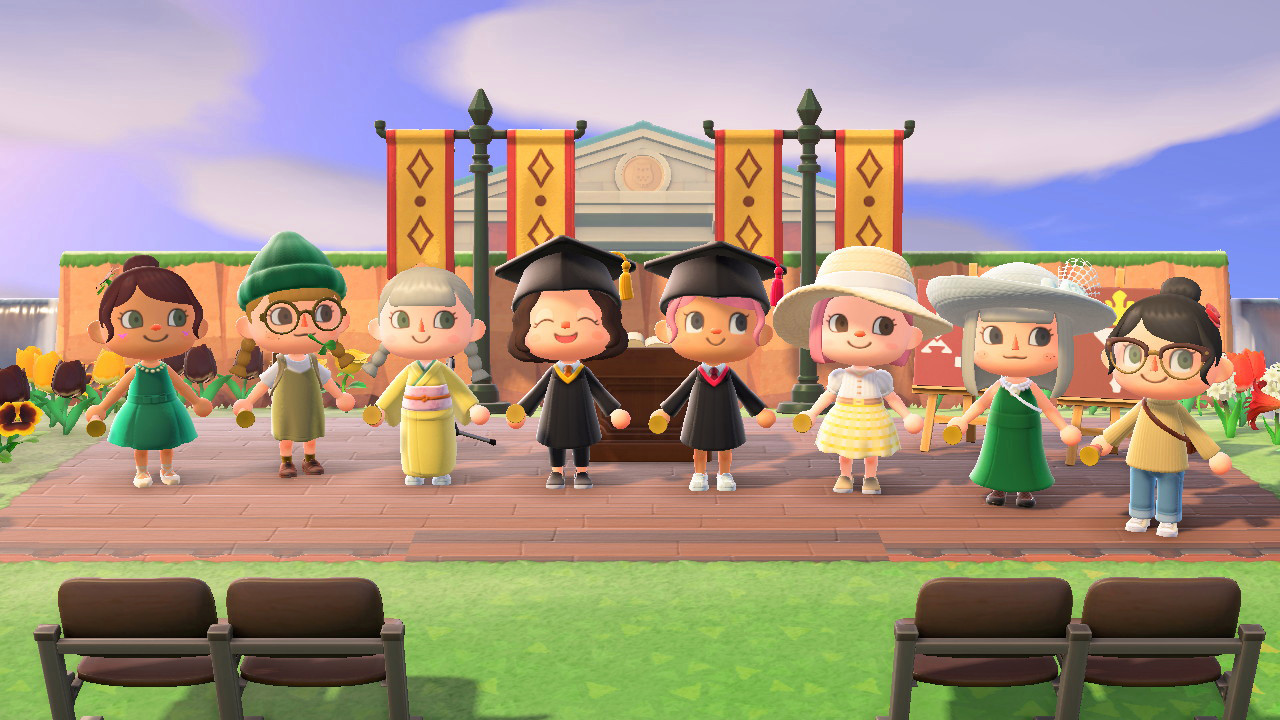 Her one concern? That after all these weeks on lockdown, the real world just won’t hold up to her “Animal” planet.

“It feels nice to design a home here,” she says. “It looks pretty good … I’m like, ‘Yep, this will never look this good in real life.’ ”

More from: USAGAG
1
Best Tips for Free Fire Beginners How to play ...
2
Among Us: Best Tips to succeed as a Crewmate ...
3
The birth of the modern American libertarian movement can ...
4
The Shabaka Stone: Ancient Relic tells of God Ptah ...
Filed under social media ,  trending ,  video games