How to Make Excellent Choices Rapidly

How to Make Excellent Choices Rapidly

To form a great decision, you need to consult with those who can contribute in a meaningful way.

Early in my career, I thought, like many young leaders, that a good decision was one that was liked by most people. When my coworkers smiled and nodded their heads as a group, I knew (at least in my mind) that I was a good decision maker.

But as time went on, I saw that this was a bad idea. To get a lot of people to agree on something, you have to give up a lot of your own ideas. The decision that comes out of this is the one that everyone can live with, but no one is really happy with.

Worse, trying to reach a consensus is almost always excruciatingly slow, and the higher up a leader goes, the less time they have. During my time as a senior executive, I was often asked to make quick, important decisions in response to sensitive events, such as a negative news story that needed an immediate response, a procedural breach that was being investigated by regulators, a major change to financial guidance, a catastrophic asset failure, and so on. 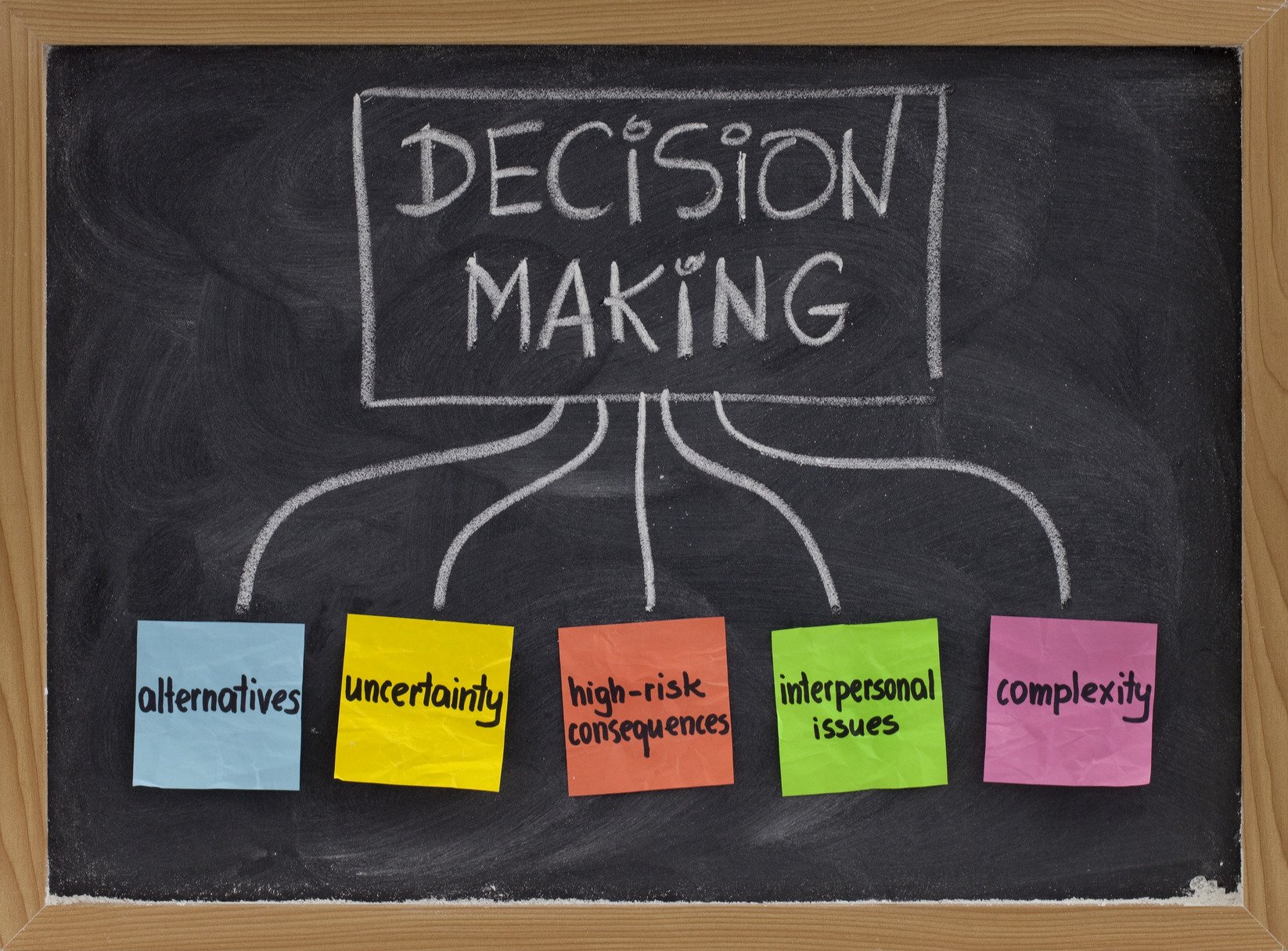 I found that the decisions I made quickly were at least as good as the ones I agonized over for days. Sometimes they were even better.

This made me think about two things:

I distilled my learnings into the eight elements that optimize both the speed and accuracy of my decisions. Over the last 10+ years of my corporate career, putting this philosophy into practice has helped me lift my leadership performance and greatly enhance the outcomes of my team.

The Eight Elements of a Great Decision

As a new leader, you can stand out from your peers if you can learn to make good decisions without hesitating or putting them off. While others waver over hard decisions, your team could be meeting deadlines and delivering results that really matter. That's something that will make people take notice of you and your team.

The only sure way to figure out how well a decision worked is to look at the results. Over time, you'll learn whether a choice was good, bad, or a wash. But if you only look at what happened in the past, it can be hard to make better decisions. This is because hindsight is very prone to attribution bias.

Still, if you had a list of things to look for in a decision (like the one below), you could tell ahead of time if it was likely to be a good one or not. From what I've learned, these are the eight most important parts of making good decisions.

1) Great decisions are shaped by consideration of many different viewpoints.

You shouldn't try to get everyone to agree with you, but that doesn't mean you can act on your own. If you want to make a good decision, you need to talk to people who can give you useful information.

This doesn't mean that you should ask everyone what they think. The right people with the right knowledge need to say what they think in a clear way so that the responsible decision-maker (that's you) can get a bigger picture and make the best choice. Healthy, robust debate starts with people wanting to know what they think. It will help you understand the problem you are trying to solve better and come up with smart, effective ways to solve it.

2) Great decisions are made as close as possible to the action.

Who should you ask for their opinion before making a choice? People with the most knowledge, experience, and different points of view on the problems at hand. Usually, this is a lower-level worker in the organization, not someone in the room where the decision is being made.

Remember that the people with the most power at your company are rarely the ones doing the work on the ground. Ask the people on your team who are closest to the action for their thoughts and advice, and give them credit if they help you make a better choice.

3) Great decisions address the root cause, not just the symptoms.

You might be wondering what kind of information you should ask your teammates or coworkers for. When we have a hard problem, we often try to figure out the symptoms instead of the main problem that caused the problem in the first place. If you do this, you'll have the same problem again in the future.

Even if you need to take care of the symptoms right away, you should always come up with a plan to fix the cause. Talking to the people who know the most about the problem will help you figure out what it is. Use your time with them to find out about these things.

4) Great decisions are made by a clearly accountable person.

Even if you get all the information you need to make a good choice, remember that you are the only one who can take responsibility for it. Weak leaders like it when the people around them agree with the decisions they make. They don't want to be put on the spot by making a decision that might not be popular, even if it's the right thing to do. But when responsibility is shared, it makes it harder for you to make a decision and lessens your power as the person in charge.

Going out on a limb can be scary when you're still getting used to being a leader, especially if you're just starting to feel more confident. Even so, taking charge and making sure that every big decision is made by someone who is clearly accountable is key to building trust with your team members and your bosses, showing that you can work on your own, and improving performance overall. Without accountability, your only tools are management by committee and making decisions by getting everyone to agree.

5) Great decisions consider the holistic impacts of a problem.

One way to build your confidence is to regularly practice weighing the risks and possible effects of each decision you make. All you have to do is think as widely as you can to come up with the "what ifs" of your choice. How likely is it that a possible bad outcome will happen, and what would happen if it did?

For example, if you want to change the scope of one of your team's projects, you might need to think about how that might affect the budget, the time frame, the quality, and the satisfaction of your customers.

The longer you work, though, the more obvious it is when you don't pay enough attention to how your decisions will affect you in the long run. To find true value, you need to find the right balance between short-term and long-term goals. The sooner you can think about this when making a decision, the better.

Even though not everyone with a passing interest should necessarily be involved in the decision-making process, everyone should agree on the outcome. That's why it's so important to let the stakeholders, including the powerful people in the room, know what your decisions are about and why.

The point of this message isn't to get permission or agreement on how you'll solve the problem. Instead, you're trying to get everyone on the same page, which is often necessary for a big decision to be carried out smoothly.

To make decisions faster, you need to know what makes a good decision good in the first place. Taking into account all of the above factors, it's just a matter of tackling each one with a greater sense of urgency.

For example, instead of painstakingly asking everyone who wants to give their opinion, only ask those who can really add something to the conversation, and don't wait until everyone agrees. Instead, use your own judgment and a cost-benefit analysis to figure out the best way to move forward based on the information you have.

Many leaders don't make decisions right away because they're afraid of making a mistake or, even worse, of not being liked. But the amount of time you should spend on any one part of making a decision should be based on one thing: risk. Whether you should be more or less careful will depend on how you judge the risk.

If you decide to evaluate your decisions from the future, you'll find that you can make better decisions faster than you ever have before. If you learn this as a young leader, it will speed up your growth and help your team do better. The higher up you go in your company, the more this skill will affect the culture and performance of the company.

More from: USAGAG
1
Thermodynamics, Natural Gas, and Electricity
2
Brain research indicates that quantum entanglement is essential for ...
3
The government will make you even poorer
4
Just say no to the new war that won't ...
Filed under great decision ,  Excellent Choices