Did the US behind Nord Stream Leaks?

Did the US behind Nord Stream Leaks?

Even if you don't like Tucker Carlson, you should still watch his show from last night. It's about how the Nord Stream pipelines were sabotaged under the water. Tucker says there is no good reason for Russia to have messed up these pipelines. Why would the Russians stop something from working?

It's about how the Nord Stream pipelines were sabotaged while they were under water. Tucker says there is no good reason for Russia to have messed up these pipelines. Why would Russia stop working the thing that gave them economic power over Europe? I mean, maybe they did it, but it's hard to see why, since they could have cut off gas to Europe without destroying their own equipment if they wanted to.

But, as Tucker says, it's not hard to see why the US would want to damage the pipelines. He shows clips of Joe Biden and Victoria Nuland from the State Department saying earlier this year that it would be a shame if something happened to Nord Stream if Russia invaded Ukraine. But they were stronger than that:

There is no evidence that the Biden regime shut down Nordstream 2. pic.twitter.com/Ck5PoSEkcz

That doesn't look like a smoking gun... but they're not beanbag chairs. One could see how stopping Nord Stream would help the US. We didn't want Europe to get Nord Stream in the first place because it would make Europe too dependent on Russian gas. From an American point of view, this makes a lot of sense. But if Washington destroyed those pipelines in the middle of the war between Ukraine and Russia, it would be a crazy way to make the war worse by destroying important infrastructure. Think about it: if Russia can't send gas to Europe anyway because the pipelines are too damaged, that makes it harder to make peace and get energy back to Europe. This fits with what Washington wants to do. That doesn't mean that Washington is behind this sabotage, but there are a lot more reasons for Washington to have blown up the pipelines than for Russia.

Radek Sikorski, a well-known Polish politician, knew this and sent out this bad tweet as soon as the news came out: 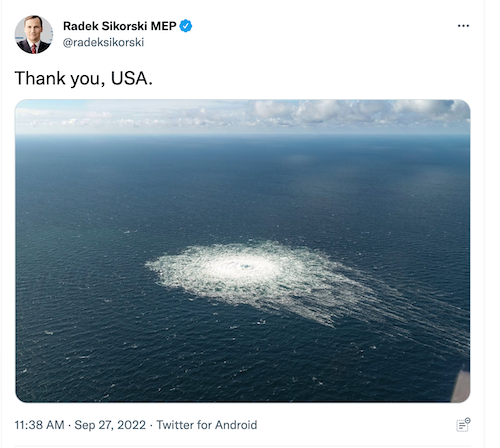 The Washington Post says Tucker Carlson's case is "shoddy," but if that's true, the Post's weak analysis doesn't back up the claim.

So far, no one knows who did this. I'd bet money that it was us if I had to. I can't believe that a well-known journalist like Tucker Carlson is bringing this up, but I'm glad he is. We're heading straight for a possible nuclear war with Russia, and it looks like Washington is almost as careless as Moscow.

UPDATE: Give it some thought: it will soon be winter in Europe. If people in Europe get tired of being cold and/or paying a lot to heat their homes, they may take to the streets to demand that their governments push for peace talks between Russia and Ukraine so that the flow of Russian gas can start up again. But now that the Nord Stream pipelines have been badly damaged, that chance is gone, isn't it?

More from: USAGAG
1
The cryptocurrency exchange Bitfront closes
2
FTX put your cryptocurrency in a 'crypt,' not a ...
3
The energy industry will not be fixed by subsidies
4
Twitter Is Too Musk to Fail
Filed under Nord Stream ,  Nord Stream Leaks ,  Tucker Carlson