America was in a condition of crisis in 1921. Warren Harding and Congress responded by halving federal spending.

Most notably, as illustrated by this chart based on OMB data, he presided over a period of remarkable spending discipline. 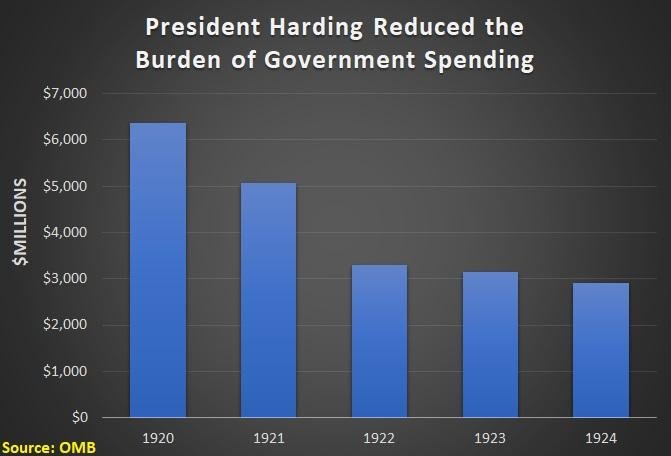 And his vision of less government and lower tax rates aided in bringing a severe economic downturn to a close (unlike the big-government policies of Hoover and Roosevelt, which deepened and lengthened the Great Depression).

In a moment of national crisis, Warren G. Harding restored the economic health of the United States. …America in 1921 was in a state of crisis, reeling from the worst recession in half a century, the most severe deflationary spiral on record… Unemployment, it is now estimated, stood somewhere between 8.7 and 11.7 percent as returning soldiers inflated the size of the working-age population.

Between 1919 and August of 1921 the Dow Jones average plummeted 47 percent. Harding’s response to this emergency was largely to let the cycle play out. …The recession ended in mid-year, and boom times followed. Harding and Congress cut federal spending nearly in half, from 6.5 percent of GDP to 3.5 percent. The top tax rate came down from 73 percent to 25, and the tax base broadened. Unemployment came down to an estimated 2 to 4 percent. …Harding was a smashing success in a historically important role as the anti-Wilson: He restored a classically liberal, rights-focused, limited government, and deserves immense credit for the economic boom that kicked off in his first year and continued throughout the rest of the 1920s.

Smith also credits Harding for undoing some of Woodrow Wilson's most heinous policies, such as racial discrimination and imprisoning political opponents (Wilson also had a terrible record on economic issues).

Let's take a look at some extracts from a new piece by Vance Ginn of the Texas Public Policy Foundation and John Hendrickson of the Iowans for Tax Relief Foundation.

President Harding assumed office in 1921 when the nation was suffering an overlooked severe economic depression. Hampering growth were high income tax rates and a large national debt after WWI.

…President Harding’s chief economic policy was to rein in spending, reduce tax rates, and pay down debt. Harding…understood that any meaningful cuts in taxes and debt couldn’t happen without reducing spending. …Not only was Harding successful in this first endeavor to reduce government expenditures, his efforts resulted in “over $1.5 billion less than actual expenditures for the year 1921.” …The decade had started in depression and by 1923 the national economy was booming with low unemployment.

By the way, while the $1.5 billion-plus cut from 1921 to 1922 may not seem like much, it represented a 30% reduction in the size of government (and this was back in the days when government was a relatively small burden).

That would imply a $1.5 trillion reduction in the federal budget for this fiscal year.

What a fantastic idea—possibly even better than my other libertarian ideal.

P.S. Harding's economic policies have been lauded by Thomas Sowell.

P.P.S. I also praised Bill Clinton's economic measures. To be more specific, I have complimented the initiatives adopted under his reign.

More from: USAGAG
1
There was no 'Attack' on Terra
2
Terra's revised recovery plan would reduce post-attack UST holders' ...
3
Using crypto as a form of currency to manage ...
4
Musk requests that the SEC investigate the amount of ...
Filed under Warren Harding ,  President of the United States ,  US President

Most Popular This Week
1
Understanding Russia's War: Aleksandr Dugin's Strange Philosophy
2
The truth about the myths that have been holding ...
3
What sets Bitcoin unique from other cryptocurrencies, and what ...
4
Elon Musk is not our rival
5
What exactly is Black Lives Matter?
6
Facial recognition should be regulated rather than banned
7
There was no 'Attack' on Terra
8
Terra's revised recovery plan would reduce post-attack UST holders' ...
9
How Today's Crises Are Rehashing the 1970s: Inflation, War, ...
10
If I wanted to keep poor people poor, I'd ...