A MSNBC panel wants the FBI to Investigate the father who told Biden, 'Let's Go Brandon.'

A caller to the NORAD Santa hotline got the opportunity to talk with President Joe Biden and First Lady Jill Biden on Christmas Eve, and he took advantage of the opportunity.

During the call, he persuaded the president to agree to the slogan "Let's Go Brandon," which has been substituted for a crude assault on Biden.

Many on MSNBC are now calling for a government inquiry into the caller, as if we live in a country where the president cannot be challenged.

“So, what you heard there, was an Oregon dad, his four kids,” host Nicolle Wallace said. “He’s a self-described free-thinking American a follower of Jesus Christ. He called into the NORAD tracking center on Christmas eve. What he said, ‘let’s go Brandon’ means ‘eff Joe Biden’ in very, very, very thinly coded right-wing lexicon.”

“That grown man, Jared Schmeck, later told the Oregonian that the comment was meant in jest before whining for days now about being attacked for utilizing his freedom of speech,” she said. “The story could have ended there, though, right? But he went on Steve Bannon’s broadcast today, podcast, whatever he has. There he was, Jared Schmeck, wearing his MAGA hat.”

“Tell us, does this sound like someone who was saying something in jest?” she said as she played a clip of what he said.

“Donald Trump is my president and still should be president right now,” the dad said. “The election was 100% stolen. So, I just want to make that clear. Let’s go Brandon is more than just ‘eff Joe Biden.’ Let’s go Brandon — it encompasses the entirety of our frustration with Joe Biden, the administration, the leftist mob, the cancel culture, the mainstream media. They are the ones who made this ‘a thing.’ And we are able, as conservatives, we are able to find humor in this. But there is terrible things going on.”

And after the clip, Wallace continued her whining.

“I don’t want where to start,” she said. “Let me tell you why this matters. The asymmetry has always been what advantages the Trump right more than anything else ask. The asymmetry of saying f*** you to a sitting president on a call in front of your four kids – don’t look past this. Don’t look at this as a story about giving air time to a MAGA guy who goes on Steve Bannon’s podcast and says I won’t joking. Not only did I say eff you, Mr. President, I said more than that. This is the slow-motion insurrection, Jason, in full color.” 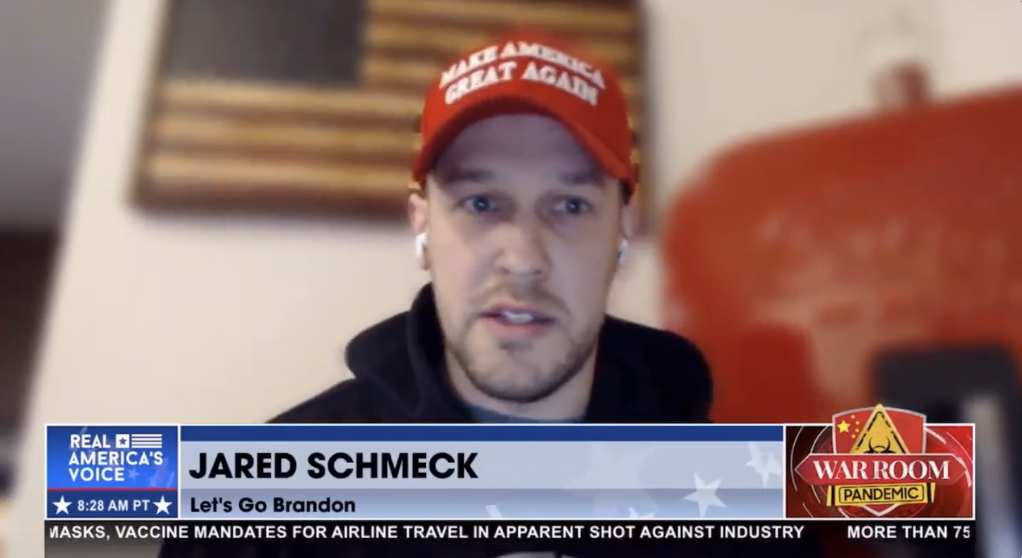 “Yeah, Nicolle,” author Jason Johnson said. “Here’s the thing. There is nothing more entertaining to me than people’s whose names I have never heard of four days ago saying ‘I am canceled’ as they are being amplified. Right? That’s the thing.”

“He wants to complain about cancel culture. Dude, I didn’t know who this Schmeck schmuck was,” he said. “I didn’t know who this guy was five days ago. Right? Now I know who he is  but ‘he is being canceled.’ He is going to have T-shirts and turn up on Turning Point next week giving speeches with Kyle Rittenhouse. That’s the hypocrisy of it all.”

“But the more dangerous thing you are pointing to is the fact that all of these people are basically just insurrectionists in training now,” he said.

“But when these people are speaking, they are not joking,” he said. “MAGA isn’t about taxes. You know. ‘Let’s go Brandon’ isn’t about what you feel about supply chain issues and gas. It is the cry of insurrectionists. It is the cry of people who want to violently take over this country and oppress anyone who is not like them. And that’s what makes this dangerous.”

This is insane. The man has not shown any signs that he is an insurrectionist or wants to cause harm to anyone, but the author got even more unhinged.

“And to the degree that Joe Biden can laugh it off or anything else like that, that’s fine,” he said. “But I hope we have a Justice Department and an FBI and a CIA that investigates where the anger that leads to these kinds of statements comes through. Because these people already attacked us with guns. Do you think they are going to come back with something less aggressive next time if they feel like they can speak this way to the president? I don’t think so.”

He wants the FBI and the Department of Justice to look into a man who pranked Joe Biden, and he believes MAGA supporters are mad.

More from: USAGAG
1
Facebook's doomed cryptocurrency effort is almost certainly coming to ...
2
Defending Taiwan is an admirable objective. But are we ...
3
Is China intending to poison international competitors during the ...
4
China secretly purchased a stake in an Italian drone ...
Filed under Let's Go Brandon ,  Biden ,  FBI ,  Jared Schmeck