Turkey's Liberation and Its Bread

Turkey has arrived to this sorry state as a result of reasonable anxiety and unforgivable tyranny.

The Human Freedom Index 2021 just came out. It shows a concerning decline in freedom in countries where 83 percent of the global population lives. There are five nations among them whose trajectories during the last 10 years have been the worst of them. Syria, Venezuela, Nicaragua, Bahrain, and Turkey, my own country, are among them. 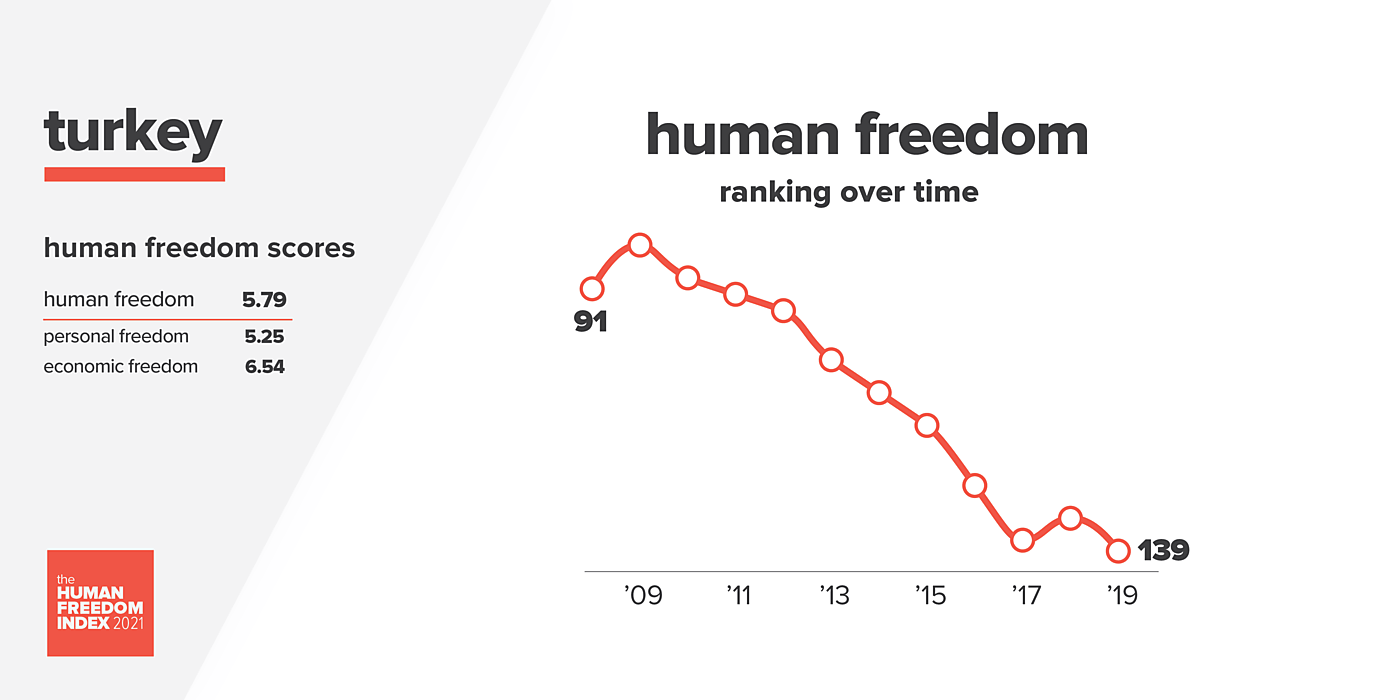 Turkey's catastrophic slide is seen in the graph above, which was drawn from the Human Freedom Index: in 2009, Turkey was rated 83rd on the index. It fell to 139th rank in ten years. It's a spectacularly steep descent.

What caused this to happen? How did Turkey lose its independence so quickly?

The explanation has a lot to do with President Tayyip Erdogan, the head of the Justice and Development Party, who has increasingly run Turkey on his own in the last decade (AKP.) But there's also something strange about it. Since 2002, Erdogan and the AKP have been in power. This suggests that they weren't doing too terribly in their early years. In reality, from 2008 to 2009, the graph above indicates an upward trend. (Other measures of global freedom that go earlier than 2008, such as by Freedom House, also shows a slight uphill trend in Turkey in the early 2000s, and then at least no decline until 2010.)As a result, it appears that Turkey's loss in freedom did not begin with the AKP's election victory in 2002. After 2010, it began in the second phase of the AKP's government. What happened to cause that?

The solution is complicated, but here's a summary: The AKP sprang from Turkey's Islamist movement, which had an undeniably authoritarian philosophy. However, after a "soft coup" by the hyper-secularist military in the early 2000s, several of these lifelong Islamists claimed to have transformed. They were now "conservative democrats," ready to bring Turkey into the European Union and even right the wrongs of the previous secular regime. Furthermore, in their early years in office, they really followed this path, enacting liberal reforms, increasing the economy, obtaining the support of many Turkish liberals (including myself), and even achieving global recognition as "the Turkish model."

However, in the early 2010s, the AKP's triumph and the power that came with it triggered a change. They were no longer strangers to the state, seeking to right previous wrongs. They had become the state, creating their own injustices. So, as I put in a 2013 piece, the AKP began to confirm the cyclical view of history proposed by the medieval Muslim scholar Ibn Khaldun, where conquerors soon turn into what they conquered.

It also became clear that the AKP’s ideological transformation was not genuine. As I put in a 2016 piece in the New York Times, “Whatever Happened to the ‘Turkish Model’?”

The AKP adopted a liberal discourse out of mere necessity, without giving it much thought or going through a real ideological transformation. Once the party grabbed power, its members were tempted, intoxicated and corrupted by it. The cadres and classes that now rally behind Mr. Erdogan have found wealth, prestige and glory for the first time in their lives. They seem determined not to lose them — regardless of what that means for Turkish democracy.

To be fair, some principled members of the party stayed committed to the original vision. They were, however, forced out one by one and even labeled "traitors." (Ahmet Davutoglu and Ali Babacan, two of them, currently lead tiny opposition groups.) Former President Abdullah Gul, for example, is discreetly but definitely on the opposition's side.)

While these saner people were pushed out, the AKP turned into a cult of personality: Erdoganism. As a result, Erdogan was the rescuer Turkey had been waiting for for a century. He was restoring Turkey to its former glory as a great, Muslim, and "independent" country, which is why he was the subject of innumerable conspiracies concocted by worldwide cabals. These foreign foes of Turkey also mastered domestic resistance to Erdogan. As a result, opposing Erdogan was treasonous to the country.

This authoritarian narrative first arose in 2013, in a democratic and rather liberal political system. However, the system began to disintegrate from inside. By 2015, the trend had become unnervingly clear, as I put in a New York Times piece on “Turkey’s Authoritarian Drift”:

Mr. Erdogan could simply keep accumulating power, leading to a system with an all‐​powerful Russian‐​style presidency without checks and balances… If recent trends continue, more critical newspapers and TV channels could be crushed or taken over by government sympathizers, turning all Turkish media into different versions of the same Pravda. The judiciary could become a mere handmaiden to the government, and even universities, which are all tied to the recently strengthened “Higher Board of Education,” could be disciplined by the state. Turkey could easily become a tyranny of the majority, embodied in the rule of an all‐​powerful man.

That is precisely what has occurred since then. Ironically, Erdogan was aided in this by the plotters of the failed July 2016 coup attempt. It was a real, serious, and bloody attempt — and an illegitimate one, too, as I put it then. Yet, inadvertently, it gave Erdogan the pretext to enact a regime of permanent emergency, with unlimited power to purge any institution and to punish any vocal critic.

To get a sense of these punishments, just look at Turkey’s legal cases on “insulting the President” — a “crime” with prison sentences up six years. Since 2014, the year Erdogan became president, a staggering number of 160,169 investigations were launched over insulting the president, 35,507 cases were filed, and 12,881 people were convicted. Some people shared cartoons of Erdogan on social media, soon to have police at their door, and to be locked up for months. Other people “insulted the president” during a chat on a public bus, only to be arrested at the next bus stop.

In this “one‐​man regime,” as Turkish dissidents call it, the President, intoxicated with absolute power and surrounded by incompetent sycophants, also found the chance to test his eccentric ideas on the whole nation. The most fateful of these was “Erdoganomics,” a pseudoscience that ruined the Turkish economy, as the President’s ideological obsession with interest rates led to the collapse of the national currency, soaring inflation, price controls, and ultimately shortages.

As I was writing these lines, the economic scene was getting grimmer, with breadlines appearing in poorer neighbors. The New York Times reported from one of those spots, noting “many Turks can’t afford bread, and bakers can’t afford to make it.” The reporter also observed:

Most people did not want to be interviewed for fear of getting into trouble for criticizing the government of President Recep Tayyip Erdogan, which frequently detains his critics. Those who spoke declined to give their names.

Turkey has arrived to this sorry state as a result of reasonable anxiety and unforgivable tyranny. As the Human Freedom Index 2021 reveals, the country has steadily lost much of its freedom over the last 10 years. As a result, it is suddenly losing a significant portion of its riches – and even its bread.

More from: Mustafa Akyol
1
Turkey's Liberation and Its Bread
Filed under Turkey ,  erdogan