'I observe cancel culture on a daily basis.'

Cancel culture feeds on apologies. The only way to stop it is to resist it, and Chris Harrison failed

Poland's government is standing up, speaking out, and fighting back against extreme-Left Big Tech and Cancel Culture

Despite their unique fights with 'cancel culture,' Louis C.K. and Dave Chappelle both received Grammy nominations, indicating that 'canceling' individuals may be on the decline. 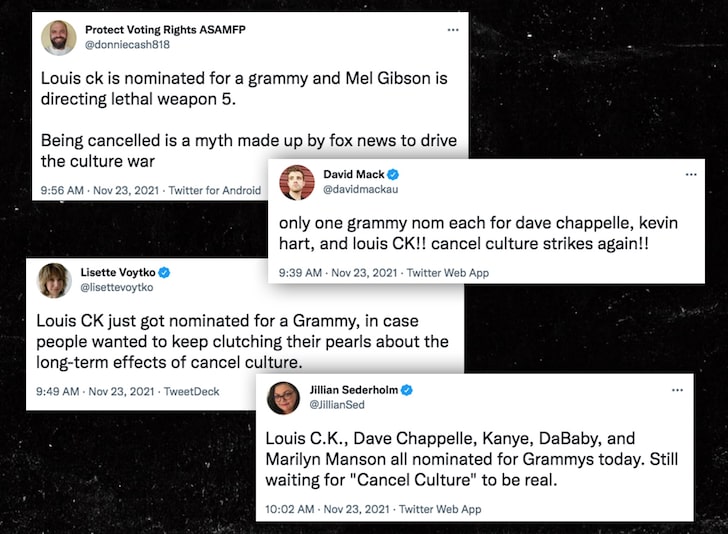 "Louis CK just got nominated for a Grammy," one user said, "in case folks wanted to clutch their pearls over the long-term ramifications of cancel culture." Another person stated, "Dave Chappelle, Kevin Hart, and Louis CK each received one grammy nomination!! The cancel culture has struck once more!!"

As we previously noted, Dave has recently sparked controversy, particularly among members of the LGBTQ+ community, when his most recent Netflix special, "The Closer," focused almost completely on transgender and homosexual people.

Clearly, The Academy has moved on from the incident, and its members believed that the performance of both comedians merited consideration for one of the industry's highest prizes.

More from: USAGAG
1
After Hunter's laptop, Joe Biden's daughter reportedly keeps a ...
2
Why the billions in fraud were caused by the ...
3
Roe always looked like a house of cards
4
After ‘life-altering surgery’ Ozzy Osbourne releases a creepy new ...
Filed under Cancel Culture ,  Dave Chappelle ,  Oscar