If Congress restrains its spending appetite, this is good news as it will reduce the government’s dangerously high budget deficits.

New data from the Congressional Budget Office show that federal tax revenues are soaring. Despite the Republican tax cuts of 2017 and the ongoing pandemic, taxes are pouring into the U.S. Treasury. If Congress restrains its spending appetite, this is good news as it will reduce the government’s dangerously high budget deficits.

The chart below shows the major sources of federal revenues from fiscal 2000 to fiscal 2021, which ended September 30. The GOP tax cuts were effective January 2018, which was part way through fiscal 2018.

Congress should use the current revenue gusher to reduce dangerously high deficits and debt. Government debt in the United States at 141 percent of gross domestic product is above the average of other high‐​income countries, and it is well into the danger zone above 100 percent of GDP where it appears to reduce economic growth.

The government is currently enjoying a revenue bounty, but Congress should not squander it on new spending. Instead, policymakers should encourage growth by reducing regulations, and they should use rising revenues to reduce perilously high deficits and debt. 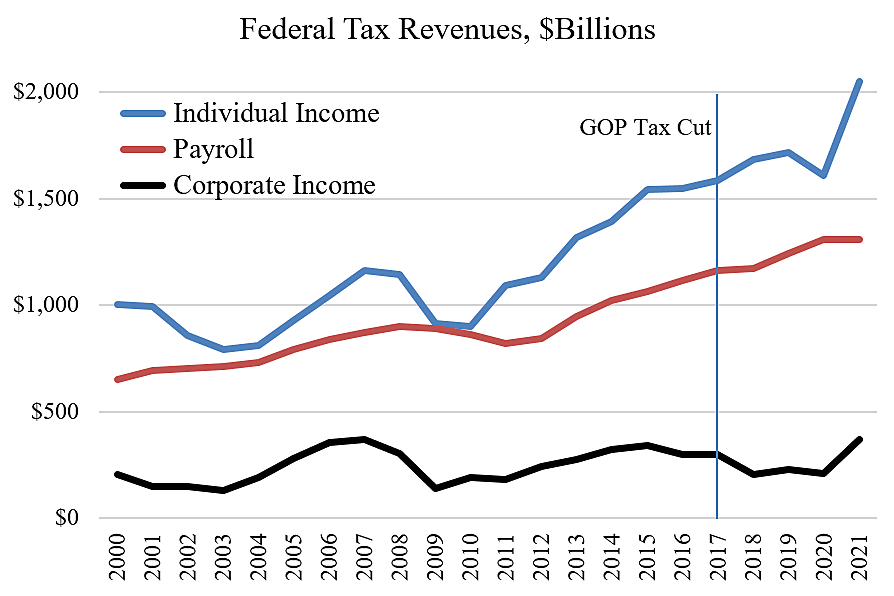 More from: Chris Edwards
1
When it comes to the IRS, bigger isn't always ...
2
Rich People's Tax Rates
3
Congress should use the current tax revenue gusher to ...
4
President Biden’s new minimum wage proposal is a bad ...
Filed under

Most Popular This Week
1
The Most Terrifying Inflation Chart Ever
2
For teachers and for students, one size doesn’t fit ...
3
China opens its doors to global banking firms, but ...
4
George Floyd's more than a decade-old criminal history
5
On the 400th Anniversary of the First (and Most ...
6
Some Economic Rights-Related Good News from the Courtrooms
7
Thanksgiving Isn't About 'Genocide And Violence' No, Thanksgiving Isn't ...
8
Thanksgiving Prices Have Increased—But There Are Better Options Than ...
9
At the border, Joe Biden kneels in front of ...
10
Thanksgiving Is As Much For The Good Times As ...