Was ‘Oumuamua a rock or an alien scout? Harvard astronomer talks controversial hypothesis in new book

Ari Loeb, who suggested in 2018 that the mysterious object was an alien craft, is back to discuss the evidence.

If we became especially interested in another solar system and wanted to send an exploratory craft, how would we do it? Even the nearest solar system—Proxima Centauri is its sun—is about 40,208,000,000,000 kilometers from here, so there's no way our scout could carry enough fuel to get there. Might we could use something like a light, or solar, sail? Light-sail craft already exist, and they do work.

Harvard University astronomer Avi Loeb made headlines in 2018 when he suggested that the extra-solar object 'Oumuamua—which, after all, does mean "scout" in Hawaiian—was just such a craft sent to have a look at our solar system. Since then, if anything he's become even more convinced, and Loeb has just published his reasoning and other thoughts in a new book, "Extraterrestrial: The First Sign of Intelligent Life beyond Earth."

But it's a rock 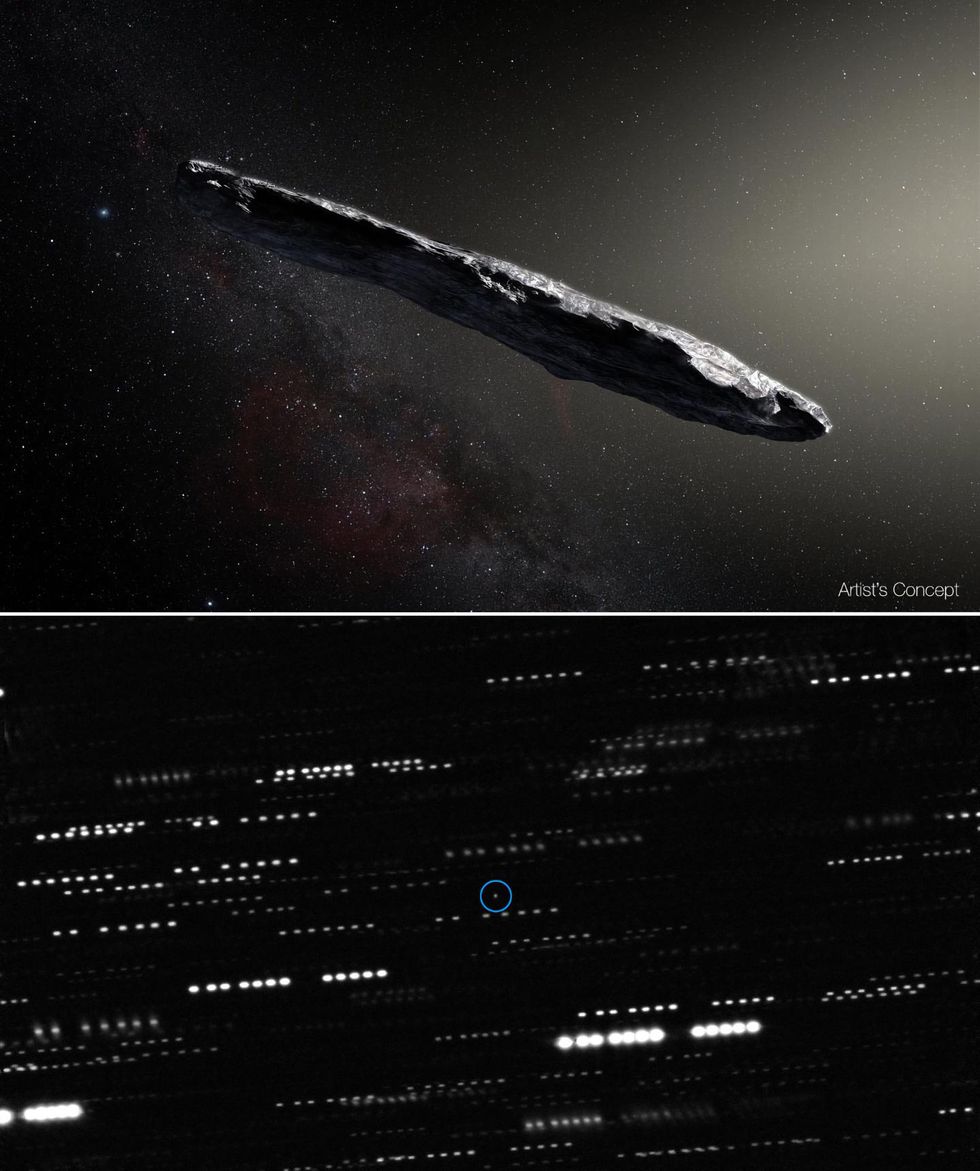 The visual image that comes to mind in thinking about 'Oumuamua is the artist's rendition (above top) that was released by the European Southern Observatory when the object was discovered on its way out of our solar system in 2017. Listening to Loeb's claims, one may think, "What light sail? It's a rock."

However, it's all too easy to forget that this ubiquitous image is just an artists' rendition after all, based on the assumption that our visitor was a rock. It need not have looked like this at all. We have no idea what 'Oumuamua really looked like, since the image at the bottom shows the best look at the object we really got.

What is a light sail? 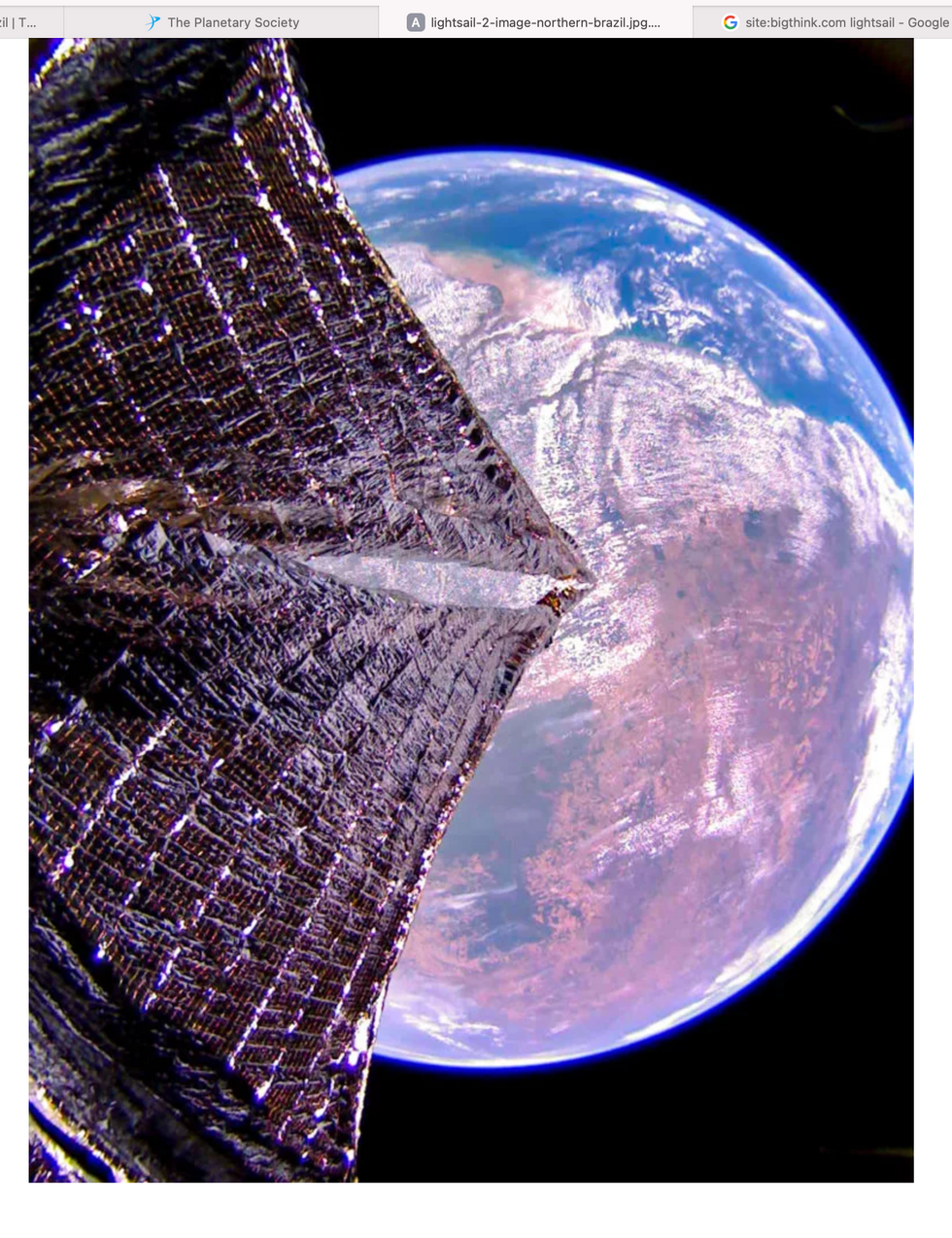 A light sail is a spacecraft constructed from panels of a lightweight, reflective material such as Mylar or polyimide treated with a metallic reflective coating. When photons from a star, such as our Sun, hit the sail, they give it a small push. When the photons bounce back off of the sail, they give it another one. It doesn't take much of a shove to move a light sail through a vacuum of space, and it's believed light sails can pick up quite a lot of speed as they go. Loeb himself is involved in the Breakthrough Starshot project that envisions light-sail craft shooting through space at 100 million miles an hour.

The first functioning light sail, LightSail Sail 2 was sent aloft by the Planetary Society in June 2019, and is currently orbiting the Earth. This year, NASA plans to deploy the NEA Scout mission that will send an 86-square-meter light sail off from Moon orbit to explore the near-Earth asteroid Itokawa.

To Loeb, the object's apparent appearance and behavior doesn't suggest a rock.

First off, what appears to be 'Oumuamua's shape—described as being about 100 meters long and resembling either a cigar or pancake—doesn't describe previously seen comets or asteroids. Second, 'Oumuamua was also exceptionally bright, 10 times moreso than space rocks typically seen whizzing around our solar system. This high level of reflectivity would consistent with a shiny, metallic surface.

Finally, 'Oumuamua accelerated as it whipped around the sun as if it was picking up energy from the star. While such behavior is common when comets speed up, pushed forward by evaporating gasses from the sun's warm, no such gases were observed with 'Oumuamua.

With all this in mind, Loeb, along with co-author Shmuel Bialy, published a controversial paper in Fall of 2018 in the Astrophysical Journal Letters hypothesizing the object might be an extraterrestrial craft. The paper suggested that maybe "'Oumuamua is a lightsail, floating in interstellar space," perhaps "debris from advanced technological equipment." It also posited an admittedly more "exotic" possibility, "that 'Oumuamua may be a fully operational probe sent intentionally to Earth vicinity by an alien civilization."

Needless to say, the paper was met with a great deal of excitement. Did 'Oumuamua signify the presence of intelligent life beyond our solar system, or—as many scientists felt—was such conjecture unworthy of serious consideration?

As the title of his new book implies, Loeb continues to assert the validity of his earlier analysis, demanding that the scientific community at least consider the possibility that 'Oumuamua was an exploratory craft.

One of the underlying themes of the book is Loeb's concern about the "health" of a scientific community that can't even entertain a hypothesis such as his and Bialy's. (This month, Scientific American published an extended and thought-provoking interview with Loeb.) In the book and interview, Loeb attributes his notoriety to an overreaction by the scientific community to his 2018 paper. While much of the book is autobiographical, Loeb claims he isn't interested in his own fame, and he recently stepped down from Harvard's Astronomy department.

"My message is that something is wrong with the scientific community today in terms of its health," Loeb told Scientific American, adding that too many in the science community are motivated by ego and self-image, when science should be about taking risks and trying to understand the world.

"People ask why I get this media attention. The only reason is because my colleagues are not using common sense," Loeb said. "Contrast string theory and multiverses with what I and many others say, which is that based on the data from NASA's Kepler mission, roughly half of the galaxy's sunlike stars have a planet about the size of the Earth, at about the same distance of the Earth from the sun, so that you can have liquid water on the surface and the chemistry of life as we know it. So if you roll the dice on life billions of times in the Milky Way, what is the chance that we are alone?"