Scientists discover burrows of giant predator worms that lived on the seafloor 20 million years ago.

If you happened to be traversing the seafloor of Eurasia about 20 million years ago, you'd likely come across giant predator worms as long as several meters, claims new research. Scientists discovered that super-long worms may have taken over the ancient seafloor, based on their reconstructions of large burrows found at the bottom of the sea in northeast Taiwan.

The samples studied came from as far back as the Miocene epoch of 23 million to 5.3 million years ago. The research team used 319 specimens found in the sandstone of Yehliu Geopark, an area outside New Taipei City in Taiwan, to reconstruct a trace fossil dubbed Pennichnus formosae. Trace fossils are geological features such as burrows that can be used to make educated inferences about how ancient creatures behaved. The fossil uncovered by the researchers is comprised of an L-shaped burrow about 2 meters in length but only 2-3 centimeters in diameter. The scientists concluded that this fossil was probably left by gigantic sea worms, possibly the ancestors of the bobbit worm (Eunice aphroditois), which is still around today.

The way a bobbit worm catches its food is by first hiding in a long burrow in the seafloor, then lunging up to catch its "unsuspecting prey with a snap of their powerful jaws," as the study authors write. The researchers believe the structure they found was created when the ancient worm retreated into the seafloor with its prey, still alive and struggling.

Ludvig Löwemark, a National Taiwan University paleontologist and the study's co-author, explained in an interview with Wired that the fossil they found shows invertebrates like the ancient worms were eating vertebrates.

"Typically, what we find in the sedimentary record is animals that are moving through the sediment," said Löwemark. "But this is a record of a much more active behavior. The worms were actually hiding in the sediment, jumping out, catching their prey, and then dragging this prey down into the sediment." 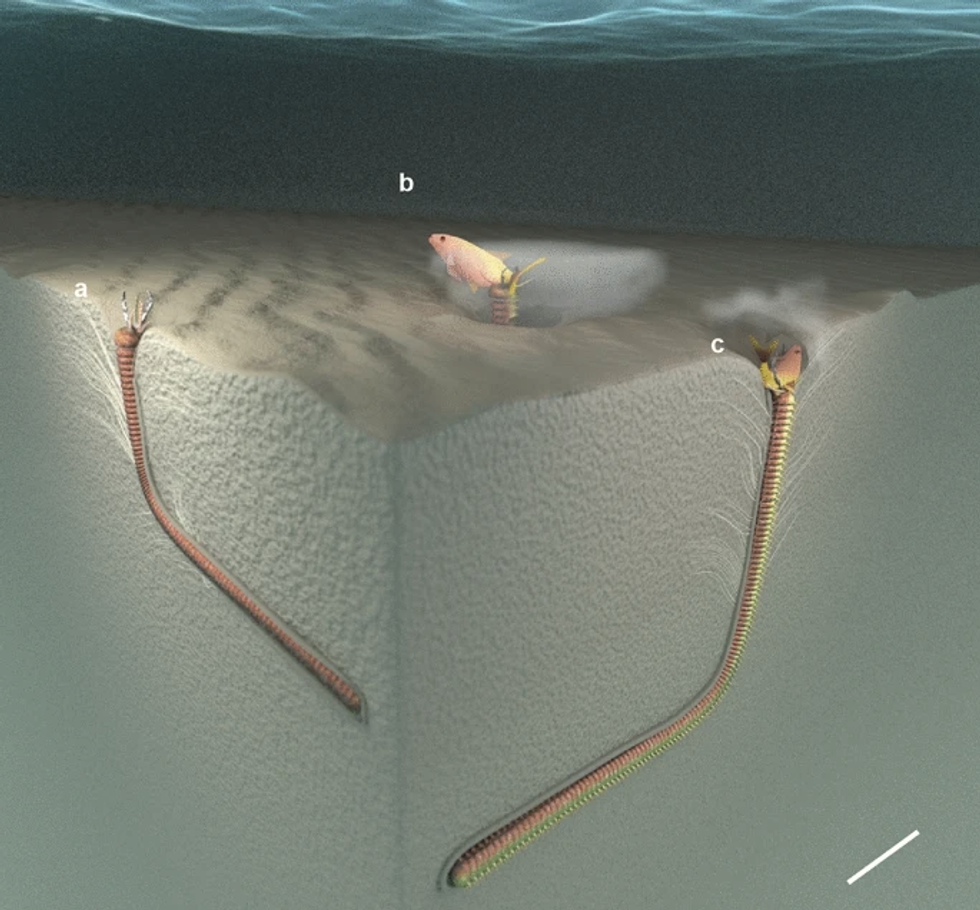 A three-dimensional model of the feeding behavior of Bobbit worms and the proposed formation of Pennichnus formosae.

What's also remarkable about the study is that studying ancient worms is generally an extremely difficult task. One big problem – they would have had bodies composed mainly of soft tissue, which is hard to preserve. The trace fossil discovered by the scientists is likely the first known fossil made by an ambushing predator of this kind.

If you're wondering, the bobbit worm's unusual name comes from a sordid episode of American culture, referencing the story of John and Lorena Bobbitt, who cut off her husband's penis after years of abuse.

Check out the study published in the journal Scientific Reports.