A strange object found in Utah desert has prompted worldwide speculation about its origins.

An enigmatic "monolith" found in a Utah desert on November 18th has become the source of worldwide attention and speculation, with Internet denizens looking for something more light-hearted to talk about as the tumultuous 2020 draws to a close.

The unusual object was discovered by a helicopter of the Utah Department of Public Safety department which was helping the Department of Wildlife Resources to count bighorn sheep in a remote southern part of the state. As the crew passed by the object, a biologist noticed what they described as something "out of this world". Upon landing amidst red rock cliffs and getting a closer look, they found a shiny object, between 10 and 12 feet high, that was eerily similar to the monolith in the film director Stanley Kubrick's seminal sci-fi masterpiece "2001: Space Odyssey".

Given the cinematic history and the location of the object, here are top 5 theories on what it could be:

Chances are, this is an art object. The shiny "monolith" appears to be bolted to the ground and made of metal. It also seems to be fastened with rivets, rather being a uniform block of more unexplainable production origin. Deserts are great places for unusual art installations as has been evidenced by art projects you can discover wondering through the desert ghost towns and faraway canyons of Nevada, California, Utah and New Mexico. Certainly, an artist with a sense of humor and an appreciation of Kubrick's genius could have installed such "sculpture" in hopes of exactly what is happening right now – viral fame.

On the other hand, there is evidence, courtesy of eagle-eyed Google Earth sleuths, that the object appeared in that location (somewhere near Canyonlands National Park) in 2015-2016. So it's possibly been there for a few years. Would an artist have placed it there so long ago with the aim of having this type of success eventually?

A gallery owner claimed the work may be a tribute to the art of the late artist John McCracken, who created similar-looking objects before he died in 2011. McCracken was part of the Light and Space movement with such artists as James Turrell, and was known to make his sculptures from plywood forms that were coated with fiberglass and polyester resin.

While the theory that the monolith was the work of a McCracken aficionado (or the artist himself) may hold some water due to the object's similarity, the fact that the artist died so long ago and the lack of clear incentive for anyone to have planted this years ago only to reveal it now work against this theory. 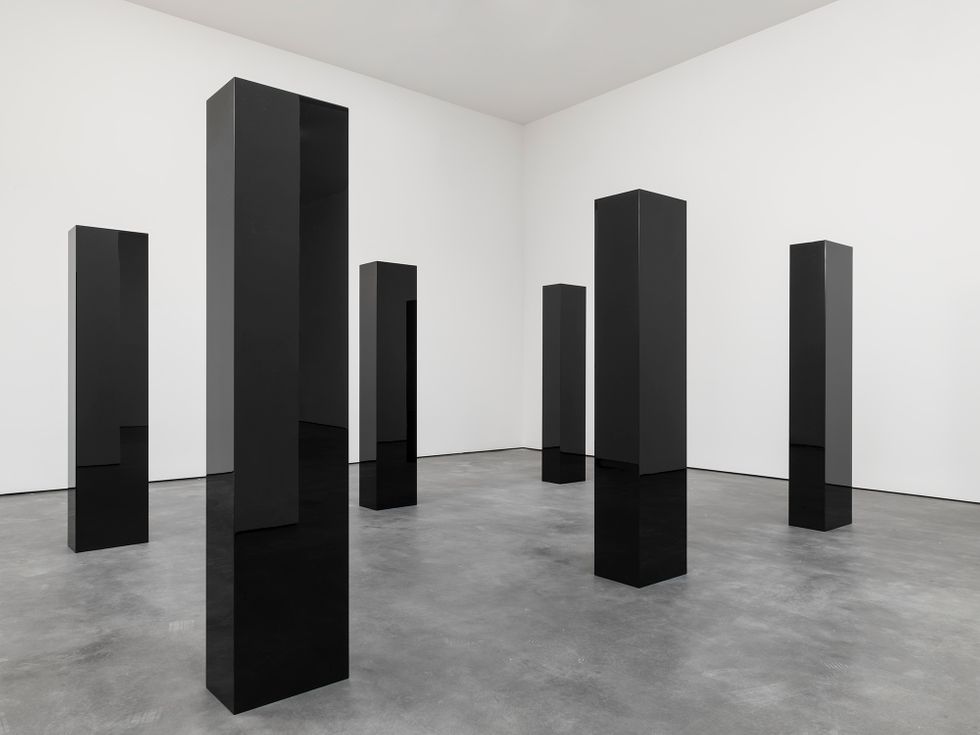 Certainly, explaining the monolith as an art installation may make the most sense at this point but its resemblance to the famous object from Kubrick's epic "2001: A Space Odyssey" can't help but bring some science-fiction scenarios to our minds.

In the film, the perfect black slab was discovered by a group of prehistoric apes. After finding the slab, the apes seemed to have developed the ability to utilize found objects like bones as tools and weapons. The film suggests that finding the monolith had an evolutionary impact on the apes, perhaps serving as "the missing link" that propelled humans from being lower-end primates to the intellectual powerhouses they are today.

Later in the film, after fast-forwarding thousands of years into the future, such an object is discovered on the moon by human astronauts. Using the writer Arthur C. Clarke's short story "The Sentinel" as its inspiration, the film's narrative suggests that alien civilizations are responsible for these objects which potentially serve as beacons that may still be transmitting signals back to whoever created them while possibly being responsible for fostering evolution throughout the Universe.

Could the Utah object be serving just such a function? While 2020 has offered very inconsistent evidence of human intelligence, a device from a benevolent alien race that can make us all smarter might be just what we need.

Or it could portend the exact opposite and be the one thing that will hasten our demise.

Besides having some specific impact on the inhabitants of planet Earth, the monolith could "just" be an extraterrestrial probe, sent here to learn about our ways. Would placing it in the middle of Utah desert be the best place to probe humanity? If the object was part of many such probes being sent all over the cosmos, it's possible the advanced alien overlord wannabes may not know specifically we are here and are just sending these everywhere they can. It's similar to when humans send probes to places like Mars and assume there's no life there just because the rover landed in the middle of a desert.

Stanley Kubrick (1928-1999) was one of the greatest film directors of all time, leaving behind a slate of films that are each considered a masterpiece – "Dr. Strangelove," "The Shining," "2001: A Space Odyssey," "A Clockwork Orange," "Spartacus," "Full Metal Jacket" and more.

The visionary American director left a profound legacy, garnering millions of fans around the world. As the monolith he devised for "2001: A Space Odyssey" is one of the most famous objects in movie history, it's not out of the question that one of the director's followers decided to recreate it.

The American Southwest is rife with government military installations and mysterious bases like Area 51. Having the monolith be a part of some government (vast psychological?) experiment is a connection that's easy to make for any conspiracy-minded Internet dweller.

Of course, given the government's penchant for both secrecy and ineptitude, this last one may be the hardest to ever prove definitively. In any case, the Department of Public Safety is not releasing the exact location of the object and warns people against trying to find it:

"It is in a very remote area and if individuals were to attempt to visit the area, there is a significant possibility they may become stranded and require rescue," DPS said.