Nicaragua is the most triangular country in the world

Underperforming, U.S. comes in only 157th out of 196 in global triangularity ranking 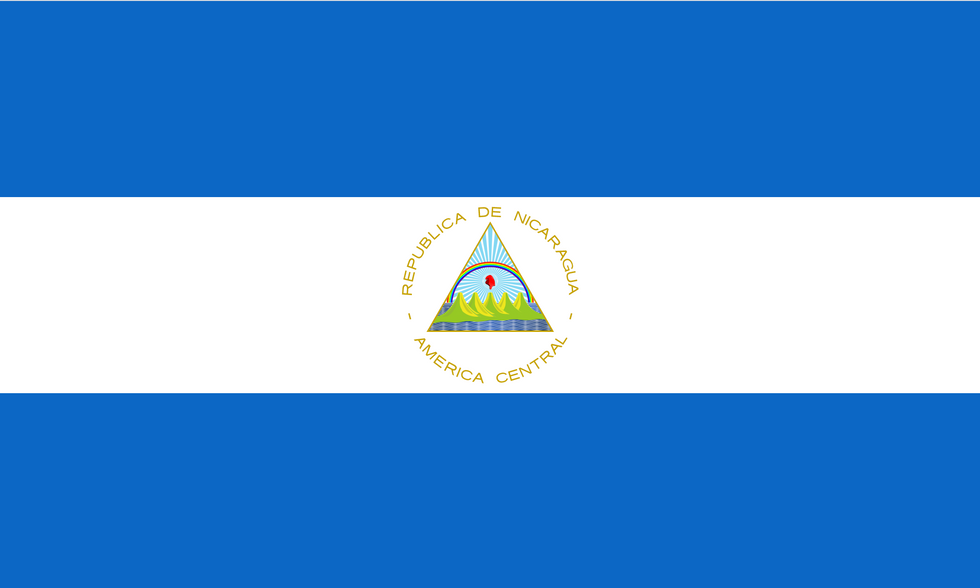 The flag of Nicaragua. Coincidentally or not, it features a... triangle.

So you like triangles. And you know how to hold a tune. Then, like Alt-J, you could write a song about how "triangles are (your) favorite shape". But what if you're left-brained rather than right-brained, and prefer maps and maths over notes and lyrics?

We feel we've hit upon a pretty good description of Tom Alps. With a name like that, he can't not be geographically inclined. And for proof that he knows his numbers and likes his triangles, look no further than the latest entry on Tom's Data Blog, titled What is the Most Triangular Country?

It's not the first question that we'd expect to see flowering in that weird and wild frontier zone between abstract mathematics and applied geography. Nor the second one. No, those would be, respectively: What is the Roundest Country? And What is the Squarest Country?

If we'd had to take a guess, the answers to those two would be: Lesotho, and Turkey. Turns out we were wrong on both accounts – because those questions have already been answered. As we discussed some time ago, Sierra Leone is the roundest country in the world, and Egypt is the squarest one (see #926). And, weirdly, the Vatican is both the world's fourth roundest and second most rectangular country. 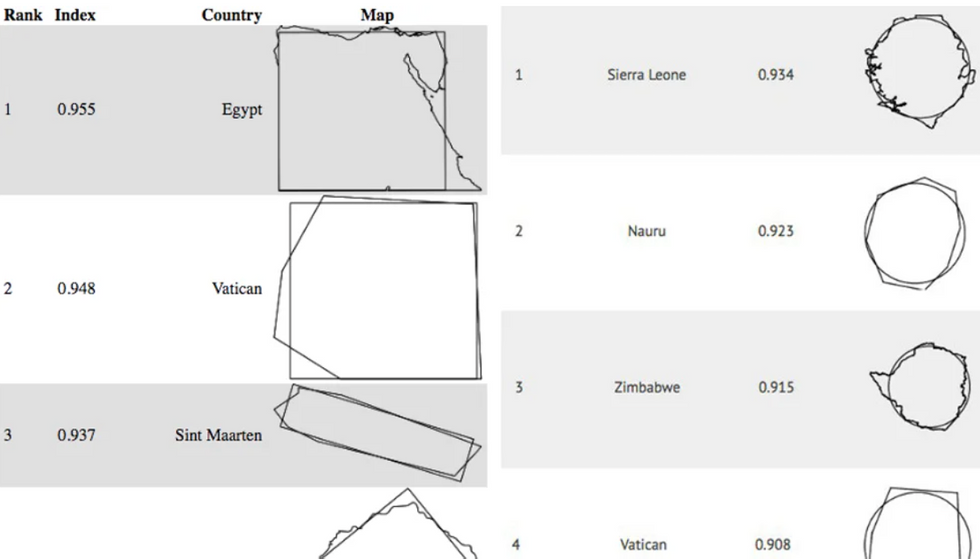 As it turns out, Lesotho is only the 36th roundest out of a total of 206 countries and territories, and Turkey only the 15th boxiest. So we were off by quite a bit. But ask us which is the most triangular nation on earth, and we can't even picture a likely candidate.

This is where Mr Alps's mathematical skills kick in. Inspired as he was by the pioneering work by Gonzalo Ciruelos (on sovereign circularity) and David Barry (on state-based squareness), he decided to test the world's countries and territories for their conformity to the third-most-basic geometrical shape.

As he writes on his blog, "the first step is to define mathematically what 'triangularity' means." For the full methodology, check Mr Alps's blog. And let's skip to the juicy bits. Out of the 196 countries listed in the Encyclopaedia Britannica, the most triangular country is...

And yes, now that you mention it – we see it too. 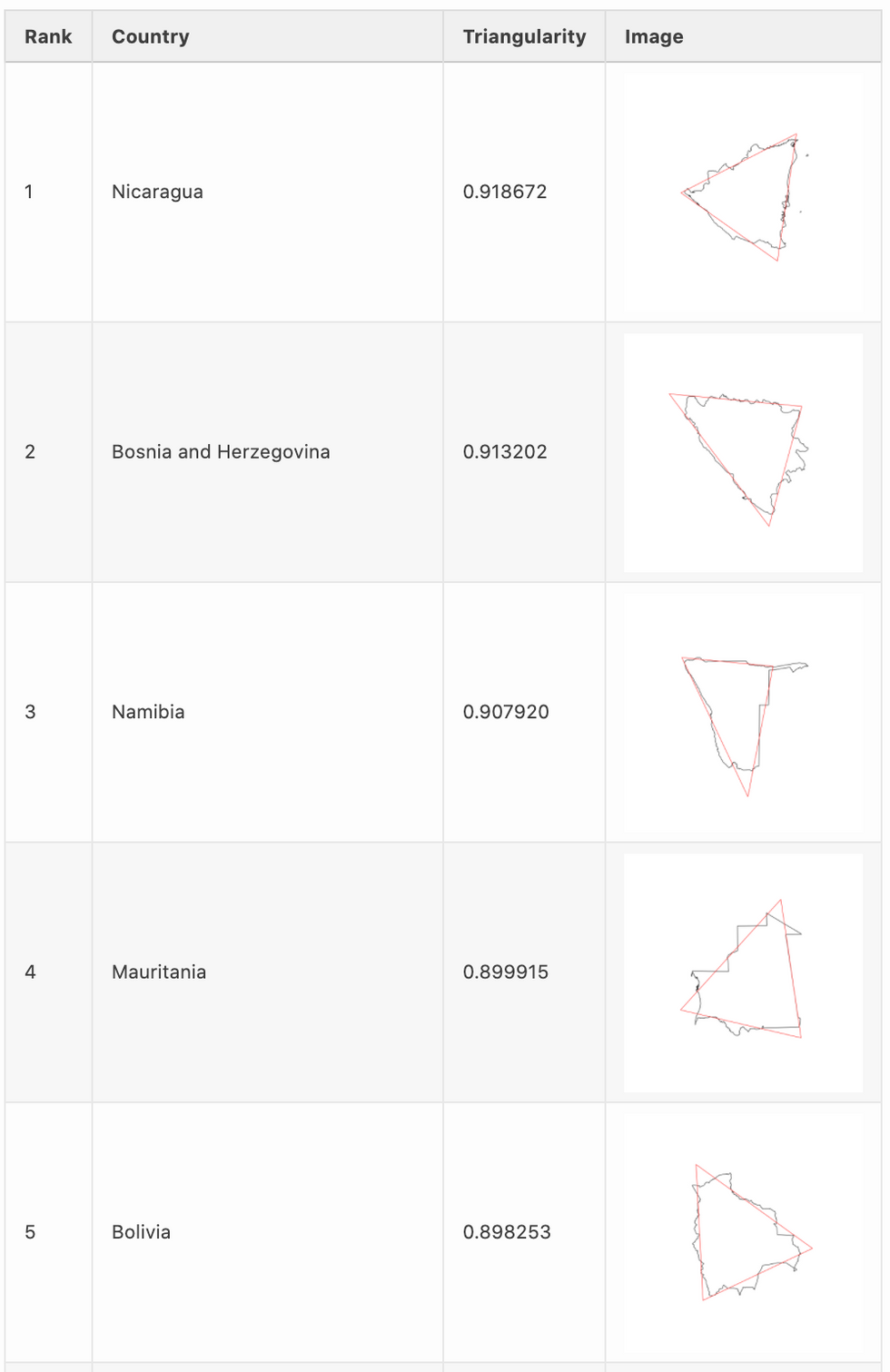 The five most triangular countries in the world: Nicaragua, Bosnia, Namibia, Mauritania and Bolivia.

On the 'triangularity' index devised by Mr Alps, which indicates maximum similarity between a country and a triangle, the Central American nation scores 0.918672. That is slightly better than the runner-up, Bosnia-Herzegovina. Although now that you mention it, yeah, that is a very triangular-looking country too.

Mr Alps plotted the triangularity of each country. "This shows that there is a quite gentle decrease in triangularity over the first 150 countries, followed by a sharp drop-off, seemingly due to countries that have multiple parts."

The least triangular country? The Marshall Islands. "Hardly surprising, considering the country is a collection of tiny islands spread over a large area of ocean."

For the least triangular country that isn't a group of islands, we have to move up 16 places in the ranking, to Vietnam at #180. The United States, by the way, is also among the world's poorest performers when it comes to triangularity, stuck in 157th place between Laos and Mexico.

How well is your country performing in the global triangularity ranking? Check it here on Mr Alps's blog. 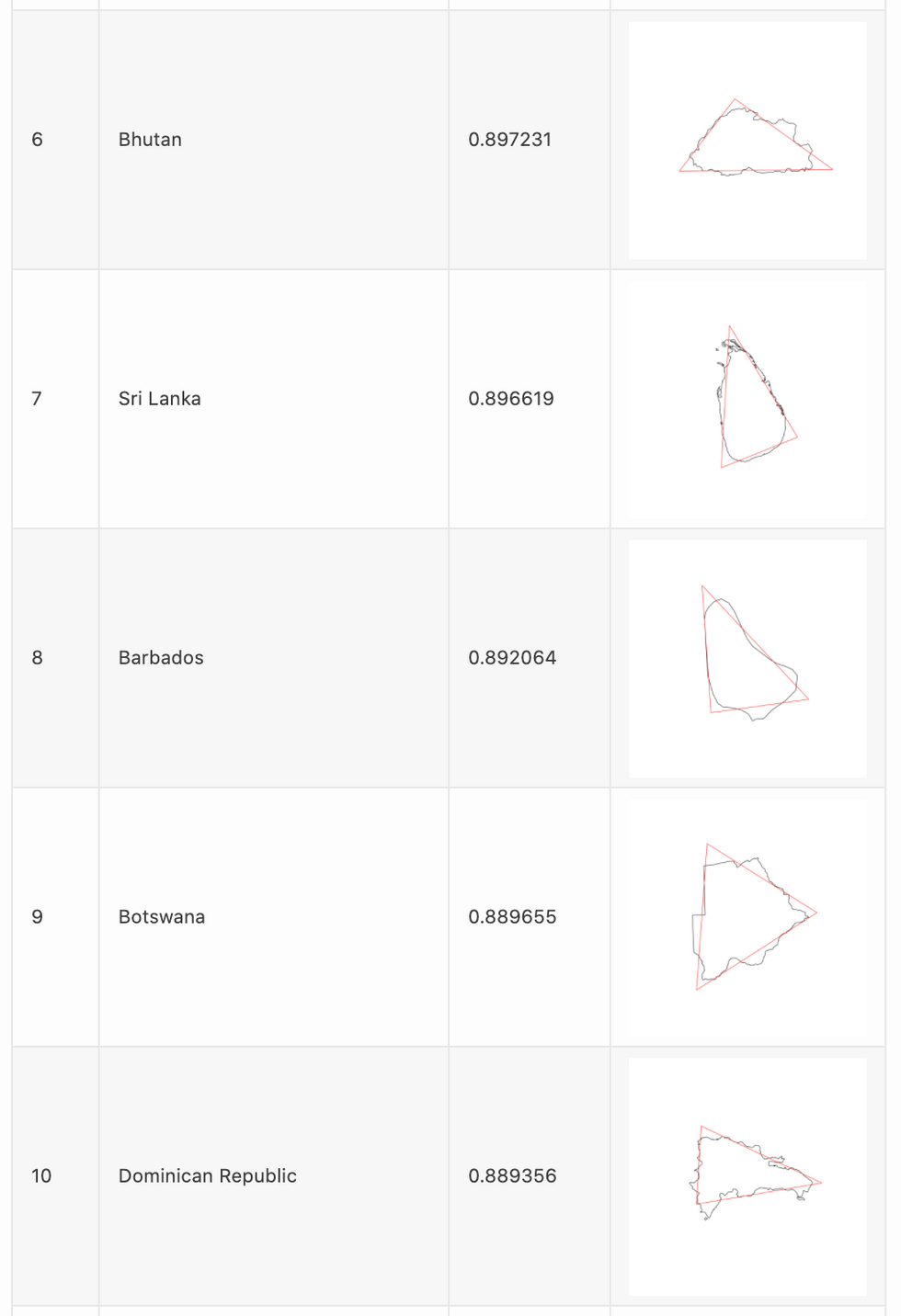 And rounding out the Triangularity Top 10: Bhutan, Sri Lanka, Barbados, Botswana and the Dominican Republic.

Got a strange map? Let me know at strangemaps@gmail.com.