The universe works like a huge human brain, discover scientists

A new study found similarities between the human brain and the cosmic network of galaxies.

Scientists found similarities in the workings of two systems completely different in scale – the network of neuronal cells in the human brain and the cosmic web of galaxies.

Researchers studied the two systems from a variety of angles, looking at structure, morphology, memory capacity, and other properties. Their quantitative analysis revealed that very dissimilar physical processes can create structures sharing levels of complexity and organization, even if they are varied in size by 27 orders of magnitude.

"The tantalizing degree of similarity that our analysis exposes seems to suggest that the self-organization of both complex systems is likely being shaped by similar principles of network dynamics, despite the radically different scales and processes at play," wrote the scientists in their new paper.

One of the most compelling insights of the study involved looking at the brain's neuronal network as a universe in itself. This network contains about 69 billion neurons. If you're keeping score, the observable universe has a web of at least 100 billion galaxies.

Another similarity is the defined nature of their networks–neurons and galaxies–that have nodes connected by filaments. By studying the average number of connections in each node and the clustering of connections in nodes, the researchers concluded that there were definite "agreement levels" in connectivity, suggesting the two networks grew as a result of similar physical principles, according to Feletti. 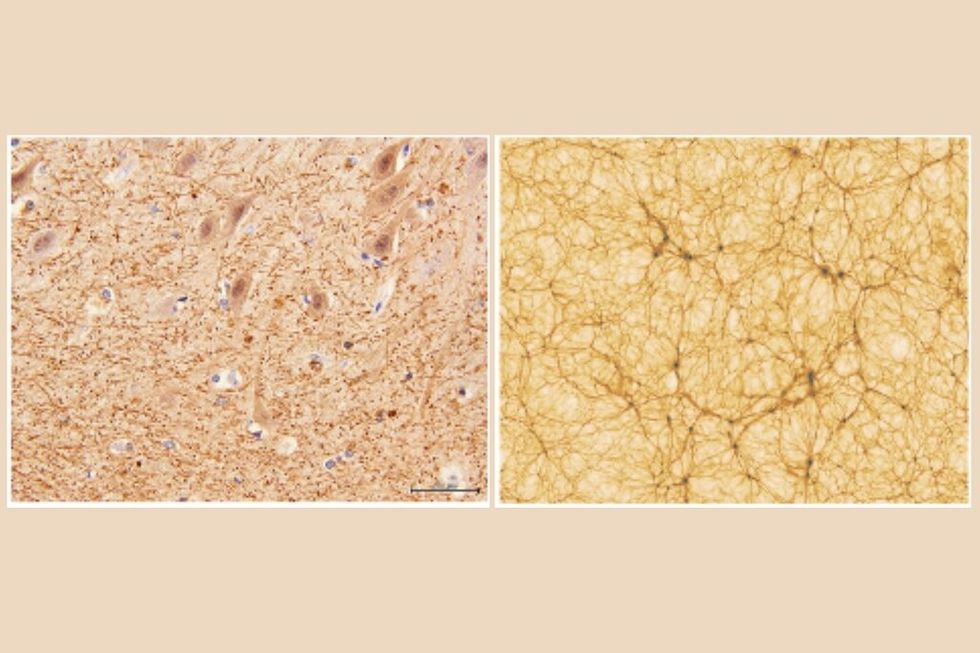 There are also interesting comparisons when it comes to the composition of each structure. About 77 percent of the brain is water, while about 70 percent of the Universe is filled with dark energy. These are both passive materials that have indirect roles in their respective structures.

On the flip side of that, about 30 percent of the masses of each system is comprised of galaxies or neurons.

The scientists also found an uncanny similarity between matter density fluctuations in brains and the cosmic web.

"We calculated the spectral density of both systems. This is a technique often employed in cosmology for studying the spatial distribution of galaxies," Vazza said in a press release. "Our analysis showed that the distribution of the fluctuation within the cerebellum neuronal network on a scale from 1 micrometer to 0.1 millimeters follows the same progression of the distribution of matter in the cosmic web but, of course, on a larger scale that goes from 5 million to 500 million light-years."

Check out the new study "The Quantitative Comparison Between the Neuronal Network and the Cosmic Web", published in Frontiers in Physics.

"Believe it or not, sitting on our shoulders is the most complex object that Mother Nature has created in the known universe. You have to go at least 24 trillion miles to the nearest star to find a planet that may have life and may have intelligence. And yet our brain only consumes about 20-30 watts of power and yet it performs calculations better than any large supercomputer." - Michio Kaku