"We were really protective of how we were going to bring it back," she said.

Class is back in session at Bayside High.

Thirty-plus years after it first aired, “Saved by the Bell” has finally returned, and the new version is a mix of classic characters and fresh faces.

“For years, people have been begging us to do a reboot. Some other beloved shows have had success and some haven’t,” Elizabeth Berkley, 48, told The Post.

“For us, we were really protective of how we were going to bring it back — how could we still honor the OG [show] and what people loved about it, but also bring it to a new reimagining that is relevant for today.”

Premiering Wednesday, Nov. 25, on NBC streamer Peacock, “Saved by the Bell” follows a new group of Bayside High students, along with many returning original cast members whose formerly teen characters are now adults in their world. Zack (Gosselaar, 46, reprising the role) is now the governor of California. After landing in political hot water for closing underfunded schools, he attempts to remedy the problem by sending the impacted students to well-funded schools such as Bayside, causing working-class kids to rub elbows with the privileged. A culture clash — with plenty of comedy — ensues.

Showrunner Tracey Wigfield “had the right take,” said Berkley. “She grew up watching it.”

“Coming from that place of love for it and that reverence, we knew that she would take care of it in the right way and that it would be funny and have a fresh, progressive, new vibe to it.”

“Saved by the Bell” is the latest to join the bandwagon of revived shows over the past few years, including “Twin Peaks,” “Veronica Mars,” “Fuller House,” and “Karate Kid” series “Cobra Kai.”

In the “Saved by the Bell” revival, Slater (Lopez, 47, reprising the role) is now Bayside High’s athletic director reminiscing about his glory days, while Jessie is the guidance counselor. Her son Jamie (Belmont Cameli, one of the new cast members) is a student and captain of the football team. Zack’s preppy son Mac (Mitchell Hoog) is also one of the newcomers, while Thiessen and Voorhies both return as Kelly and Lisa.

“It’s important to devote a lot of the creative to getting to know these new kids,” said Berkley, who’s also a producer on the revival.

“Because everyone already knows us. Different generations have either grown up with us, or I have friends now who are parents who are just showing their kids the show, so it’s like this multigenerational thing that’s been so amazing. But for the new group [of students], we really needed to understand where they were coming from, coming back to Bayside and that world.” 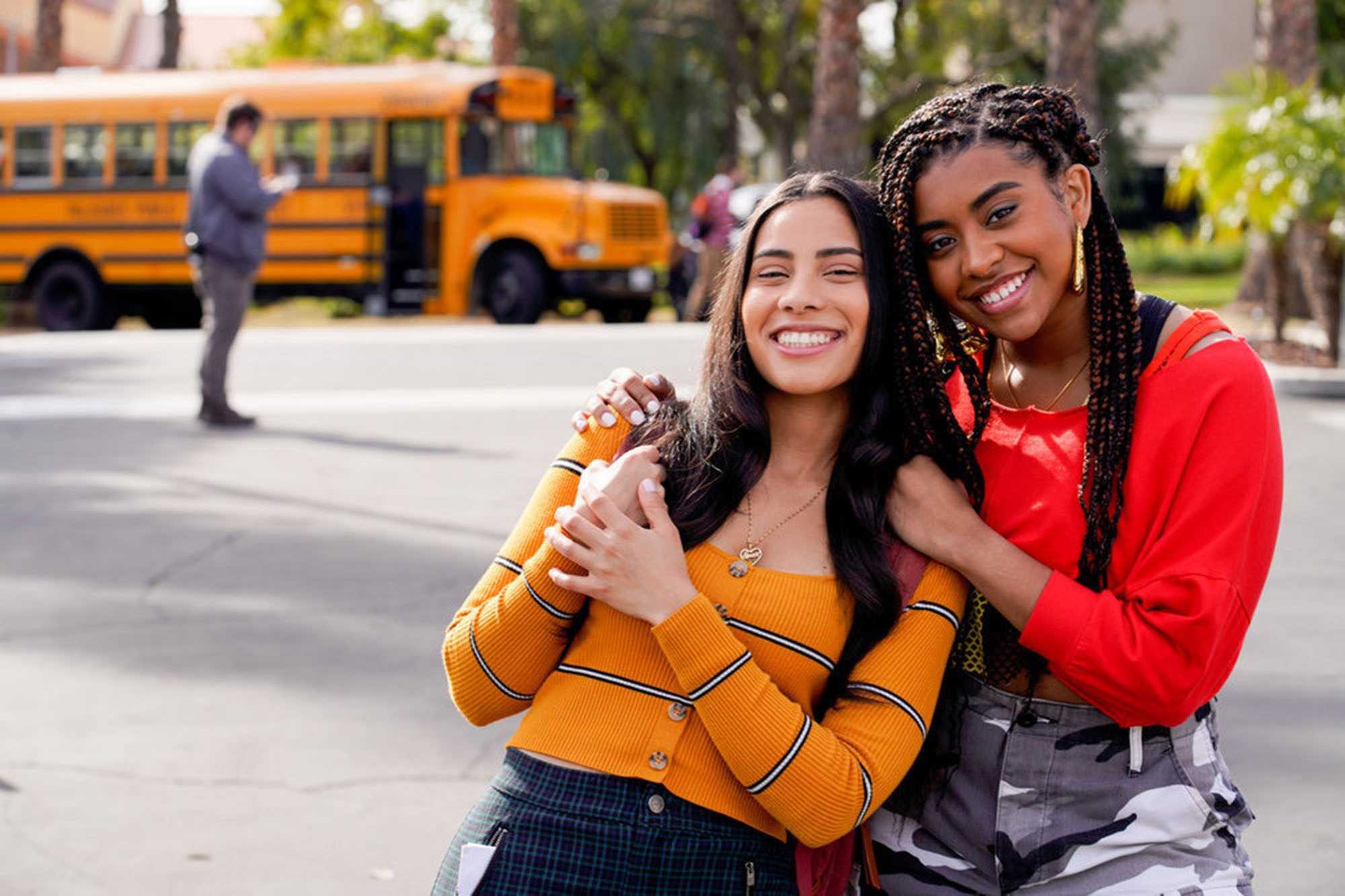 Haskiri Velazquez as Daisy and Alycia Pascual-Pena as Aisha in "Saved by the Bell." 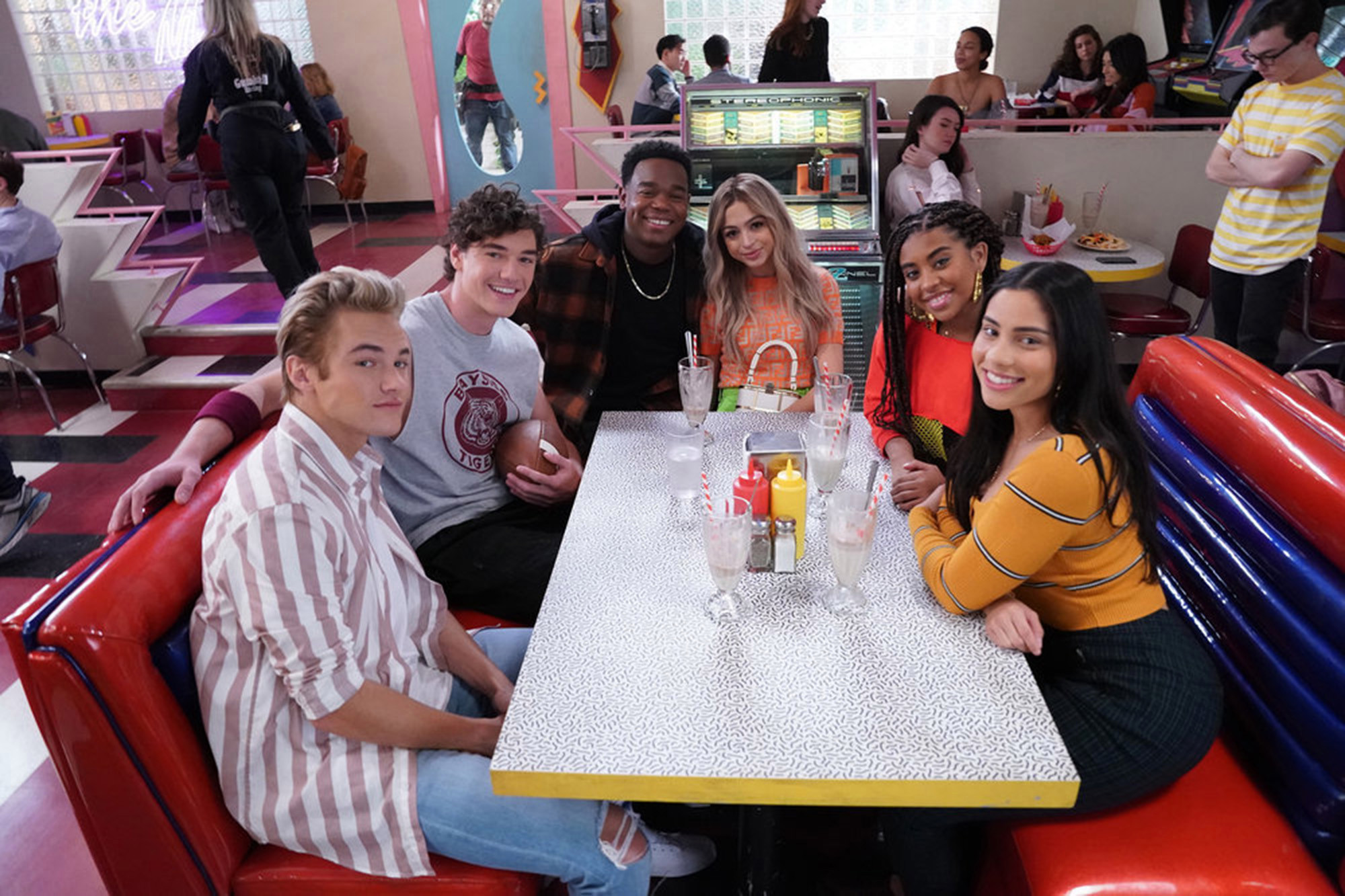 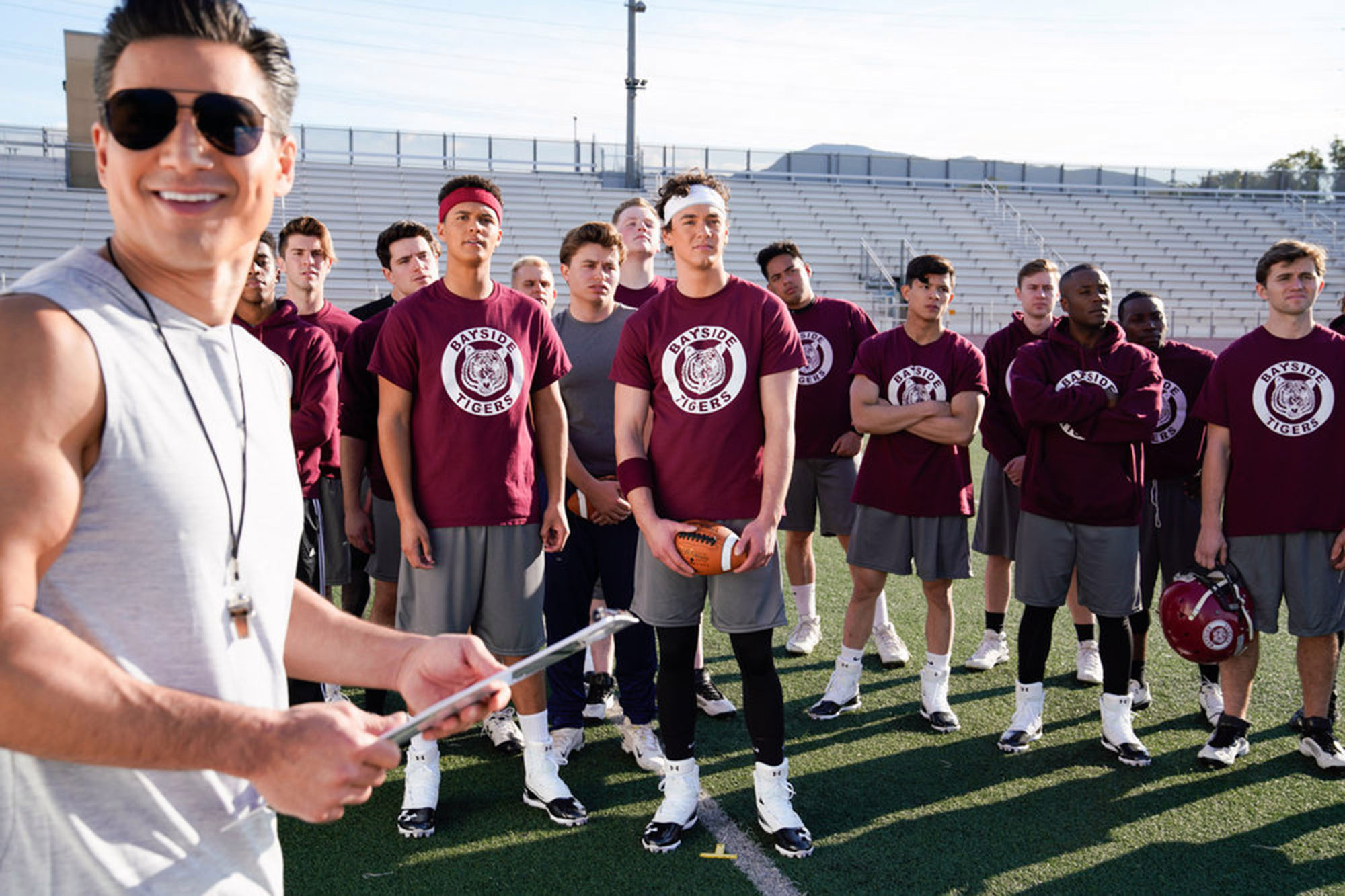 Mario Lopez (far left) reprises his character of A. C. Slater in "Saved by the Bell." 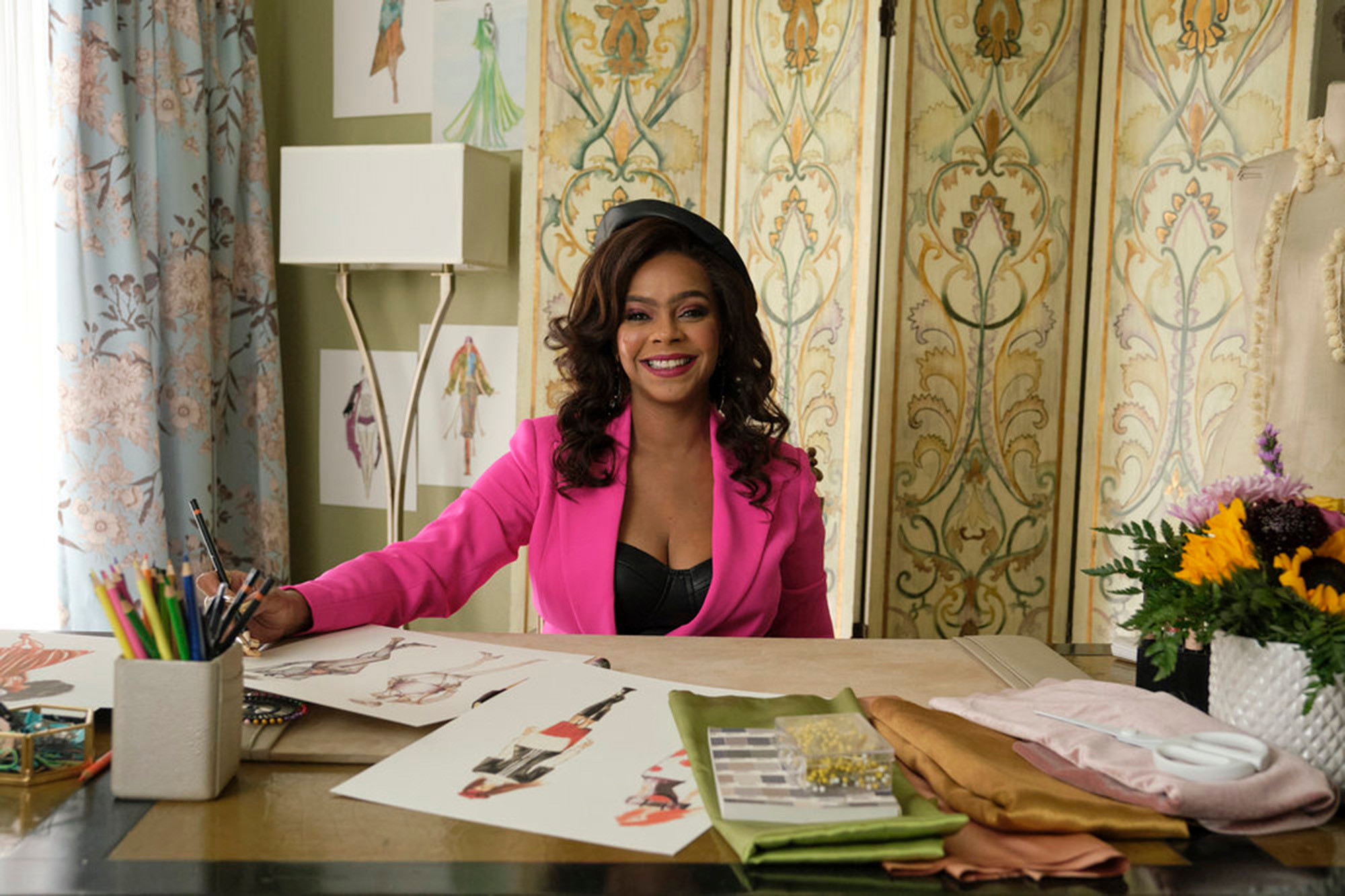 Lark Voorhies as Lisa in "Saved by the Bell." 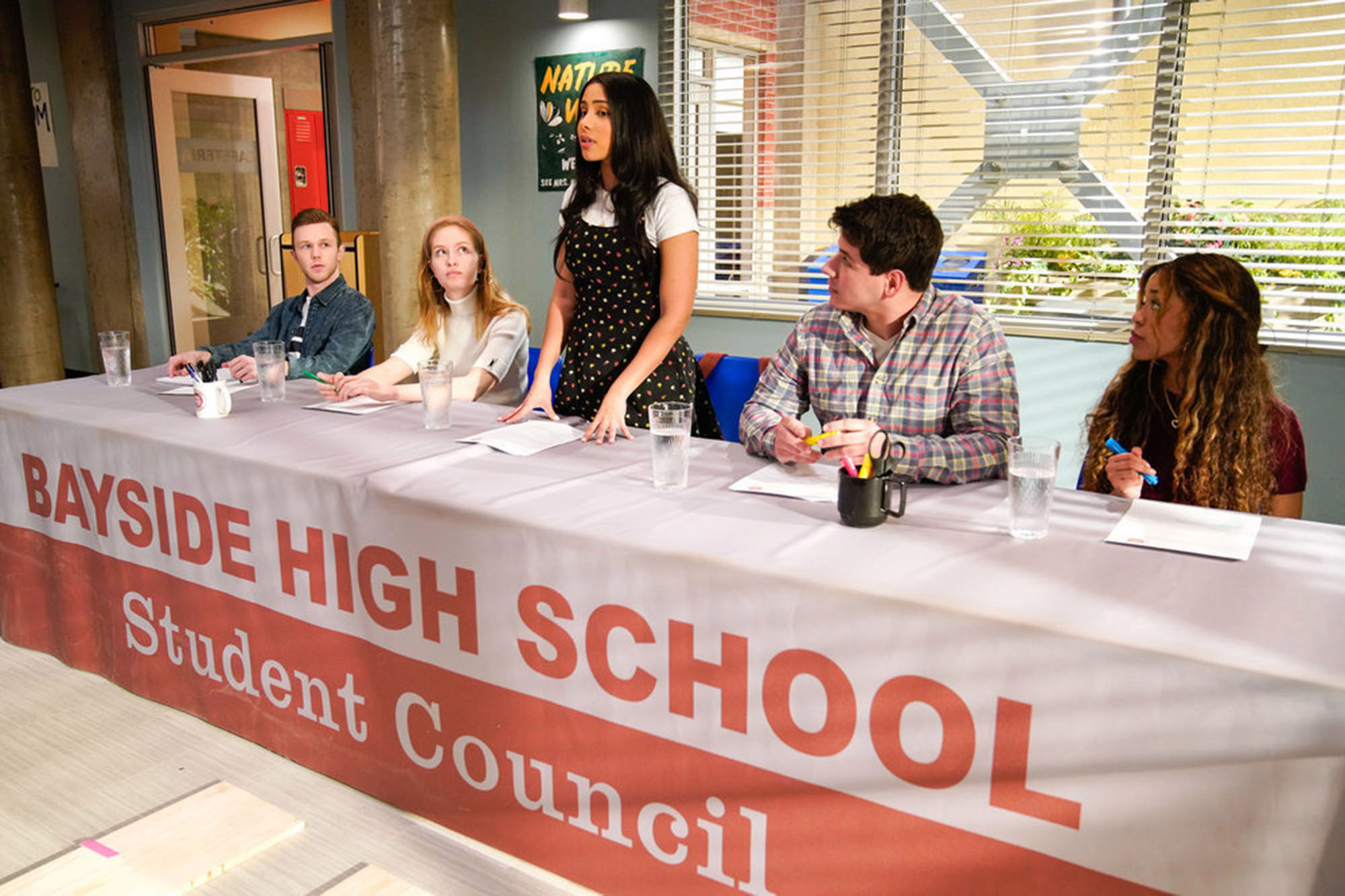 A scene from the "Saved by the Bell" reboot. 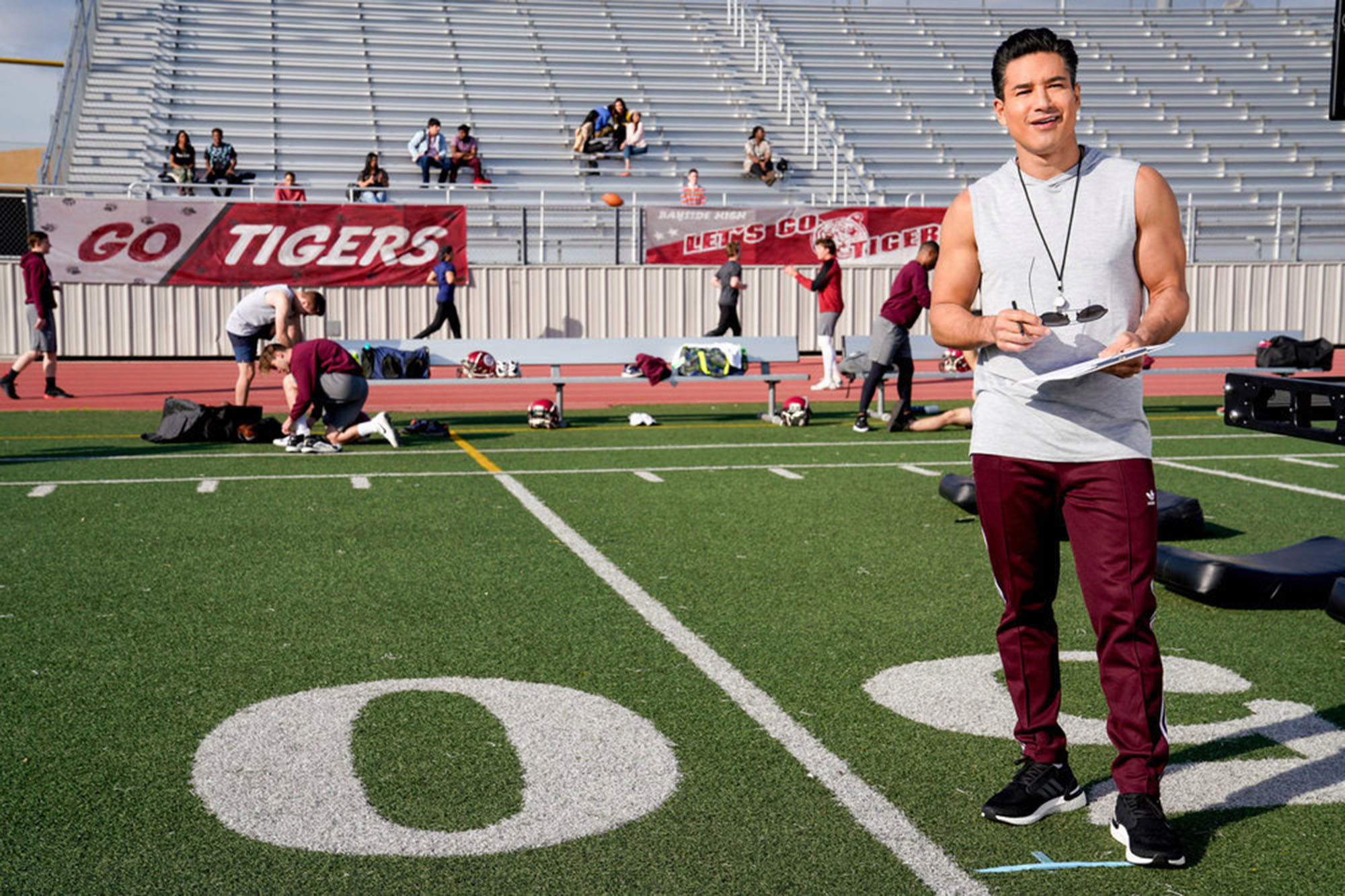 Mario Lopez in the new "Saved by the Bell."

Even though a substantial amount of screen time follows the next generation, Berkley said the nostalgia factor was high. She especially appreciated revisiting Jessie as an adult to see where life has taken her.

“We left off where I graduated high school, and Tracey and I creatively filled in the blanks of what happened in [Jessie’s] life. She has her Ph.D., she’s a New York Times best-selling parenting book author, she has done TED talks. When we come back to her at Bayside, where she’s now the guidance counselor, her personal life is a bit of a mess, even though she has been the success that she always wanted to be in her work. So while she accomplished all these outside things that she dreamed of as a feminist and really being ahead of the game at the time that the original was made — now it’s about some of the emotional life that Jessie is going through. It’s not perfect, and it’s fun to see someone who usually has it down kind of stumble a little.” 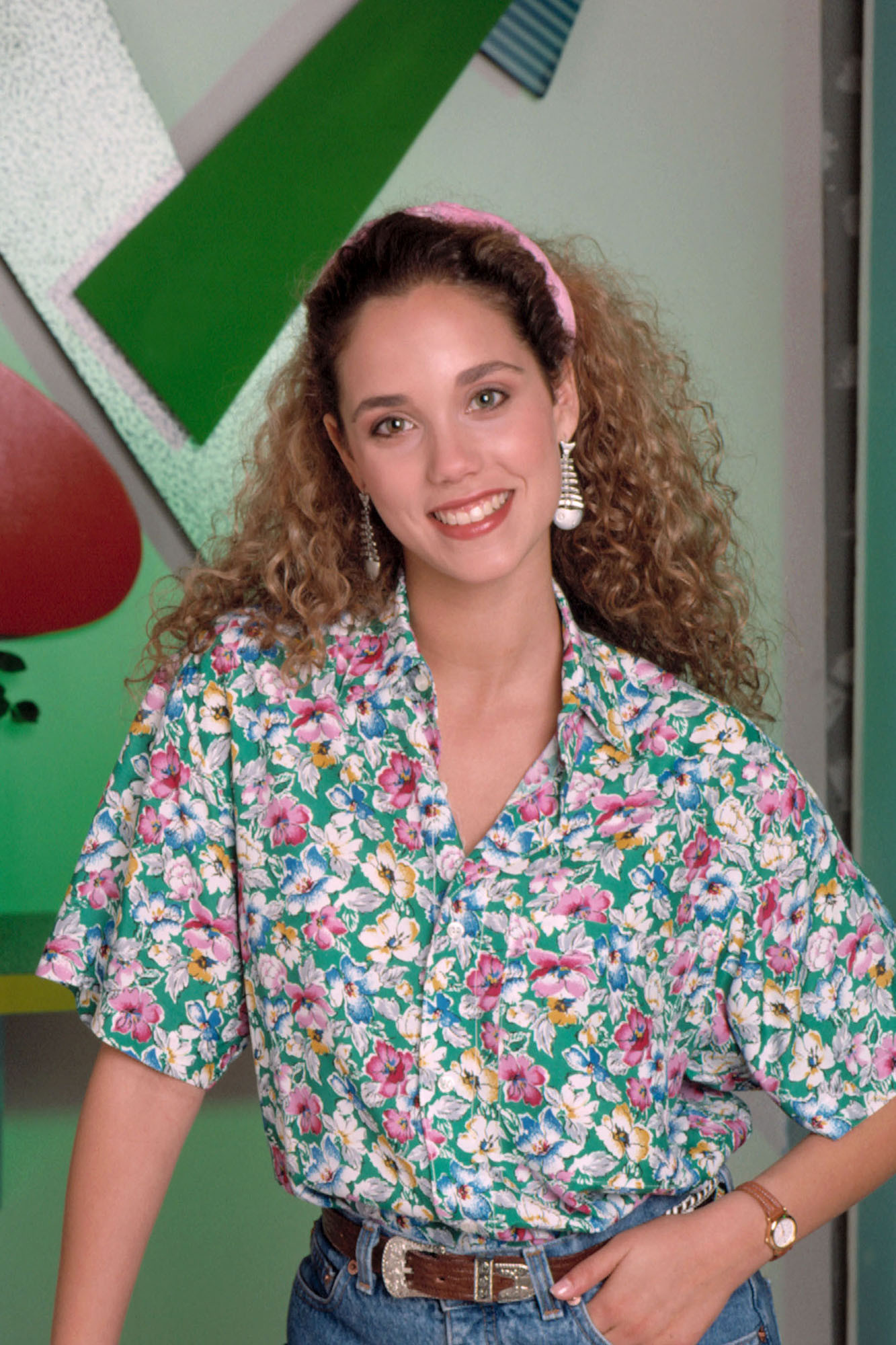 "We were really protective of how we were going to bring it back," said original "Saved by the Bell" star Elizabeth Berkley about the Peacock reboot. 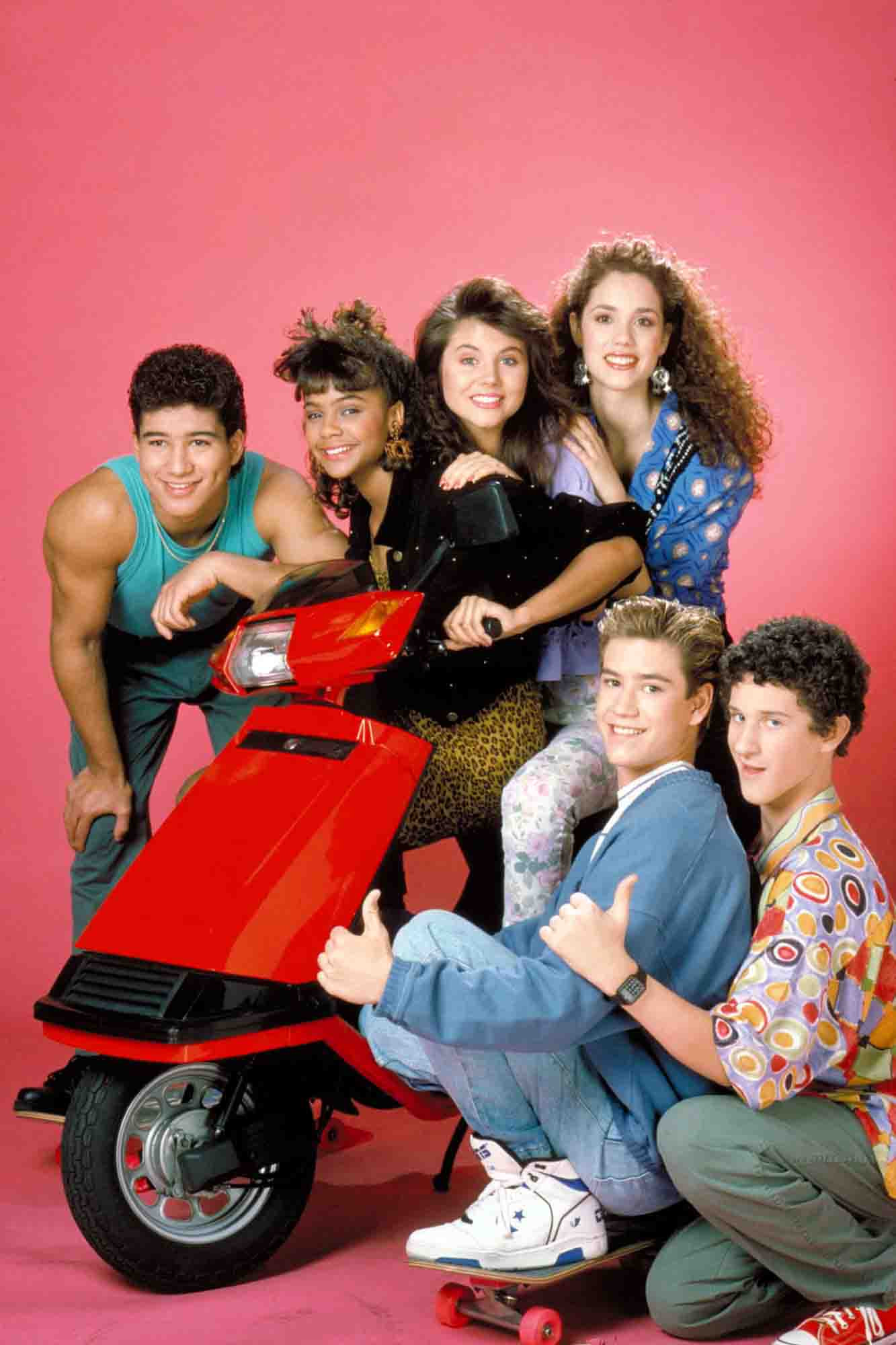 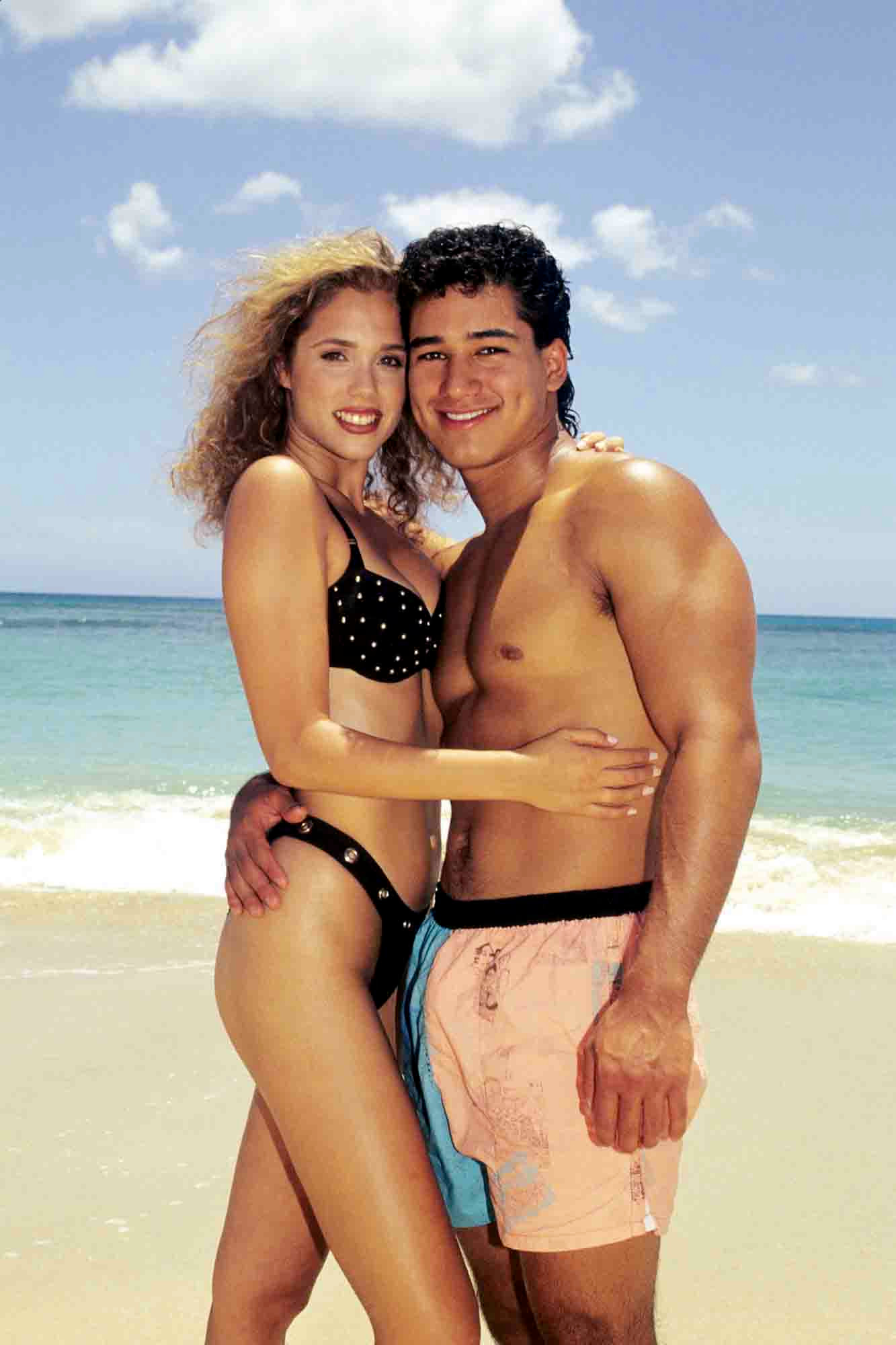 Elizabeth Berkley with Mario Lopez on the set of 1992's "Saved by the Bell: Hawaiian Style." 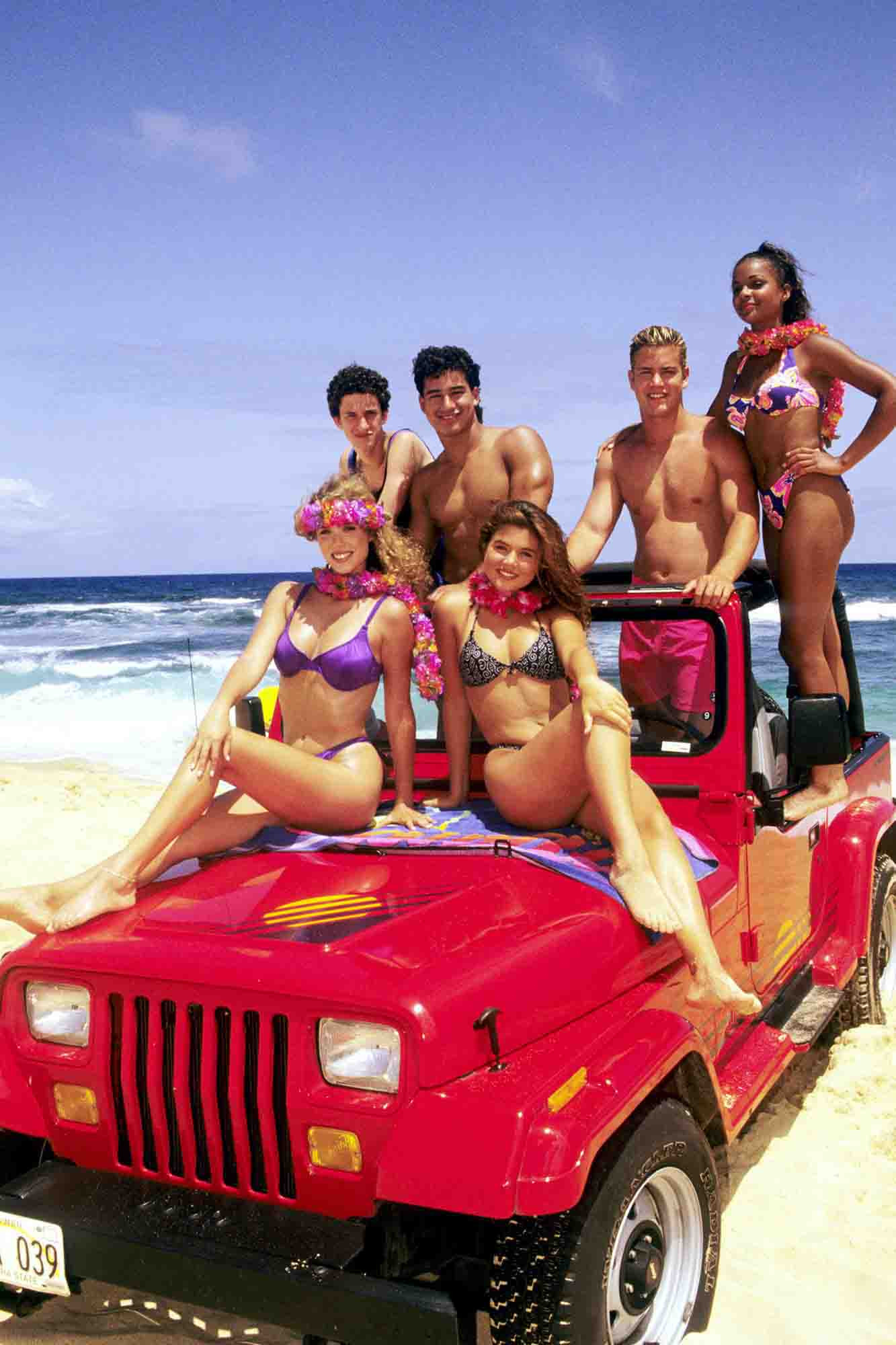 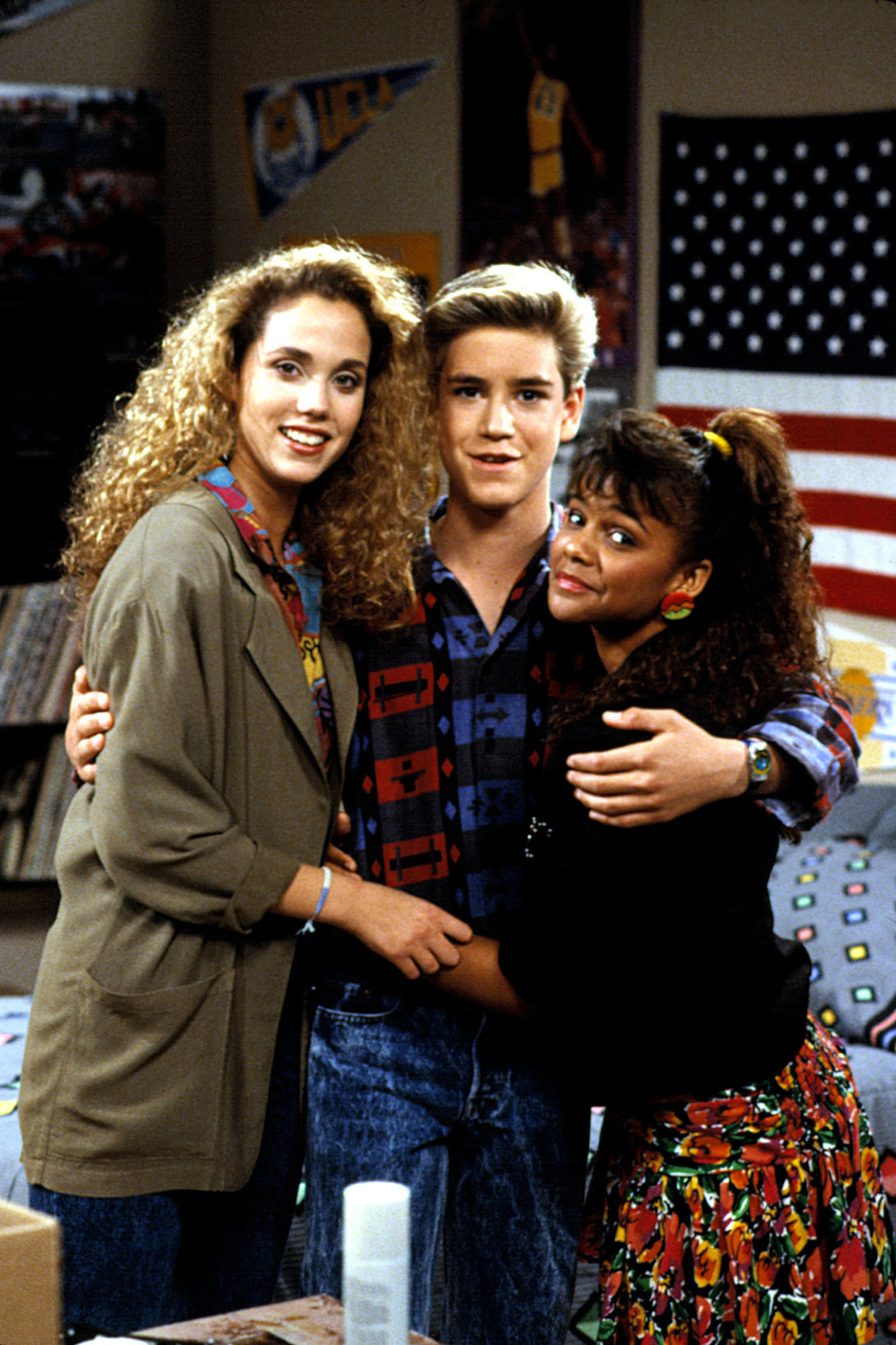 "Saved by the Bell" stars Elizabeth Berkley, Mark-Paul Gosselaar and Lark Voorhies pose for a promotional photo for the original series. 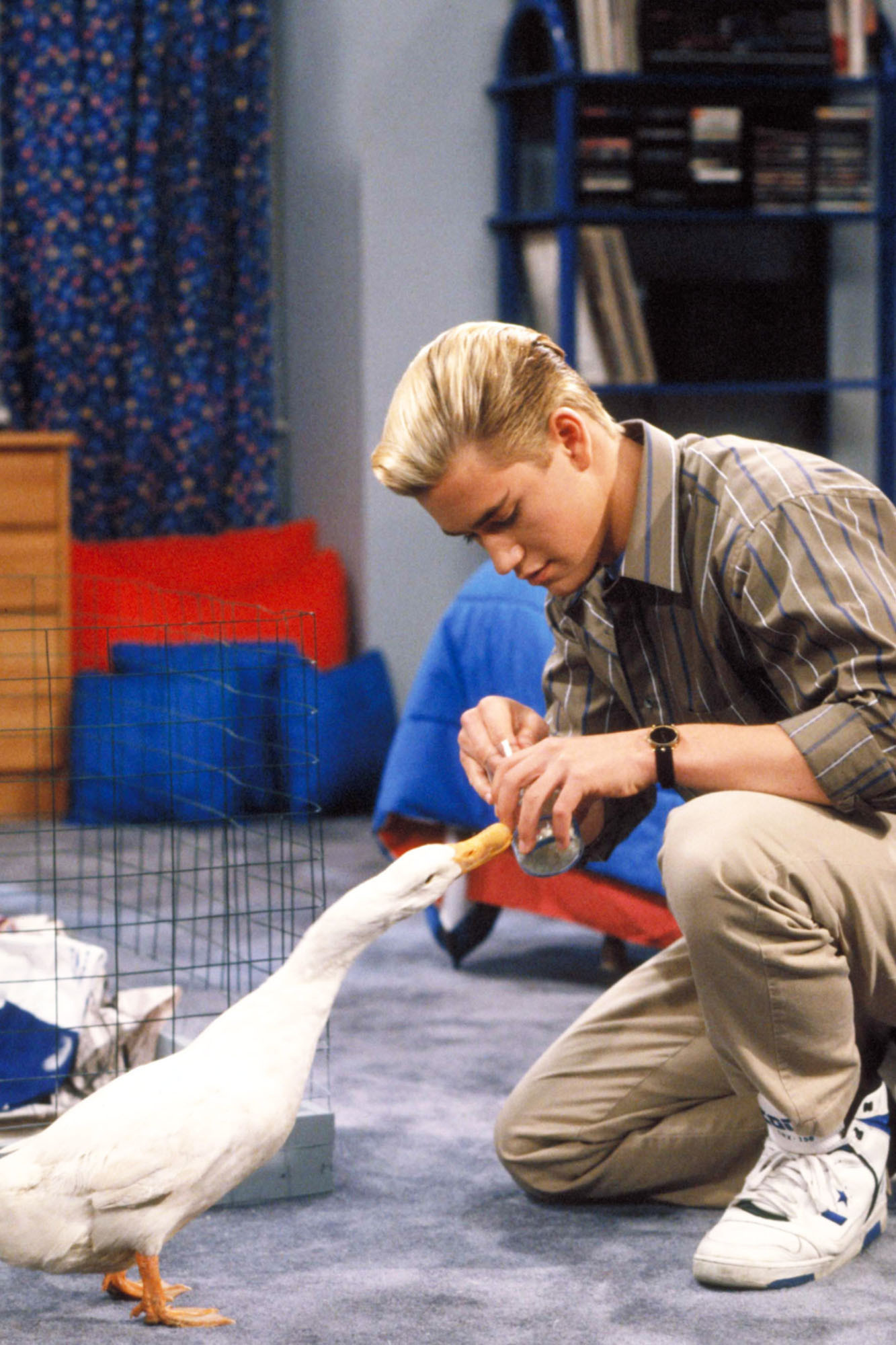 Mark Paul Gosselaar in a scene from Season 3 of "Saved by the Bell."

Berkley says that all the cast members have stayed in touch through the years, but reuniting on set as their characters was still emotional.

“We have a really sweet kind of sibling connection. We were so young when we first started; we were literally the ages we were playing. We got our first cars together, our dreams were coming true together, we shared school rooms together . . . It’s such a rich connection that we share. So to not only see them in real life again — which we do from time to time; I know everybody’s children and spouses — but to then drop into those characters was surreal and amazing.

“We all were so happy. I remember sitting across from Mario [Lopez] for our first scene. Here’s this face that I’ve known for so long, and now he’s a man and a father . . . I feel really proud of everyone and how we’ve grown. There’s a lot of reflection when you get to have a full-circle moment like that.”