Yankees should try to trade Giancarlo Stanton to these two teams: Sherman

Rank the Yankee priorities this offseason. Re-sign DJ LeMahieu. Deepen the rotation. Perhaps find a shortstop and move Gleyber Torres back to second. Before anything else, the Yankees should try to

Rank the Yankee priorities this offseason. Re-sign DJ LeMahieu. Deepen the rotation. Perhaps find a shortstop and move Gleyber Torres back to second.

Before anything else, the Yankees should try to trade Giancarlo Stanton. It could be a non-starter. Stanton has a no-trade clause and has shown no inclination to want to leave New York. But the Yankees should ask and offer two locales — Chicago and San Diego — that could appeal to the slugger.

Stanton showed in the postseason what a force he could be. This season, overall, his chase rate was a career-low 22.4 percent and it dropped to 15.1 in the playoffs. When Stanton swings at strikes, his damage quotient is high.

But all the reasons the Yankees would want to move him make him hard to trade: He is injury-prone, has been reduced to mainly a DH and is owed $218 million the next seven years ($188 million by the Yankees; the Marlins are paying the other $30 million from 2026-28). So the Yankees would have to make a trade attractive to suitors. They should try. Stanton hurts roster flexibility in the short term and financial maneuverability in the long term.

In proposing five deals the Yankees should consider, the first two involve Stanton, both of which only have a chance if the NL adopts the DH moving forward, as it had in 2020:

1. Stanton, $19 million and a prospect to the Padres for Eric Hosmer and Wil Myers.

Padres GM A.J. Preller has shown a passion for the big deal and stars. Stanton is from Southern California and his first preference when he was traded was to be sent to the Dodgers because it brought him home and to a winner. Now, the Padres have the look of extended contenders. So would he say, “yes” after hitting four homers in 19 at-bats in Petco Park in a Division Series loss to the Rays? San Diego is deep in prospects, but the Yankees could offer a bit more to make the larger, longer money more palatable.

For the Yankees, Hosmer is a needed lefty bat and defensive upgrade at first. Without Stanton, Luke Voit could become the full-time DH or be used as trade fodder. The Yankees could try to redirect Myers to an offense-needy team and eat money or take back a contract — possibly to the Cardinals for Dexter Fowler and Andrew Miller, which would cost more in 2021 but are done after the next season. Myers is signed through 2022.

The Yankees would blow by the luxury tax likely in 2021 with this deal, but this is about the roster now and better financial wiggle room later.

2. Stanton and prospects to the Cubs for Yu Darvish, Jason Heyward and Craig Kimbrel.

This one definitely blows up the Yankees’ 2021 luxury tax — but again it is short-term pain, for long-term gain. How much do the Cubs want to lower payroll in the short term (word is a lot)? This saves the Cubs $51 million from 2021-23, including $30 million in 2021. Plus, their underwhelming farm system could pick up a piece or two additionally as a reward for taking on Stanton from 2024-27 ($98 million with the Marlins’ piece removed).

Darvish jumps in as the Yankees’ No. 2 starter behind Gerrit Cole. Heyward is Brett Gardner-esque: a strong corner defender and lefty bat who actually had a .936 OPS vs. righties last season. Kimbrel has been bad the last two years, but in September he threw 7 1/3 scoreless innings with no walks and 13 strikeouts. None of these contracts go beyond 2023.

Should the Yankees try to widen the deal to figure out a way to get switch-hitting Ian Happ, a good athlete who has shown growth as a center fielder? Yes.

3. Gary Sanchez to the Rockies for David Dahl and Tony Wolters.

A change-of-scenery trade. The reputations of Sanchez and Dahl have taken huge hits. For Colorado this would be a gamble for an offense-needy team. The Rockies would hope that outside of New York and in Colorado, where breaking balls don’t break quite as consistently in high altitude, Sanchez will rediscover high-end offense. He costs roughly what Dahl and Wolters would make combined in 2021.

Dahl and Wolters are both lefty hitters and attractively both have one option left. The Rockies very well may non-tender Wolters, but the recommendation is for the Yanks to obtain him and, at worst, stash a high-end defender at Triple-A and find a different major league partner for Kyle Higashioka. Free agent James McCann, anybody?

The Yanks would be gambling that they could keep the oft-injured Dahl healthy. If so, they have a lefty bat with upside (he had an .870 OPS in 177 games in 2018-19) who can play all three outfield positions.

4. Luke Voit and Miguel Andujar to the Marlins for Pablo Lopez.

Miami needs offense, but isn’t going to trade Sandy Alcantara or Sixto Sanchez. Lopez averages a strikeout per inning, keeps the ball on the ground and is not even arbitration eligible yet. If the Marlins make him available for bats, they will draw lots of action.

Which is why the Yanks would have to give up the 2020 home run champ (Voit) plus Andujar (one key question is whether Marlin executives Gary Denbo and Dan Greenlee have high regard for Andujar from their Yankee days). 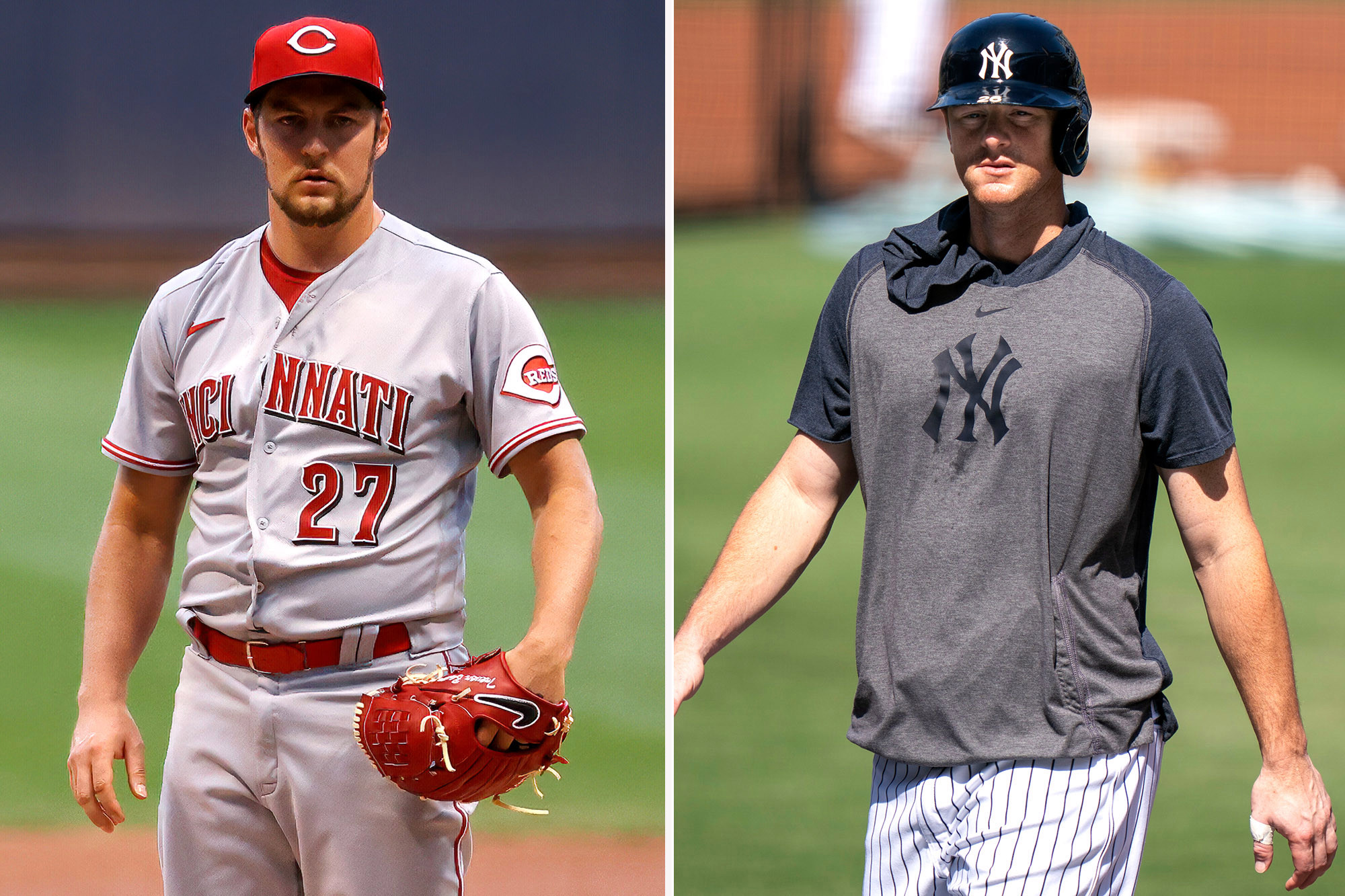 Both of the Mets’ two World Series championships came during...

5. Clint Frazier and Jonathan Loaisiga to the Rangers for Lance Lynn.

The Yanks have remorse after the 2018 season for re-signing J.A. Happ rather than Lynn. In two seasons in Texas, Lynn has gone at least five innings in 45 of 46 starts, leads the majors with 292 1/3 innings and pitched to a 140 ERA-plus. Texas would have to like the upside on Frazier and King because if Lynn is available — because he makes just $8 million next year — there will be lots of interest even in a depressed market. The Yanks would also have to believe there is going to be at least close to a full 2021 season to give up so much control of Frazier/Loaisiga for a player (Lynn) in his walk year.

CoCo Vandeweghe refuses to warm up in ‘unbelievable’ tennis scene

Most Popular This Week
1
CoCo Vandeweghe refuses to warm up in ‘unbelievable’ tennis ...
2
Cowboys trying their hardest to prevent panic after Dak ...
3
Mets sign Josh Reddick to bolster outfield depth
4
Field of Dreams Game: MLB going for once-in-a-lifetime vibe
5
Zack Scott’s dig at Mets players also bad look ...
6
Knicks’ second-round pick puts on show in front of ...
7
Mets rally past Nationals for skid-snapping win in Game ...
8
Everyone needs to relax when it comes to Zach ...
9
Nate Burleson in line to host Super Bowl after ...
10
Yankees overcome growing COVID-19 outbreak to hold off Royals